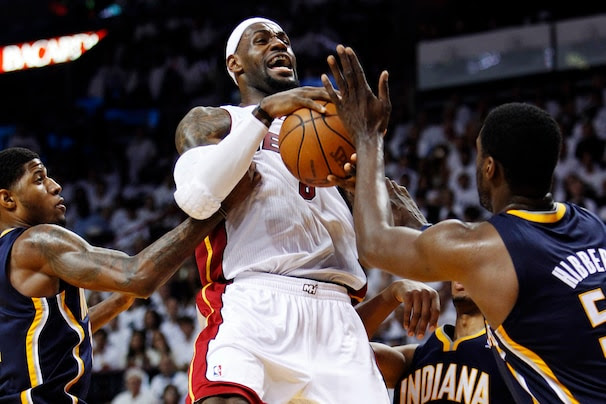 Does this really need a caption, guys? 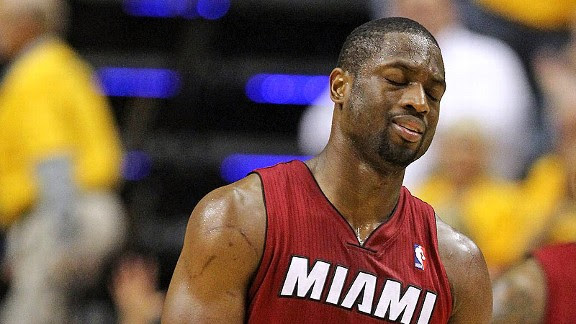 Not for long though, thanks to a 17-3 run to start the 3rd...and Dwyane Wade having little to celebrate after a rather lacktive-sounding 2 of 13 from the field, finishing with not one, not two, not three, but FIVE whole points.

Sure, D-Wade reflected on his paltry performance, but why don't we quote ESPN's Michael Wallace:

Wade missed his first five shots and was held scoreless in the first half for the first time in 95 career playoff games. His first basket came on a jumper with 10:22 left in the third quarter.

Hired talking head, er, "coach" Erik Spoelstra even got to experience a little bit of Wade's wrath, in a third quarter argument:


Not only did Wade's frustrations take the Heat out of their offense, as he attempted to fire his way back into his typical box-score prominence, but his failure to get back on defense and (at times) go over the top on Indiana's screens drew Spoelstra's ire.
Not that their third-quarter "conversation" was troubling the Heat coach.

Aaron said...
After Heat gets knocked out, will ESPN launch "Simulated Heat Reaction Grades" from the NBA2k12 games that the biased journal Tom Haberstroh play on his xbox?
5/18/2012 10:59 AM

Barry said...
Spoelstra seems to let Wade off easy, then again I guess it's not smart to punish one of your aces in the middle of the series.

Anyone else not watching the Spurs series? I have no affiliation to either team and I love the Spurs' team basketball but there's no tension as you just know the Spurs are going be done with LA quickly.
5/18/2012 11:24 AM

Wormboy said...
"...finishing with not one, not two, not three, but FIVE whole points."

Well, I've said for a long time that in addition to luck, injuries are also an expression of training and preparation. In other words, champions are also durable suckers who work like crazy to stay fit and prevent injuries. If Chris Webber had had better training habits, he'd have probably been a champion. Had Tracey McGrady had any work ethic to speak of, he'd have gotten out of the first round at some point (and maybe avoided the endless knee injuries). Kobe DOES have exceptional training habits, and we see that he has unusual success and longevity as a player. So did Jordan.

To a certain degree, you make your own luck.

So, let's not hear any excuses for the Heat. Odds are they won't be champions this year. While some of that is bad luck, it's still on them. If they had any role players of note, maybe there'd be fewer minutes and less wear on their bodies this year. You don't hear the decrepit old Spurs complaining, do you? You don't hear Garnett complaining as he cranks out throwback playoff games. You make your own luck. So sorry, Heat. Maybe next year.
5/18/2012 12:44 PM

Naz said...
This is why I hate basketball more and more everyday


Lebron James was the only Heat player in the last game that actually played better than complete shit and he's the one that's being called a choke artist when Dwayne Wade had the single worst playoff performance of his career.

Silvio said...
Heat with terrible bench yet again. Battier completely lost his step. He used to be defensive juggernaut, in this playoffs Melo made him look silly. Mike Miller, injured or not (though he's always injured) , couldn't hit an ocean even if his life would depend on it. Others are who we thought they are. Boshtrich and Chalmers had random good games ... but they're starters, so thin Heat is. 2 Micheal Jacksons and 10 Titos.
5/19/2012 4:23 PM

Anonymous said...
So, yeah. I don't like the Heat, but this place and other blogs really hate on Bosh for no reason at all. It was obvious that Bosh was the most important player on the team because Wade can replace Lebron decently, but no one can replace Bosh. When Wade was out, Bosh averaged something like 24/8 on over 50%.

This blog doesn't even update that often, but when it does, it just sounds very butthurt most of the time.

@Wormboy: Now you're implying that Bosh is lazy because he suffered an ab strain? Hating the Heat is just really sad at this point. Even with Bosh, they would have probably lost to the Spurs in the finals, anyway.
5/20/2012 1:09 AM

TeamD said...
This place is officially dead! Was a great site, now its depressing to check back for updates every time.

Thanks to raza and others who try but it will never be like the old times.

If the Heat is the Jackson Five (slightly altered), what does that make the Spurs?

Wormboy said...
OK. FIrst Wade says he's been playing injured for the last month, and that's what explained is horrible showing in game 3. Even though his numbers don't go down while playing with this "injury." He blows in the start of game 4, then once he gets rolling, he plays great (assisted, as usual, by officiating that doesn't allow anybody to tough him in the most physical playoffs in years).

Naz said...
Wade can't do that Wormboy. People give Lebron shit all the time but the Heat player with the most attitude that spews the most bullshit is far and away Dwyane Wade
5/21/2012 3:03 PM
Post a Comment
<< Home
Subscribe
RSS Feed
Mailing List