Minnesota Timberpups:  In case the Pups were unclear on the concept, allowing your opponent to score twice as many points as you do is never a good thing. It's not often that you let the other team's starting unit all finish with a higher +/- than the number of minutes they played, but that will happen when the score is 64-30 at halftime. The combined +/- of the Indiana starters was +153! Minnesota was down by 25 points after only nine minutes of play.

Tyler Hansbrough/Leandro Barbosa: I could have put the entire Pacers bench here, as they combined to shoot 11-for-36 (the starters were 28-for-52, by way of comparison), but these two sparkplugs shot 5-for-21, committed five fouls and turned the rock over five times. Despite scoring four points and pulling in four rebounds, Hansbrough still almost had a Voskuhl.

David West, pulling no punches quote:  "...especially when you're dealing with teams that don't have anything to play for this time of year, like the Timberwolves."

Philadelphia 76ers:  From early-season darlings to late-season collapse, the 76ers are on a freight train going the wrong way. They haven't beaten a decent team this month and followed up a home loss to the Nyets with a double-digit defeat to the Howard-less Magic, getting outrebounded 46-30 in the process. What was worse was the Philly defense allowing Orlando to shoot 11-for-18 (61%) from the three point line.

That's all Orlando can do! Can't anyone close out to the three point line? Sheesh, it's like being in a Scooby Doo cartoon and never pulling the mask off the bad guy. 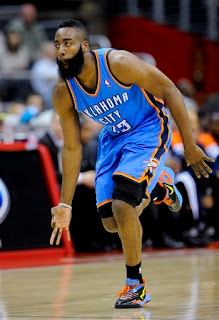 Toronto Craptors:  A 22 point loss at home? With Ben Uzoh getting significant minutes? Must be tankin' time!
If only we had some kind of gif that would encapsulate the struggles the Raptors had tonight. If only...

Atlanta Hawks:  Sure, you may have won, Atlanta, but you had plenty of bawful. Being outrebounded (including giving up double digit boards to the aforementioned 6'3" Uzoh) is one thing, but you shot 6-for-21 from three point range and bricked 11 free throws.


Hornets/Bobcraps:  Ho. Lee. Crap. This was bawful at it's finest. It was like a Null-Star Game that counted (but only because every team is legally required to play 66 games that "count").
It was like Charlotte was playing a game of 'whatever you can do, I can do bawfuler'. New Orleans shoots 33.8% from the field? Never fear, here comes the Bobcraps bench, shooting 3-for-23 and dragging down the shooting percentage to 30%. New Orleans goes 1-for-11 from distance? Charlotte doubled down on the suck and shot 1-for-16. Seriously, were these guys playing by some bizarre Aztec Ball Court rules where they had to try to put the ball through the hoop without using their hands?

Charlotte also bricked ten free throws. Neither team scored more than 35 points in the first half and they combined for 20 points in the third quarter.

The Phoenix Suns scored only 17 fewer points in their game against Portland last night than these teams scored put together.

Gerald Henderson, unclear on what 'good' means:  "The Hornets are a good team, but we look at them as similar to us."

Gerald, if you're describing a team as 'good', they are not, in any way, similar to you.
If you want a full detail on the bawful in this game, just look at the AP Recap. It's like they're stealing my material (or maybe the other way around).

Nyets "fans":  With James leading the comeback, Nyets fans decided to stick it to their team, chanting "MVP! MVP!" as well as "Let's Go Heat!".
They do know that James isn't a free agent any more, don't they?


Chicago Bulls: Rose or no Rose, Deng or no Deng, losing to the Generals at home is not something that playoffs teams do. And I don't mean that figuratively. Here's a list of teams that the Generals have beaten on the road this season:
Charlotte
Detroit
Portland
New Orleans
New Jersey
Charlotte (again)
Chicago

Chicago coughed up the ball 17 times for 27 points the other way. Washington had 10 TIMES as many fast break points (20-2) and crushed the Bulls in the paint 48-22.


Tyrone Corbin, benevolent coach:  There's giving your stars a lot of minutes, there's treating your stars like Kurt Russell treated the US Hockey team in Miracle (again. blow the whistle. again. again.) and then there's Tyrone Corbin, playing his starters a combined 259 minutes in a triple overtime game. If my math is correct, that left 56 minutes for the rest of the team and the starters AVERAGED 52 minutes. Of course, it's not like the Jazz have been playing a lot of games lately. They're only at the end of a "six games in nine nights with every game in a different city" stretch. Egyptian Pharoahs sent Corbin a text this morning saying that Corbin might have been working his players a bit too hard.

Thanks, NBA Lockout! You're the best!


Portland Fail Blazers:  Hey guys, I know you're just playing out the string and all, but 60%?!?!?  If you take out the upright corpse of Michael Redd, the Suns shot 50-for-78 against you tonight? That's like 121% for the game. And it's not like Nash was torching you. He was only 3-for-6. No, you were getting punked by Bassy Telfair and Markieff Morris. Not to mention the Suns starting frontcourt, which shot 24-for-34.

There were only a total of 30 rebounds grabbed at your end of the court, Portland. Funny, I would have thought giving Thabeet double digit minutes would have helped that situation. Who knew?

Golden State:  Due to the "effort" the Warriors gave (trailing by 15 after one quarter and 21 by halftime), Coach Pop got to use his middle school rotation (everyone plays the same amount of time). All 12 Spurs played, from Timmah (11 minutes) to Gary Neal (25 minutes). Even Patty Mills saw 17 minutes of court time. That's like a month's worth.

The Warriors must have been excited to see some of these guys, because they were slapping everyone's back, hands, faces, whatever they could find. The home team racked up 31 personal fouls and sent the visitors to the line 43 times. I didn't realize that it was "opposite home cookin' day" in Oakland yesterday.

If starting four rookies against San Antonio isn't a sure sign that you're tanking, I don't know what is.


Chris' THE CLIPPERS ARE IN THE PLAYOFFS Monday lacktion report:

Hornets-Bobcats: Charlotte's Matt Carroll bricked thricely (twice from the Duke Energy Center) and also fouled and lost the rock once for a +5 in 13:29!!!

Mavs-Jazz: In triple overtime, Brendan Haywood botched two boards in
20:47 as starting big man with three bricks, three fouls and a turnover for a 4;2 Voskuhl. Brandan Wright bid adieu to a board in 6:12 with a foul and turnover for a 2:1 Voskuhl. And Brian Cardinal fouled once by contacting a Koopa Troopa in just 19 seconds for a Mario and +1.

For PLAYOFF-BOUND Lob City, Trey Thompkins earned his own +1 via brick in that timespan, while Bobby Simmons can now collect rent along with Donald Sterling with his own 1.1 trillion.

Anonymous said...
The Bawful game of the year might be this coming Monday, BobCraps vs. Generals/Wizards. Nothing is on the line, and this game is for none of the marbles.