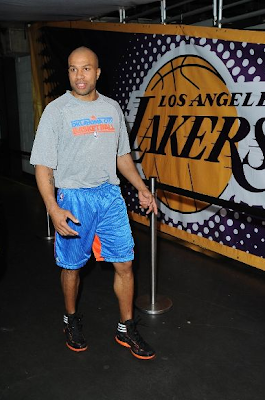 Derek Fisher: Minutes before security told him he was headed to the wrong locker room for the third time today. Coach Vogul performs an opera just prior to busting out into a Salsa dance.  His tie failed in its attempt to strangle him. 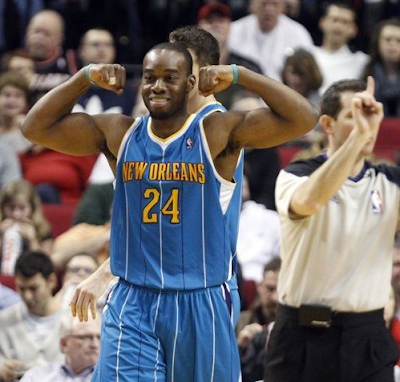 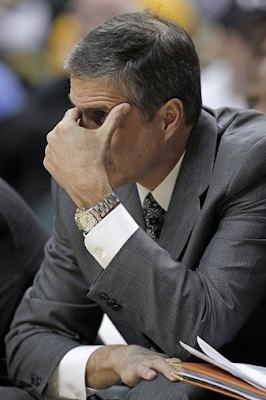 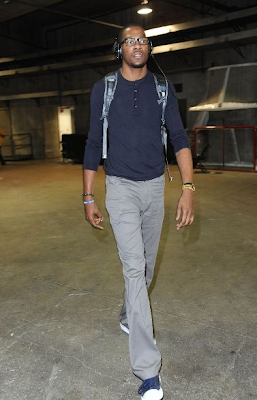 Gumby has entered the building

Miami cHeat:  Yes, they won, dressed in all black jerseys looking like complete assholes villains.  The Mavs had a 5 point lead at the end of the first, but Miami turned up the....well heat I guess...to take a 7 point lead at halftime and never looked back.

Dirk played well scoring 25 points to go with his 6 rebounds.  However, the real culprit is none other than Jason "Stolen Kenny Smith Nickname" Terry.  Once a huge help in Dallas's quest for their first title last season, the mongoloid went off...or south for 1-10 shooting.

When asked about his horrible stat line Terry merely responded with:

"We just worked our habits," LeBron James said. "The best thing about tonight, we didn't take another step backwards like we did the last two games. And it was good to see."

He also added "We're saving all of our backward steps for June, and not just for our Achy Breaky Heart dance routine either"


Also to note, Wade finished with just as many FT attempts (9) as the entire Mavs team got (13).


LeBron James Headband/Receding Hairline:  While this topic isn't anything new or exciting, it's hard not to notice Lebron's headband getting bigger and bigger and bigger.  Lebron went to South beach but his hairline is trying to go back to Cleveland.

I mean, what next? His headband will grow to be so large we may as well see LeBron look like this for the 2014 Season: 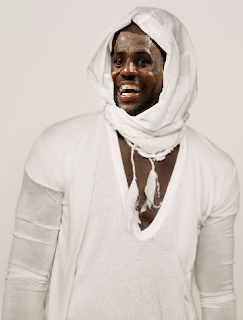 Minneapolis Lakers: Yowza, what looked good in the first half for the Lakers, a 12 point lead and the Bynum/Gasol tandem working to perfection got completely derailed as the game went on.

The LakeShow allowed the Thunder to shoot 46% from the floor, and despite Harden going a weak 3-11 from the floor (to rival Pau's 4-11) OKC ran away with it building their lead to as many as 19 before Los Angeles tried to save face in the end.

Bynum was fantastic going 10-15 from the floor, as the Thunder had no answer for him.

When you're able to shoot 66% from the floor, you'd think you'd be allowed to get up more shots, maybe even a 3 pointer or two.

But then, the Lakers got Kobe'd.

The scene of the crime shot 7-25 from the floor, for a whopping 28% from the floor (which probably raised his FG percentage on the season).


You gotta admit, Kobe is simply fascinating.  It's getting to the point where should my Spurs face the Lakers in the playoffs, I secretly pray Kobe takes as many shots as possible.

I tried to analyze Kobe, study Kobe, become Kobe (even had my lower jaw surgically extended and everything).

This is what I found: 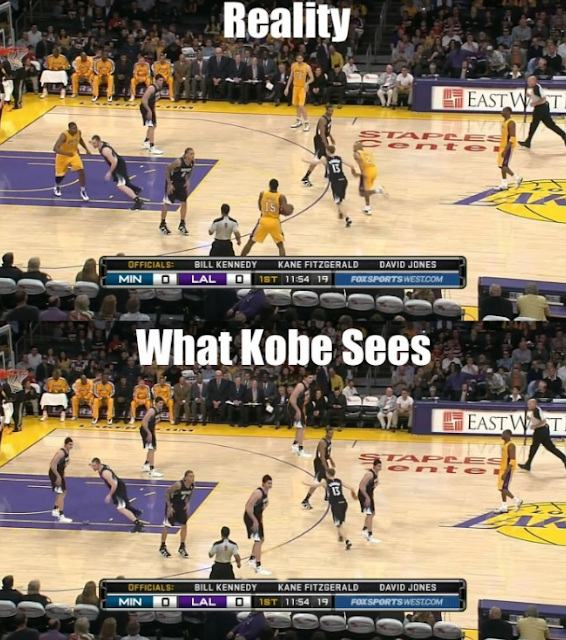 Oh, and have I mentioned that Derek Fisher had just as many points in 16 minutes (7) as Razor Ramone Sessions had in 30?


Bawful Twitter Account of the Day:  As if going 3-13 from the floor isn't bad enough, these tweets could make anyone scratch their head in amazement from Metta World Please: 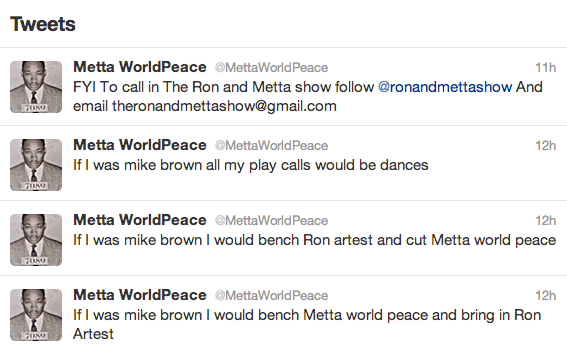 Pacers/Wizards Generals:  On a night where you had some great matchups that had everyone talking with your Heat and Laker games, the NBA decides to schedule this game on the same night.
You know when you're seeing that one band you've been waiting your entire life to see?  Your waiting in anticipation.  And as you're waiting, maybe at a festival or something, some awful band takes the stage and everyone is just standing there with their arms crossed and waiting for them to get the hell off ?
Well this game was that band.
To give an even better example, when the Wizards are in town, it's just like giving someone polite applause even if on the inside you wish they had never shown up at all.
Kinda like this classic Curb Your Enthusiasm clip, where Sammy is the Wizards, and Larry David represents the entire NBA fanbase.....I guess that would make Suzie John Wall's mother:


Sixers at Generals: The Sixers aren't worried about falling into a tie with Boston, why? Well damn man, just take one look at who they've got next to regain the division lead.


Heat at Craptors: The adrenaline rush for the Heat going from playing the Mavs to playing the Craptors is the equivalent of banging Betty Draper one night, and then Rosie O'Donnell the next.


Knicks at Hawks: One of these teams is in the bottom ten in the NBA for points per game, rebounds per game, and has now lost back to back games.....and the other are your New York Knicks.


Bucks at Cavs:   Who better to ask for a preview of this game then my buddy Mike Dunleavy.  Whatcha sayin' there Mike? 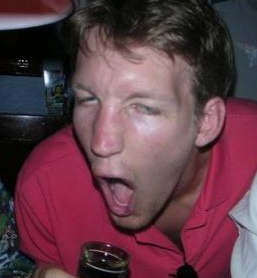 
Pistons at Bulls:  They'll say Derrick Rose is injured for this one, but really, he just wants nothing to do with preseason type games.


Grizz at Rockets:  Memphis has averaged 88.4 points on 41.3 percent shooting during the 11-game skid in Houston  *changes channel*


Celtics at T-Wolves:   Garnett comes home.....only to see Kevin Love threaten to take his spot as one of the great PF's to ever put on a Timberwolves Jersey  (third place is Joe Smith)


Mavs at Magic:  Dallas is going to send Dwight a fruit basket for increasing their chances ten fold for landing Deron Williams this summer.


Paupers at Jazz: Something tells me that Sacramento's road woes will continue.  Just a hunch.


Nyets at Warriors:  At least Oakland should be relatively warm this time of year.

Lakers at Hornets:  Well that's one way to recoup from losing to OKC

Bobscraps at Pistons:  The box score says that there will be a winner, but really, everyone who witnesses this loses.


Grizz at Bucks:  Hopefully Mike D recovers from his all nighter in time for this one

Pacers at Spurs:  George Hill comes back to the team that traded him for the guy who is already ten times better (Kawhi Leonard).


Nyets at Kings:  Dud game of the night!


Jazz at Flippers:  I can see the Jazz stealing this one.

Bulls at OKC: Man do I hope Rose plays in this one.


Magic at Nuggs: Hopefully Dwight doesn't let that thin air in Denver get to his head...or maybe it's already too late


Generals at Craptors: The NBA: Where Making Sure You're Asleep by 6 PM Eastern Happens


Hornets at Suns:  While I'd love to see Nash get out of Phoenix to move on to bigger and better things, I would hate if the rumors of him considering the Heat turn out to be true.


T-Pups at Jailblazers: Aldridge vs Love always makes for a great matchup....the rest of the roster on these teams......not so much


Warriors at Lakers:  What's the over/under on Bynum attempting another 3 against the Warriors?


Generals-Pacers: Washington's Brian Cook fried up a mushroom in 6 seconds for a Super Mario!


Mavs-Heat: Brian Cardinal crammed in a collection of startups worth 3.05 trillion (183 seconds), while Yi Jianlian bricked twice and took a rejection in 153 sceonds for a +3.


Thunder-Lakers: Troy Murphy muffed one shot attempt in 394 seconds for a +1.

I was going to give you a kudos for your continued input on this site, Raza, but then you called my team the Jailblazers.


Personally I really would like to see your Spurs go against my Heat in June, that would make for some great basketball to watch.
3/30/2012 8:20 PM

Raza said...
Reid, you're right, they haven't been the Jailblazers since they gutted the team in the mid 2000's.

I just give most goofy nicknames in the write-up, never anything personal.

Naz said...
I think that what happened last year will happen again this year in a Heat/Bulls matchup, because the reasons that the Bulls lost last year haven't been addressed. There is still no great second scoring option for the Bulls, Rose has to do it all and he's missed a lot this season. If the Chicago bigs can pick up the slack, the only obstacle they have is the Boshtrich. I think that's a big if though.
3/30/2012 10:50 PM

Barry said...
Anyone else see the Knicks - Hawks? There was a moment after Josh Smith got the alley-oop pass that he converted with a lay-up of sorts and after that there was some guy in the crowd doing a high five with the guy next to him, and the guy next to that was left hanging.

Anonymous said...
I'm following this site for years but I haven't been able to find any time to read this site for a while. So my question is, what happened to Matt McHale?

Raza said...
Matt is busy with the real world as well as running the Bulls by the Horns blog: http://bullsbythehorns.com