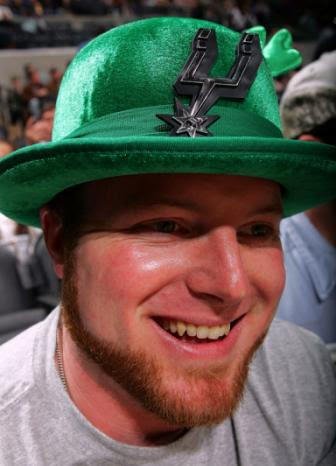 Jeremy Richardson: He played only 10 seconds and, of course, went zero-for-everything. Makes sense, since I can't even unwrap a stick of gum in 10 seconds. Super Mario West -- who actually got onto the floor for a buck and some change -- said: "I feel your pain, bro."

DeShawn Stevenson: Al Horford gave him a little of The Mutumbo Treatment in the fourth quarter of Washington's home loss to the Hawks. Watching him flail around in an attempt to get the foul was kind of funny, and kind of sad. Seemed worth a mention.

New York Knicks: They let Mike Dunleavy Jr. beat them almost single-handedly. Funleavy matched his career-high of 36 points for the fourth time this season. Two of those four scoring explosions came against the Knicks.

Isiah Thomas: He looks so sad, I almost want to give him a hug. Around the neck. With a chain.

My own stubbornness: Several of my readers have been calling me out on this, and I'm finally ready to concede to the facts: Mike Dunleavy Jr. doesn't totally suck anymore. You can read my formal concession speech in my NBA Closer column on Deadspin. But until further otice, I am going to officially retire the Basketbawful adage that "You can't trust any team that gives up a career night to Mike Dunleavy Jr." His good games just aren't a fluke anymore. I guess it's not too surprising when you think about it. I mean, he's being coached by Jim O'Brien this season, the same Jim O'Brien that made Antoine Walker an All-Star. Twice. I'm guessing he turns water into wine in his spare time.

Wally Sczcerbiak and Ben Wallace: I'm not going to bother mentioning how John Hollinger and several other NBA experts said the trade that brought these fleshbags to Cleveland was a "big-time win" for the Cavaliers. (Oops! I mentioned it!) Wally's numbers have plummeted across the board. That trend continued last night, as he barely even played (5 minutes, 46 seconds) and had the productivity to show for it (2 points, 1-for-4 from the field). As for Big Ben, well, here's how Matt from Hardwood Paroxysm put it in an email to me: "23 minutes. 2 points. 4 rebounds. 1 block. 3 Fouls. What's amazing about Ben Wallace isn't that he's terrible. It's that he's non-existent. The man is a freaking ghost. It's like he's the ghost from Super Mario Brothers. He disappears if you look at him in any way." One slight correction: The ghosts in SMB didn't disappear when you looked at them, they just froze in place. But that only makes the comparison even more appropriate.

Zydrunas Ilgauskas: I know it can't be easy to play with a bulging disc in your back, especially when you're playing against a monster like Dwight Howard. But Big Z couldn't have been eaten alive any more if a group of tribal cannibals had cooked him alive in a big copper pot. He shot 2-for-10 and almost fouled out in 29 minutes. (Okay. The cannibal joke might have been a little too much, since Superman shot only 6-for-14.)

Jameer Nelson: The Basketbawful broken record keeps skipping on this one, but the Orlando Magic's fatal flaw is their flawed backcourt. Last night, Nelson shot 2-for-12 from the field for his 6 points. And yeah, he hit a big three-pointer with two and a half minutes left to help seal the deal, but even that one rimmed out and hit the backboard before the hoop choked it back down. To be fair, though, Meer Meer did have 7 assists.

Funtastic extra: More randomness from Hardwood Paroxysm's Matt: "If you're the Charlotte Bobcats, how do you lose to Memphis by 18? How? How is that even possible? Is it like Ferris Bueller's Day Off, where Ferris says they have to drive home backwards? Is that what Charlotte did? You know what I want to do? I want to watch that game like Memento. I want to see it backwards. Have it begin with the Bobcats losing by 18, and then watch how they self-destruct a little bit at a time, until finally they're at 0-0. That will leave me much more satisfied."

Update: Basketbawful reader Kevin confirmed that the Super Mario Brothers ghosts -- which are called Boos -- do indeed turn invisible when you look at them. The Super Mario Wiki has an entry for the Boos. You can learn all sorts of interesting Boo facts, such as that they have their own system of government (a monarchy), several sub-species (which include Atomic Boos, Balloon Boos, Big Boos, Boo Buddies, Dark Boos, Fishin' Boos, and many others), and a whole list of "notable" Boos (Boolossus, Bootler, Franky, King Boo, The Creepy Steeple Boo, et al.).

Brian Cardinal: He couldn't even get on the floor in a blowout. What's one level below Human Victory Cigar? Human Paperweight? I mean, even Kwame Brown played. Kwame Brown!

Smush Parker: Welcome back, Smush! Based on your stat line -- zero points on 0-for-4 shooting in 10 minutes of lack-tion -- it's like you never left us!

Los Angeles Clippers: I just get this feeling that they've chosen to tank the rest of the season. I mean, they not only signed Smush Parker, they're playing him too. That's a wee bit suspicious, don't you think?

Chicago Bulls: So much for pulling off the upset. Man, that 33-13 fourth quarter was brutal. And so was Kirk Hinrich's cameo (zero points, 0-for-6, 5 assists).

Chris Duhon: Du-Du gets extra special mention for missing the game -- and not even travelling to New Orleans with the team -- due to the ever-popular flu-like symptoms.

Damon Stoudemire: DNP-CD, baby. If the Spurs actually do manage to defend their title this season, he's going to be playing the role of "Glenn Robinson: Championship Remora."

Robert Horry: He let a potential game-winner fly with a couple seconds left instead of calling timeout (as coach Popovich wanted) in one of those classic "He's a genius if he hits it and an idiot if he misses" situations. And I hate to ruin the ending for you, but he was an idiot.


Jason Hart: This kid really came through for me; I was afraid I was going to get through a Worst of the Night post without awarding a trillion. And Jason had a two trillion! Woo hoo!

Rafer Alston versus Sasha Vujacic: This one's a day late but worth reviewing. Near the end of the Lakers/Rockets game on Sunday, Rafer Alston went all NBA Street on Sasha Vujacic, Sasha hacked him for it, and Rafer responded by sticking a finger in Sasha's mug before getting restrained by a referee. It's kind of a shame that Alston had to transform back into Skip 2 My Lou at the tail end of his best game as a pro. It's also kind of a shame that Vujacic is such a douche. (Thanks to everybody who commented or e-mailed me about this one.)

Babyshoes said...
I would not read too much into T.J.'s outburst. That Marc Davis gave Brandon Roy a T the other day, who... lets just say he's about the opposite of Sheed.
I think Marc Davis is becoming the new Steve Javie of the NBA.

Ah, Super Mario, the most racist game on the planet. Being an Italian myself, I often ponder why a bunch of Japanese folk would make the figure head of their company an Italian? Oh, but of course, the only job we poor folk can have is snaking poop clogged drains by being a plumber. Did I mention the Italian on Italian crime in the game? In super mario 1, the first "bad guy" you come up to is called a "Goomba", which is also a derogitory term for Italian. So not only is Mario running around stomping other Italians, they had to sneak in a slur!
3/18/2008 11:04 AM

Anonymous said...
TJ Ford looks like he just wanted to leave the court because if you really want to punch someone in the face, one person keeping you back wont stop you.

LooseChange said...
this isn't basketball related, but i had to point this out:

if you look carefully in the rafer video, you can pick out rob dyrdek and big black from the show Rob and Big sitting in the front row next to the scorer's table. and they are both rockin' rockets red. awesome.

dyrdek is a skateboarding legend [bows] and Rob and Big is guaranteed to make your life at least 97% better. honestly.

Anonymous said...
The Rob & Bob show is indeed the shit! That's official son!! Basketbawful, I can't wait until your worst of the year post. The mascot for that has to be Isiah Thomas, with Greg Ostertag for honorable mention of course.
3/18/2008 4:46 PM

Anonymous said...
how does that make vujacic a douche? alston wants to showboat with the win in hand? foul him, bring him back to earth. alston is more of a douche for acting like a lil bitch when he got fouled, "you don't do that in america! foreigners are supposed to be crossed over!" what a joke, go back to the streets.
3/18/2008 4:59 PM

And as for the Wafer and Bootyclit incident, I wish Wafer would have tossed the ball off of Bootyclit's head, pulled his jersey over him, and crip-walked to the basket for a layup. That would have been great for Professional Basketball.
3/18/2008 7:37 PM

Anonymous said...
"Smush Parker: Welcome back, Smush! Based on your stat line -- zero points on 0-for-4 shooting in 10 minutes of lack-tion -- it's like you never left us!

Los Angeles Clippers: I just get this feeling that they've chosen to tank the rest of the season. I mean, they not only signed Smush Parker, they're playing him too. That's a wee bit suspicious, don't you think?"

Anonymous said...
That TJ outburst was due to weeks of frustration coming back from his injury- he's unaccustomed to where he is right now and that tantrum was just him boiling over...

after the rafer incident on sunday, that cemented the belief in my mind that the rockets are NOT a championship contender this year. similar to the magic in the shaq/penny days (the year that royal squeezed out a trip-dub in the closing seconds of play during a blowout win), the maturity doesn't appear to be there. a shame because getting rid of team cancers mike james & bonzi seemed to be just what the team needed. apparently all the trash didn't get taken out

and cassell's 'strut' moves seem to be improving although not quite as entertaining as his inflamed testicle shuffle
3/18/2008 10:48 PM

Anonymous said...
http://www.nba.com/playerfile/carlos_boozer/career_stats.html
Look at his regular season ranks. Why no one from nba.com has fixed this yet is beyond me.
3/19/2008 12:28 AM

"We knew what we needed to do defensively," Bryant said. "We got after them. We got our hands on balls. We stretched them out offensively and we attached them."
3/19/2008 4:46 AM