Well, the NBA playoffs are underway, it feels like we've managed an entire post-season full of Bawfulness in just a few days.

A lot of the recent terribleness is directly related to "predictability": as in "If I do this [mildly / somewhat / extremely] stupid thing, what is the likelihood that this [mildly / somewhat / extremely] awful thing will happen as a result?" So let's head to the Bawful-meter (1 to 10, with ten being the most Bawful) and work our way up the chain of idiocy:

A Rose with a torn ACL:


Ok, so everyone in Chicago wants to skewer Tom Thibideau's nutsack on the Willis Tower antenna for keeping oft-injured Derrick Rose in a game that was well in hand, but it's tough to put this one entirely on Thibideau. I'm thinking it's time for D-Rose to eliminate his signature "ACL-shattering-needless-jump-step" from his repertoire of moves, especially at the end of a game you're about to win. Oh and in case you're wondering, yeah, I also make a habit of blaming victims of violent crime.

But in the end, an injury like this could happen at any time, regardless of the situation, and Thibs said he was trying to get D-Rose ready for end-of-game situations. Hard to predict, so mild on the meter: 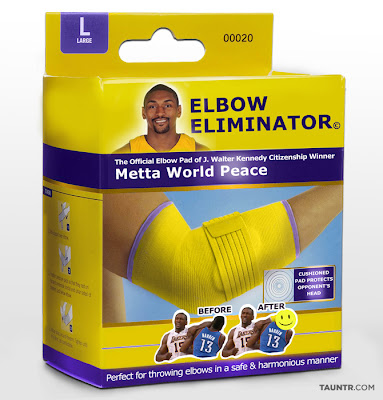 Ironic that a man who has named himself "World Peace" is trying to decapitate people, but Hannibal Lecter was a Psychiatrist who also ate faces, so there is a precedent. There is literally not scale on which to judge what Ron-Ron did...does he genuinely show joy by flinging elbows? Did he think Harden was coming at him? Or did he just want to see if a man's face would do this?

While this bizarre incident happened before the playoffs, it certainly affected them, with MWP getting a well-deserved 7 game suspension. The Lakers don't mind, given that their first round series is against the Nuggets. Maybe MWP figured the Lakers wouldn't need him, and just wanted a league-imposed break.

Side note: Should the Lakers go 7 games with the Nugs on purpose just so that MWP can be available for the entirety of the next series? Crazier things have been on a basketball court. Quite recently, in fact...


Contact with an official gets you a game, period. Your first instinct when approaching an NBA official should be "These guys are already lousy at what they do AND have short fuses AND want to make every contest about them instead of basketball, so I better be measured with my discontent." Apparently, Rajon Rondo does not possess this ability to reason. Doc Rivers once called Rondo "the smartest player I've ever coached."

At this point, one might question that statement, but read carefully - he's the "smartest player" Doc has ever coached. As soon as the whistle blows, a man in a basketball uniform turns from a player into a person. Sometimes this line is blurred, and sometimes it is clear, but nowhere is the Jeckyll and Hyde on better display these days than with Rajon Rondo. Rarely does frustration manifest itself into bad judgement more distinctly than with Rondo...

It's not like they were gonna win anyway, but...:

...but fortunately for Rajon, that very thing happened just last night, when Amare Stoudemire put his fist through the glass encasing of a fire extinguisher after a Game 2 loss to the Heat.


He had time to walk off the court, walk down the hall, decide to damage some property, and not even have the common sense to wrap a towel around his knuckles first. Now, he has managed to: 1.) Voluntarily relieve himself of the pressure of trying to beat the Heat 2.) Not be there for his teammates, and 3.) Pretend to possess such competitive desire that he felt compelled to punch an inanimate object (which punched back, quite effectively it seems).

The only reason this doesn't earn a 10 is because of the label on the fire entinguisher, which Amare may have misunderstood: 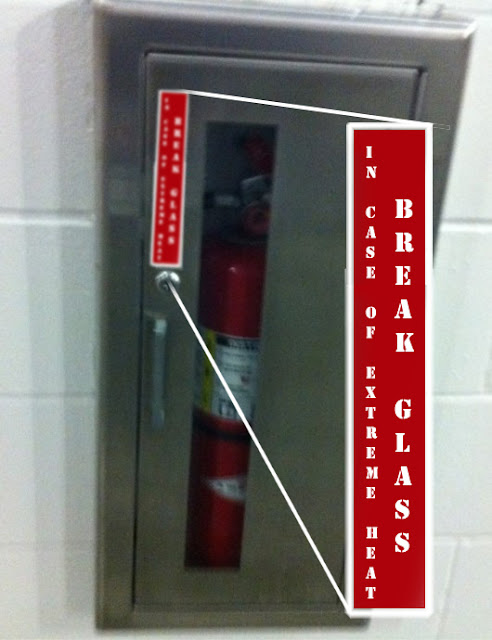 chris said...
Now if we can hand it to the Baby Cubs for their performance in Game 1, with a 24-point lead AT HOME in the 4th quarter...

AK Dave said...
In response to Wormboy/Naz's comments on the previous thread:

First of all, Mavs-OKC has been by FAR the most (and perhaps the only) interesting series thus far.

Mavericks aren't done yet. They are on life support, but going home should make the difference in games 3&4. Role players do better at home (per Kenny Smith). And Mav's role players have been pretty piss-poor. If Haywood can just box out and rebound, and somebody (anybody) can find their 3pt range, this series is going to Dallas.

Dirk is back to playing in god-mode. They just need to find this year's Stojakovic, DeShawn Stephenson, and J.J. Barea to come in and knock down some bunnies. They surely miss Chandler's rebounding. Mahinmi needs to step it up. Vag Carter just needs to play "half man"- "half amazing" isn't even really necessary.

Thanks Ted. You evoked several bona fide lulz there. Much appreciated, and your artfulness is as good as ever! (Heh heh "Extreme Heat")


@AK Dave: Dunno man. That Clips 26-3 run comeback was pretty freakin awesome! So was watching the officials take turns slurping Andrew Bynum by letting him zone out and set up a little fort in the lane (made of couch cushions and everything--just like when you were a kid!)
5/01/2012 5:13 PM

Other Bawful moments from Mem-LAC included the "Z-BO's down/ -Wait, i'm not TORN ACL yet" fast-track push-ups. Also copy a TO that came from his post-up dribbling the ball on his foot
5/01/2012 6:12 PM

Naz said...
Yay, I'm happy Pop won Coach of the Year. However, I nearly shat myself when the tally of COY votes showed me that 2 PEOPLE VOTED FOR VINNY DEL NEGRO

Anonymous said...
hahahaha, great job ET.
Memphis choke job did deserve at least one paragraph though.
Also of note, Lebron James saying that the season wont be a failure should the Heat not win the title.
5/02/2012 2:14 PM

Also, google image search for Melo Extinguisher and the first result is a classic.

JJ said...
Wave, technically, I believe this site was ALWAYS run by volunteers since I don't think anyone is getting paid. And additional volunteers such as Raja are stepping up here and tehre. That being said, I do know what you mean. I personally miss Bawful's wit and unique sense of humor. But, I guess no one can stay passionate about their hobby forever.
5/04/2012 9:43 AM