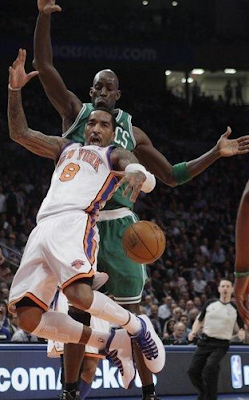 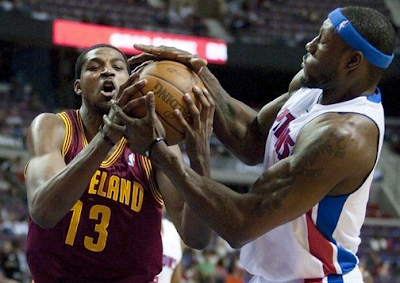 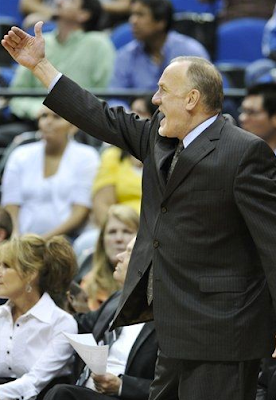 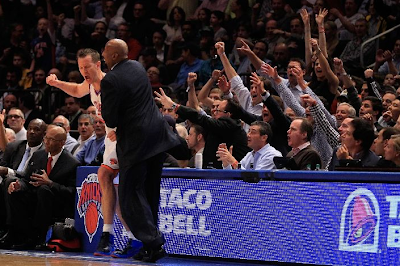 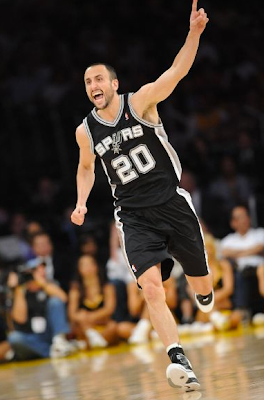 "I did it! I made it across the border!" 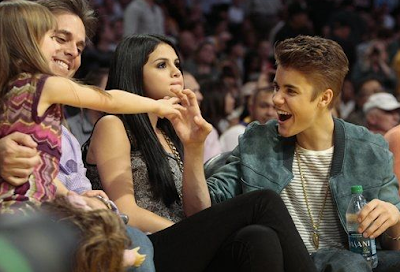 Justin Bieber (and his new lesbian haircut) are getting ready for life when he hits his late 20's. 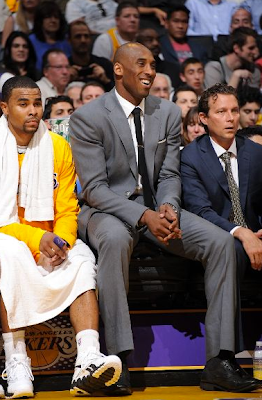 Where satisfaction at your team thinking they're better without you happens 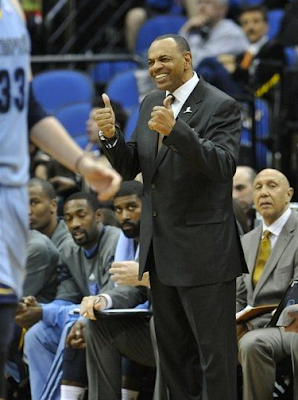 What kinda has 2 thumbs and likes to freak out his own team?
THIS GUY
Minneapolis Lakers:  Well, they say revenge is a dish best served cold.  And this one clearly never left the ice box.
After humiliating the Spurs on the road, SA turned a 2 point deficit in the 2nd quarter into an 18-0 run that brought back fond memories of the Lakers 2005 season.
Shooting a blistering 60% from the floor, the San Antonio just kept pushing the ball to get easy baskets.  So what did the Lakers do to counter with two 7 footers?
They just tried to push the pace even faster.....until they got ran out of their own building.
"The tempo was in their favor," Lakers coach Mike Brown said. "They sped us up, and we did not look like we had -- nor did we try -- to get control of the game. We got out of character a bit of the way we've been playing lately. You have to give the Spurs credit. I envy teams that have a coach who knows what he's doing.  Still can't believe I left my notebook back in SA"
As for the player of the game, all I can say is hide your wives, hide your children, and make sure you've really hidden your wives again because Tony Parker was a one man wrecking ball.
Going off for 29 points (14-20 shooting, same number as his attempts for snagging his teammates girlfriends)  and 13 assists put the Lakers on their heels....until they just toppled backwards.
Kobe should return for the next meeting between the two teams this Friday.
Don't be surprised if  he takes away shots from Bynum/Gasol and goes 7/30.
Boston Celtics:  I know Bill Russell isn't dead yet, but when he saw this statistic, he found the nearest open grave and began rolling:
Knicks Bench: 55 points (sans Lin and Amare)
Celtics Bench:  2 points
The Knicks were down 17-24 in the first, when JR Smith walked up the court and hit a 3.
And that's okay, because teams are going to hit a 3 now and again.
Just when you let them do that, oh I don't know, 18 more times you know you're just begging for a loss.
"We didn't defend the 3 at all tonight," Pierce said. "We dug ourselves a huge hole that we couldn't climb out of."
Didn't defend the 3 at all?  The Celtics were playing defense as though the key was an island and everything else was water.
They let Steve Novak shoot 80% from 3 point range (8-10) alone.
Can't wait for him to star in the Revenge of the Nerds reboot, with Matt Bonner as his sidekick and Brian Scalabrine as the main villain.
Cleveland Cadavers:  First off, I want to give the Cavs some credit.  Anytime you can play for pride and trim a 50 point deficit to 39, you know you're fighting hard to land Anthony Davis.
This has to be the most 'Bawful game of the year.  The Cavs though it'd be cool to play basketball like something out of a game from 1947.
They were down 50-100 and the fourth quarter hadn't even started.
The Pistons were stunned that they got out tanked so quickly, and effortlessly.
Hell, even the Bobcats were jealous.
The Cavs "trimmed" the deficit to make the final score a "respectable" 77-116.
"Trust me, I'm trying to figure out what happened myself," Jamison said. "I just know that I'm not going to be watching SportsCenter or reading any newspapers for the next couple days."
I'm pretty sure with the season his team is having, Jamison (-47 for the game) has probably stayed away from SportsCenter and any newspapers all season.
Who knows, maybe the Cavs are suffering from a lottery hangover.
Scary thing is, the Cavs got off more shots than the Pistons did, and had more free throw attempts.
After doing some research, I knew this had to be one of the biggest blowouts in NBA history.
This wasn't the worst of all time, because that honor went to....
*drum roll*
Your 1991 Cleveland Cadavers, who got blown out the Heat 148-80.
Here's to consistency folks.
Chris's Lactose Intolerant Report:
Pacers-Sixers: Nikola Vucevic vanquished 2 boards and a field goal in 11:29 with a 5:4 Voskuhl via near-foulout.
Sad Cavs-Pistons: Ben Wallace botched a board in 14:34 with a brick, foul, and turnover for a 2:1 Voskuhl.

Celtics-Knicks: Greg Stiemsma went +3 in 9:46 via fouls, also earning a 3:0 Voskuhl.  Ryan Hollins had himself a pot of gold worth 1.15 trillion (70 seconds), and JaJuan Johnson went Goomba hunting for a mere 44 seconds to garner himself a Mario.

New York's Jared Jeffries was perfect on one attempt from the field in 5:39, but fouled twice and lost the rock once for a 3:2 Voskuhl.

Grizzlies-Wolves: Gilbert Arenas bricked once from the Mary Tyler Moore statue for a +1 in 309 seconds, while Quincy Pondexter also tossed a brick from the Foshay Tower and fouled thricely for a +4 in 366 seconds.

Spurs-Lakers: Patrick Mills earned a +2 for San Antonio in 220 seconds via foul and turnover.

Meanwhile, Darius Morris also earned the same suck differential in the same timespan for the Lakeshow, but via brick and turnover.

AK Dave said...
Way to get in a Nazi reference and a Mexican border-crossing joke in the same post. It's like Fox News decided to take over Basketbawful for a day. Brace yourself for the inevitable reader outrage/backlash, Raza.
4/18/2012 4:08 PM

Anonymous said...
I'd like to point out, because it is not clear , and because I attended the game, the worst blowout in history was a Cavs victory over the Heat.
4/18/2012 4:14 PM

AK Dave said...
(Let me clarify that comment as it doesn't read the way it sounded in my head when I wrote it:

The post was funny, as always. But Nazi jokes are polarizing and so are Border-Crossing jokes aimed at latino players. Some people might get pissy as a result. )
4/18/2012 4:17 PM

Raza, there are certain areas that are avoided like the plague by anybody looking for a public audience. Well, unless you are Ann Coulter and searching for a very select audience. Old Matt "Bawful" McHale would skirt close to the edge with his "man love" stuff, but I don't think anybody really minded that. Implied without actually saying. You know what I'm saying? Not that I'm saying, I'm just saying.

Raza said...
To those who thought some of the jokes were offensive, I truly apologize.

LotharBot said...
> "there are certain areas that are avoided like the plague by anybody looking for a public audience"

Let's see what Weird Al has to say about that:

Adrià said...
That was great Raza :D Oh wait I'm Spanish! And I lived in Germany for 6 months and I liked it! And I'm also a lesbian in a man's body!

Anonymous said...
For what it's worth, I don't see anything wrong with the jokes. Certainly not offensive, though the Ginobili one was meh. Adelman and Mein Kampf was money though. Of course there is a line but I don't think it got crossed here.
4/19/2012 10:36 AM

Lucas said...
Looks like you upset the powerful Illegal Immigrant Nazis with Lesbian Haircuts lobby. I wouldn't want to be in your shoes.
4/19/2012 11:32 AM

Wormboy said...
I don't have a thin skin, so I don't care unless it gets really ugly. I'm also a straight white man, so it's easy for me to not care.

I'm just saying that race and gay jokes have to be handled very, very carefully. We just got a Latino just crossing the border joke. What's next, watermelon? Fried chicken? You think that won't piss some people off? Aren't those just stereotypes about a different ethnic group? What makes those potential jokes offensive while the border crossing joke isn't?

So when I see somebody heading further down a slippery slope, I give them a friendly heads up so they can think about the point on the slope they want to stake out as "no further." Doing so was meant as a friendly gesture. No need for anybody to get defensive about it.

For what it's worth, the founder of this site clearly thought about it, and carefully stayed on one side of a line he had settled on. McHale's a smart dude, and he won't wreck a potential commentariat career by such stuff. Since you're temporarily borrowing his blog, you might want to think about it, too.

Another point: you've set up a Facebook page, and I promptly joined it. Then you made a latino and gay joke in the same post, and I promptly unjoined it. In the digital age where one's activities are public, a professional can't afford stupid associations. I'm sure the comments were just meant in fun, but who of us with real careers can afford the wrong person to look in at the wrong time? And so it goes. Think it through. It's not howI or you or a fanboy thinks about the joke, it is how it will be perceived by others. You thereby choose the breadth of your audience.
4/21/2012 12:29 PM
Post a Comment
<< Home
Subscribe
RSS Feed
Mailing List