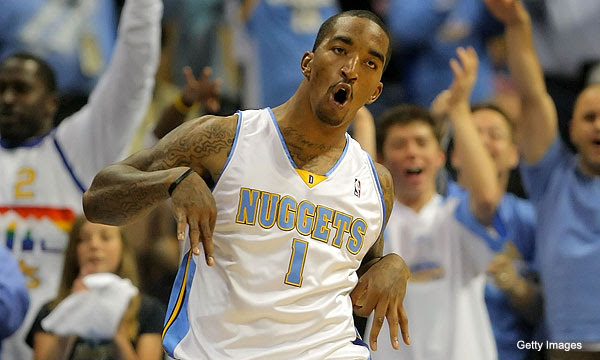 We can't give you a turkey. But we can give you an impersonation of a turkey!
Happy Thanksgiving, everyone! As I continue to digest my ridiculously huge dinner, I would like to remind you we're mere days away from the greatest of all holidays. It's the most wonderful time of the year...
I know there's plenty of family stuff to do today, but I didn't want to leave bad basketball completely undocumented. And I'm sure some of us will be watching the TNT games tonight, so feel free to drop by and post your thoughts in the comments. I might even share my legendary sweet tea recipe if you're lucky.
Update! Ron Artest, Welfare Defrauding Machine: Crazy Pills and his sister are the focus of a welfare fraud investigation. Is it possible to be surprised and completely unsurprised at the same exact time? It's an oxymoron, but it's how I feel right now. Sorry for burying this phenomenal news in another post, but I don't really have anything else to add at the moment.
Worst of the Night Season So Far:
The LA Clippers at the Indiana Pacers: You know what I'm thankful for this Thanksgiving? I'm thankful that because it's a holiday and I have holiday crap to attend to, I have an excuse for not having to write much about this horrible, horrible, horrible game. Just look at the box score. Sonofabitch. Also, consider this quote from Bawful last night: "Clippers-Pacers makes me want to never stop punching myself in the groin ever again."
Lacktion Report: Since we're not doing a full Worst of the Night post thanks to the holiday, I'm passing along Chris's lacktion report here. Neither Thanksgiving nor a vacation cruise can stop lacktion, and Chris was well aware of this when he wrote it late last night: "One more day before Thanksgiving...and we have plenty of lack to be thankful for!"

Clippers-Pacers: Steve Novak continues to prove himself a challenger to Dominic McGuire as least productive player of the year, with a 5 trillion (5:01) that no doubt has Donald Sterling thinking of charging him for the team bus's electricity some time soon.
Sixers-Celtics: Lester Hudson seems to come from the same family that brought us "Jackie Chan's Action Kung Fu" in cartridge form, as evidenced by tonight's celebratory 21 second Mario!
Crabs-Pistons: Chris Wilcox became the latest to don a Tanooki Suit, with a 4 second Super Mario for Detroit!
Bucks-Hornets: Milwaukee's Jodie Meeks spent a mere 7 seconds with the power-up mushroom for a Super Mario. (EDIT, 11/30/09 - apparently Meeks's night-before-Thanksgiving performance made him the 100TH LACKTATOR OF THE 2008-09 SEASON! Congratulations!) Morris Peterson spent three of his nine lives on bricks (twice from the French Quarter) in 4:17 for a +3 suck differential.
Nuggets-Wolves: Wayne Ellington was in a sentimental mood for some lacktion as he bricked once from Hennepin Avenue and lost the rock twice in 2:58 for a +3.
Warriors-Spurs: Malik Hairston missed a field goal for a +1 in 3:41 for San Antonio.
Grizzlies-Suns: Alando Tucker dug out some desert diamonds with a 2.6 trillion (2:35) mountain of moolah for Phoenix.
Nyets-Blazers: As the team from Jimmy Hoffa's final underground swimming hole continues to experience its struggles, Sean Williams tried to stem the tide with one board, steal, and block in 14:40 - but four fouls have kept him longing for rubles in a potential Long Island future.

Nationally Televised Games:
Magic at Hawks: Mike Bibby is a game-time decision. His sprained ankle led to this fantastic quote from Marvin Williams: "Bibby's our quarterback. It's tough when your general goes down like that." So we have a football reference and an army reference. I thought Bibby played basketball?
Bulls at Jazz: The Utah fans violently booed their own team during the third quarter of their home loss to the Thunder on Tuesday night. What's the latest on that Greg Ostertag comeback idea? That'd help the fans get back into the game, right?

BJ said...
It's like watching a group of drunks playing in the garage -- you know you're going to have to call 911 sooner or later, but you don't know how bad it's gonna be (dismemberment with chainsaw, crushed under car, accidental firearm discharge, welding rig explosions . . .)
-BJ
11/27/2009 1:45 PM
Post a Comment
<< Home
Subscribe
RSS Feed
Mailing List