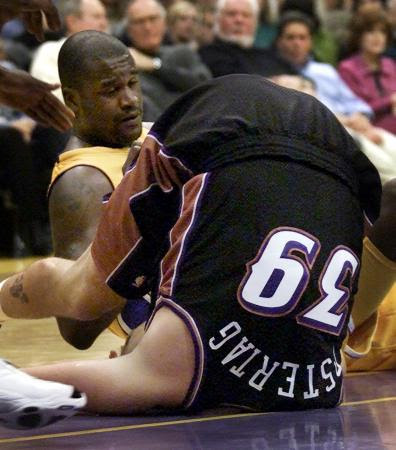 Falling on your damn head doesn't count
toward suck differential. But it should.
suck differential (suhk dif'-uh-rehn-shul) noun. A descriptor similar to the trillion that not only describes a player's statistical insignificance, but also quantifies the player's net negative effect for their team. Can be abbreviated as "suck."

Usage example: In Wednesday's Bobcats-Knicks game, Nazr Mohammed's +1 suck differential was upstaged by Malik Rose's +2 suck. How much money do they make again?

Word history: The term was coined and defined by basketbawful reader AnacondaHL in the comments section of a recent Worst of the Night post. AnacondaHL wrote most of this post. However, I did make the following change: A one trillion is still awarded only if a player has zeroes in all categories. Thus a suck differential score has some attributes that are similar to the trillion, only they have racked up some stats...all of which are negative.

Note that +/- points differential is distinctly NOT used in the suck differential. We can't have better teammates covering for sucky teammates now, can we?

One problem with suck differential is that each suck category is given equal weight. Does 2 missed free throws equal 2 turnovers on the suck scale? What if one personal foul was intentional for clock management? A more complex formula could attempt to describe "team points/possessions lost because of what you did", and could adjust FGA by +2 (+3 for missed 3PTA), TOV's by +1.1, etc.

But quite frankly, if your only opportunity to make a game and statistical impact was two free throws and you miss both, you deserve the +2 to your suck differential. And if your only job in the game was to be used for your personal fouls, that's a pretty solid +1 earned.

Making this post created even more questions in my head. What was the largest single game suck differential last year? Who leads the league with the highest suck-to--minutes played ratio? Could suck differential, applied properly to +/-, actually make a meaningful stat independent of teammate performance? Let's get 82games.com on this pronto.

Matt Grady said...
Dominic McGuire against the Magic last night: thirteen trillion with a +2 suck differential. And that's assuming we use a standard formula where turnovers don't count for more than the other suck stats. Beat THAT.
11/09/2008 11:22 AM

On the other side things of Alexis Ajinca finished with a suck differential of 2 in 5 minutes for Charlotte. Also, I nominate the Bobcats for worst of the weekend as they managed to lose by 10 despite the fact that 1/3 of Toronto's roster made a negative contribution. They also only managed 12 points in the 4th while playing at home!
11/09/2008 4:27 PM

m. Alana said...
A worthy addition to the list. And very appropriate for basketbawful, since it's sort of the PER of players too terrible to have anyone paying attention to their PER.

Anonymous said...
no post about this graham dude from the raptors, who got absolutely destroyed volleyball-style by our hero, super mario west?
11/09/2008 5:02 PM

lordhenry said...
Now that the Sith Lord Darth Mamba has succeeded in his first mission of earning the confidence of the jedi knights, Emperor P.J. has decreed that now is the time to strike down the other jedi before they are ready. Lord Mamba has learned all of their weaknesses during the "olympic mission" and now is using them to strike the jedi down one by one. First, jedi master Manu was defeated, and then his padawan, Tony Parker, went down as well. Darth Mamba also instructed his evil apprentice Andrew, to strike down the chosen one, Greg, before he became too powerful and could threaten their plans. It may only be a matter of time before the jedi are all extinct.....
11/09/2008 6:32 PM

Unknown said...
hollinger should add this to his collection basketball formulas.. And this will top to be the most accurate
11/09/2008 8:12 PM

Anonymous said...
The rim must have really worked on its defensive ability in the off season.

I saw Carmelo blow an open dunk against the Grizzlies early on, just a couple of possessions after someone else on the Nuggets (can't recall who) was also denied by the rim. And this Houston game is just starting, so who knows what Yao's gonna do.

Drake said...
I'm not feeling 'suck differential', at least in relation to 'trillion'.

It's not a bad way to show how much a player did suck in his few minutes of lacktion. But you can't call the player's line a trillion anymore, because there are no longer zeroes-only after the guy's minutes-played.
11/09/2008 9:53 PM

Dominic McGuire against the Magic last night: thirteen trillion with a +2 suck differential. And that's assuming we use a standard formula where turnovers don't count for more than the other suck stats. Beat THAT.

Anonymous said...
I was watching the Mavs lose to the Clippers (can I get a "huh? the Clippers?")and I was amazed by the ease the Clippers turn over the ball. 18 may not sound that high (I haven't followed the NBA for an awful long time to have any reference point) but it was just plain awful - it's a miracle that the Mavs didn't capitalize most of the time.

Anonymous said...
jj: was this it? freaking awesome block! what an epic ego-ectomy!

Anonymous said...
One particular horrible game came to my mind (I was looking for terrible games a while ago and found this one):