(and remember to check out the Basketbawful Facebook page!)

Mellon Collie and the infinite sadness.


So, guys, if you had predicted that South Beach would've held the aging, fragile C's to only 32 points after halftime...and that Game 4 would come down to a final shot in which Dwyane Wade was covered by Marquis Daniels...and got an open look at the arc...


You wouldn't have expected this outcome, would you? 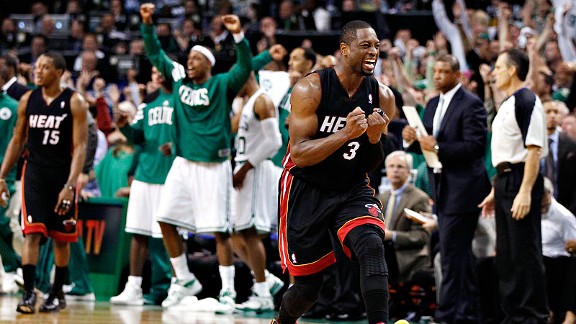 Coming off the heels of Rondo missing one of two free throws (and notice how he never runs across to help Marquis Daniels out!), not long after a Mickael Pietrus rebound sequence which burned about 50 seconds off the clock...against all odds, we have ourselves a new series!


(And an update: from Grantland, GREAT frame-by-frame analysis of the final possession of fail!)

We also have, for the first time, King Crab fouling out in a Miami uniform:


To think, just minutes before, LeBron actually was the reason this game even went to OT.

Hey, look who made not one, not two, not three, but zero attempts to shoot in that sequence!!!

Here we are.  Conference Finals tied on both halves of the bracket.  Tired narratives just waiting to be resurrected pending whoever makes it to the Finals.


THE ASSOCIATION: Where providing bulletin board material to your opponents HAPPENS!!!!

Heat-Celtics: Greg Stiemsma made a cameo appearance in the ocarina of 32 seconds of time for a Mario.

don't follow the footsteps of the dumb-ass commentators -- Battier kicked Rondo first. Battier is the classless one here and I don't see how Rondo provided "bulletin material" by responding in kind.

Barry said...
Cue everyone blaming LeBron James for all the Heat's failings in 3,2,1....