Thursday, May 26, 2011
Worst of the Playoff Night: Obvious Result Edition
By AnacondaHL at 8:00 AM
28 comments 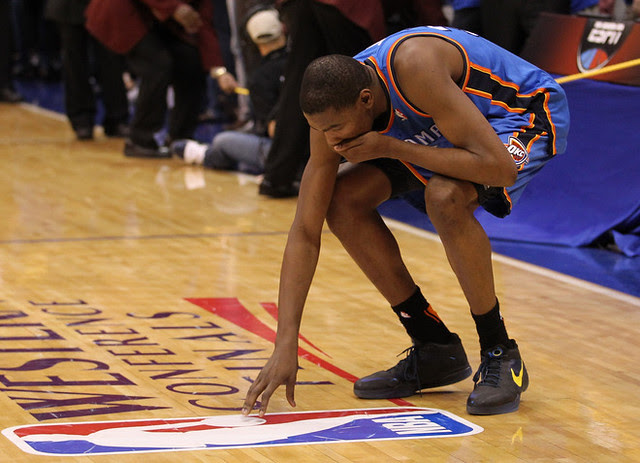 Kevin Durant's acne: Good morning readers of Basketbawful! We started off the night with some excellent close-up KD interview acne....bleegh. Eh, the ESPN pre-game is crap anyways, I'm turning it off until 9.

But I couldn't resist hearing what "bold predictions" would be made tonight:

Sadly, it was obvious that JB made the most reasonable guess. And so it was.


The Chokelehoma City Blunder: Here we go again. Up by 7, 5 minutes to go, close out by getting out-scored by 17-6. How did this happen? Again?

The game started ugly, with Dirk's failed attempt at Kevin Love Outlet, and for the whole game Dallas was TERRIBLE at recognizing Nick Collison on the baseline just outside the paint. But the tide first changed with yet another Harden flop attempt. Only this time, the home crowd did not buy it at all, and neither did the refs.

But that didn't stop the refs from sucking in general. Poor Dirk, up until the first minutes of the 4th, was getting hammered harder inside than Tori Black. Didn't the refs get the memo that the 2006 rematch hasn't officially started yet? In related news, Nick Collison set an NBA single game record with 9 personal fouls.

Yet thus is the value of experience, and Dirk yet again did his thing. More on this later. Marion put on a throwback defensive performance, and hell even his floater makes and 4 ft misses brought me some nostalgia of his Suns days. Okay back to Dirk. Check out how he ended the 3rd:

Really though, would you even believe me if I told you that Brendan Haywood sinking free throws helped keep the Mavs afloat?


Russell "please don't start calling him by the nickname Mark Jackson made up 'Wild Thing'" Westbrook: Granted, the OKC choke was more evenly distributed tonight, but it seems only fair to start with Westbrook. Starting with that terrible play in the third, when dribbling it up the court on the sideline with Jason Terry defending. I think a whistle was blown almost simultaneously as Terry tried to reach in for the steal, but Westbrook just lost it and elbowed Terry directly into referee Monty McCutchen. You could see him visibly stunned and pausing for a second, like "wait, aren't I supposed to be giving you the benefit of the doubt on these whistles? Sorry bro, I gotta T that, because that was completely dumb". Westbrook finished with a Heroic Kobeian 31 points on 11-28 shooting.


Oklahoma in the last 5 minutes: Let's look at the numbers: 6 PTS, 2-10 FG, 2-2 FT, 9 REB, 7 TO (including a double dribble!), 6 PF (only 1 intentional). And although they got some good rebounds, they also gave up some terrible ones, including giving Dirk a second chance to try another wide open 3, which had a 107.12% chance of going in based on my calculations. And the terrible rebound that led to a Marion essentially-go-ahead fast break dunk, only Marion is Marion and kinda awkwardly bumbled and decelerated, allowing Durant to catch up and foul him while having no chance at preventing the score. Just wow.


Oh and Westbrook left the court early, which is kinda becoming no longer faux pas to do. Or the media will bring it up and compare it to the Pistons or LeBron or whoever doing it, which is giving him way too much credit. Or some other shit I don't really care.


Doris Burke, quote machine: "Mark [Cuban], if it's possible to be conspicuously inconspicuous, while there are no complaints out of New York, you have been remarkably quiet. Why?"


The Dallas Mavericks: For leaving behind the trophy, leading to Jason Terry awkwardly walking back out to the court to pick it up. But props on everyone walking away from Doris Burke at the end, prompting her to display the most emotion she's ever expressed, wondering why everyone was abandoning her.


Scott Brooks post-game press conference: Wanted to get the fuck out of there (and did so)

And did someone actually ask him how he felt about Dirk getting back to the Finals? I can't even joke about this ironically, because I know someone will twist this sound clip negatively against KD.

Harden was there sporting a backpack too, (DOUBLE BACKPACK, WHAT DOES IT MEAN?!?!), and was probably only there in the first place because Westbrook was being "u mad" on the team bus. But more on the backpack. What a terrible collage of colors. The Durant bag is simple and conveniently functional, the Harden bag was just trying too hard. May this press conference be the harbinger (including the reason for Westbrook's absence) for OKC's over-hyped future.

Oh who am I kidding, I'm gonna miss the backpacks. Please don't use HGH in the offseason, Durant.


The Los Angeles Lakers: LOS ANGELES (AP) --In the boldest move big business has seen since Domino's adopted their Maoist self-criticism marketing strategy, the Los Angeles Lakers have signed Mike Brown as their head coach in a 4 year $18 million deal. Sadly, there's no improved spices on the crust of this deal, however legions of Celtics, Spurs, Jazz and Pacific Division fans have taken to the streets in jubilation upon hearing this news, some crying with palms upwards towards the sky.

"It's a miracle," proclaims one Phoenix resident. "The second coming; it's glorious. We're all saved."

Ticket sales for Lakers away games have skyrocketted across the nation (and Toronto I guess), as people want to get a first glimpse of this historic moment. Meanwhile, discussions and general anxiety have rapidly spread, as the rate of Twitter tweets and blog posts from greater Los Angeles area IP addresses has increased tenfold over the past 24 hours.

"Yea, that Campang guy was right, this is pretty much the rapture," one fan bemoans outside of Staples Center, his Kobe 8 home jersey swaying listfully in the smog as he uses his smartphone to update his Facebook status on a network he thinks is 4G because 4G is in the name but is actually far slower than the real 4G standard specifies. A small group of self-proclaimed "real Lakers faithful" have gathered in front of the stadium with signs of protest against the decision. Other vocal fans seem to have quickly moved into their acceptance stage of grief.

"Well I mean, his record isn't THAT bad, and he led LeBron and the crappy crap Cavs to like, 69 wins and a bunch of Finals and stuff, and he can fix the Lakers's defensive problems!" posts an anonymous fan on some forum. Sources say a few tried to "white knight" for the relatively reasonable poster before being overwhelmed by requests to STFU.

Mike Brown could not be reached for comment, as he was too busy spouting metaphors on ESPN's half-time show, and developing a game plan to not have Kobe hate him within 24 hours.

Former Lakers head coach Phil Jackson could not be reached for comment, although we think we heard him snickering and choking on his own spittle before hanging up his cell.


Novak Djokovic's opponents: Play the entire game assholes, there's already enough accusations of throwing matches in tennis as it is.


Lay's Lightly Salted Chips: Curse your magic, making me type with one hand until I finished consuming you! You're not even that delicious, why can't I stop...

kenny said...
I had a stream that didn't cut away to commercial right away, so I got 10-45 seconds more of announcer banter. If I recall correctly Van Gundy started singing Wild Thing along with the PA during a commercial break, much to the dismay of the other two, and I think he called James Harden that name first or it at least sparked the idea for Jackson.

Most of the other banter was disagreeing with fouls that were called, but they do this on air anyway if they have time.

Drew said...
Kris Humphries made $3.2M this season. He's out of contract next season and his career 5.6ppg, 4.7rpg and 62.4% free throw shooting is hardly likely to persuade any sane NBA GM to part with big bucks. Why, oh why didn't someone tell him that spending $2-fricking-million on an engagement ring for a Khardashian, hardly a breed renowned the world over for their dependability, was not a fantastic idea?

Clearly the guy is batting way above his average with that particular Khardashian, but still, dude, be smarter than that!!!
5/26/2011 9:44 AM

Anonymous said...
Did anyone notice that in the last five minutes westbrook and durant completely ignored harden on offense? He might have touched the ball once during that sequence - which makes sense as just before he was driving the hell out of the Dallas defense [looking confused] setting up himself or his teammates.
I think Scott Brooks peed himself at the thought of taking the basketball out of the hands of his two so-called best players. (Which they were not, in this series, at least.) The Thunder coach only had guts for one match, sadly
5/26/2011 9:45 AM

Anonymous said...
Looks like KD is about to throw up. Maybe Nike called and reminded him he had to wear his backpack to the press conference?

chris said...
I think May 23 and 25 will go down in history as two days of festive celebration and joyful schadenfreude in King County, Washington.

AnacondaHL said...
Anon - I think you missed the point of my satire, which was the usage of these terrible terms in grammatically incorrect ways (based on Internet standards) as metaphors for the terribleness described. Sorry if it wasn't the best, but I try hard to keep satire afloat in this Internet age.

LotharBot said...
I found it satisfying to see Thunder fans on realgm and other forums complaining about Dirk getting superstar calls.
5/26/2011 12:15 PM

lechuckie said...
westbrook's apologists will say that he's only 22 and he'll learn from this. but i have a feeling that he's just not the type who likes to create for his teammates. players can learn how to shoot better, defend better, move better without the ball, etc. throughout their careers, but when it comes to attitude, it's very hard to change that mindset. just look at marbury and iverson.
5/26/2011 1:19 PM

Wouter said...
Anyone else find it completely and utterly bawful that Eugene Terry had the Larry O'Brien trophy tattoo'd on his bicep? I mean, don't you just want to start cheering for the Heat to win it all just for the sheer brilliance of him beging stuck with a tattoo of something he had two shots at wilst failing miserably each time? It's like those geeks who dress up as soldiers and then wear medals of honor they bought on eBay. I can't believe this hasn't been mentioned before!
5/26/2011 1:27 PM

Rick said...
Awesome post, Anaconda. Next to Bawful himself I think your contributions are consistently the funniest.

JoeH said...
I completely agree with Anonymous at 4:37 pm. I thought Maynor was Westbrook at first when he waved everyone else off to take Dirk on. When I realized it was Maynor, I thought his coach and teammates are going to be pissed if he misses.

Also, can anyone explain why JET's dunk at the end didn't count? I replayed it a couple times (although not in slo-mo) and it seemed he got it off in time.

Wormboy said...
"I think May 23 and 25 will go down in history as two days of festive celebration and joyful schadenfreude in King County, Washington."

Preveen said...
+1 on the Tori Black ref. Thought the post was by baweful initially, but noted the Anaconda contribution before the comments went up :)
5/26/2011 11:55 PM