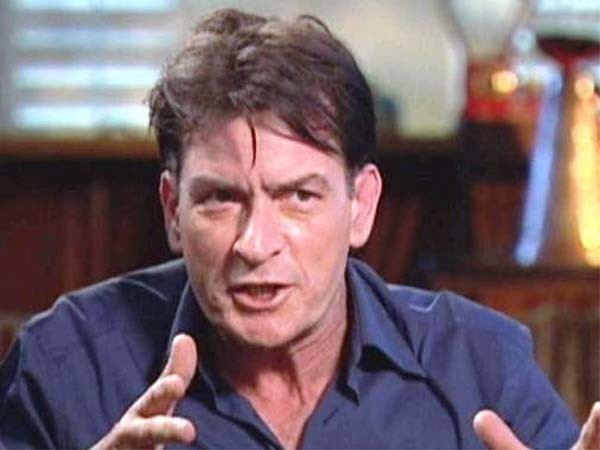 "I have a disease? Bullshit. I cured it with my brain."
Hi there. I'm Charlie Sheen and I am on a drug. Its called Basketbawful. It's not available. If you try it once, you will die. Your face will melt off and your children will weep over your exploded body.

In case you hadn't heard, I don't have a job. I've got a whole family to support and love. People a lot more important than me are relying on that money to fuel the magic. So I figured doing a guest post here would show the TV people what a major mistake they made. Come this afternoon, they're gonna rename it Charlie Bros. and not Warner Bros.

Can I write basketball: I've got a one-word answer for you: Duh, winning! It's, like, guys, IMDB right there, 62 movies and a ton of success. I mean, c'mon bro, I won best picture at 20. I wasn't even trying. I wasn't even warm.

So here you go. But be warned: You'll be scooping your brain up into a bucket when you're done reading this.

The Chicago Bulls: The Bulls started the game on a 14-0 run and went up by as many as 19 points in the second quarter before heading into halftime with a 50-33 lead. Then the shit went south: They gave up 18 points off 17 turnovers and got outscored 50-30 in the second half. Ended up losing by three points. Their offense died. Literally died. I've got a message for you, Bullies, and it's this: Dying's for fools, dying's for amateurs. Write that down. Live it. Boom!

Charlie Sheen, quote machine: "I live inside the truth, and you cannot debate me."

The Cleveland Cavaliers: The Celtics. The Heat. The Lakers. The Bulls. The Magic. What about the Spurs? I'm tired of pretending like the Spurs aren't special. I'm tired of pretending like Tim Duncan's not bitching, a total frickin' rock star from Mars. People can't figure Timmy out, they can't process him. I don't expect them to. You can't process Tim Dunan with a normal brain.

As for the Cavs? They suck: 39 percent shooting, no defense (San Antonio had an Offensive Rating of 116.9), and another loss. And don't blame LeBron James, okay? Their failures are on them. Hey, I used to be addicted to drugs. Know how I got clean? I closed my eyes and made it so with the power of my mind. The only thing standing between Cleveland and a championship is their toxic attitudes, bro.

Charlie Sheen, quote machine: "I think I'm worth over 100 billion dollars, but that's just on a cellular level."

The Washington Wizards: People wonder where the stuff I say comes from? This answer will probably blow you human mind: It comes from my grand wizard master. I don't know. Stuff just comes out and it's entertaining and it's fun. But not everything from wizard's is entertaining and fun. Take the Washington Wizards. Those sad bastards got outrebounded 54-40 and lost at home to the Golden State Warriors. Make it 15-45 on the year. Those guys, it's pretty obvious, they're addicted to losing.

Know how I avoid losing? I just don't do it. I will not believe that if I do something then I have to follow a certain path because it was written for normal people. People who aren't special. People who don't have tiger blood and Adonis DNA.

Charlie Sheen, quote machine: People keep getting confused about my "tiger blood" comments. It's a metaphor for having absolute rocket fuel in my veins. That's why people cannot process me."

The Phoenix Suns: The Suns were supposed to be surging or something. Then they play a good team for a change and find themselves down by 29 points before the Celtics took a second half siesta. Which I totally get. I got magic and I've got poetry in my fingertips, you know, most of the time, and this includes naps.

On the bright side, Phoenix got 63 points out of its bench. And watching Channing Frye and Vince Carter knock heads was pretty funny.

And you know what else? There's been a tsunami of media about the Kendrick Perkins trade and the Celtics have been riding it on a mercury surfboard. If people think Danny Ainge is insane or they don't think that what he's saying is true, I have no interest in their retarded opinions. The Celtics are gonna win inside every moment, and the haters can just find the most comfortable chair in their small house and sit back and enjoy the show.

Charlie Sheen, quote machine: "I have a 10,000-year-old brain and the boogers of a 7-year-old. That's how I describe myself."

The Detroit Pistons: Some people say I'm bi-polar. Wow. What does that mean? I'm bi-winning. I win here, I win there. My life is perfect. It's awesome. Every day is just filled with just wins. Me and my goddesses, all we do is put wins in the record books. We win so radically in our underwear before our first cup of coffee, it's scary. People say it's lonely at the top, but I sure like the view.

As for the Pistons, I'm betting they don't like their view, which is from under the feet of whoever they're playing on a given night. Last night, Kevin Love was the guy walking all over them. He had a double-double of 20 points and 20 rebounds, which was his 48th double-double in a row. Now that guy has tiger blood. Adonis DNA? Eh, not so much. Anyway, the Pistons let Minnesota shoot 53 percent, and the Timberwolves did it in Detroit.

The Charlotte Bobcats: So let me get this straight. Michael Jordan's team got beat by 40 points by the Carmelo Anthony-less Nuggets? Hey, MJ, I think we need to reshoot that Hanes commercial. This time, I'll drive away in the car, okay? I'm an F-18, bro.

Charlie Sheen, quote machine: "Winning, anyone? Rhymes with winning. Anyone? Yeah, that would be us. Sorry, man, didn't make the rules. Oops!"

The Sacramento Kings: Not often you see a team shot 53 percent and score 52 points in the paint but lose at home. Must've been the 25 points they gave up off 16 turnovers. Man, poor Sacramento fans, huh? Their team sucks and the owners are trying to move the franchise to Anaheim. Anaheim?! Look what Kings fans are dealing with, man. They're dealing with fools and trolls.

Charlie Sheen, quote machine: "If you're a part of my family, I will love you violently."

The New Orleans Hornets: Let me get this straight: Chris Paul (4 points on 2-for-7 shooting) was outplayed, no, wait, make that totally owned by Toney Douglas (24 points on 10-for-13 shooting). That blows my mind. Boom! And my mind...you borrow my brain for five seconds and just be like dude, can't handle it, unplug this bastard. It fires in a way that is, I don't know, maybe not from this terrestrial realm. So blowing my mind, it means something, bro.

Anyway, quite a fall for the Hornets. They're 4-12 since their 10-game winning streak, and three of those wins came against the Wizards, Timberwolves and Clippers. I keep hearing all this loser talk. Chris Paul has a leg injury and can't do what he used to. The team can't perform at its peak without a healthy Paul. Etc. Well, "can't" is the cancer of happening. Think about that: "can't" is the cancer of happening. Period. End of story.

The Indiana Pacers: "The rest of the season, we're coming. We're not backing down. We're not having any lackadaisical games. We're on the prowl. We're hungry."

Sounds like something I would've said, right? Well, Indiana's Roy Hibbert said it after the Pacers lost to the Heat. And the Pacers have gone 3-4 since then, including last night's 113-89 loss to the Thunder. Indiana trailed by as many as 35 in this one. So much for not backing down.

But, hey, there's no shame in Hibbert's not being able to roll like me. Bro, I probably took more drugs than anybody could survive. I was bangin' seven-gram rocks and finishing them because that's how I roll, because I have one speed, one gear. Go! The run I was on made Sinatra, Flynn, Jagger, Richards, all of them look like droopy-eyed armless children. But I'm different. I have a different constitution, I have a different brain, I have a different heart. So, you know, Roy, no shame in not being like me. Nobody is. Nobody.

Charlie Sheen, quote machine: "I wish him nothing but pain in his silly travels especially if they wind up in my octagon. Clearly I have defeated this earthworm with my words -- imagine what I would have done with my fire breathing fists."

Charlie Sheen, quote machine: "Can't you spin on a pink cloud your whole life, and just be super bitching and focused?"

Bulls-Hawks: Atlanta's starting big man Jason Collins sauntered into the report tonight by negating a board and free throw in 16:56 with three fouls for a 3:2 Voskuhl. Meanwhile, Hilton Armstrong checked in with a brick and rejection in 4:03 for a +2.

Spurs-Cadavers: Sad Cav Ryan Hollins went 100% from the field (on one attempt) and even had two made free throws and a board in 10:09, only to foul four times and lose the rock twice for a 6:5 Voskuhl.

Wolves-Pissedons: Minnesota's Nikola Pekovic poked away a board and field goal in 12:25 as starting center with three fouls and two turnovers for a 5:3 Voskuhl.

For Oakland County, DaJaun Summers simmered down with a brick from Telegraph Road for a +1 in 4:33.

Hornets-Knicks: Jason Smith sired a foul and brick in 6:29 for a +2 that doubled as a 1:0 Madsen-level Voskuhl.

Pacers-Thunder: Nick Collison had a perfect percentage from the field (on a singular attempt) in 19:33, and even added on a trio of boards...only to foul four times and lose the rock twice for a 6:5 Voskuhl.

Frail Blazers-Purple Paupers: Darnell "Lacktion" Jackson traded in his Power Balance bracelet for a Game Genie to earn 42 seconds of hardwood time for a Mario, in which he also tossed a brick for a +1!

Dan B. said...
Basketbawful is a hell of a drug.

DanB - I don't think it's a prank, and I'm not sure Charlie Sheen ever had a mind to lose. He's blown past Lindsey Lohan and is into uncharted waters.

Anonymous said...
His seven gram quote was hilarious. Although a couple of the names he dropped would totally kick his ass in ganj/heroin/psychedelics/groupies/etc.
3/03/2011 10:46 AM

Lord Kerrance said...
That was magical.

Totally unrelated: I was randomly going through old posts the other day and I noticed that the Pickup Diaries just kind of stopped. What happened there?
3/03/2011 10:59 AM

Anonymous said...
worst basketbawful post ever, please stick to the good stuff, nobody cares about charlie sheen
3/03/2011 11:28 AM

@huynhjeff said...
What's with the anon trolls bringing down the latest posts of winning lately?

tabman said...
yeah seriously, one of the funniest posts i've read on here. i actually couldn't even tell if those sheen quotes were made up or real.
3/03/2011 1:21 PM

Anonymous said...
You know how fast he talks in interviews now? That's exactly how I read that post. I had no choice, my brain immediately went into Charlie Sheen imitation mode, and before you know it, I was reading at lightning speed while still being able to understand what I was reading. It was really weird, but also really funny.
3/03/2011 1:42 PM

Bluegrass Pundit said...
Charlie Sheen's cheese has completely slipped off his cracker. It is sad because he had a really funny sitcom. If you like funny stuff, check out the funny videos at Off Color Fun.
3/03/2011 7:12 PM