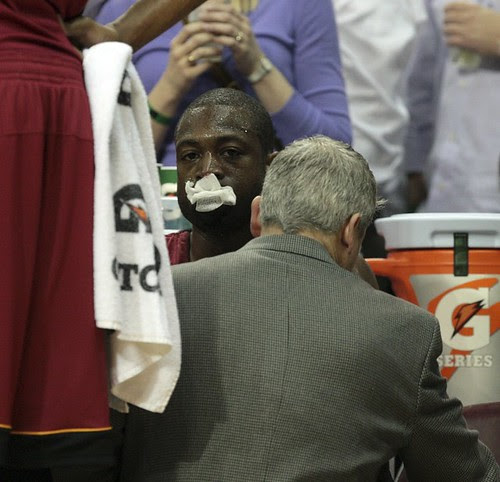 That silly Dwyane Wade... Always on the cutting edge of fashion with his crazy accessories!
If you haven't already done so, go read Bawful's stuff over at TrueHoop from today.

Quick complaint: Tomorrow is the annual rivalry grudge match between the University of Louisville and University of Kentucky basketball teams. So of course it's at noon on a weekday when I'll be at work since New Year's Eve is only a kinda sorta holiday. Great planning there, guys.

Here's an interesting NY Times piece on the "Mark Price Shooting Lab." The money quote from the article:

“I can’t think of a single guy who hasn’t improved working with us,” Kreutzer said.

This year, Rajon’s field-goal figures are improved. But his free-throw shooting has plunged to 43 percent, suggesting he may need a checkup.

So you can't measure how much better someone's shooting is by their shooting percentage? I think we need to reconsider the defintion of "better" shooting.

The best part about Tyreke the Freak's half-court buzzer beater? Check out Donte Green's reaction. He KNEW that shot was going in. What does this mean? We finally have proof that Donte Green is the real-life version of Biff Tannen. I wonder how much he wants for his copy of Gray's Sports Almanac... 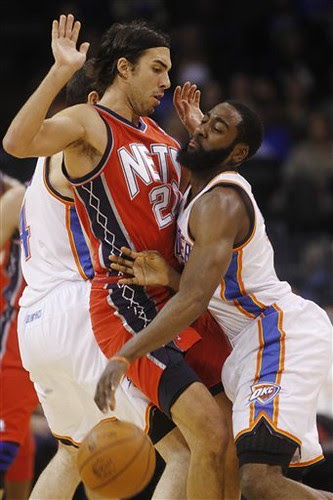 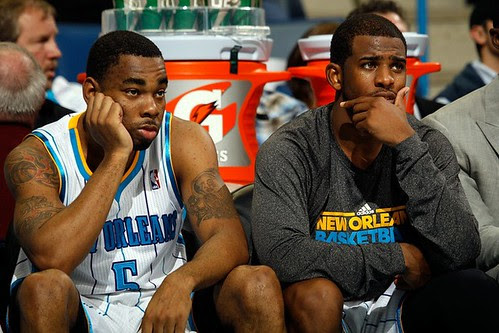 "God, this is worse than watching an episode of That 80s Show" 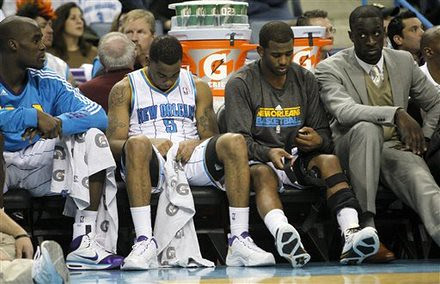 The sadness, it is overwhelming!

Nationally Televised Games:
Knicks at Magic, TNT, 7pm: I don't know about you, but after yesterday's video, I plan on watching Stan Van Gundy's face whenever Hedo shoots a jumper. Guaranteed entertainment!

Spurs at Mavericks, 9:30pm: Dallas is one of the few teams who have cracked the code to beating the Spurs this year. Unfortunately for them, Dirk is still banged up and will not play tonight. As far as MVP talks go, doesn't Dirk need to be pretty high on that list? The Mavericks look just godawful without him most of the time.

All The Other Games:
Jazz at Frail Blazers, 10pm: File this one under "things that make no sense and threaten to destroy my brain (or at least the parts of it I still use)" -- the Utah Jazz are 6-2 on the second night of back-to-backs this season. And you could make that number 7-2 if they win tonight. DOES NOT COMPUTE. This goes against everything we've ever been taught as basketball fans.

Anonymous said...
The answer for the Jazz record on back to backs is Jerry Sloan. For the simple reason that if anyone even LOOKS tired, he makes them walk back to Utah. BECAUSE THAT'S HOW THEY DID IT IN THE OLD DAYS GODDAMMIT.
12/30/2010 4:05 PM

Basketbawful said...
Dan, I didn't think you could find a picture today that cracked me up as much as yesterday's Brian Cardinal pic. But that Wade one is doing it to me. Eh, unintentionally dirty quote right there...
12/30/2010 4:35 PM

Anonymous said...
Just watched ORL - NYK highlights on NBA tv. Yeap, after a three by Hedo in the end of the game, SVG looked pretty pissed. Some brand new watch can be startet, I guess
12/31/2010 8:18 AM

Orlando looks pretty good ... against the Knicks. But I have to give yet greater kudos to Redick. The guy continues to add dimensions to his game and work his butt off. He's a very good role player asset at this point. Hard for a UNC fan to say that, but there it is.
12/31/2010 11:44 AM

This is pretty funny though, saw it during the Knicks-Orlando game last night.

Anonymous said...
Better shooting ability is not always directly measurable when what you see in the game includes shot selection, defense, and all other adjustments...in Rondo's case though, I'd say the free throws make a pretty strong case that he still has major issues.
1/03/2011 7:47 AM
Post a Comment
<< Home
Subscribe
RSS Feed
Mailing List