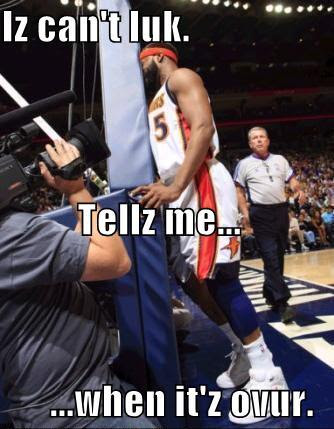 Golden State Warriors: Wow. Wow. I know the Warriors haven't been mathematically eliminated from the Western Conference playoffs, but it sure feels that way, doesn't it? And that "sort of almost" fact leaves me feeling empty and a little sad.

It's so weird. The Warriors will probably end up seven or eight games better than last year and still not make the playoffs. What went wrong? I mean, besides a ridiculously stacked Western Conference (their record would make them a solid fourth seed in the East). A lot of things, I guess. Chris Mullin gave away Jason Richardson, for starters. The rich and trendy people came in and spoiled what had been an amazing, old-school homecourt advantage. Don Nelson relied to heavily on a seven-man rotation that forced his big guns -- Baron Davis, Monta Ellis, and Stephen Jackson -- to log about 40 minutes a night. And, of course, the team never committed itself to playing defense; they're dead last in PPG allowed (108.4) and they rank 20th in Defensive Efficiency (giving up 106.2 points per 100 possessions).

I was so sure they'd win last night. So sure. Especially when they ran out to that huge lead. But B-Dizzle and Captain Jack...they look tired, man. And they only got more tired as the game went on. Davis played 46 minutes and shot 9-for-25 overall, 1-for-9 from downtown. Jackson put in 42 minutes and was 5-for-17 from the field, 2-for-6 on threes. Overall, the Warriors hit only 6 of their 27 three-point attempts. And as we all know, the three-ball is their bread and butter.

It's Nellie Ball at its best and worst. You live by the three, you die by the three. You depend on your best two or three players to have big games every night, and when they don't, you usually lose. Especially when you only get 7 points, 5 rebounds, and 1 assist out of your bench.

Utah Jazz: No offense to Dirk Nowitzki, because that game-winning three was one seriously clutchtastic basket. But why in the name of Odin was he so wide open? I know the play (if you can call it that) developed in transition and the Jazz were scattered all over the court, but there's no doubt in my mind that a Jerry Sloan-coached team has been specifically (and maybe profanely) instructed on what to do in such an end-of-game situation: Stick the opposing team's bests players. The Jazz didn't do that, and it cost them the game. Jason Terry said it best: "How do you leave the MVP wide open? It's unbelievable." Make that very unbelievable.

The biggest problem was that the Jazz players thought Dallas was going to call a timeout. Only...they didn't have any timeouts left. So, really, Utah should have expected what ended up happening. But they didn't. Ouch. (Thanks to everybody for the e-mails and comments about this one.)

Deron Williams: This may have been lost in all the excitement of that redonkulous banked three-pointer he hit to tie the game with six seconds left, but Williams fell down on the shot to try and draw a foul. And trust me, there was no contact. Said Williams: "I think I was just trying to flop a little bit." A little bit, yeah. That faux fall might not have had anything to do with Utah's inability to get back on transition and prevent Dirk's shot...but then again, it might have. And judging by his postgame comments, it did. "It happened so quick. I fell on the floor after the shot, looked up and the ball was advancing. Kyle (Korver) was back, pretty much by himself. I don't even know what happened, or how they got so open." That sound you just heard was Jerry Sloan grinding his teeth. In fact, his mouth might just have blown up.

Carlos Boozer: Has anybody else noticed that Boozer is in the midst of a mini-slump? Last night, he scored 10 points (4-for-9) and had 5 rebounds while almost fouling out. His previous three games against the Hornets (10 points, 5-for-14, 6 rebounds), Spurs (16 points, 7-for-16, 7 rebounds), and Timberwolves (12 points, 5-for-12, 7 rebounds) were pretty sub-par, too. For April he's averaging 12 points (on 34 percent shooting) and 6 rebounds...quite a dropoff from his season averages of 21.3 PPG (on 54 percent shooting) and 10.5 RPG. Is he secretly resting for the playoffs or something?

Los Angeles Clippers: Let me get this straight. Kobe scores only 16 points on 6-for-17 from the field, Derek Fisher shoots 3-for-10, and the Clippers still get blown out by 28 points? They are who we thought they were.

ESPN box scores: This picture was send in by Basketbawful reader Sky Flakes, who is with me in wondering: Who called time out?

Anonymous said...
the worst is KG and Pierce
TERrrrrible they just irritate me more than anyone else's jersey popping.
their teams BLEW chunks last year
4/11/2008 10:52 AM

Stephen Robbins said...
As someone who has spent the last 4 years in Utah, I know better than to make fun of the Mail Man. But you can't defend the hand-behind-the-head layin/dunk. You just can't.

BTW, that reminds me of my first semester here in Utah. My roommate tried to argue that Stockton/Malone was the best player ever (better than Jordan, who by the way, DEFINITELY pushed off), failing to take into account that they were actually two different players.
4/11/2008 11:01 AM

Anonymous said...
bawful-i suggest a season ending basketbawful to total up the seasons worst...and when you do it, dont forget the worst...Stephen Jackson...his stupid ass suspension in the beginning of the season is going to cost the warriors multimillions in revenue, his team the playoffs, and us a chance to watch them this postseason..i Thanks captain Jack-and dont get high tonight.
4/11/2008 11:05 AM

Basketbawful said...
shrugz -- Yeah. I...hate to admit it, but you're right. Larry, Kevin and Robert never popped their jerseys.

stephanie g -- Dirk's jersey pop is a little awkward but effective, just like everything else about him.

Actually, back in college, me and my roommate were huge Jazz fans, and we watched some ESPN special on them, and Larry Miller finished the segment with the following cryptic statement: "John Stockton is Karl Malone, and Karl Malone is John Stockton." And then they showed a picture of the two men hugging, and Stockton had this fruity smile on his face that make my roommate scream out "Gay elf love!"

My point? People in Utah really do think they were the same person.

Anonymous said...
Jersey popping is definitely not classy, but I think it can be hilarious if done by the right player. I agree that KG and Pierce jersey popping is poor to say the least, even though I like those two guys, but for the sake of the playoffs, I'd rather just laugh at and appreciate Dirk Nasty than discourage him from doing anything. If he wanted to pull off his shirt and flex and pose I'd let that happen so long as he stays in "I'm not taking any shit" mode. I just hope he starts staring people down. That would put me on the floor.
4/11/2008 11:36 AM

Regarding how the Warriors will end up winning 7 or 8 games more than last year and still miss the playoffs, the announcers last night had a great point: imagine what it's going to be like next year. The Clippers will (may) get Elton Brand back, may get Shaun Livingston back, Al Thornton will be in his 2nd year and the Clips will have a high lottery pick. The Blazers will be a year older and will get back Oden, plus will have a lottery pick and have a plethora of good pieces to make great trades with. The Kings have a bunch of great young players and will get to add a lottery pick. Even the Grizzlies and Timberwolves have real solid young cores in place and will both have real high lottery picks. Is there going to be even one bad team in the West next year?

Charles was probably right in his assessment of how Dirk was so wide open for that game winner last night when he said the Jazz probably didn't realize that Dallas had no timeouts remaining after D-Will hit that shot. It looked like they expected a timeout after he banked it in, but instead Eddie Jones raced it up court before they knew what was happening.

It's kinda mean to pile on the Clips at this point after the year they've had with injuries. Mike Dunleavy Sr. this year has had the worst job since keymaster.
4/11/2008 1:27 PM

The DL said...
Dirk's jersey pops are made even worse by his lack of ability. You put your thumbs in the sleeve-holes and push forward, the bottom of the jersey should remain untouched.
4/11/2008 1:40 PM

JC said...
Who was the genius who thought that Lakers/Clippers was a better primetime TNT game than Jazz/Mavericks?

As a Jazz homer that shot ruined my Friday. I did think they'd lose, but to lose that way is like dancing with a super hot girl and thinking you've sealed the deal when her BF comes and hauls her drunk ass away.
4/11/2008 3:35 PM

Anonymous said...
Was that a matrix reference wild yams or is that the nickname of a coach? If it was matrix it was hilarious, felt sorry for that poor bastard who always got shot at...
4/12/2008 8:28 AM
Post a Comment
<< Home
Subscribe
RSS Feed
Mailing List