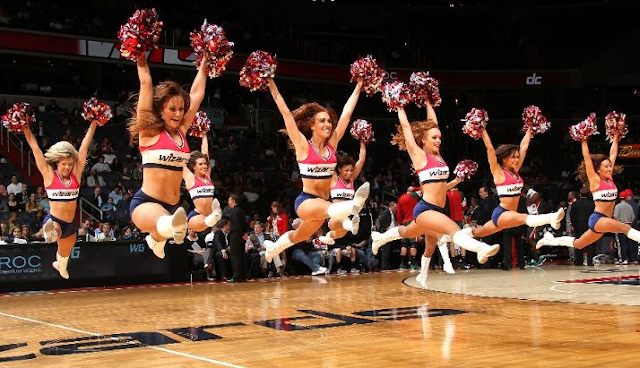 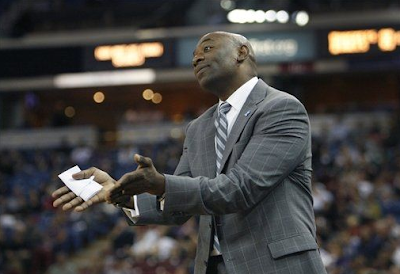 After getting kicked out of the Justice League for painting Wonder Woman's invisible plane, Keith Smart does training for his next job on the streets: Begging. 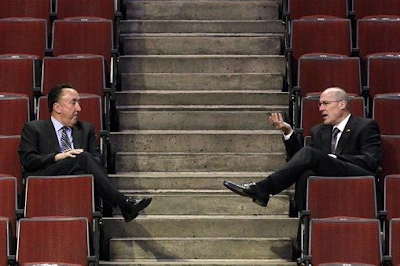 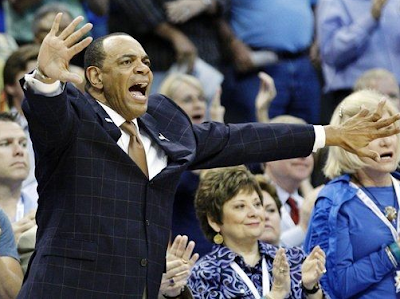 Coach Hollins tries to shield the fans from watching his team butcher the pick and roll, only to horrify them even more with his fingers

Dallas Mavericks:  Well, I'm gonna go out on a limb and assume the Mavs are still celebrating last year's championship, because the team they've been putting out on the floor these past few weeks would struggle even in the WNBA.

Getting blown out at home to the Flippers, the Mavs got outscored in every single quarter, with the deficit growing to be as large as 22 points.

To add insult to injury, the Mavs allowed Randy Foye, a 39% shooter, go off for more 3 pointers (8) than the entire Mavs team.

"We just couldn't get the ball to fall for us and Foye was hitting dagger after dagger," Delonte West said. "All those 3's, it takes a lot out of you"

"I haven't been drilled like that since LeBron's mother"

Dallas is now just 2 games from falling out of the 8th playoff spot:

Oklahoma City:  The Thunder outshot the Grizz, got just as many free throws, had the same amount of rebounds, hit more three pointers.....and still lost.

Despite blowing up every team who are at the top of the standings, the Thunder decided it was time to party like it's 2009 and fall to the Grizzlies.

OKC gave up 18 turnovers and when you lose by 6, that obviously made all the difference.  A surprising stat at first, until you see who is virtually at the top in giving up the ball

"They didn't turn the ball over. A lot of people think we just get the ball out and run. Our fast-break points usually come off of us playing defense and tonight they took care of the ball a little better," Durant said. "We missed some in transition as well but, all in all, they did a great job."

No no Durant, the Grizzlies did turn it over, at least 10 times.  But when you're out turning over (that's English, right?) the opposition 2 to 1, it probably feels like the other team doesn't lose the ball very often.

That would be the Spurs on the Thunder's necks, who are now just 1 game out of first place in the West.

Chicago Bulls:  You know that feeling when you're up up 15, being part of a team that has gone 86 games without losing back to back games (a record only matched by the 1997 Utah Jazz), and you look out into the crowd, and bask in the glory of thousands of adoring fans?

Well, unless you play for the Bobcats, the feeling was all too real for the Bulls who looked like they were gonna massacre the Houston Comets, on their way to keeping the best record in the NBA.

And then you realize, oh damn, it's only halftime!

The Bulls got outscored in the third quarter 19-31, allowing 6 Rocket players to shoot over 50% from the floor.

And that's just the good news.

Chicago went an Antoine Walker-esque 5-17 from 3 point land, saw that 3 point percentage, and thought to make up for it in the free throw department (8-17), but failed in that as well.

The Bulls fell in back to back games for the first time in ages, and Derrick Rose is nowhere to be found.

Oh, and did I mention 19 turnovers? Cause that totally happened.

Washington Wizards Generals:  And what would be a 'Bawful post without one of the teams that provides us with the best comedy night and night out?

This was one of the better games for the Wizards, as they allowed themselves to only get down by as many as 23 points to the Bucks, as oppose to the usual 33 every night.

"I don't think we had the bounce in our legs tonight that I've seen," Washington coach Randy Wittman said. "We were down on ourselves a couple of times. I felt it in our huddle."

Wittman went on to add "But then I realized, hey, we're the Wizards, and we've been down on ourselves every night.  So at least that aspect of our game has stayed consistent"

Also, what kind of bizzarro world do we live in where Monta Ellis only takes 11 shots?  He was very close to taking only 10, which would give him the 6th highest number of shot attempts on the team.

The Bucks won, but I'm totally waiting for those nights where Monta can jack up 25 shots a game. I guess with Brandon Jennings on your side, the competition is gonna be tough.

Spurs at Cavs:  SA finally has everyone healthy, but ask me again in a week and that will probably change.

Knicks at Pacers: Here is the story of two teams going in completely opposite directions.  I'll let you figure out which team plays what role.

Bobscraps at Craptors: In the industry, we call this matchup a 2 1/2 hour bathroom break.

Magic at Pistons: After blowing that game to Dallas, the NBA had to throw the Magic a bone.  I'm sure after the trade deadline next season, the NBA will probably have to schedule the Magic to play the Pistons every night.


Sixers at Heat:  This should be a great matchup!....Until you read the following:

"A visit from the 76ers (29-23) could also help. The Heat have dominated this series of late, taking 10 straight regular-season meetings by 12.4 points per contest. They've won 16 of 18 home meetings when their three wins in the first round of the playoffs last season are included."

Warriors at Grizzlies:  The Grizz are looking for their 6th straight win against the Warriors.  Common logic tells me they'll get it.

Nyets at Lakers:  A picture is worth a thousand words:

Speaking of pictures, congrats to Kentucky for winning the 2012 NCAA Championship.  Anthony Davis said that he looks forward to growing as a player and making all the necessary changes to succeed:

Bucks-Generals: Jon Leuer lacked it up with a +2 in 167 seconds via brick and foul.


Rockets-Bulls: Jimmy Butler jaunted into a quest with Link for a mere 21 seconds to earn a Mario.


Clippers-Mavs: Dominique Jones floated a stock split worth 2.95 trillion (178 seconds) for the Mavs.


Jazz-Frail Blazers: Joel Przybilla felled three boards in 21:56 with a brick, four fouls and a turnover for a 5:3 Voskuhl, while Hasheem Thabeet can now go to the same golf courses as Paul Allen after a 1.65 trillion (100 seconds).

Naz said...
"For the Clippers, this is their first 6 game win streak in 20 years, you know back when Michael Jackson played with kids his own age."

winnetou said...
It was a bit of a surprise to see the Kobe Controller posted (without a "call for ball" button, unless that's what shoot does off-ball) without any mention of his performance on Saturday vs the Hornets: 3/21 FGM/A, 1/8 3PM/A. And to boot, quoting straight from the game story:

THE STAT: Bryant was 0-for-7 from 3-point territory and 0-for-15 from the field before burying the go-ahead 3-pointer.

JJ said...
Raza, that was an awesome post. Many lines that made me (literally) LOL. I especially loved the Kobe controller and Anthony Davis pictures. I thought Michael Jackson joke was a little low blow (only because he's dead now), but I admit it made me laugh. Looking forward to the next post!
4/03/2012 11:38 AM

stephanie g said...
Flippers? I don't think dolphins are known for flopping; on the contrary, they're graceful creatures. Or maybe you're saying they Clips are full of chromosomal abnormalities. I can buy that.
4/03/2012 12:20 PM

David said...
I saw this picture on the Golden State of Mind blog. Our chances of getting into the top 7 on draft day are looking pretty good...

steph - full of chromosomal abnormalities, in regards to the Clippers and judging by how Chauncey Billups looks, that sounds about right.

Raza said...
kazam - Yeah, it's so weird how he looks so normal without that awful unibrow!

matt - appreciate it buddy, but hopefully once you're done with training you can provide us with even better captions like you always do my man
4/03/2012 4:32 PM

in the middle of that hard news piece is a link to DJ Gallo's comedy site. No joke.

Wormboy said...
This is brutal:

Anonymous said...
Ha Ha.. I laughed loudly at the Spurs gif and the Anthony Davis "shave" and my co-workers were alarmed :)

Wormboy - That comparison to the Awakening made my day. Brilliant stuff!