Well, this weekend was the annual Halloween Party, and while Basketbawful and his pals decided jointly on a cowboy theme, I, of course, had to maintain my abnormal obsession with Larry Bird (and I'm too cheap to get all authentic with the cowboy gear).

However, I wasn't just repeating the same costume as last year. No, sir. This year, I put a different slant on it that I think made the getup far more clever than just a Larry Legend rehash. See if you can guess what I am.

Hint: I might be confused with an iPhone app. 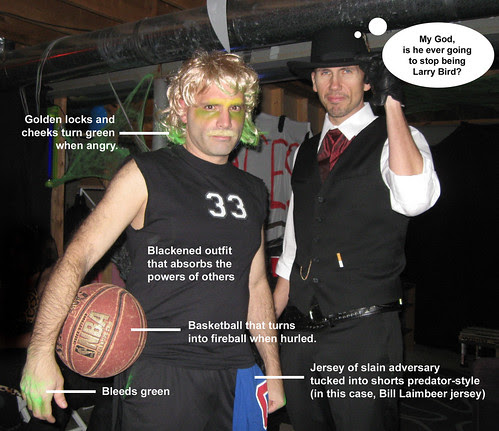 Yup, that's right. Much like the Superfriends have their Bizarro counterparts, much like I have my own arrogant, hyper-competitive alter-ego, Evil Ted, so does Larry Bird have his own dark doppelganger... 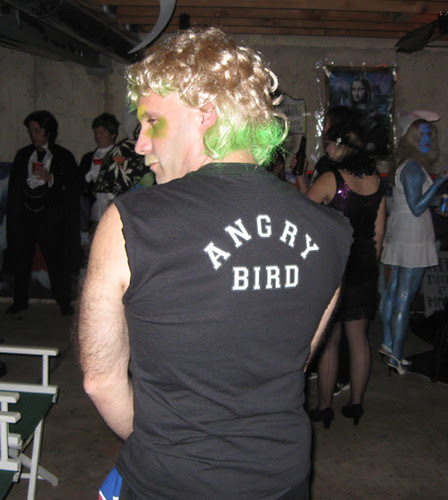 I think Angry Bird is going catch on, much like his feathery iPhone counterparts - I mean, come on...glowing locks, green blood, fireball basketballs? This is a comic book hero waiting to happen. 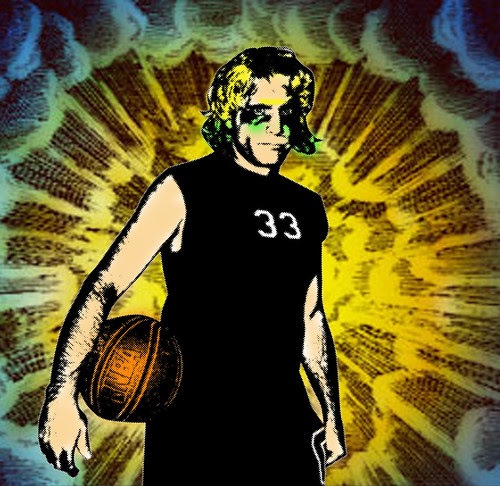 With the lockout doing such a number on our little corner of the world - I call on you, Bawful readers, to submit your most awesome Halloween costume pictures (basketball related or not) to me at ted.evil@gmail.com, and assuming the picture isn't obscene, we'll post it in an amusing collage of pics with other Bawful folks.

Oh, and I appear to be on Twitter now. It's a great way to communicate with people in a frequent, brief, lazy manner. This could be a perfect medium, given that I think many Bawful readers collectively feel they've had enough of me after 140 characters anyway.

AK Dave said...
I was thinking that 'Bawful was going for the "Elegant Suit" look from "Red Dead Redemption".

chris said...
Dan B.: Obviously, a look that is appropriate for...

Anonymous said...
Why are you so lame, Evil Ted?

It's not about your writing; you're good, you're funny and I like it.

It's just you. You freak out when people criticize you (ON THE FUCKING INTERNET), you talk about yourself the way that we did when we were 8, and you don't seem to have anyone around to tell you what a goddamned loser you can be.
11/27/2011 11:32 PM
Post a Comment
<< Home
Subscribe
RSS Feed
Mailing List