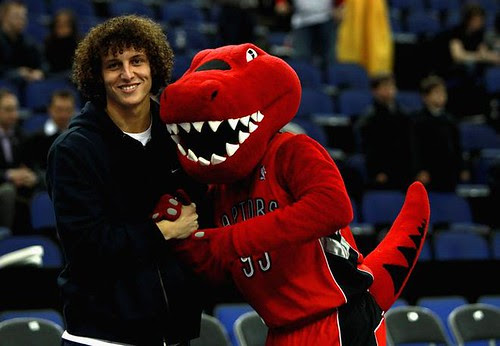 "You soccer football players sure are good at diving, but have you ever seen me dive while on rollerskates?"
We're getting deeper into the month of March. You know what that means: clanked trey after clanked trey, lots of random pointless passing to kill a 35-second shot clock, and the ever-annoying possession arrow. I live in college basketball country, where few people give a crap about the pros, but I really just don't get it. Yeah, I watch some college basketball. But I always end up feeling frustrated by the poor play, inferior rules, and the fact that there are approximately 18,391 teams that I am supposed to know about come tournament time. Can we please get to the NBA playoffs sometime soon? 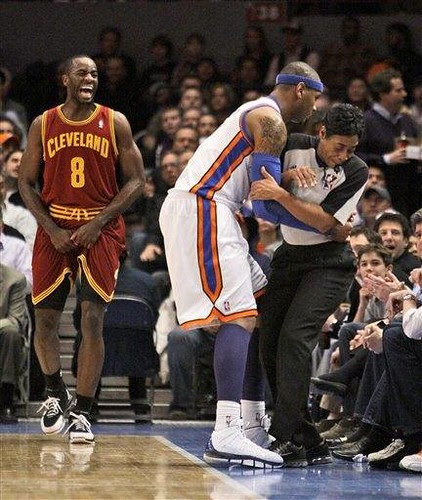 Caption This!
What's up with Carmelo Anthony and Violet Palmer? And just what in the hell is Christian Eyenga doing? 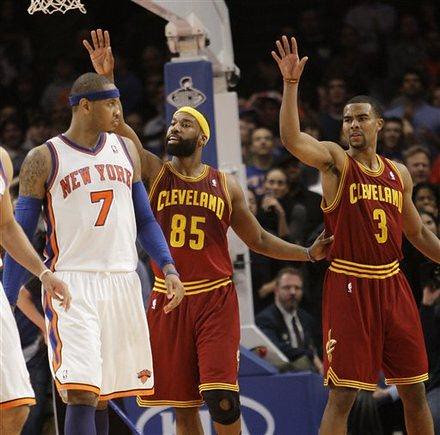 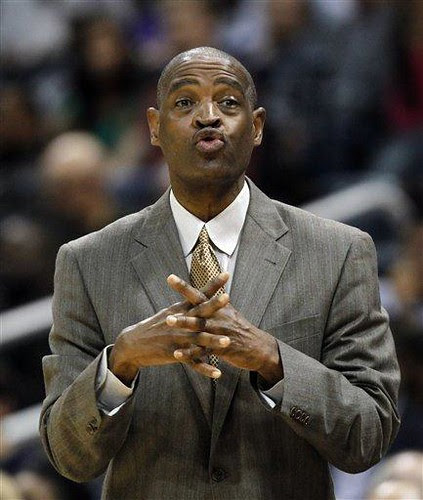 Larry Drew and Birdman Andersen, is there something you need to tell us? 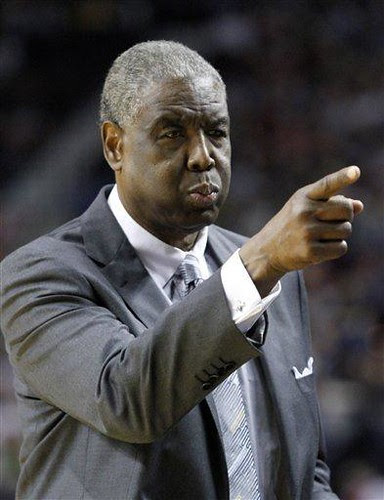 Oh come on, Silas. Quit trying to blame it on someone else. Everyone knows he who smelled it, dealt it. 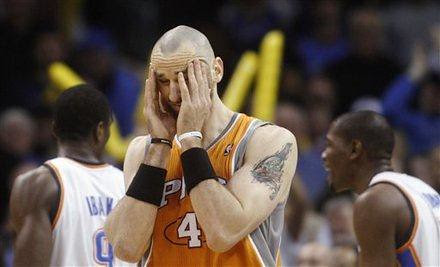 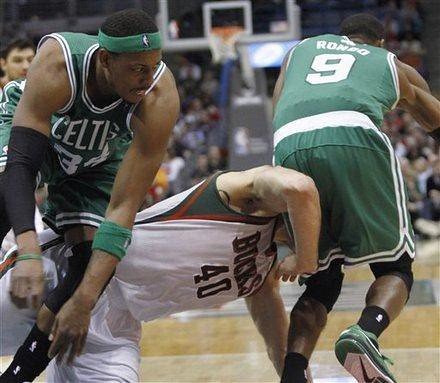 I'm not sure what's happening here, but it sure looks bawful, and it doesn't surprise me that Jon Brockman is involved 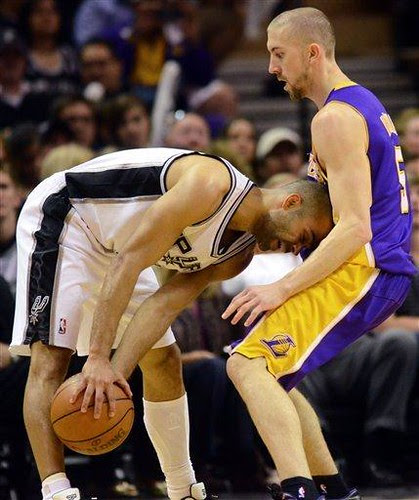 Uh, Tony, I'm pretty sure "Headbutting" is an offensive foul just like charging

All The Games:
Frail Blazers at Magic, 7pm: Those who had early March on their "when will Dwight Howard get suspended for picking up too many technical fouls" office pools, please collect your winnings.

Hornets at Bulls, 8pm: So much for that epic Chris Paul/Derrick Rose matchup. By the way, if you haven't read Lee Jenkins' recent SI feature on Derrick Rose, I highly recommend it.

Mavericks at Timberwolves, 8pm: Nobody really cares about who wins or loses this game. We just want to see if Kevin Love can tie Moses Malone's double-double streak. (And I apologize in advance if I just stat cursed the hell out of Kevin Love. I really hope I didn't.)

Thunder at Grizzlies, 8pm: What's more odd: that Zach Randolph has transformed into one of the best power forwards in the NBA, or that we've basically come to accept this as fact and no longer give it much thought? Wasn't Z-Bo headlining our friggin' banner mere months ago?

Rockets at Kings, 10pm: And the sad saga of the Maloofs screwing over Sacramento continues. I'm really, really not looking forward to the Anaheim Kings.

chris said...
Nice little billboard posted off of the Business 80 freeway in Sacramento:

kazam92 said...
Oh how I mocked the Knicks for pairing Randolph and Curry. But he's always been a damn great player, just an utter headcase. Memphis got him for a sack of potatoes and he seems to be getting it together. That game winner was pure awesome
3/07/2011 6:30 PM

The Dude Abides said...
The funny thing about that Tony Parker/Steve Blake photo was that BLAKE was actually whistled for a foul on that play. Phil was so angry at the call that he leaped out of his chair* and yelled at the officials for 30 seconds.

Marc d. said...
"A lot of what we call talent is the desire to practice."

Marc d. said...
Ooops forgot the link. It's good reading for anybody:

Paul said...
Portland in a dogfight against Orlando. Just the kind of break Miami is needing for their tomorrow night match up against them.

Paul said...
I keep wondering why nobody tried to get Kaman from the Clippers.
The Clippers are set with Griffin and DeAndre Jordan. And you bet Sterling will not pay Kaman if he can have Jordan for cheaper.

Is Kaman value really that low that nobody showed interest on him?
He is big, got a sweet mid range jumper, he is big, got a couple of nice post moves, he is big, he is a more than decent rebounder and shot blocker and did I mention he is big?

kazam92 said...
Kaman had a bad contract I think. There has to be an option there somewhere But he would be ideal in Miami. Just remember Riley wanted Bosh and thought about Kaman before "settling" on Wade.
3/07/2011 10:06 PM

Anonymous said...
Kaman makes too much money and if you look at advanced metrics he's uh...well, he's really not that good. By WS and WP he's a huge underachiever and those metrics are inherently biased towards bigs.

For a center he takes a lot of bad, low percentage shots and his passing is not great.

It's really no coincidence to me that Kaman got injured and then Blake's ROY/all-star season started coming together. Once Kaman got off the stage and Blake got to see the ball a little more, people realized this kid was gonna be pretty good after all.
3/08/2011 1:47 AM

Wolfez said...
Speaking of Z-Bo, Minnesota’s last night loss to Dallas makes Kevin Love, unless dramatically drop of his numbers, the first 20-10-50 club inductee of the decade, celebrating the legacy of Randolph himself and giants as Derrick Coleman, Pervis Ellison or Abdur-Rahim.
He is the second “Kevin” in achieving that epic goal for the Timberpoops after Garnett 06-07 season, and the fourth in five years for Minny including 07-08 and 08-09 Al Jefferson’s brilliant performances.
Minnesota, the land of the losing big men.
3/08/2011 4:38 AM