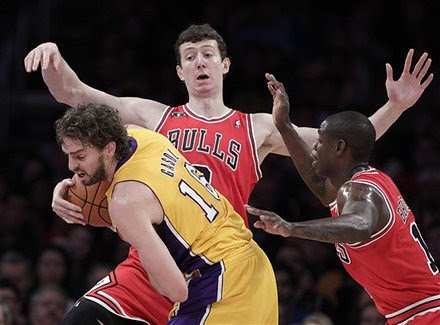 Look out, Pau! Zombie Omer Asik is coming for your brains!
I love basketball. Check out the story behind this seven overtime Division III thriller. Then check out the box score and notice that two players managed to get one trillions in this game. Glorious! Also, you have to appreciate Lance Spratling's 0-for-13 effort from downtown in the 75 minute effort he gave his team. (Yes, he played 75 minutes. That is not a typo.) 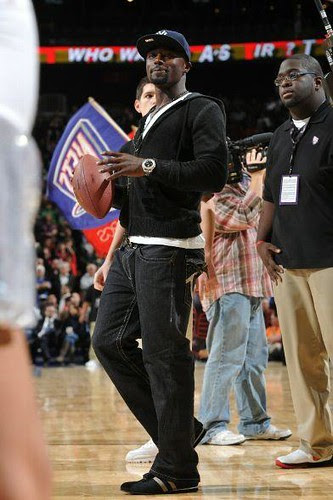 "I better carry this football around so nobody confuses me for a Nyets player!" 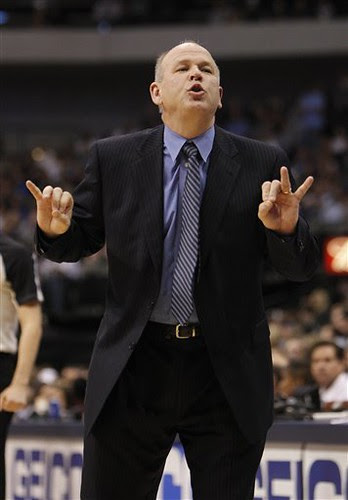 Huh. I barely recognized John Kuester without his palm pressed against his face

Nationally Televised Games:
Heat at Magic, ESPN, 7:30pm: Going down the checklist, the Heat are lacking size, injured, have questionable chemistry, and the Magic will be in full revenge-game mode after they got stomped earlier this season. This could be fun!

All The Other Games:
Bucks at Cavaliers, 7pm: We've got two struggling teams working three game losing streaks. And it's certainly understandable why Milwaukee isn't winning. NBA-worst shooting percentage and fewer points per game is not a good way to win games, no matter how good your defense is. You still have to score more points than the other team. Do they understand this? Does Scott Skiles need to call a team meeting to remind them about basic fundamentals of math?

76ers at Craptors, 7pm: I get that the Craptors are "rebuilding" since they no longer have Chris Bosh to be, well, like a Bosh. That being said, can you really count acquiring Jerryd Bayless and Peja Stojakovic as "rebuilding?" Oh well, it doesn't matter. They're still better than Philly. Barely.

Knicks at Bobcraps, 7pm: As pointed out by Mike Mai in WOTN comments, the Knicks are on a 4 game winning streak. Their next 4 opponents: Dirty Birds, Pissed-Ons, Nyets, and tonight they play the Bobcraps. It's very possible they can reel off an eight game win streak and destroy the universe in the process. I'm scared.

Nyets at Celtics, 7:30pm: Rondo's out again, and I'd just like to remind everyone that the Celtics somehow managed to lose to last year's horrific version of the Nyets. Ugghhhhhhhh. Can they possibly get a third consecutive big game out of Nate Robinson?

Spurs at Timberwolves, 8pm: I don't care if Darko's caught on fire like a barrel full of oily rags in an oxygen chamber. The Timberwolves are allowing over 110 points per game, and the Spurs are the kind of smart, brutal team that will step on your throat when they get you down. I expect a blowout here, period. So, yes, when the Spurs manage to lose this game or something, I give you full permission to point and laugh at me.

Mavericks at Thunder, 8pm: I'm not going to lie -- I'm disappointed this game isn't on ESPN instead of the Heat-Magic game.

Pistons at Grizzlies, 8pm: Good news, Grizzlies fans! You have the cheapest average ticket price in the NBA! Not that you should pay that kind of price to see this game, but still.

Warriors at Rockets, 8:30pm: Remember the last time these two met up? They combined for 260 points. Pro tip: stopping the other team from scoring is sometimes a good idea, guys.

Bulls at Suns, 9pm: Okay, the Circus Trip is bound to be wearing the Bulls down by this point. I understand. That being said, have you seen Phoenix play defense this year? No, of course you haven't. Nobody has.

Hornets at Jazz, 9pm: This is not a good time to face Chris Paul. His team just lost a trap game to the friggin' Clippers. That's embarrassing. They will be out for blood. Be careful, Utah. New Orleans is gonna come out swinging and looking to knock them out like Sergio Martinez did to Paul Williams the other night.

On being booed everywhere he goes: “It is funny that Memphis fans and fans in the league -- some of the fans that had nothing to do with what I did -- still boo like I was sitting in their room saying I was coming to Memphis,”

LeBron, *everyone* had something to do with what you did, because you did it in an hour-long ESPN special. You came into ESPN watchers' living rooms with an astonishing display of narcissism and arrogance, announcing that "Imma take my talents to south beach" and not even taking the time to thank your fans in Cleveland or elsewhere. You single-handedly turned Carlos Boozer's move to Utah into only history's second most douchebaggish departure from Cleveland. And you continue to act as though every bit of your behavior was completely appropriate. Your "what should I do" commercial isn't an attempt to get advice to set things right, it's an attempt to justify your own actions and get people off your back.

If you're concerned with the boos, maybe you should start by seriously asking "what should I do?" and listening to the responses you get. Don't try to fix your image by deflecting blame and defending your actions; it just makes you look like an ignorant jerk.
11/24/2010 4:32 PM

Czernobog said...
Peja has a huge expiring contract, he'll most likely be gone by the trade deadline.

Wild Yams said...
This is probably a fluke, but the Timberwolves are looking really impressive against the Spurs right now. That Darko, Love, Beasley frontline is beginning to look pretty damn good. How weird is that? If Ricky Rubio ever does come to play for Minnesota, they could have a pretty good young team up there.
11/24/2010 7:57 PM

The Unknown Miner said...
I found an interesting website aimed at locking King Crab out of the All-Star game like the whole MJ/Isaiah nonsense.

stephanie g said...
Who are you? And what have you done with Dwyane Wade?

charade said...
Jesus. Let's hope we never have to hear JVG ask Mark Jackson "what boat did you come over on?" again.

Mid-game, for no apparent reason whatsoever, Jeff Van Gundy turns to Mark Jackson and says: "I came over on the Nina, which ship did YOU come over on?"

ak dave said...
WTF Darko is the #1 Option on offense, and just scored a clutch bucket against TIM DUNCAN one-on-one in the post with :30 to go.

Unknown said...
In light of the Heat losing against a team they stomped early in the season, I feel I have to repeat:

From J.J. Hickson, "I don't know anything about that saving stuff."

Torgo said...
I'm sorry, I know my last comments about games have been complaints against referees, but since when is Gary Neal treated like Reggie Miller? I get that the Timberwolves don't have a good reputation with the refs and everything, but come on. give us few fans a bone or two, please.

The Dude Abides said...
Damn...the final minute of regulation in that Minny-San Antonio game must be a microcosm of why Suns fans hate the Spurs (besides the losing). Manu throws his off arm out on a drive, the ref calls the foul on Darko, Manu gets the bucket and the three-pt play. Cuts the deficit to one point. Love makes two FTs on the other end, Minny up three, 19 seconds left. Then a San Antonio ROOKIE kicks his leg out on a three-pt attempt, makes contact with the Minny defender running by him, and the refs fall for it. Three FTs, tie game. Minny runs the clock down, Ridnour drives past McDyess, who shoves him on the hip and knocks him off balance, then blocks his shot. Overtime. The moral of the story? Don't be a Timberwolf ROFL
11/24/2010 10:21 PM


"I know there's a lot of time in the day, but I'd be more confident if he didn't know what was going on in the NBA," Van Gundy said, chuckling about Obama's remarks. "We got to get some people back to work. I don't think he needs to be worried about turning the Heat around. Let (Heat coach) Erik (Spoelstra) worry about that, because Erik certainly isn't turning the economy around."

HeyRiles said...
So I went to the Orlando/Miami game tonight

There was a fair-weather bandwagon Heat fan that would not stop popping his Bosh jersey whenever the Heat made a decent play. He ended up leaving with about a minute left in the game after heckling everyone around him for booing LeBron everytime he touched the ball

I really never thought I could experience this much joy in another man's misfortune. Normally I don't find happiness when others are upset, but now I can only smile at any picture of a dejected fan wearing a Heat jersey. Hopefully there will be enough pictures of sad Heat fans soon so that there can be a whole post dedicated to such a montage. I would bookmark it, Tweet it, Facebook it, print out the URL and snail mail it to every friend in my address book

These are the words Bawful'd never have expected to see written down in a serious article. I have a hard time believing it myself.
11/25/2010 9:26 AM

Dan B. said...
The moral of the story? Don't be a Timberwolf ROFL

Czernobog said...
Anyone still surprised about Deron horoughly outplaying Chris Paul when they face each other? No one? Good.
11/25/2010 10:03 AM

The Dude Abides: I watched the last 3min of that game, and the Wolves got absolutely hosed. That "foul" Neal drew for 3 freebies was pretty suspect. Also, Ridnour got hip-checked to the ground by McDyess on the last play almost as badly as the Horry-Nash incident; no call. Dwayne Wade would have needed a wheelchair if he got fouled like that.