Monday, December 08, 2008
Basketbawful versus the YouTube Grinches
By Basketbawful at 9:19 AM
13 comments 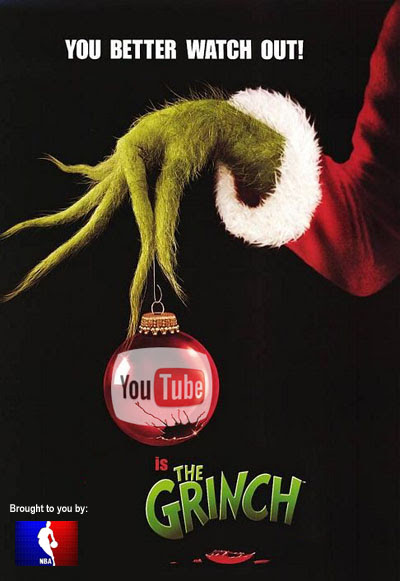 As some of you already know, the Grinches at YouTube did everything they could to steal Birdmas, repeatedly removing our The Night Before Birdmas video for their own grinchy purposes. Well, Birdmas is bigger than little things like laws and copyrights. So it's still available, both on YouTube and MySpace. So there.

In response to this outrage, Evil ted composed the following poem:

Every Fan Down in Fanville Liked Birdmas a lot...
But the Youtube Grinch,Who lived north of Fanville, Did NOT!
The Youtube Grinch hated Birdmas! The whole Birdmas season!
Now, please don't ask why. No one quite knows the reason.
But I think that the most likely reason of all,
May have been that his heart was two sizes too small.
Or maybe the Grinchness came from the fools,
Who enforce the NBA’s rebroadcasting rules.
It takes a true Grinchness to rob fans of a visual toy,
Meant only to bring them some warm Birdmas joy...

You can read the rest of the poem in the comments section. Oh, and look for the Japanese version, coming soon to a free video provider near you (unless YouTube Bird-blocks us again): 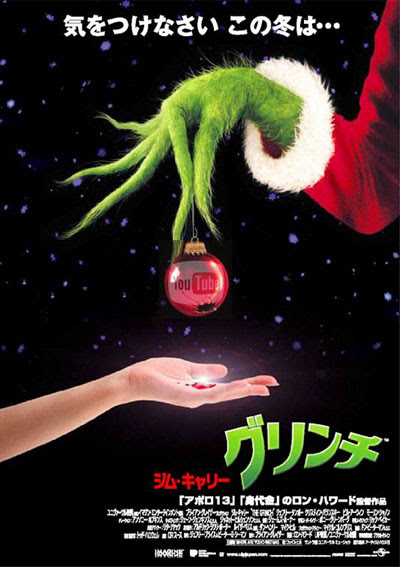 Every Fan Down in Fanville Liked Birdmas a lot...
But the Youtube Grinch,Who lived north of Fanville, Did NOT!
The Youtube Grinch hated Birdmas! The whole Birdmas season!
Now, please don't ask why. No one quite knows the reason.
But I think that the most likely reason of all,
May have been that his heart was two sizes too small.
Or maybe the Grinchness came from the fools,
Who enforce the NBA’s rebroadcasting rules.
It takes a true Grinchness to rob fans of a visual toy,
Meant only to bring them some warm Birdmas joy…
The Youtube Grinch growled, his fingers nervously drumming,
"I MUST find some way to stop Birdmas from coming!"
"I know just what to do!" The Youtube Grinch laughed in his throat.
And he made a quick Santa Larry green hat and green coat.
And he chuckled, and clucked, "This off I will carry!"
"With this coat and this hat, I look just like Saint Larry!"
"All I need is a reindeer..." The Grinch looked around.
But, since reindeer are scarce, there was none to be found.
So he called his dog, Stern, then he took some green thread,
And he tied a big Celtic logo on the top of his head.
Then he loaded some bags and placed them in turn,
On a ramshackle sleigh And he hitched up old Stern.
Then the Grinch said, "Giddap!" And the sleigh started down,
Toward the homes where the Fans Lay asnooze in their town.
They dreamt about Larry and about how tomorrow they’d dine.
And had further sweet dreams ‘bout the Rambis clothesline.
Then he slithered and slunk, with a smile most unpleasant,
Around the whole town, and he took every present!
Basketballs! Jerseys! Ball pumps! Shorty-shorts!
Green sneakers! Hick popcorn! And videos on sports!
And he stuffed them in bags. Then the Grinch, very nimbly,
Stuffed all the bags, one by one, up the chimney!
It was quarter past dawn... All the Fans, still a-bed,
All the Fans, still asnooze, when he packed up his sled,
Three thousand feet up! Up the side of Mt. Wilt,
He rode with his load to dump it out, to the hilt!
"PoohPooh to the Fans!" he was grinchishly humming.
"They're finding out now that no Birdmas is coming!"
"They're just waking up! I know just what they'll do!"
"Their mouths will hang open in a mortified howl,
Then the Fans down in Fanville will all cry ‘HARD FOUL!’"
"That's a noise," grinned the Grinch, "That I simply MUST hear!"
So he paused. And the Grinch put his hand to his ear.
And he did hear a sound rising over the snow.
It started in low. Then it started to grow.
But the sound wasn't sad! Why, this sound sounded merry!
It couldn't be so! But it WAS merry! VERY!
He stared down at Fanville! The Grinch popped his eyes!
Then he shook! What he saw was a shocking surprise!
Every Fan down in Fanville, the tall and the small,
Was singing! Without any presents at all!
He HADN'T stopped Birdmas from coming! IT CAME!
Somehow or other, it came just the same!
And the Grinch, with his grinch-feet ice-cold in the snow,
Stood puzzling and puzzling: "How could it be so?"
"It came with out Basketballs! It came without shorts!"
"It came without Jerseys, or videos of sports!"
And he puzzled three hours, till his puzzler was sore.
Then the Grinch thought of something he hadn't before!
"Maybe Birdmas," he thought, "doesn't come from a store."
"Maybe Birdmas...perhaps...means a little bit more!"
And what happened then? Well, we know what should,
Youtube would have granted NBA fans what is good.
But instead they hide behind stuff called the law,
That keeps us from showing us Larry’s videos raw.
So Evil Ted took out the clips that offended,
And reissued the video, though not as intended.
And for good measure, so all could share in the grace,
He added the poem to a spot on myspace.
So remember this, all who would wish Birdmas ill,
There is no way to stop it, it will give us our fill.
For the feelings we have toward Larry and the C’s,
Does not come in videos, or on DVD’s.
In comes from inside us, in an emotion we feel,
When we think about Larry, and the Pistons, and "The Steal."
You cannot take it from us, no matter how hard you try,
Not Youtube, not Laker fans, not lawyers so sly.
And as Larry rides off in his sleigh full of cool,
He calls "Happy Birdmas to all, and to hell with the rules."
12/08/2008 9:37 AM

Wild Yams said...
Honestly I wouldn't be surprised if it was just some overly sensitive Laker fan who was flagging your video repeatedly.
12/08/2008 9:49 AM

I wore my Larry Bird jersey all weekend in honor of this holiest of holy days.

At my pick-up gathering I told everyone I wanted 13 crisp passes before every shot attempt and maximum effort for every loose ball, health be damned!

Evil Ted said...
Yams - I suspect there may be certain classic basketball footage in the youtube computers that sends off red flags. Who knows? But we shant allow Birdmas to be ruined - the season's not about that.

And thanks for compiling all of Bird's movie cameos. It was much appreciated. Nothing else like that existed previously. (It appears Blue Chips, Space Jam, and Celtic Pride are NOT in the youtube "restricted video" computers, as your Birdmas item was still up last I checked - I imagine the creators of those films are fine with just about any promotion they can get).
12/08/2008 10:06 AM

Wild Yams said...
ET, rest assured, YouTube doesn't have any computers that can assess the footage being uploaded and flag it for copyright violations. Instead they just let you upload anything you want and they leave it up to people viewing the videos to flag the videos as either being inappropriate (like porn or something) or for being copyright violations. If no one ever flags the videos, then they'll stay up indefinitely. Someone could flag my Birdmas video and get it taken down immediately (though that would be pretty crappy to do). If you want to test this out for yourself, create a new YouTube account and re-upload your original Birdmas video and call it something obscure and don't use any real keywords (so that nobody would be able to find it), and you'll see that it will stay up basically forever.

That's why I think it was probably just some Laker fan with no sense of humor who brought it to YouTube's attention so they'd take it down. If this is true, and some Laker fan who comes to this site did this, then shame on you. The guys who work on this site do it for free and do a great job providing all of us with a lot of great entertainment. Get a sense of humor about the anti-Laker ribbing that goes on around here or grow a thicker skin, and don't try to ruin the work these guys put in here.
12/08/2008 10:45 AM

Anonymous said...
Good lord, I have an erection!

One brilliant spoof is nice, but the grinch as well? Freakin awesome!

Anonymous said...
I agree, I think it some person/people flagging the video. Youtube themselves don't care too much until someone complains. There's so many NBA videos on there already which are just snips of game broadcasts, while yours was an original creation.

BTW I think those images are copyright infringing. The site will soon be taken down ;)

AnacondaHL said...
Screw them. Your video is clearly fair use. "Substantial" use is key.

Evil Ted said...
Yams - I never looked into how Youtube works its copyright infringement. I think I assumed they had computers doing some of the work when I noticed that the hilarious Justin Timberlake-background-dancing-for-Beyonce-on-SNL video had been removed so completely (maybe NBC had people on the case)... but one video stayed up a little longer because the creator had flipped the image (reversed it horizontally).

Regardless, I will not allow anyone to foil the greatness of Birdmas, rest assured.

Wormboy - Expect future wonderous Birdmas presentations. Alas, I have less than a year now to prepare them.

Arlen -
I don't know why people are so amazed by rhyming,
It doesn't take footwork or strength or much timing,
It requires only the will to take a good word,
And make it sound like the word you just heard.
As for the volume of words, I rarely grow tired,
When it comes to my Larry, I am always inspired.
12/08/2008 1:08 PM

Anonymous said...
Evil Ted -
Tell that to Lenny Kravitz
His songs bite like.. rabid rabbits?
"I wish I could fly
so very high
up to the sky"
I'm sure there's other examples
of pop idols with rhyming skills up to their ankles
But honestly
I do not see
the point of me
pointlessly sufforing
by thinking up more examples of crap
12/08/2008 5:51 PM

lordhenry said...
Actually, what happened is very simple. Sith Lord Mamba was perusing youtube to make sure his various ridiculous commercials were still up. You know, the one where he force-jumps over the pool of snakes and the other where he does the same to an aston-martin. Imagine the dark lord's horror when he found the youtube video full of horrid celtics content. Nothing in his arsenal of force powers could destroy this video, until like a voice from God, he heard the words in his head, "shall not be rebroadcasted or reproduced without the express written consent of the NBA." Lord Mamba had found his answer. Now if only he could do the same to that stupid video of Sith-heel O'neal mocking him. "You will see how MY a$$ tastes in June, Sith-heel, " Lord Mamba thinks.......
12/08/2008 9:41 PM

Evil Ted said...
Arlen - I guess there IS some talent involved in rhyming...clearly you don't have it. But that's what I'm here for.

Drehog - AWESOME! Glad to hear your team can find inspiration from Birdmas.