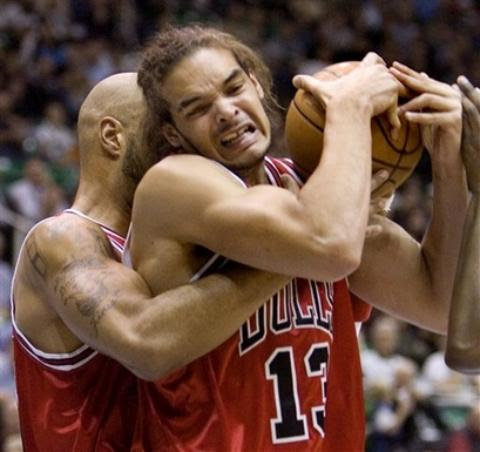 This is what happens when you don't yell "SAME!"
The Philadelphia 76ers: If the Sixers are going to challenge Boston in the East this season, they need to be able to beat the Bobcats on the road. Last night, they did not, falling 93-84 in Charlotte. Mind you, the 'Cats entered the game shooting 43.0 percent as a team (26th in the league) and scoring only 86.7 PPG (last in the league). Yet, against Philly, they shot 55 percent (and 57 from downtown). They also assisted on 21 of their 34 field goals. The biggest problem was that the Deep-Sixers -- who shot 39 percent themselves -- had no answer for the dynamic duo of D.J. Augustin (25 points, 8-for-11, career-high 11 assists) and Raymond Felton (23 points, 8-for-11, 7 rebounds, 5 assists).

Elton Brand, who shot 6-for-13 and fouled out with under a minute left, said: "They outhustled us on a few loose balls and they knocked down timely shots. We expected to be better than that." We all did, Elton. We all did.

The Orlando Magic's free throw shooting: Admittedly, I didn't watch the Bucks-Magic game, but I will always find a 54-21 advantage in free throw attempts for the home team a little eyebrow-raising. But whatever. Here's the crazy part: The Magic missed 16 foul shots...which they had almost as many misses as the Bucks had attempts. Dwight Howard, of course, had 10 of the gonks (out of 20 attempts). Said Stan Van Gundy: "It's every game, so I do worry about that."

He's right to worry. Howard currently leads the league in FTA (11.6 per game), but he's hitting only 54 percent of them. He's missed 74 free throws (out of 162 attempts) in 14 games. Several teams don't have a single player who has attempted as many 'throws as Dwight has missed. Currently, there are only eight players in the Eastern Conference who have been awarded more than 74 tries: Ben Gordon, Chris Bosh, Devin Harris, Dwyane Wade, LeBron James, Paul Pierce, Richard Jefferson and Vince Carter. And there are only 21 players in the entire league who have more than 74 attempts. That's not just a Kryptonite rock to the Magic. That's a Kryptonite nuke. It's not a matter of "if" it'll cost them games. It's a matter of "when" and "how many."

J.J. Redick, quote machine: "I'm starting to feel more comfortable. I missed some shots [against Houston]. ... If my shot starts going in, I'm going to go from playing solid to playing great." Oh yes. Oh yes he most certainly did. I really think J.J. needs to check his game log or else explain how shooting 27 percent on the season is "solid." (Thanks to the anonymous tipster for the head's up.)

Mark Blount: Despite the fact that the Heat were getting dismantled by Dr. Yao last night (28 points, 9-for-15, 12 rebounds, 4 assists), Heat coach Erik Spoelstra stuck with Udonis Haslem on defense. Haslem, for the record, is almost a full foot shorter. Meanwhile, Blount -- the only seven-footer on Miami's roster -- didn't even get off the bench. You know you really suck when...

Michael Beasley, quote machine: The Beasemeister -- who's still listed as 6-10 even though we all know he's not -- said: "We did all right, but Yao's Yao. He's 8 feet tall. Ain't much we can do." Things we've learned so far this season: LeBron's LeBron and Yao's Yao. Glad that's all cleared up.

Yao Watch: Okay. I guess we have to officially call off the Yao Watch. After having his shot stuffed 17 times in Houston's first nine games, Yao has only been stuffed once in his last five games. And dude has been on fire since the Watch started: 21.6 PPG (on 64 percent shooting) and a shade under 10 RPG. And the Rockets won all of those games. (They lost the game he missed against Dallas.) So, Houston fans, feel free to thank me for lighting a fire under your big man.

Dwyane Wade: Despite Yao's big game, the Heat could have won if Wade had played like Wade. Pookie scored 23 points, but it took him 23 shots to get there. He also missed five of six three-pointers and committed 5 turnovers. Said Ron Artest: "He played really bad tonight. He didn't play like I'm used to seeing him play." True dat.

The Memphis Grizzlies: The scary bears lost for the seventh time in their last eight games and dropped to 4-10 overall thanks to 39 percent shooting. Much of that was attributable to Rudy Gay (6-for-19, 1-for-7 from distance). Way to waste a surprise double-double from Darko Milicic, Rudy. Speaking of which...

Tim Duncan: The Griz started Darko Milicic on Duncan...and it worked. Darko's lumbering defense helped harass TD into 6-for-18 shooting. I guess we can officially label Darko "The Duncan Stopper."

The Utah Jazz: As if all the injuries (Williams, Boozer, Korver, Harpring) weren't bad enough, the Jazz suffered their first home loss since last March on a last-second jumper from Larry Hughes. The worst part: It was a junk shot off a long rebound.


Of the win, Junokasm said: "Derrick Rose had another solid night (10-18, 25 points, 9 assists), but if he ever puts me through a Larry Hughes 20-footer to win again, I may throw up." No kidding. I'm sure plenty of Jazz fans tossed their cookies after that shot.

C.J. Miles: I know he tried to get there. But still...dotted.

Luol Deng: He's back! Bad groin and all. But he could have stayed away. The final line: 2 points, 1-for-5, 1 rebound, 1 assist, 3 turnovers, a steal and 2 fouls. Chicago fans continue to rejoice that John Paxson didn't at least take a shot at that Kobe-for-Loul and friends trade last season. And by "rejoice" I mean "pray that Paxson develops a terrible rash on his genitals."

EnergySolutions Arena: For some reason, the shot clocks on top of the baskets weren't working, so temporary clocks were put on the floor in the second half. How does that happen? As important as those clocks are, you'd think they'd, you know, test them before the games and stuff.

Greg Oden: Basketbawful reader Sassman was quick to provide a statistical comparison between Oden and our boy the Vanilla Godzilla: "Starter Greg Oden: +/- of -22 in 19 min with 4 TOs. Back-up Vanilla Gorilla: +/- of +23 in 28 minutes to go with a double-double, 2 blocks, 2 steals, 5-6 shooting, and only 1 TO." AK Dave went so far as to suggested that Greg is the new Joel Pryzbilla: "Looks like Greg Oden finally took over the starting spot from Joel Pryzbilla. He took over Joel's production as well: 3 points, 6 boards, zero blocks, 4 turnovers and a -22 +/- rating. Whoah. Meanwhile, the Vanilla Godzilla scored 10, pulled down 12 boards, blocked 2 shots, had a +23 rating, and said very mean things about Beno Udrih's mother, causing him to turn the ball over 6 times. I guess Oden hasn't 'arrived' yet." Tough crowd, tough crowd. Look, while I agree that Oden isn't burning up the nets just yet, I'm just happy he's playing. Every time he jumps or pivots without shattering something inside his prematurely aging body, that's a victory.

NBA.com: From Basketbawful reader Alexis: "Here you can see the box score from tonight's Blazers game versus the Kings. I attempted to highlight where NBA.com noted with an X a missed shot, taken out of bounds, with 0.00.1 seconds left on the clock at the end of the second quarter. I'm not sure who can claim ownership of this fail, whether it would be Steve Blake for taking a shot from out of bounds, or NBA.com for noting this as a 'missed shot.' While I can't claim to know what exactly the point of considering this a shot attempt would be, or whether Blake truly was going for a ninety four footer, I do know there is a fail somewhere in this image." 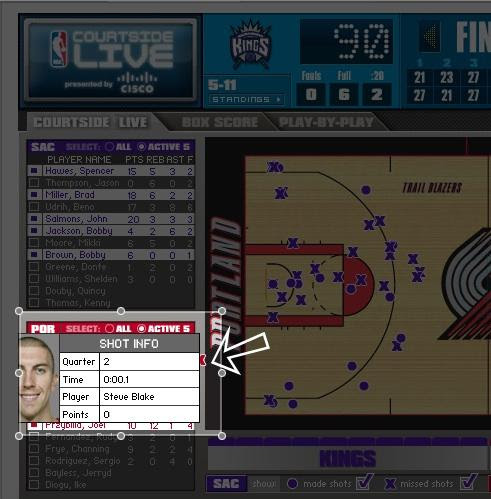 I'm sure this was just a mistake. Unless, of course, Steve was channeling the spirit of Antoine Walker.

The Los Angeles Clippers: Well, let's see: 38 percent shooting, a double-digit home loss, a 2-10 record, and a trade that's being held up by a player physical. Yep. They are who we thought they were.

Mike Dunleavy, quote machine: You'd think Dunleavy Sr. would be a little skittish after Eddie Jordan got the ax, but he sounded downright pleasant after his team's 10th loss in 12 games. "I thought there were a lot of good things in the game for us. We had some good ball movement and our energy was really strong through stretches of the game." Way to accentuate the positive there, Mike. By the way, Dunleavy is now the third most-tenured head coach in the NBA behind Utah's Jerry Sloan and San Antonio's Gregg Popovich. Notice how one of these things is not like the others...?

Kobe Bryant: He borrowed Sasha Vujacic's favorite pen but didn't return it. And it was a clicky-top. Sasha loved that pen.

The American legal system (again): A 12-year-old boy was arrested for farting in class. I am being deadly serious. According to The Smoking Gun, police were called when the boy became disruptive, shutting off the computers of classmates and "deliberately passing gas" at his school in Florida. I'm sure the people of Florida are pleased as punch that their tax dollars are being used to wage a war against middle school flatulence.

I once embarked on a research project to try answering the question of whether NBA scorekeepers count desperation heaves as shot attempts. I failed. The NCAA does have some guidance:

"(c) A FGA is not charged if a shot is taken near the expiration of time for a period or for the shot clock, is not made, and it is the statistician’s opinion that the shot was a desperation shot and not a reasonable attempt to
make a field goal. One or more of the following factors should exist in order to classify a shot as a desperation shot. The shooter:

(2) Uses an abnormal shooting motion, such as an overhand baseball toss.

(3) Rushes or hurries the shot to beat the expiration of time. A shot could be considered rushed or hurried if the shooter tries to control and shoot the ball in the same motion with not enough time to get into a normal shooting position (squared up to the basket)."
11/25/2008 4:22 PM

Anonymous said...
Is it even legal for JJ to say those things after the way he plays? I feel sorry for the people who bought those better basketball dvds.
11/25/2008 4:28 PM

Casey Holdahl said...
The NBA does count desperation shots at the buzzer as attempts. In fact, that's the only reason why Joel Przybilla was 5-for-6 last night instead of 5-for-5. That was the first "shot" he had missed in something like 4 games.

The fact that it's counted as a shot is the reason why many players won't throw the heave until after the buzzer. They don't want to mess with their FG%
11/25/2008 6:26 PM

RJ said...
Since we've got all these extra D's around, courtesy of the enver Nuggets and various others, I think it may be time to refer to Crazy Pills as Ron D'Artest after nights like last night. Granted he wasn't the one on Wade the whole time, but it's hard to discount his effort. And "D'Artest" is a pretty awesome last name.
11/25/2008 7:28 PM

Darth Weasel said...
the awesome Blake miss was from inside the free throw line at his own end and missed the basket wide right by about 8'.

And Joel, besides being the Vanilla Gorilla and the Thrilla, now has a new name which should be used as much as possible: Joelzilla, courtesy of some random fan and their sign in the Kings game.

Personally, I like the Thrilla, and everytime he dunks or blocks a shot, myself and a few geniuses around me do the "Thriller" dance. Another great trend that needs to come to every NBA arena this year
11/26/2008 10:23 AM