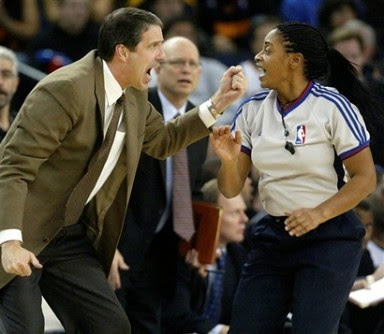 "That was a wonderful call! You're doing a
great job! Can I buy you dinner after the game?!"
Jason Richardson and Gerald Wallace: The Bobcats' duo combined to shoot 10-for-28 and commit 8 turnovers. You're not going to beat the Spurs when your big guns are shooting you in the foot.

Dallas Mavericks offense: The Mavs' Jekyll and Hyde season continued last night against the Wizards. Dallas shot 41 percent and had more turnovers (16) than assists (15). For those of you keeping track at home, this is the first time the Wiz have swept their season series with the Mavericks since 1996-97. In all fairness to Dallas, though, the Wizards have been going at it on the defensive end like Scooby-Doo going after a Scooby Snack.

Jason Terry: His line against Washington: 4 points (2-for-7), 1 rebound, 1 assist, 3 fouls, 27 minutes. You know, I think Terry would be a better player if Avery Johnson only played him the last two minutes of every quarter.

Boston Celtics' mouths: The Celtics travelled to New York for a basketball game and a debate broke out. The Boston players couldn't keep their traps shut, and that diarhea of the mouth got Paul Pierce ejected and earned Kendrick Perkins a technical. If the Celtics really want to contend for a title, they can't let crappy teams like the Knicks drag them down into the gutter.

Philadelphia 76ers foul shooting: The Sixers missed 13 freethrows. Those are a lot of misses, especially in a seven-point loss. Who's their freethrow coach? Chris Dudley?

Gordon Giricek: He scored a two trillion against the Pacers. And just to rub a little salt into that wound, let's not forget the Jazz are 8-2 since launching Giricek out of Utah.

Jermaine O'Neal: A potentially season-ending injury? No way! But he's usually so durable...

Luis Scola's shooting eye: His 2-for-11 night against the Spurs was bad, but his 0-for-6 performance against the Sonics was worse. Don't get me wrong; Scola's doing a lot of other little things to help the Rockets win. But I'm guessing Rick Adelman would like his big man to shoot better than zero percent.

Quinton Ross: The Clippers' starting 2-guard was 0-for-3 against the Jazz. It was Ross' sixth consecutive scoreless game. He's gone 0-for-13 during that stretch. Look, I know the Clippers are bad, but why is this guy still starting? Oh, yeah, because Mike Dunleavy's looking down the bench at Brevin Knight. Never mind.

Andre Kirilenko: The Russian Rifle was uncocked by foul trouble. He scored zero points in the nine minutes he managed to stay on the floor. Jerry Sloan might be playing nice, but when you sit one of your starters for the last quarter and a half of the game, you're sending a message. Probably something along the lines of "Stop sucking."

Golden State Warriors: I've always said that their style of play -- chaotic, undisciplined offense meets non-existent defense -- means that they can beat anybody and also lose to anybody. But a home loss to the Minnesota Timberwolves, who had lost 16 straight road games? Not only did they let the lowly Wolves score 109 points and shoot over 50 percent, they pulled up some comfy seats and munched on popcorn while they watched Ryan Gomes score a career-high 35 points. And Marco Jaric almost had a triple double (16 points, 8 rebounds, 10 assists)! Said Don Nelson: "We laid an egg tonight. What can I tell you?"

Chicago Bulls: Another poor shooting night (36 percent) was masked by another lackluster defensive effort (the Grizzlies shot 52 percent). And all those good feelings generated by their win over the Pistons gets blown the hell away thanks to another loss to a 12-29 team. It's gotten to the point where I can't watch the Bulls play without grinding my teeth. Someday soon my mouth is going to explode. People will die in the blast. Mark my words. Anyway, the Bulls are now 2-4 since their team-unifying player suspension of Joakim Noah.

Detroit Pistons bench: Remember all that talk about the Pistons' improved bench? Forget it. Last night, outside of Jason Maxiell, there was no Pistons' bench.

Miami Heat: That's 14 in a row, despite Dwyane Wade's 42 points. And it looks like The Big Grandpa re-injured his aching hip. The Heat's next four games are against the Spurs, Pacers, Celtics, and Magic. In other words, they really need to beat the Pacers to avoid surpassing their all-time longest losing streak. And, strangely enough, if there's a team that can sink to the occasion faster than this Heat team, it's the Pacers. I can't wait!

Denver Nuggets defense: Get a hand in the face of the shooter. It's Basketball 101. But the Nuggets failed to remember that as the Lakers rained fire on them during a 39-point first quarter. Denver's D picked up after that, but the tone was set, and once Carmelo Anthony went down, the Nuggets were pretty much finished.

[Update] Mario West: As some exceedingly astute readers have pointed out, Mario West played a grand total of 18 seconds against the Trailblazers, contributing a single personal foul (and a +/- score of -3) before getting a quick hook. As TrueHoop put it: "Atlanta's Mario West just checked into the game to guard Brandon Roy for the last few seconds of the half. He was whistled for a foul before the ball was even inbounded. Then he was taken out of the game. That's zero playing time, and one foul. Has to be some kind of historical footnote." Hmm. I didn't see the game, but that 18 seconds had to come from somewhere. Maybe he got some time in the second half?

Anonymous said...
"team-unifying" aka Ben Wallace is a huge douche who can dish it to rookies, yet feels comfortable in making 60 million dollars to play like Bill Wennington...actually that gives him too much credit, Wenny could actually hit a jumpshot. Fuck, this season is so painful, just make the panic trade for Gasol, please.
1/22/2008 10:11 AM

Anonymous said...
I was hoping you wouldn't miss this

but check out the portland scorebored

Anonymous said...
Atlanta's Mario West just checked into the game to guard Brandon Roy for the last few seconds of the half. He was whistled for a foul before the ball was even inbounded. Then he was taken out of the game. That's zero playing time, and one foul. Has to be some kind of historical footnote. - from Truehoop
1/22/2008 10:36 AM

Anonymous said...
haha, the comment under the picture made me laugh =)

Tonewise said...
Kobe Bryant reads ur blog, sent it to kwame and then last night happened.

Basketbawful said...
anonymous -- Dude, I am right there with you. I usually hate panic trades, but in this case, it's just time for a major shakeup. Not only for the fans, but for the players, because they know the team is going nowhere as presently constructed.

shrugz -- I didn't want to mention that because Henry had already brought it up. But in the end, how could I ignore such crap? The post has been updated.

phlo -- I'm glad you appreciated the caption. Originally, it was going to read, "What do you tell a woman with two black eyes? Nothing you didn't tell her twice already." But then I remembered that even I have standards of decency. Most of the time.

tonewise -- Brown came back strong, so kudos to him for staying mentally strong, which hasn't always been the case with him. Kobe played great. I was texting back and forth with a buddy of mine who has Lakers season tickets. I actually called Kobe "Magic Bryant" because he was actually dominating the game by involving his teammates. That's always been his potential, and what I would expect from him, or any great player for that matter. He's never really gotten it before, even when the Lakers were winning titles a few years back. Even though I enjoy hating him and would miss mocking his selfishness, I think that it would be great if he kept it up...not only for the Lakers, but for the sport.
1/22/2008 11:20 AM

Anonymous said...
As a mavs fan, for this particular season, there's not much I like to see more than the Warriors losing. To the timberwolves. At home. Still, I have to hope for a mediocre season for the Warriors - I want them to be in the playoffs. Best case scenario this year would be a first round playoff rematch. It just wouldn't light the fire and inspire the same confidence needed for a title if we beat Denver or New Orleans.
1/22/2008 1:52 PM

Anonymous said...
The Pistons are exactly where they were last season. This time McDyess is playing the part of Chris Webber and Maxiell is the new McDyess. Hayes is Delfino, appearing in every game but beyond that, not doing much. Which brings up something that's been pissing me off. Walter Hermmann's lack of playing time this season has been baffling to me. He had an amazing scoring run to end last season with the Bobcats, boosting his season scoring average to almost ten a game (he started this season on the bench). He provides tenacious defense (i.e. the Dallas game where he kept a red-hot Nowitzki scoreless for the quarter he was guarding him) and has probably a comparable shooting touch to Hayes, if not better. To me, he could possibly offer much more than Hayes, but he's not getting playing time.
1/22/2008 4:45 PM

Shrugz said...
of course you must post that LOL