The Stern Button (thuh sturn but'-n) noun. A device that is used to instruct NBA officials -- possibly via small bursts of electric shock -- when to make a call and when to swallow the whistle. This device is typically used in crucial playoff games to extend an exciting series or ensure that big market teams advance.

Usage example: When a mysterious call is made during an important playoff game, you've probably just witnessed the Stern Button in action.

Word History: The Basketbawful gang invented this word while watching Game 6 of the 2002 Western Conference Finals (see below). Some of the calls in that game were so unbelievably bad, we theorized that David Stern -- who was sitting in the crowd -- was using one of those gameshow hand buzzers to force the officials to favor the Lakers. Ever since then, all subsequent examples of dubious officiating have been blamed on the Stern Button.

We like to imagine that, when Stern uses the button, he looks just like Emperor Palpatine did in Star Wars: Episode III when he told his clone troops to execute Order 66. So next time you realize the fix is in, turn to a buddy, pantomime thumbing the Stern Button, and recite the line in a croaky voice. This is even more effective if you replace the number 66 with the number of the corresponding NBA player. For example, assume that you're watching a Bulls playoff game from the mid-90s on ESPN Classic and Jordan is getting preferential treatment from the officials. In this case, you would pretend to depress a button and say, "The time has come. Execute Order 23." Maybe I'm just easily amused, but I never get tired of doing this. 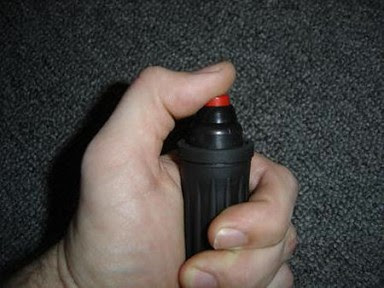 An artist's rendering of the Stern Button.
UPDATED: The Top 6 Stern Buttom Moments

1. Game 6 of the 1988 NBA Finals. The stakes: The Lakers were trying to become the first NBA champion to repeat since Bill Russell's Celtics did it in 1969. However, the Pistons were leading the series 3-2 and, thanks largely to Isiah Thomas' 25 third quarter points, they were ahead 102-101 with 14 seconds left. However, Bill Laimbeer got whistled for a cheap bump foul on a Kareem Abdul-Jabbar skyhook. Kareem, channelling his inner Rick Barry, hit both freethrows to give the Lakers the victory. L.A. went on to win the title, and get their repeat, in Game 7.

2. Game 6 of the 1991 Eastern Conference Semifinals. The stakes: A Pistons/Bulls matchup in the Eastern Conference Finals. The Pistons won back-to-back titles in 1989 and 1990, tormenting Michael Jordan along the way, and 1991 was supposed to be Jordan's payback year. However, the Pistons had to get past the Boston Celtics first. The C's were leading by two points in the final minute of regulation, and it looked like they were going to take the series back to Boston Garden for a deciding Game 7 when Kevin McHale cleanly blocked a Joe Dumars layup. However, Referee Jack Madden inexplicably whistled McHale for goaltending. That call tied the game, and the Pistons would go on to win it in overtime, "earning" the chance to get swept by the Bulls, who were en route to their first appearance in the NBA Finals.

3. Game 7 of the 1993 Western Conference Finals. The stakes: An NBA Finals showdown between the two best teams (Bulls and Suns) and the two best players (Michael Jordan and Charles Barkley) in the league. Clearly the Seattle Supersonics had no chance, especially since the Suns were gifted with an NBA playoff record 64 freethrow attempts.

4. Game 6 of the 1998 NBA Finals. A (second) fairytale ending for Michael Jordan's career. The whole series was kind of a sham, actually. Karl Malone was the reigning MVP, but the officials were allowing Dennis Rodman to hold him, trip him, armlock him, and, in a couple cases, out-and-out wrestle him to the ground. Despite the egregious amount of hand-to-hand combat being leveled against the Mailman, he averaged only six freethrow attempts per game (as opposed to 10.5 during the regular season). Just go back and watch those games, then try to tell me he only deserved three trips to the line per game. Jordan, on the other hand, who averaged eight FTAs during the regular season, got 12 FTAs per game during the Finals. But the worst of the worst happened in Game 6. First, the officials allowed a Ron Harper three-pointer at the end of the second quarter despite the fact that replays showed it came after the buzzer. They then disallowed a Howard Eisley three at the end of the third that replays showed clearly came before the buzzer. That's a six-point swing in a game that was decided by a single point after Jordan pushed off on Bryon Russell to hit the game-winner.

5. Game 6 of the 2002 Western Conference Finals: The stakes: A ratings-busting Game 7, another trip to the NBA Finals for the media darling Lakers, and the potential for the first threepeat since Jordan's second retirement. Despite it all, the Sacramento Kings were on the verge of knocking off Shaq and the Lakers, until the officiating went haywire. The Lakers players were given a five-foot cushion by the refs, who granted the Blue and Gold 27 freethrows in the fourth quarter. At one point, Mike Bibby actually leaped out of Kobe Bryant's way and still got whistled for a foul. The Lakers went on to win 106-102.

6. Games 3, 5, and 6 of the 2006 NBA Finals: The Stakes: An NBA championship for fan favorites Dwyane Wade and Shaq. Wade was awarded 18, 25, and 21 freethrow attempts in three crucial victories for the Miami Heat. In those three games, the Heat defeated the Dallas Mavericks by margins of two points, one point, and three points. It's pretty clear that Wade's 64 FT attempts in those games were kind of important.

Anonymous said...
Oh my god, I can't believe someone else shares the same opinion as me with the bad officiating in Game 6 of the 1988 NBA Finals. Honestly? Detroit deserved to win that so much. I don't care that they won in 1989, the 1988 series was SUPPOSED to be their first championship. It should've. I mean, remember that game where Laimbeer drilled the three with a few seconds to go, and Isiah stole the ball from Magic and drilled a three to end the half? They worked so hard in that series only to get screwed over. Plus, Adrian Dantley got fucked over in January of 1989, robbing himself the chance of winning a championship, and a hall of fame spot.

Anonymous said...
my favorite part of this is that it makes David Stern look like a hokey B-movie villain. As in waiting for Adam West (with Mark Cuban filling in as a grotesque Robin) to show up and do the Batdance before unloading some merciless "KA-POWs" on glowering NBA security henchmen, all whilst Stern twirls his handlebar mustache and laughs maniacally as he repeatedly shocks Bennett Salvatore* into whistling DeSagana Diop for getting within 10 feet of Wade. The image is especially hilarious b/c you know there's no way Stern would be caught dead with such a crude tool of manipulation; the whole "creased envelope" theory from the 1985 Draft makes me laugh for the same reason. He's far too slick for something so clumsy-seriously, he's like the Superfly of sardonic Jewish lawyers. If anything, I imagine him devising some kind of gratuitously intricate scheme.

I remember literally jumping up and hollering in disbelief at that Bibby anti-foul. Good times.

*to be honest, Bennett Salvatore is so freaking terrible that I don't think a Stern Button would make any difference in his case
7/30/2007 11:25 AM

Basketbawful said...
josh -- The Pistons probably should have won the '88 Finals, and would have...if the refs had had any balls. Of course, then we might be living in a world where that Pistons team won three straight titles. So maybe things worked out after all.

padraig -- You're right of course. I'm sure Stern has something much more subtle in place. Possibly voodoo, or hypnotism, or chips implanted into the officials' medulla oblongata.

Anonymous said...
How about Bavetta waving away Eisley's three at the end of the first half in game 6 of the '98 finals?

Anonymous said...
Well i guess u have to explain all those situations that, according to your reasoning, should have been extendind with crookes officiating but they didn't.

For example, if Stenr had any control on this, do you think there is ANY chance he wouldn't extend MJ's first final vs Magic o at least 6 games?

Or do you think that if it was already decided to hand the title to the lakers in 1988, they would have left it up to Jabar's FT seconds before the end?

It's a whole different thing when bad referees are -subcinsciously- influenced by star players or home teams, and another thing to actually believe that it was designed like this.

Shit happens, mistakes are mistakes. Especially in playoff time when no one would dare decide who should take the title.
7/30/2007 9:52 PM

Anonymous said...
I agree with anonymous above.
Eisley's 3 that was waived off but clearly good.
Ron Harper's 3 that was way late... but counted (I don't know if it was the same game).
And then MJ's push on Russell...

Anonymous said...
The 2006 Finals and the two big calls in the 1998 Finals were the hardest for me to swallow. As a Mavs fan and as John Stockton (minus the dirty defending) was my idol, those leave me bitter about the NBA. I was almost thinking about converting to baseball at the end of both this season and last season, but both times my casual baseball team the Astros were struggling, so I decided to stick with 'em both.
7/31/2007 12:35 AM

Anonymous said...
The refs are under a lot of pressure and all these calls might be accidents because there are only a few series that were allegedly decided by refs out of hundreds. that said, i think everyone of these series were fixed and more. point shaving often occurs in basketball -- mostly college though-- and i don't see why deciding full games was never cheated upon. i was reading in the NY Post about a series i think in the sixties or seventies that was decided by refs. This is why i stopped following the NBA. My new favorite sport is the WNBA. I am almost positive there are no bogus fouls in it.
6/15/2008 12:46 PM

Anonymous said...
you follow the WNBA? I sure hope you don't call yourself a man.

The Real Deal said...
Once again the Lakers are on the the list again.

Here's the newest one.

2010 NBA Finals Game 7. For much of the game the teams were playing it out with good defense and intense basketball. When it became the 4th quarter that all changed. Overall, LA shot 37 free throws to Boston's 17. Even worse LA shot more free throws in the 4th (I think it was 18?) than Boston shot the whole game (17). LA puts up 30 in the 4th and we all get to "marvel" at Kobe "winning" his 5th ring.