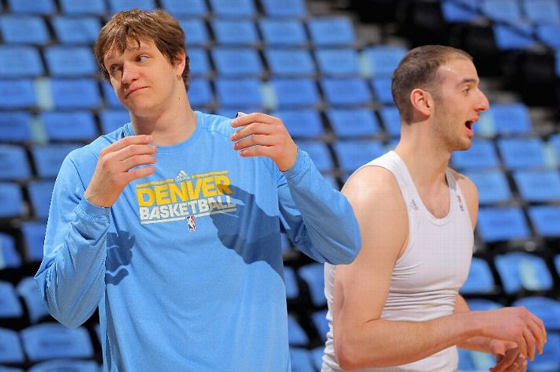 The Boston Celtics: For a half, the Celtics looked like they just might steal Game 2 in New York. They shot 50 percent (8-for-16) in the first quarter and 61 percent (11-for-18) in the second. And during that second quarter, they limited the Knicks to 4-for-17 shooting and led by as many as nine points (48-39). It honest-to-goodness looked like coach Doc Rivers had made all the defensive and offensive adjustments necessary for his team to win.

Then the second half happened.

The Celtics seemingly forgot everything they'd ever learned about running an offense. Seriously, I haven't seen somebody have that much trouble scoring since my freshman year in college. In the third quarter, Boston went 4-for-18 from the field (including 0-for-3 from beyond the arc) and got outscored 32-11. The Celtics did manage to limit the Knicks to 13 points on 6-for-22 shooting in the fourth quarter...but they scored only 12 points on 3-for-18 shooting themselves.

So for those of you who enjoy simple math, Boston scored only 23 points on 7-for-36 shooting over the final two quarters. That's bad even by this site's standards.

Said Rivers: "I thought we attacked them in the first half, but they hung in there. They didn't let us throw a knockout punch and I thought in the second half they turned that on us and they threw a knockout punch. Several."

According to ESPN Stats and Information, Boston's 19.4 percent second-half shooting was their worst shooting percentage in any postseason half since 1996-97. Which is weird since the Celtics didn't even make the playoffs that season. Or the season before. Or the season after. I'm guessing they were referring to the first half of Boston's 124-77 loss to the Orlando Magic in 1995...when the Green Machine rolled out a starting lineup of Dee Brown, Sherman Douglas, Eric Montross, Derek Strong and an over-the-hill Dominique Wilkins. Still, the point is, the Celtics had a historically bawful shooting half last night.

ESPN Stats and Information went on to note that Boston scored only 24 points in the paint, which is tied for their lowest in-the-paint output this season and a full 14 points below their season average for points in the paint. That's largely because the Knicks were both playing aggressive halfcourt defense and getting the benefit of some home cookin'. For example, there was one sequence that happened with about five minutes to go in the third when Paul Pierce got mugged at the rim with no call -- he even had his headband knocked off during the play -- followed by J.R. Smith earning two foul shots off a minor bump by Jeff Green.

It was just that kind of night. I'm not going to even run through the play-by-play. The bottom line is that, during the second half, the Celtics were roughed up in the paint and intimidated into taking a lot of contested long-range jump shots. Pierce looked frustrated most of the night. Kevin Garnett battled foul trouble and looked about twice as frustrated as Pierce. Jeff Green (3-for-11) apparently left his shooting touch back in the first half of Game 1. And Courtney Lee played only four minutes off the bench during a game in which the Celtics desperately needed some scoring, any scoring, from anybody.

Of course, that might be because of Lee's "assist" to Kenyon Martin in Game 1, but still.

Anyway, the Celtics are now a combined 14-for-63 (22 percent) in the second halves of Games 1 and 2. That wouldn't get it done against the Charlotte Bobcats, let alone the Knicks.

That said, KG did make a solid point after the game: "They haven't scored 90 points yet, and when you're playing a team like this, that's a good sign. We just have to figure out the offensive side of the ball, and not be so stagnated. Figure out ways to score more off opportunities, be aggressive, take advantage of mismatches."

Sounds great. Maybe in Game 3 we'll see if they can actually do it.
By the way, even though it happened before things went sour for the Celtics, this disastrous 12-second sequence pretty much defined the game:


The Milwaukee Bucks: Apparently, the fulfillment of Brandon Jennings' "Bucks in 6" prediction won't officially start until Game 3. Hey, Milwaukee could still win four in a row, right? Right? Anyone? Bueller?

Okay, look, we all know how this is going to end. The Bucks are dead men walking. They played reasonably well in Game 2 -- 50 percent shooting, 14 fast break points, 40 points in the paint, 23 points off turnovers -- and still lost by double digits. The Heat were basically sleepwalking for three quarters, then turned it on for about two minutes and won going away.

By the way, that "two minutes" comment wasn't even a joke. Miami reeled off a 12-0 from in exactly two minute to start the fourth quarter to turn a 68-65 lead into an 80-65 laugher. Chris Bosh and Dwyane Wade weren't even in the game...and 10 of those 12 points were scored by Chris Andersen and Norris Cole.

Naturally, though, Miami's three quarters worth of relative apathy and indifference has actually given the Bucks hope. I'm not kidding.

Said Larry Sanders: "It's a series. We made progress this game."

Added Milwaukee coach Jim Boylan: "We felt pretty good about the position we were in, giving ourselves an opportunity on the road with 12 minutes to go. You feel good about that."

And then there was Jennings: "We showed a lot of improvement tonight. Aside of making that run in the fourth, I think we should have won this game."

Aside from that run...and Jennings' misguided shooting. Nostradamus Jr. scored only 8 points on 3-for-15 shooting and missed all seven of his three-point attempts. And the Bucks were outscored by 15 points when he was on the floor. And Brandon's backcourt mate, Monta Ellis, went 2-for-7, missed all three of his three-pointers, and committed 4 turnovers.

So to sum up, Milwaukee's best two players combined for 15 points on 5-for-22 shooting and 6 turnovers in 75 minutes of playing time. And a composite plus-minus of -20. Oh, and that 15 combined points is about 22 below their season average.

But maybe that's why the Bucks are feeling good about themselves. I mean, if those guys play even a little better, they have a decent chance of beating Miami at home. Right? Anyone? Bueller?

No, not really. The Bucks are condemned men, and we're watching them walk the NBA equivalent of the green mile. But at least Jennings gave us something to make fun of during the sweep. That's about the only thing worth keeping track of in this series.

Well, except this, maybe: According to ESPN Stats and Information, Miami has gone 44-for-57 (77.2 percent) inside five feet so far in this series. That's a full 10 percentage points higher than their FG% within five feet during the regular season...which led the league. So, yeah, give a hearty golf clap to Milwaukee's interior defense.

The Denver Nuggets: This game made me irrationally happy. Why? Because the 2012-13 Denver Nuggets were obviously channeling the collective spirit of the 1990-91 Denver Nuggets. Also known as (around these parts) as The Worst Defensive Team of All Time.

Yes, this game truly harkened back to those halcyon days, when Lawler's Law -- which states the first team to 100 points will win -- was about the best barometer for determining which team would win or lose a particular game. Speaking of which, did you know the 1990-91 Denver Nuggets held opponents below 100 points exactly zero times in 82 games? Or that they had more games in which teams scored between 150-159 points against them (6) than games in which they held a team below 110 points (4)? That team was so bad at defense that they averaged 119.9 points per game and still lost by an average of almost 11 points!

And yet even that group of defenseless misfits must have been shaking their heads in shock and embarrassment at the _efensive _isplay the current Nuggets put on last night.

As Nuggets coach George Karl said: "I don't think I've ever coached a game when a team got three 35-point quarters, maybe in my career. Ever."

Oh it gets better. Or worse if you're a Nuggets fan. According to ESPN Stats and Information, the Warriors shot 64.6 percent for the game, which is the highest FG% in a playoff game since the Utah Jazz shot 65.1 percent in a 129-90 win over the Phoenix Suns in 1991. And Golden State's 131 points were the most in a regulation playoff game since the Celtics scored 131 against the Lakers in Game 6 of the 2008 NBA Finals.

And did I mention the Warriors were 14-for-25 (56 percent). Or that the Nuggets got outrebounded by 10 and bricked 11 free throws? Or that Denver allowed Golden State to score at a rate of 131.2 points per 100 possessions and rebound almost a quarter of their (very few) missed shots?

Said Karl: "We didn't do much of anything very well."

According to ESPN Stats and Information, Curry was 12-for-19 on shots 15 feet or more from the bucket, and 28 of his 30 points were scored from long range. So, uh, Nuggets...anybody got a hand to go with this face?

By the way, as the AP game recap noted, Curry had Golden State's first 30-10 game since Sleepy Floyd obliterated the Lakers with 51 points, 10 assists and 4 steals back in Game 4 of the 1987 Western Conference Semifinals (which Bill Simmons immortalized in writing at The Sleepy Floyd Game).

That's right: This game let me reminisce about both the 1990-91 Denver Nuggets and a classic humiliation of the Lakers. Good times.

Savio said...
Yeah, I smell plenty of bawfulness in game 1 between GS an Denver, they are two strange team. Tehy don't play really well in my opinion, maybe with Gallinari and an healthy Faried... Denver lost a big key player in Gallinari. About the celtics... game 1 made me thought that the celtics can really battle the knicks... maybe i was so wrong... anyway, look clear to me that the Knicks does not stand a chance against the Heat.
4/24/2013 10:36 AM

Wormboy said...
Yeah, the Lakers digs were cracking me up. Especially the Game 6 of the 2008 Finals. I was at a conference, and was walking on air.

Confession time, though: I don't actually loathe the Lakers organization. It's mostly Kobe. If Dwight becomes the face of the Lakers, then my loathing will hit full stride again.
4/24/2013 11:08 AM

Wormboy said...
And one last tidbit: we need to change basketball on TV. We need to get Shaq off "Inside the NBA" and we need to get Simmons off ESPN. Dude is as bad on TV as he is good in writing. A smartass, funny guy becomes a simpering talking head. Ugh!
4/24/2013 11:57 AM

Anonymous said...
Of course Larry Sanders is going to say it's still a series. Do you expect him to say something like "Wow! They're SOOOOOOO much better than us! Do you think Chris Bosh would give me his autograph?"
4/24/2013 2:44 PM

That hurt me just to see the replay.

Anonymous said...
Boston must have felt the Warriors' ridonkulous FG% coming, and decided they needed to toss up the bricks and mortar to balance the world. We wouldn't want a Chaos Dunk now, would we?
4/24/2013 5:43 PM