Every year we honor the best players in the NBA with an exciting, entertaining All-Star game. So naturally it's only appropriate that we honor the worst players in the NBA with a ridiculous, hopelessly goofy Null-Star game! I'm sure Sprite, State Farm, and all the other sponsors that show up in the game footage are quite proud to be associated with it. (I expect a cease-and-desist letter any day now.)

The Eastern Conference Null-Stars earned home court advantage after their unbelievable domination of the Western Conference Null-Stars in last year's game for their second consecutive victory. The game was simulated in NBA 2K12 with five-minute quarters. I intentionally set the game up to be a bit ridiculous, with the player tendencies set to more "all-star game" style (they were encouraged to go in the paint and shoot threes) but also with their success rate and talent level dropped exceptionally low. You will see how this effected the game very obviously...

The rosters for this game were carefully chosen by reviewing the lacktion reports Chris has tracked all season, utilizing the highly advanced metrics of Marios, trillions, suck differentials, and Voskuhls. Here are your 2011-2012 Basketbawful Null-Stars, along with their most noteworthy lacktive contributions of the season! 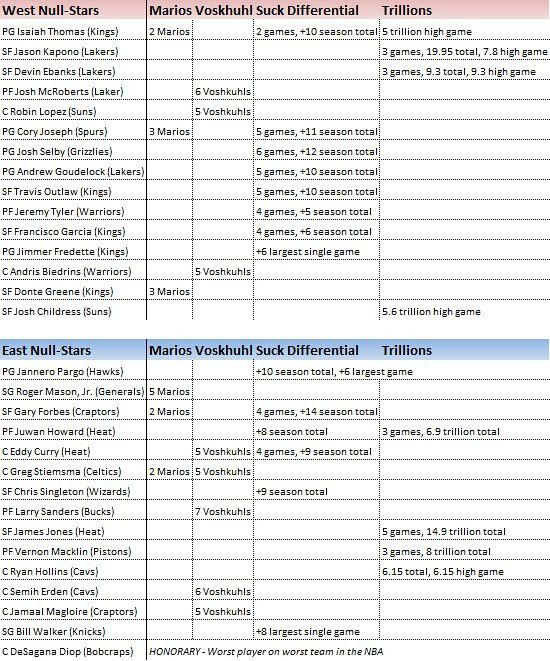 (Biedrins, Greene, Childress, Magloire, Walker, and Diop were all DNP-CDs for this game, but are still worthy of being honored as Null-Stars)

Special recognition for Jason Kapono -- he is our only three time Null-Star! Also let's take a moment to celebrate DeSagana Diop, Semih Erden, and Ryan Hollins for each making their second Null-Star game. It's quite an accomplishment to survive in the league for multiple seasons despite being utterly horrible at basketball.

And now, enjoy BawfulTV's coverage of the game. Here's Kevin Harlan, Steve Kerr, and Clark Kellog with the call, and Doris Burke reporting from the sidelines. While we don't have the blown dunks that have graced previous Null-Star games, I am pretty certain you will agree this is the most bawful edition of the game yet. 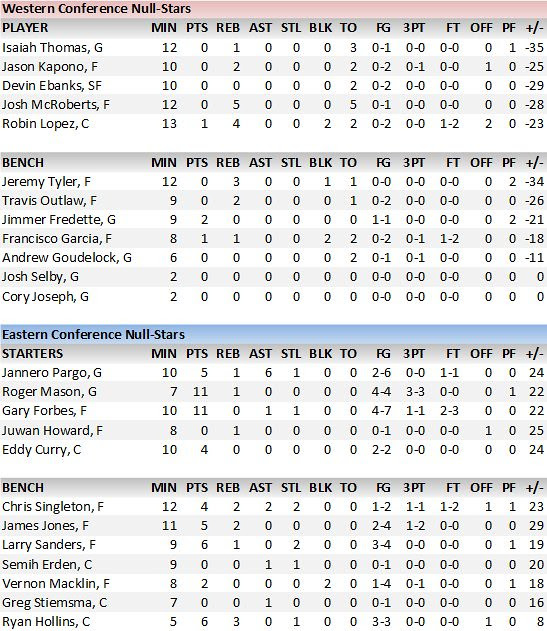 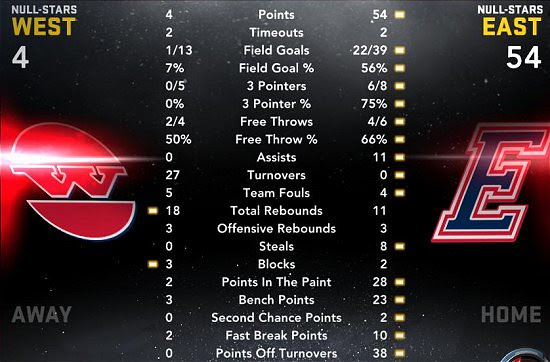 Lacktion report:
For the Western Conference, Devin Ebanks racked up 2 turnovers with no contributory statistics on two shot attempts in his 10 minutes on the floor for a 2:0 Voskuhl and a +4 suck differential. Andrew Goudelock had 2 turnovers and 2 bricks (one from downtown) for a +2 suck differential. Cory Joseph and Josh Selby both cashed in for 2 trillion.

Most Bawful Player:
This is entirely subjective, but the first half performance by Josh McRoberts may be the worst minutes played in professional basketball history. A toddler with vertigo could handle the rock more effectively. But as far as full game performance goes? Isaiah Thomas was a staggering -35 in 12 minutes, with three turnovers and only one rebound.

Noteworthy:
A couple players such as Jimmer Fredette apparently were involved in some sort of disturbing medical experiment prior to the game, and thus have the head and legs of their usual body, but the arms of a man with much darker skin. It's nearly as bawful as the mass decapitation that occurred last season with Von Wafer's near-chaos dunk.

Rik Smits Mullet said...
Ahh man the turnovers on the west team made my day. Everytime a white player was involved the ball hurled in the stands. Especially the jimmer on the point sequence in the 3 th quarter were he lost the ball because he tried to make a cut and it bounced of his legs. And then on the next possesion he just rocketed it in the stance while the dude he wanted to pass to was just standing next to him. Amazing stuff also a special shootout to clarck kellogg for his confidence in a comeback from the west team because of there amazing rebound differencial only trailing 48 points with 2 minutes left. Nice confidence boost. This game made it clear why the cHeat are winning this much with juwan " confidence booster" howard on your bench how can you lose.

Cetti said...
Sorry to interrupt the Null Star Game, but Glen Davis dancing with a fake Turkoglu for Pizza is something, isn't it? I spat coffee

Michael Hsu said...
Everyone like Lebron's anti clutch turnover at the end of the game that sealed it for the West?

Adrià said...
Oh my God that was hard. You bawful writers made me die inside a little. That was more than expected, more than I can handle.
I mean, even a cow has more skills come on. It was so bad the camera killed himself in half the second quarter and I had to wait a couple minutes until they resolved this "technical problem".

On related news, I just saw there are still two Bobcats - Hornets games to be played.

And actually, to get this and other similar things, I just made a Facebook Basketbawful page, to reunite all the Bawful fans I could reach. I uploaded some pictures, but of course, I'm gonna go on with that and I will post links to the blog everywhere, as long as links to the youtube stuff you post here.

I always read you, so it shouldn't be much complicated.

Here's the link, if Dan, Matt or ET want to be administrators, just send a message there, or at adari_diplodokus@hotmail.com

Whoever else that wants to become admin just do the same thing but with something to post there.

awopbopaloobopalopbamboom said...
There's something wrong with that boxscore : Fredette with no turnover after his third quarter collapse ?

Calling only two timeouts when your team has scored 4 points, that's a great accomplishment Coach.

See you for the 2013 Null Star Game, John Salmons.

Anonymous said...
Hahaha love it. By weird coincidence, I had internet radio on in the background and "Silent Sigh" by Badly Drawn Boy was playing - I didn't realise and thought it was your choice of entrance music.
2/28/2012 7:23 AM

Ebb said...
considering how isiah thomas is now becoming a pretty damn good player on the kings (look how he's played in his last several games)...iono how I feel about him being on that null star team...then again I'm also biased because he was the star of my college (GO DAWGS) before being drafted.
2/29/2012 2:18 AM