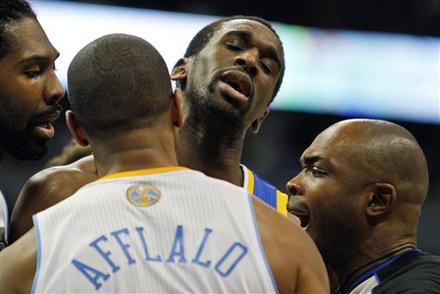 So glad I can't see what is happening below the camera frame... 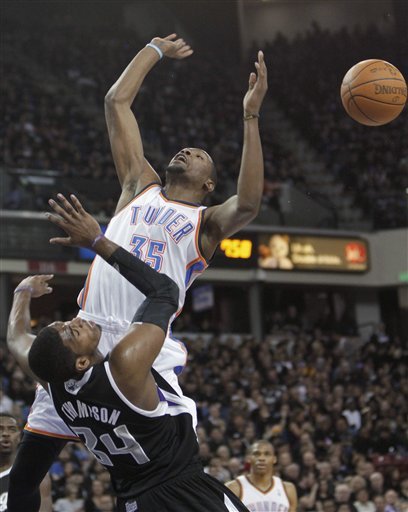 Thompson! Quit trying to mirror what KD does! That's counterproductive when playing defense!!

Thunder at Jazz, ESPN, 10:30pm: The Thunder just lost on national television to Excremento. Excremento!! They are going to be pissed tonight. There may be bloodshed. There may be death and dismemberment.

Hawks at Magic, 7:00pm: That's it. I'm officially out. I do not care if Dwight Howard stays or goes. I'm just tired of reading about him every single time I see a game preview involving the Magic.

Clippers at 76ers, 7:00pm: As noted by STATS LLC: "This matchup marks the finale of what coach Doug Collins termed as 'Death Row,' a seven-game span in which Philadelphia played four of the Eastern Conference's top six teams, two of the West's division leaders and the Los Angeles Lakers." Yikes. It's impressive they've gone 4-2 in that stretch, but they get to play Cleveland and Charlotte next. Those are like the ultimate trap games, right?

Heat at Wizards Generals, 7:00pm: If you're going to be on a six game road trip, I guess this is as good a place to go as any, right?

Celtics at Craptors, 7:00pm: Remember that horrible Lakers/Celtics game last night? Prepare yourself to watch more of the same!

Bulls at Bobcraps, 7:00pm: Derrick Rose is still fighting back spasms and may be limited in this game. But really, does that matter? If you're a Bobcraps fan, you probably are just numb by this point aren't you? It's like a Billy Joel song.

Bucks at Cavaliers, 7:30pm: No Kyrie Irving tonight. SO much for there being any reason to watch this game.

Nyets at Pistons, 7:30pm: The last time the Nyets won a game was against the Pistons a week ago. They have lost four straight since. I don't need to say anything else about how crappy this game will be, do I?

Trail Blazers at Hornets, 8:00pm: Ready for your mind to be blown? Check this out: "Portland has the best point differential in the West, and are 9th in the conference. I don't even..."

Mavericks at Timberwolves, 8:00pm: The Mavs have lost two straight to the Timberwolves AND Kevin Love is back from a suspension tonight. That's got to be enough for Rick Carlisle to break out in a cold sweat.

Pacers at Grizzlies, 8:00pm: Quincy Pondexter scored a career-high 17 points the other night. The bad news? This is really hurting his chances of making the Null-Star team for a second straight season.

Suns at Kings, NBA TV, 10:00pm: Excremento is looking to win their fourth consecutive home game. Their home record is 7-4. I am extremely confused. (Note: I am perpetually confused. This is just worse than normal.)

Nuggets at Pacers, 7:00pm: The Nuggets have dropped five straight games. But they're still second in their conference! No need to panic yet. You know, except for the whole "they've lost five straight" thing.

76ers at Cavaliers, 7:30pm: Fair warning. Kyrie Irving has already been ruled out of this game as well.

Knicks at Timberwolves, 8:00pm: No, I'm not done posing about Linsanity. Because the Taiwanese animation guys are at it again! Enjoy:

Trail Blazers at Nyets, 8:30pm: Well, the Keith Bogans experiment sure didn't last long, did it? He's already done for the season.

Magic at Bucks, 9:00pm: So what team will he end up on? No, I'm not talking about Dwight Howard again. I'm talking about Brandon Jennings! Sigh.

Bulls at Celtics, ABC, 3:30pm: I'm just going to say it: I hate it when two teams I like play each other. I really do.

Heat at Hawks, ESPN, 7:00pm: You just know they're going to play the most boring QUADRUPLE overtime game in history just to screw with us.

Jazz at Grizzlies, ESPN, 9:30pm: Prepare yourself for Valentine's Day folks. You need to get you some Memphis Grizzlies Valentine's Day cards. I cannot stress enough how amazing these are, and I'm pretty certain that giving your sweetheart one of these cards WILL get you laid. It has even better odds than Sex Panther.

Lakers at Craptors, 1:00pm: Well, at least we're getting the bad game out of the way early...

Rockets at Warriors, 9:00pm: I always enjoy it when teams have an identity. For example, the Warriors. They're 5th in points per game... and 30th in points allowed per game. So even with a coaching change, they're still the good ol' Warriors we've come to know and love!

"I don’t even know what the fuck is going on," Bryant said. "What the fuck is going on? Who is this kid? I’ve heard about him and stuff like that, but what’s he been doing? Is he getting like triple-doubles or some shit? He’s averaging 28 and eight? No shit. If he’s playing well, I’ll just have to deal with him."

When asked if he would guard Lin, Kobe gave what might have been the greatest answer to any question ever asked: "Jesus Christ. Let's not get ahead of ourselves."

Silvio said...
Linsanity: it reminds me of Eagles praising themselves for visionary signing Michael Vick after his stint in prison. In reality, they declared Kevin Kolb starter, and (what they considered backup material back at the time) Vick only got to play after Kolb's injury.
Jeremy Lin was third-stringer for Bricks, in fact 4th on PG depth chart if we count injured Baron Davis. Should Baron healed in time, they'd waive Lin last month and as of now he'd look to latch somewhere on a 10-day contract. So much about Bricks talent evaluation, no better than Eagles one. Or this is simply fluke and Lin is to cool down soon. Probably combination of both.
About Bricks being considered contenders by some after 4 Lin-fueled wins. What a crap. FFS, they're 3 wins bellow 50% . They'll be lucky if they beat Cavs and Bucks for 8th place on East. Bogut injured (as usual), Irving's concussion and Magic meltdown makes me think Knicks are going to grab 8th, if not 7th seed. But that's about it, one and out, versus Bulls or cHeats in best-of-7 ... win maybe, two if they're lucky. Don't get me wrong, I have nothing against Lin and I'm glad for kid getting the chance and taking most of it - but to heavily lean on poor man's Ramon Sessions ... good luck with it.


About Lakers and Celtics. It seems it was so long ago, but this two old men teams were known as contenders in near past, in fact both won championship during previous 5 seasons.
Day after LA team won Boston team in unwatchable (175 points with overtime) game, both teams showed true colors:
Celtics spanked by 8-19 Raptors sans Bragnani. While not much better, Meloless i Amarele'''''''ss Bricks kickassed Lakers.
That is more like it, combined zero wins at Friday, unfortunately at Thursday one of this two overrated teams had to win.
2/11/2012 8:13 AM

Anonymous said...
Man, the Nyets sure are busy tonight. What with playing the Spurs and the Blazers within an hour of each other.
2/11/2012 8:05 PM

JJ said...
Lin seemed understandably tired tonight, flying to Minnesota right after big Laker's game yesterday. So, he definitely struggled near the end. But, Knicks still pulled out a comeback win despite Kevin Love's monster game (Pekovic had a good game too). I think this was possible because of Lin's most underestimated quality - inspiring his teammates. I don't know when was the last time I saw Knicks playing their butt off, but they're doing it now. Pretty amazing that Knicks got the season's longest winning streak while both Carmelo and Amare are out. Linsane!

As most people are predicting, Amare should fit back in great. Although I have doubts about Melo like most people, I think Lin will make him fit in well too. He doesn't back down from anyone so I don't think he'll let Melo force him into bad basketball decisions (aka give Melo ball and get out of the way).
2/11/2012 9:49 PM

Ragib said...
"Heat at Hawks, ESPN, 7:00pm: You just know they're going to play the most boring QUADRUPLE overtime game in history just to screw with us."

Paul said...
@Silvio:
Celtics and Lakers overrated? Nobody in the media or this blog has put them atop any kind of rankings this season. Don't know how you would come to say they are both "overrated".

BTW can't wait for more Taiwanese animations. Linsanity is the gift that keeps on giving lol
2/13/2012 4:18 AM

Bing said...
Wonder if Mr Anti Kobe (@truehoop) will have a Mamba is clutch story online today?
No. Chance. In. Hell.

Michael Hsu said...
Kobe wasn't clutch. It's all his missed shots in the 3 quarter that brought the raptors back into the game. Law of averages says that if he chucks up enough shots then some will go in. The Lakers were leading by 18 at one point.
2/13/2012 1:05 PM

Anonymous said...
On a personal note, I feel like bawful is going through a pretty rough time due to the lack of updates this season. As a long time reader, it just doesn't feel the same. Whatever it is you're going through Mr Bawful, I wish you all the best and hope life treats you well.
2/13/2012 3:54 PM

Michael Hsu said...
So what you are saying is that Kobe missed all those shots in the 3rd quarter on purpose so he could do end game heroics.

kazek said...
No offense, Michael Hsu, but I think you're unfairly putting words into people's mouths. I've always taken "clutchness" as the capacity for end game heroics to make that extra push for a win. Regardless of your personal agreement as to whether or not Kobe is actually clutch (there are plenty of arguments for both sides here, so I'm not even going to delve into it), what he did against the Raptors is considered clutch as he came through in the end. It's fair to say that Kobe's misses in the third contributed to the Raptors coming back and setting up a situation where end games were (unfortunately) needed against such a crappy team but by making arguments like you did earlier in this section just takes the validity out of your statements and makes you look unconvincing overall with a side of blind, annoying hatred.