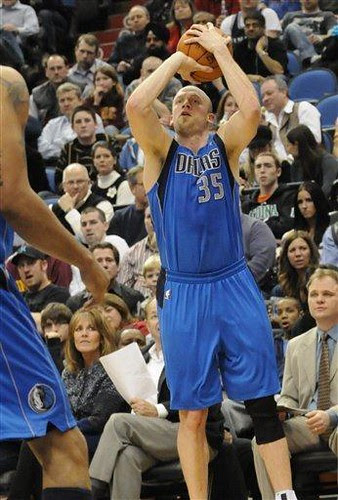 Come on, T-Wolves. You got dominated by this guy? Really??
Fake Twitter accounts can be hit or miss, but I hold high hopes for the new Fake Tom Thibodeau account based on this gem: "Caught behind the K Love Dbl Dbl hoopla, yesterday Eddy Curry broke his own record. Two Dbl cheese burgers a day for 1648 consecutive days." 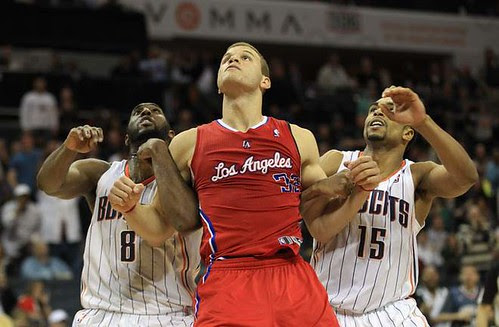 Blake Griffin is so badass he needs two escorts 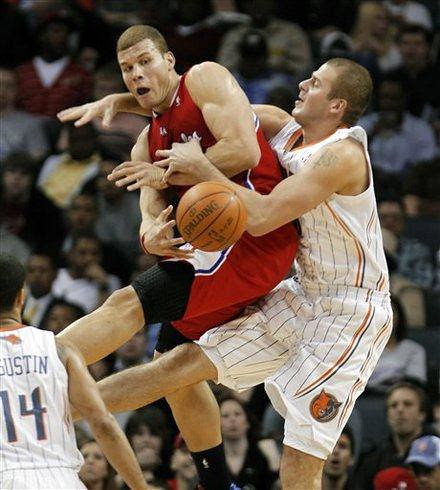 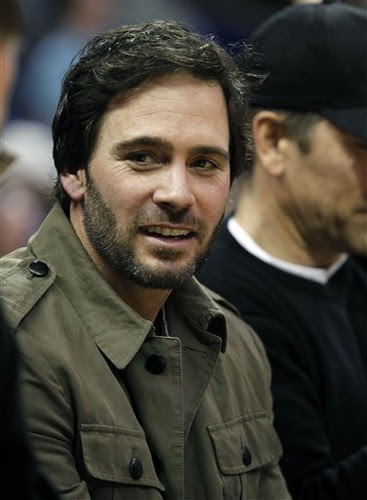 5-time NASCAR champ Jimmie Johnson is all about winning. Why the hell was he at a Clippers/Bobcraps game??? 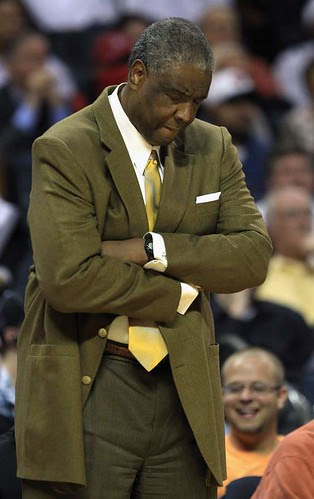 Nationally Televised Games:
Frail Blazers at Heat, NBA TV, 7:30pm: Yeah, we already used this earlier today in the WOTN. But damnit, it's worth seeing again, so here it is: the 2011 Miami Heat Clutch Reel.

All The Other Games:
Lakers at Hawks, 7pm: Here's a fantastic post from Kid Canada: Ron Artest ups his game to out-crazy Charlie Sheen. We can only hope.

Warriors at Cadavers, 7pm: Wow, this is a depressing game. I wish we could go back in time to when the Warriors actually mattered... What's this? Saturn's ice-covered moon Enceladus generates 15.8 gigawatts of heat power?. Great scott! It could go to 1955 and back six times if it rotated at 88mph! BRB, go watch the Warriors win the NBA championship.

76ers at Pacers, 7pm: The Sixers are 8-2 over their last 10 games. Are we really sure this is the same team that started the season losing game after game? Or did they get replaced by pod people who can actually ball?

Bucks at Wizards Generals, 7pm: Jeez. I swear, these Bucks games are unwatchable. You'd be better off watching this dude play Enter Sandman on a ukulele.

Rockets at Suns, 9pm: It's the Aaron Brooks/Goran Dragic post-trade showdown we've all been waiting for!!

Basketbawful said...
Dan B. -- I want you to know that the Cardinal picture was my original first choice for today's WotN post. The those two Blake Griffin pics. Then the Paul Silas pic. But each time, I was like, "No, no, Dan's gonna wanna use those."
3/08/2011 5:22 PM

Basketbawful said...
I wonder, has anybody noticed that I'm pretending Vince Carter isn't on the Suns? And that I avoid pretty much any mention of him anymore?
3/08/2011 5:22 PM

elbow greater than face said...
After the fail in Orlando I'm pretending V.C. isn't on this planet so I get where you're coming from.

Thanks much for the great "Janitor" pic too! Something about that guy making other players and or teams look stupid just warms the heart.
3/08/2011 5:44 PM

Now that you mention it...it has been kind of strange not reading about the silly shenanigans Vag Carter commits. It felt like something was missing and now I know what it is.

Dan B. said...
Basketbawful -- That's awesome. Even better, that Joakim Noah pic was one of my original selections too.

Now that you mention it, I think I have only made fun of Vince Who? like twice in the past month. It makes me happier when I forget he's breathing the same air as Steve Nash.
3/08/2011 6:56 PM

Bakes said...
Another Miami loss? I wonder how many they'll lose in a row.

tonious35 said...
As a long time Raptors fan I have witnessed this occurrence:

Shrugz said...
Bosh with a single single!!!
welcome to the suck!

chris said...
A new website that is appropriate for tonight's proceedings:

Andrei said...
Everyone wants to focus on the Heats scoring and how no one outside the big two contributed. But they didn't need scoring. They shot over 50% and Wade was unstoppable at the end. The only difference was rebounding. The Blazers killed them on the offensive glass. When I look at Bosh's single single, the 7 points doesn't stand out to me, it's the 4 rebounds that is bothersome.
3/08/2011 9:37 PM

nightdreamer said...
Also I find it funny that Gerald Wallace's best game as a Blazer is against Heat.

Marylander said...
Dear Bawful, sorry but no mention of this great Phil Jackson quote on the "Crygate"?

"This is the NBA: No Boys Allowed. Big boys don't cry. But, if you're going to do it, do it in the toilet where no one can see."

Karc said...
Lakers-Heat has "marijuana game" written all over it.

Unknown said...
Brad "cornrows" Miller just screwed the Rockets over, for the love of everything mention him tomorrow.

Also Dwade and James were 2 of the "Top 3 Performers" for tonight after a butt whopping by Portland, doesn't that just perfectly sum up their season?
3/08/2011 10:38 PM

Jabari said...
Basketbawful said...
I wonder, has anybody noticed that I'm pretending Vince Carter isn't on the Suns? And that I avoid pretty much any mention of him anymore?

AnacondaHL said...
Ugh. I may literally get a heart attack from these Suns.

Patrick said...
It's very strange to see Wade and James putting up good numbers (I didn't watch the game at all) and *still* losing.

That said, I kind of feel sorry for the Heat. They do get flayed without mercy for every mistake, made in games that - let's face it - won't amount to much as the playoffs come around. I'm not hyping the Heat's playoff chances, I'm just saying everyone here knows that the regular season doesn't amount to much.
3/09/2011 12:50 AM

Anonymous said...
The +/- in the Blazers/Heat game was interesting:

Factfinder said...
“How do we explain it? We can’t,” James said. “This isn’t rock bottom for us. Crazy thing is, we could lose every game and still make the playoffs in the Eastern Conference.”

elbow greater than face said...
@ AnacondaHL thanks for the Brad Miller footagee! I am so happy that worthless bastard isn't with the Bulls anymore.
3/09/2011 1:47 AM

The Nightbringer said...
With such fail abound lately, I do have good news to bring, for Kings fans at least. The Maloofs have resigned their ownership into more capable hands. Hands that can build dams. Dams that can withstand the strongest torrent.. or hydro pump in most cases.

Ladies and gentlemen, it is to my great enjoyment that I introduce to you...

stephanie g said...
Lots of powerless forward action in this Heat-Portland game. Both Bosh and Aldridge finished with only 4 boards. Even worse for Bosh since he played a lot of C with LeBron at the 4.

TeamD said...
"I have given everything I could to basketball and now I’d like to spend more time with my family,” Ilgauskas told alietuvis.com after the Heat lost to the Chicago Bulls, led by the super-athletic point guard Derrick Rose. "

The most interesting in that statement is that for a few months now i sense a push for Derick Rose to the media, i don't know why. I mean he's a great player, he had lots of fame before but know its more obvious in your face style, just like this out of place comment in someone's article "led by the super-athletic point guard Derrick Rose".

Stockton said...
Oh, I remember those good ol'days in which the Heat were a sure lock for 70 wins... and loosing 2 in a row was as impossible as gravity stopping and everyone start flying...
The Heat had 2 clutch stars... one of the best big men in the league... a variety of role players, include an impressive 2nd line of F/Cs, in Anthony, Ilgauskas, Magloire and Howard...
I'm remembering those wise words from ESPN and afiliates, while beatles "yesterday" passes un my mind...
3/09/2011 8:10 AM
Post a Comment
<< Home
Subscribe
RSS Feed
Mailing List