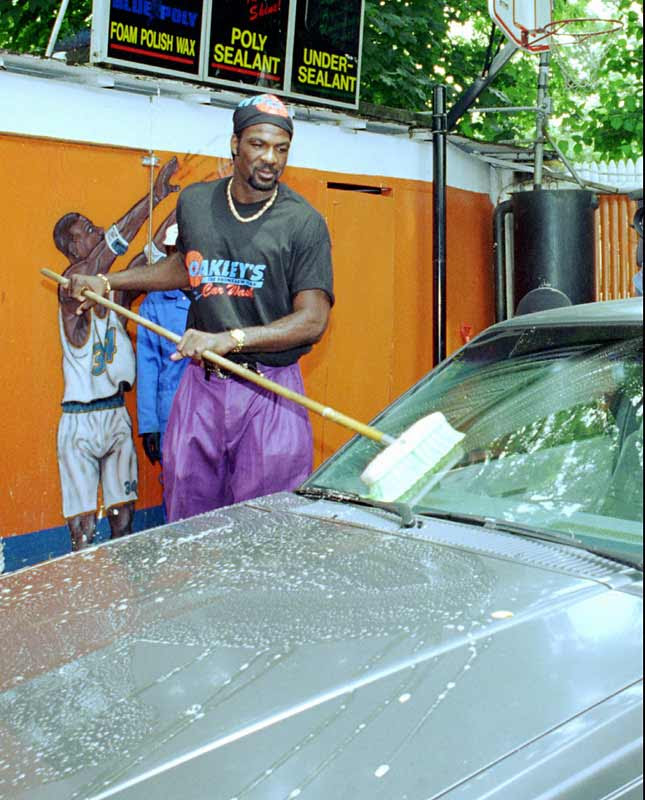 The Charles Oakley carwash. What??
(via Andy Gray's SI Vault)
Welcome to another BAD Weekend Watch. Are you excited? It's only one more week until Christmas! If nothing else, that means some good NBA games will be on TV that day, even if you don't get the present you really wanted.

No NBA2K10 update today. Sorry. Bowling last night, so I DVR'd Jersey Shore to watch this afternoon after work, and then going out for a friend's birthday tonight. (Believe it or not, I sometimes have something resembling a life. Sometimes.) However, my next game is against the Lakers. I'm sure I'll have something interesting to say about that one.

Lots of games. Let's get to it. 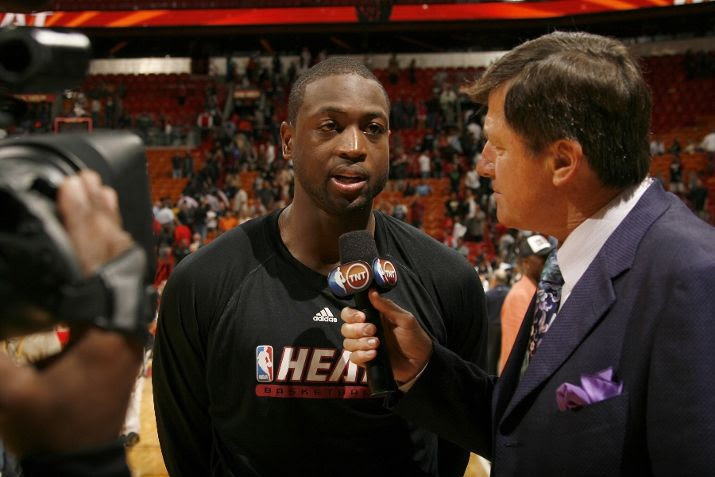 Craig Sager wearing a normal looking suit again??? What the hell is going on? 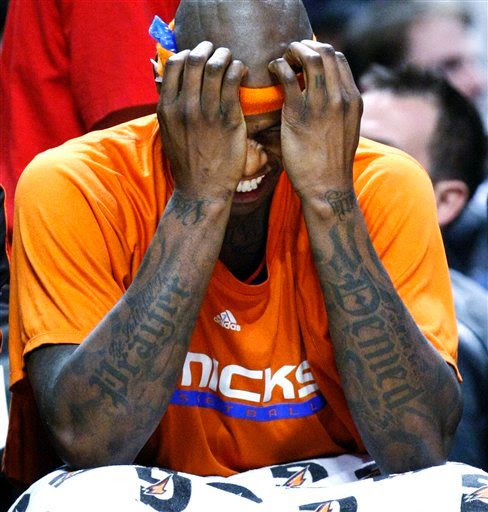 If you ever doubted how painful it is to play for the Knicks, Al Harrington has something to say about it. 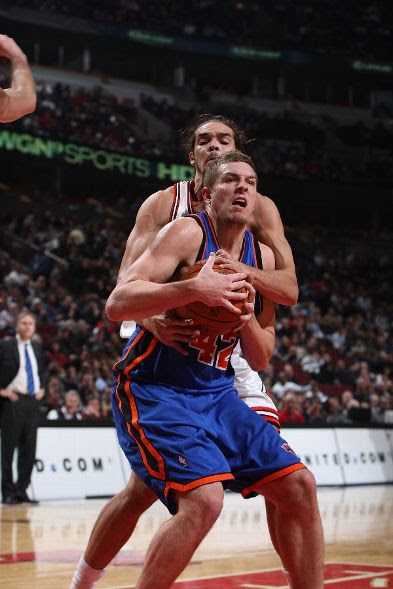 You know, I always expected Joakim Noah to be on the other side of this man love situation... 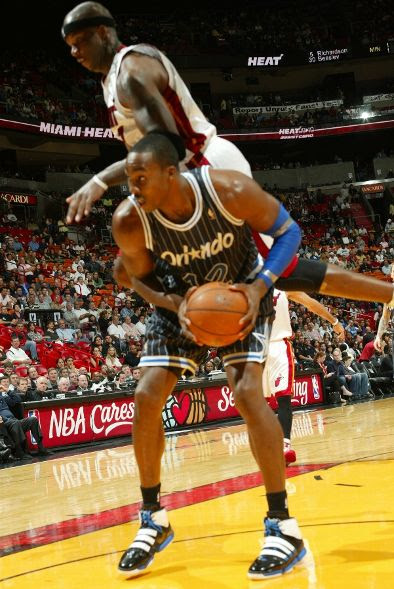 If you're an MST3K fan like me, I'm sure Jermaine O'Neal's flight reminds you of the Puma Man.

Wizards Generals at Warriors: Can someone please explain to me how we got Generals/Kings and Generals/Warriors on national TV in one week?

All The Other Friday Games:
Nyets at Raptors: The Raptors have been employing a swiss cheese defensive scheme this year. Good thing for them the Nyets' offensive scheme is simply that -- offensive.

Jazz at Hawks: The Hawks are sneaky good this year. Five wins in a row? Not too shabby. This could be a pretty good game.

76ers at Celtics: Did you know Allen Iverson has already had to have fluid drained off his arthritic knee twice this week? That's your Answer, Philly?

Nuggets at Hornets: Billups is day-to-day with a strained groin. Okay, I'll pause for a minute so you can laugh like a 12 year old... Done laughing? All right, let's move on

Kings at Timberwolves: This game is so bawful, Accuscore has Minnesota favored 54% to 46% in this game, despite Minnesota being 4-22 and Sacramento being 11-13. My head hurts.

Clippers at Knicks: The Clippers are the healthiest they've been in a long time, and have won two straight. Are they still who we thought they were? Probably. But the D'Antoni-led Knicks will probably make it hard to find out.

Pistons at Thunder: Kevin Durant, history machine: "There's 82 games. You can't play well in all 82. That'd be nice, but I don't think that has ever happened."

Pacers at Grizzlies: With Danny Granger hurt, something called a "Troy Murphy" is the Pacers' leading scorer. Now, get this: when Murphy went down in November for six games, the Pacers went 5-1 without him. And this is now your leading scorer?

Rockets at Mavericks: The Mavs have won five straight. Think Dirk's back is hurting him? You know, because he's been carrying his team that whole stretch.

Nationally Televised Saturday Games:
Trailblazers at Magic: The Magic didn't look too hot the other night at Miami. Then again, what can you really expect from a team whose head coach is too busy stocking up on Astroglide to draw up plays?

All The Other Saturday Games:
Jazz at Bobcats: The Jazz will be tired, but the Bobcats also just plain aren't very good. Not a very watchable game.

Clippers at 76ers: Okay, both teams are on the wrong half of back-to-backs. Both teams suck. No good can come from this. I'm calling this the Basketbawful Game of the Weekend.

Hawks at Bulls: Considering the Hawks will be tired from a game against the Jazz, this game might be closer than you'd think. The Bulls will probably still find a way to lose, but still.

Thunder at Rockets: You know, the Rockets have one of the best mascots in sports, Clutch the Bear. Funny, ridiculously cute, etc. The Thunder, on the other hand... what the hell is with their mascot? Wow.

Pacers at Spurs: The Spurs are an aging shadow of their former selves, and they never play hard early in the season. And I still don't hold out much hope for the Pacers in this game.

Wizards Generals at Suns: The Generals are good at playing just well enough to lose a close game. This could be an exciting game, especially with Nash playing at home.

Nationally Televised Sunday Games:
Crabs at Mavericks: Another nationally televised LeBron game? Well, at least this time it's against the Mavericks. I'll let this one slide, Stern.

All The Other Sunday Games:
Hornets at Raptors: If Toronto just folded, would anyone really be all that upset? The only thing that comes to mind when I hear "Toronto Raptors" is this Oliver Miller picture. That's it.

Timberwolves at Celtics: I think this picture pretty well sums it up.

Lakers at Pistons: Kobe's probably going to be tired after scoring 48 points against the horrendous Nyets, proving his finger is fine. Possible trap game? Not likely, but just sayin'...

Trailblazers at Heat: The Blazers will be tired after a game against the Magic. The Magic just lost to the Heat the other night. This game is too meta for its own good.

Bobcats at Knicks: You know, this was almost a contender for the Basketbawful Game of the Weekend, but the Knicks are just slightly too good and interesting to watch to earn that award.

Labels: Bawful After Dark, there are so many bad games this weekend

Kcan said...
hey guys, matt,chris and the others!

we had an idea with my friends,which is, why don't you guys post weekly power ranking, but only in this case, they would be bawfulness of Fail rankings, from 1 to 30. that would be awesome. no one could challenge the nyets though...
12/18/2009 4:07 PM

kazam92 said...
I'm reading Simmons book and I just passed the part where he says Charles Oakley should be Shaft. After seeing that picture, I agree
12/18/2009 4:32 PM

dave m said...
Hey, hey, hey. The Raptors deserve any and all of the ridicule you can hurl, but uhm, I'd be upset if they folded. And some friends of mine too. And some other people. Considering they haven't been relevant throughout the entirety of their 15 year history, attendance is pretty good. And a bunch of us, ehh, really want them to do well someday.
12/18/2009 4:44 PM

Dan B. said...
Dave M -- You know all eight of the Raptors fans? That's pretty cool.

Wild Yams said...
Kcan - Actually Mr. Bawful used to team up with Hardwood Paroxysm every week for Powerless Rankings. You'll have to ask him why they stopped doing them though, cause I don't know the reason.
12/18/2009 5:57 PM

Knicknamer said...
Not sure if someone already posted this but.....I'm having a very hard time saying "no homo" when I look at this.

chris said...
WY: I'm all for another set of Powerless Rankings, baby!

chris said...
BTW, yeah, Accuscore was right about the Wolves beating the purple paupers. I guess that one-game winning streak was just too much pressure, eh?
12/18/2009 9:28 PM

AnacondaHL said...
LOL Dan B, messing with the Raptors truthers, c'mon man, that's too easy. Shh, don't remind them that even though Air Canada Center/Centre has one of the biggest capacities, their attendance record is decidedly average.
12/18/2009 9:55 PM

Unknown said...
Carl Landry of my Rockets gets called for a foul, after Dirk elbows him in the face, embedding two fragments of Carls teeth in Dirks elbow. Carl Landry has 2 missing and 5 cracked teeth on the play and stands there like a man while Dirk runs around crying and only has to get 3 stitches. Bawfulness, pure and simple.
12/18/2009 11:11 PM

Anonymous said...
Derron "The Best PG in the world" Williams submits a stellar 2pts 4assists in a car crash of a game against Atlanta. Somewhere Chris Paul is pissing his pants from laughing too hard.
12/18/2009 11:47 PM

AnacondaHL said...
I just got video of the Dirk Landry collision.

Wild Yams said...
Man, apparently Elton Bland really came alive tonight. Meanwhile Paul "Fake Willis Reed" Pierce had a real stinker, with only 9 points for The Truth in a Boston home loss to the 76ers. Weird how Allen Iverson didn't play in this big Philly upset, I wonder if that's just a coincidence?

Also, good job by Rasheed Wallace tonight. Only 9 minutes for Mr. T after he got thrown out for consecutive techs, which he then followed by going after the ref who tossed him, with Sheed having to be restrained by the coaching staff (there might be a suspension for that, btw). Maybe the Celtics coulda used him in the second half while they were blowing that 15 point lead? Just sayin'. It should be pointed out that Sheed now has 10 technicals for the season, and that is important because the NBA rules state that beginning with a player's 16th technical foul for the season, that T and every other one the player receives after it will result in a one game suspension. Also, from the recap over on ESPN: Wallace was ejected for the 30th time in his NBA career -- the most for any player since 1992. I guess congrats are in order?
12/19/2009 3:00 AM

JerryT said...
now, is it just me, or is there a deeper plan in the nets game?
in my, humble, opinion they just want to have a bulls-like score at the end of the season, involving the numbers 72 and 10. Some misunderstanding as for the correct order of these in the win/loss columns may have taken place. but hey, nobody's perfect.
12/19/2009 7:36 AM

stephanie g said...
Only two highlights of the Indy/Memphis game:

AnacondaHL said...
Jaroslaw: Realizing the immense amount of Cubs-style press they received for failing, why stop at 10-72? Aim for the record 9-73, which the Nets are on track to beat! Minny has a chance too!

DKH said...
Yea, I never really understood why people loved Dirk so much. I mean, he's great on offense because he can shoot and drive at 7 feet. But so much of his offense seems to involve throwing elbows and clearing space. Then he has an open shot.

I think KG could qualify as a Fortress of Balditude.

Barry said...
Can't fault Dirk for exploiting it though, DKH. I'd play strictly matador defense on that guy!

AnacondaHL said...
They almost wanted to sew up Dirk and send him back out there... with 2 of Landry's 3 teeth still embeded in his elbow.

Dan B. said...
Anon -- Z-Bo is still forever linked with the worst possession ever. That alone should be enough to merit a spot on the banner. Not to mention that picture is just amazingly bawful. I smile every time I see it.
12/20/2009 8:36 PM

uqkobi said...
Here's an idea I think might appeal to bawful readers - let's petition the nba for bawful playoffs where the worst teams play best of seven series and the team that loses goes into the next round! The finals would be awesome to watch, and cannon fodder for use bawful readers.
12/20/2009 10:33 PM

AnacondaHL said...
Should there be some lacktion category for going over 30 minutes without a single FGA, #PTA, or FTA? Was Jared Jeffries making some sort of statement or something?

AnacondaHL: Man, I don't even know what to say about that, though he did get five boards, and according to an article four days ago from the New York Times, he's the "heart" of the Knicks' recent attempts at respectability. Maybe in the Jud Buechler sense?

I just have to quote the opening lines:

CHICAGO — Nearly everything Jared Jeffries does on the court ranges from unsightly to ugly. He does not score. He rebounds. He is not a high-flying athlete who attacks the rim. In 463 career games, Jeffries has scored 20 or more points only twice. He is the one who draws charges. Jeffries possesses little flash, but many elbow burns.

AND, this caption to this picture is priceless: