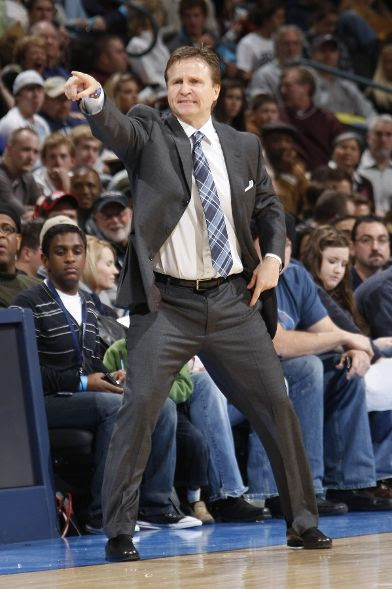 Scott Brooks brings us his best Saturday Night Fever impression
Welcome to your first post-Christmas BAD. We're in that odd lull between Christmas and New Year's where nobody really feels in-synch, and it's hard to get motivated to do any real work. Also factor in that I'm currently down for the count with a nasty sinus infection (I lost my voice last evening, and barely can speak right now), and I just really can't put that much effort into today's post. So, apologies in advance for mailing this one in like a team tanking the rest of this season hoping to win the John Wall Sweepstakes.

Your Quick NBA 2K10 Update:
After winning the final several games of our regular season, we slotted into the playoffs against the Denver Nuggets the first round. I was not happy about this, since Chauncey Billups has been known to light me up from downtown, and he's an extremely quick defender in this game, which makes it difficult to roll around him. However, I did a good job of deciding when to pass and when to shoot, and played some tough defense and we rolled through them. I averaged 38 points, 10 assists, 3 rebounds, and 2.3 steals per game, and hit a ridiculous buzzer-beater three to get 50 points in the deciding game. I also got some help from a monster game from Tim Duncan where he shot 100% from the field and scored 40 points in the penultimate game.

Now, the next round is against the Lakers. I have played two games so far. We handily won the first game -- I put up an unholy defensive effort and held Derek Fisher to going 2-13 from three point range, and I put up another 38 point game, but this one was more about hitting jumpers and finger-rolls than taking it aggressively to the hoop. The next game, however, was one of those "Fuck You, You Aren't Winning This Game" type of losses. I actually quit after the third quarter and tried again four different times (something I almost never do) simply because the game was SO obviously out to get me.

My teammates hit a grand total of four 3-pointers in those four attempts, and bricked a ton of other jumpers, and did NOT bring down rebounds. On the other end of the court, the Lakers shot 80% from the field one game, and in the others, Fisher, Gasol, and Kobe all shot lights out even if you got a hand in their faces. Finally, I just decided to play through and take the loss the game was determined to give me. I managed to single-handedly lead us back from a 12 point deficit to take a five point lead heading into the fourth quarter. But then the game went back into F-U mode, and Sasha Vujacic WENT OFF and drained three-consecutive treys while my teammates and I all went absolutely ice-cold from the field for five solid minutes, making only one basket in that entire stretch. We went on to lose by a dozen points. Ridiculous. When Sasha Vujacic kills you, what can you do? 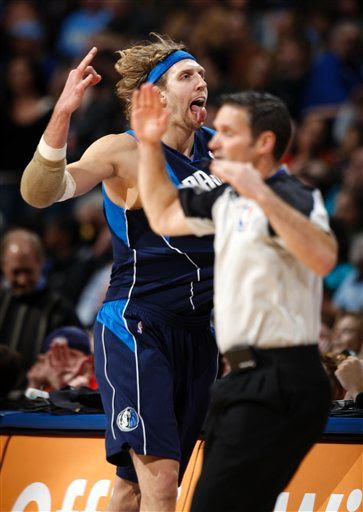 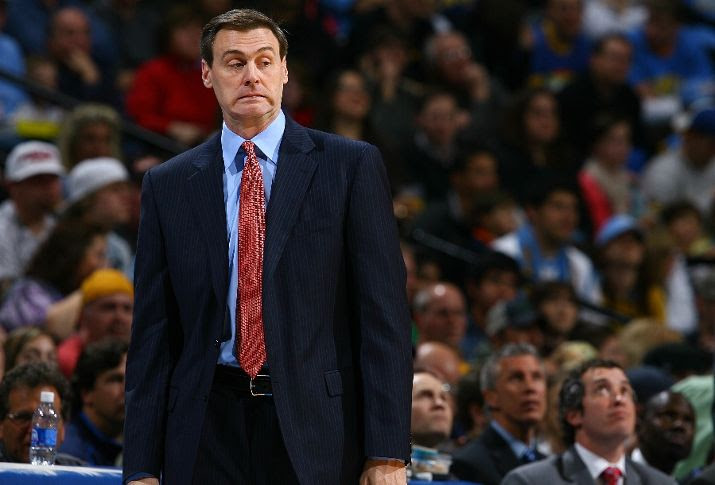 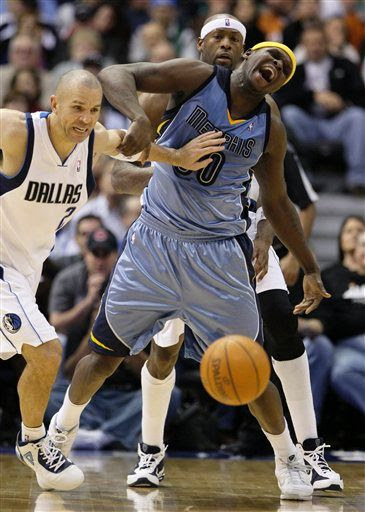 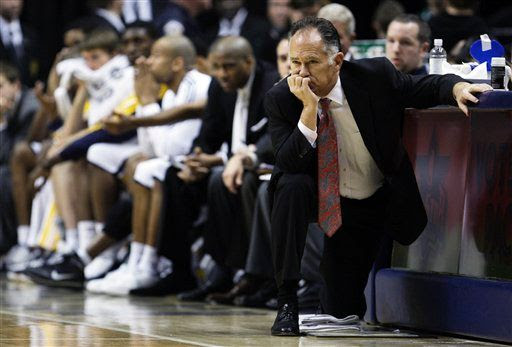 If you were the Pacers coach, this would be your default expression as well 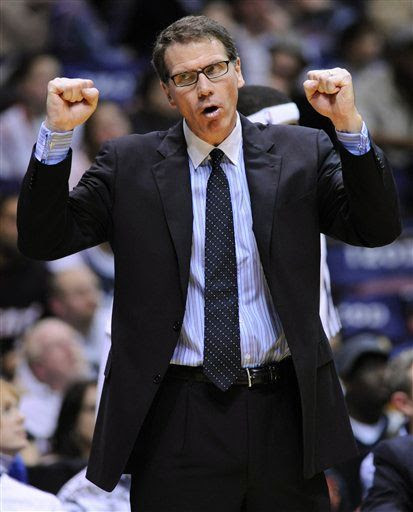 If you had a name as awesome as "Kiki Vandeweghe," this would also be your default expression

Nationally Televised Games:
Wizards Generals at Grizzlies: Okay, seriously, who is this doppleganger claiming to be Zach Randolph, and what have they done with the real Z-Bo? Maybe Jean Claude Van Damme is branching out into other sports?

All The Other Games:
Bucks at Bobcats: Despite their strong start, Milwaukee has now dropped 15 of 17, and Brandon Jennings is only shooting 34.7% during that stretch. That's a little closer to what I expected before the season started.

Thunder at Nyets: The Nyets continue to average under 90 points per game on offense in their quest to be the worst team ever. Disgusting. They get the Basketbawful Game of the Night by default.

Lakers at Suns: Kobe is averaging 38 points per game in his last three trips to Phoenix. Defense? Anybody? Oh, right, it's the Suns. Nevermind.

76ers at Trail Blazers: After seeing that decidedly-incomplete graphic of Ail Blazers injuries this season, I still have no idea why they continue to win basketball games. Insane. I am in awe.

Nuggets at Kings: Now, speaking of injuries, isn't it amazing how much Chauncey Billups means to this Nuggets team? Sacramento could very well win this one. And that is just depressing.

Celtics at Warriors: After losing to the Clippers (the Clippers!!!), I have no idea what to think about this game. Can somebody please teach Rondo how to shoot a freaking free throw? Can't he learn anything from Ray Allen and his .921 FT%?

AnacondaHL said...
BasketBawful editors and authors: We should just link ESPN's worst teams ever tracker every time the Nets are mentioned. (ex. The New Jersey Nets continue their march towards suck history, with another loss to *insert team other than Chicago here*.) Since it is updated automatically, it shows that through 30 games the Nets have tied the worst record at 2-28. The next milestone is beating the Mavs's 2-40, and then the elusive 9-73.
12/28/2009 4:16 PM

chris said...
Dan B. - What's so depresing about Tyreke the Freak taking a somewhat depleted Kings team into a realm of competitiveness!? OT against the Crabs and Lakers, while not wins in either case, at the very least shows that the undermanned purple paupers can hang.
12/28/2009 5:51 PM

chris said...
BTW, AHL, "Team other than Chicago" needs to be used as a regular term as well, assuming that Vinnie Smallz's reign represents the Mendoza Line of team functionality.
12/28/2009 5:52 PM

Dunpizzle said...
Ray Allen get his Tiger Woods on

Look what I found by watching the Animal Planet: The Popovich Comedy Pet Theater.

Bakes said...
LA vs Phoenix - Anyone just see the most blatant violation during a jump ball ever? First, a jump ball was called instead of a foul when Dudley very clearly hit Bynum's wrist as he was going up, and then when the ball is tossed for a jump, Bynum jumps and tips it and Dudley doesn't jump at all. He just runs to the other side and grabs the tip from Bynum.

Half the Lakers were standing around after Dudley clearly makes the violation and passes it up court, assuming a proper call will be whistled, but nope. The only whistle that sounds is on the other end AGAINAST Farmar when another Suns player went for a layup. A foul that shouldn't have even been during play time since the violation should have been called.

Am I wrong or doesn't the other guy kinda have to, you know, JUMP during a jump ball? He can't just take off and grab the ball after it's been tipped. A very obvious violation. So the officials gather after calling the foul on Farmar and you'd ASSUME they'd be talking about their blatant non-call but nope - the foul on Farmar stands and the Suns get away with an amazing and obvious violation.

AnacondaHL said...
I'm quite satisfied with the Suns game. If you told me that the Lakers would break down and the Suns would thrive in a poorly officiated game, and the Suns wouldn't give up their lead, and Robin Lopez would play well against one of the premier frontcourts in the NBA, I would have told you to go back to bizzaro reverse land.
12/28/2009 10:32 PM

chris said...
Wow, the Kings WITHOUT Tyreke The Freak tonight...beat the Nuggets (without Chauncey Billups, mind you)!!!

Dan B. said...
kazam92 -- (I'm playing 8 minute quarters, bear that in mind) I'm only a 69 overall I believe. I created myself using the Athletic Point Guard template. Use skill points on the mental aspects early on -- your Consistency is the #1 thing to hit hard. Once your consistency is in the 80s and 90s, you can get on hot shooting streaks rather easily. (I usually shoot anywhere between 55% and 75% from the field. I didn't think to adjust the game sliders before starting My Player's career, and the default shooting percentages are all way too high in my opinion)

Also, if you like driving to the basket (which I do since my jumpshot is pretty horrendous still, and speed is the best attribute I have going for me), make sure you add skill points to your layups. It's easier to not only hit layups, but also hit them when there's contact so you can draw the foul for a three point play. I also found that adding to your vertical leap and your stamina are very useful, since this helps you get boards (and putbacks), and also get a cleaner shot against taller defenders. (Plus, you can eventually start to dunk, which gets you more skill points for each "highlight play" and the dunk is a high percentage shot of course!)

However, do NOT forget about boosting your defensive attributes. I actually boosted those BEFORE boosting my offensive ones, because defense is what wins games and championships. If you get killed by your man every trip down, you'll lose. Focus on your Defensive Awareness first in the Mental area, then focus on your on-ball defense in the Defense area.

And of course, the biggest key to scoring points? Smart play. Set picks for your teammates, look for the pass to the open man, drive the ball inside as much as possible and draw the defense away from the perimeter for open jumpers from your three-point shooters, etc. This way you will get assists, keep your teammates happy, get good teammate ratings, AND you will also help open up some floor for yourself to score as well. If I feed the ball inside to Duncan, sometimes they'll bring a double team or triple team on him, leaving me wide open to move into the paint and wait for Duncan to kick it over to me for an easy bucket.
12/29/2009 7:17 AM

Unknown said...
Thanks for the advice Dan B. I've got an All Around PG on the Spurs as well and I haven't touched consistency, lay up and vertical.

Dan B. said...
Fernando -- I can't stress Consistency enough. Vertical and Layups are nice to have, but not that important compared to Consistency. When you bump up your Consistency, you instantly become a less-shaky shooter from everywhere on the floor. If you are only a 43 from 3 point land like I am, you're still going to suck something awful from deep, but if you hit two or three straight buckets in the paint, you'll be much, much, much more likely to knock down 12 foot jumpers and get lucky bounces on tough shots and contact shots in the paint. Likewise, shooting in traffic and shooting off the dribble seem to be two big things to boost if you want to be able to hit jumpers.

I've found the key to shutting down Billups is to basically never leave him to doubleteam somebody else. Guard him close and aggressive, and keep him a little afraid of shooting. Play Bruce Bowen style defense basically. And try to anticipate the pick-and-roll. If you see someone coming up to set a screen, start moving in advance to block that angle.
12/29/2009 1:05 PM
Post a Comment
<< Home
Subscribe
RSS Feed
Mailing List