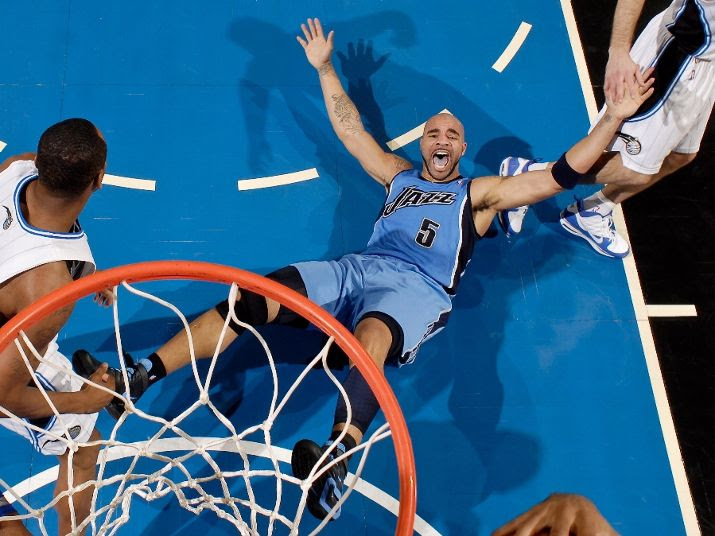 Welcome to another edition of BAD. After last night's unfathomably bad collapse by the Bulls, I feel our own Bawful head author (who is also the author of By The Horns) needs a nice distraction for at least one segment of this post. Thank God for Jim Zorn!

Worst of the Night - Footbawful Crossover:
The Washington Redskins: I honestly cannot remember chuckling at an NFL play quite as much as I did last night. The Redskins were getting pummeled by the Giants late in the first half, and they decided to just go into "screw it, we're going for the touchdown" mode right before halftime. As a result, they gave us one of the most confusingly bad fake field goal attempts I have ever seen.

(Before breaking down this epic fail, I'd like to point out that the 'Skins have Sherman Lewis calling passing plays, Sherman Smith calling running plays, and Jim Zorn calling fourth down plays. Not only does this make absolutely zero sense because it's just stupid to try and use that many playcallers at once, but it also is destined to fail simply because there's no way in the 21st century that you can find two effective playcallers named "Sherman.")

From what I understand, in a normal "swinging gate" gadget play (usually done on a two-point conversion attempt), everyone but the center and the holder shifts to one side, and the holder just tosses the ball back to the center (who becomes an eligible receiver) for the easy touchdown. But that's when you're right on top of the goal line. This time, it was roughly a 20 yard attempt! In this "Failgate" play (as it surely was called on Jim Zorn's playcalling sheet), apparently the plan was for a quick screen pass, or barring that, the holder Hunter Smith had to just throw up a lobbed pass and hope somebody on his team caught it. Brilliant!

When Giants coach Tom Coughlin saw the shift, he called a timeout to prepare his team. When they went back onto the field, Zorn's team showed the same exact formation and tried to run the same exact play they had planned before the timeout. Washington pulled this off once earlier this season on a different fake kick play. Now, you know the whole "fool me once, shame on you; fool me twic, shame on me" saying? Yeah, Coughlin was ready for the 'Skins to try this crap again. Needless to say, the throw into quintuple coverage was picked off, and the Redskins left the first half with a nice fat goose egg on the scoreboard.


Consider the reactions from the ESPN commentators, who normally are tripping over themselves to praise players left and right:

Mike Tirico: "What in the wide world was that? ... This is embarrassing."

Ron Jaworski: "I'm speechless. I don't know what to say."

I think that should sum up how indefensible this example of play-calling truly was. And yet, Jim Zorn tried to defend it! "I contemplated just kicking the field goal after (the timeout). The play was unique enough that I didn't think they saw what we were really trying to do. But they smelled it out pretty quickly. We didn't really have a chance."

Well, at least Zorn was right about that last sentence. 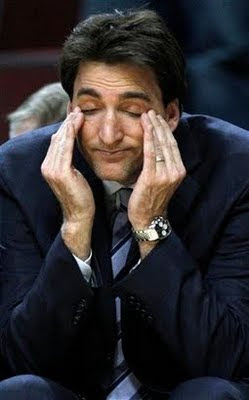 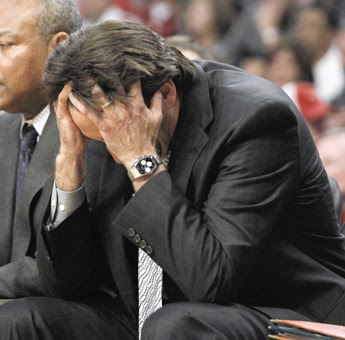 Even more self-explanatory than the last one. 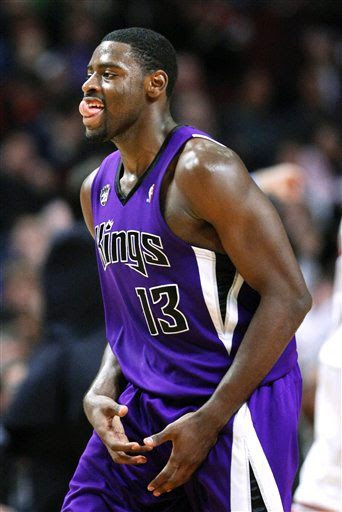 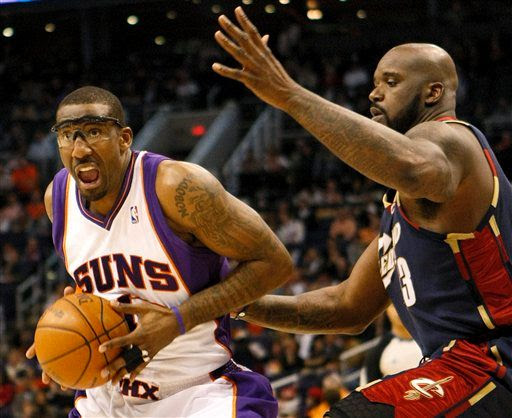 I wonder if Amar'''''e has to wear eye protection now because he actually has gotten poked in the eye by the random apostrophe action? 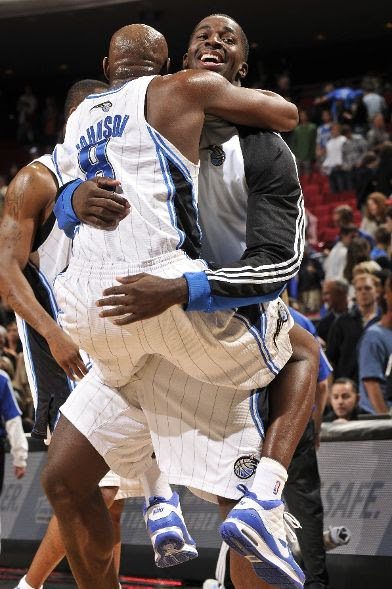 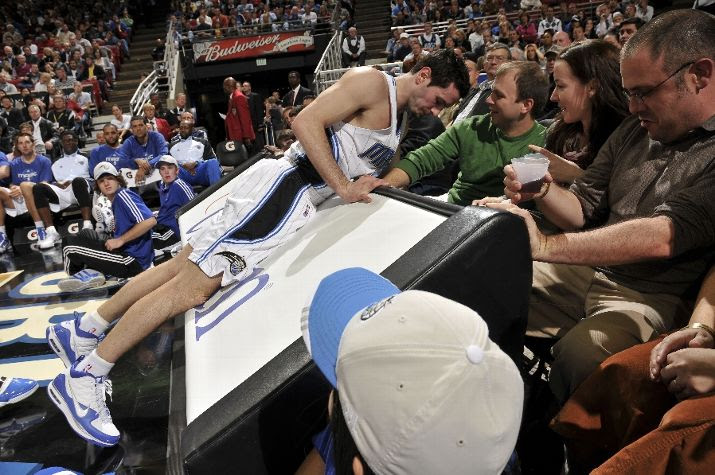 Redick is about two seconds from re-creating the Pauly D/Jwoww incident on Jersey Shore with Green Shirt Guy. 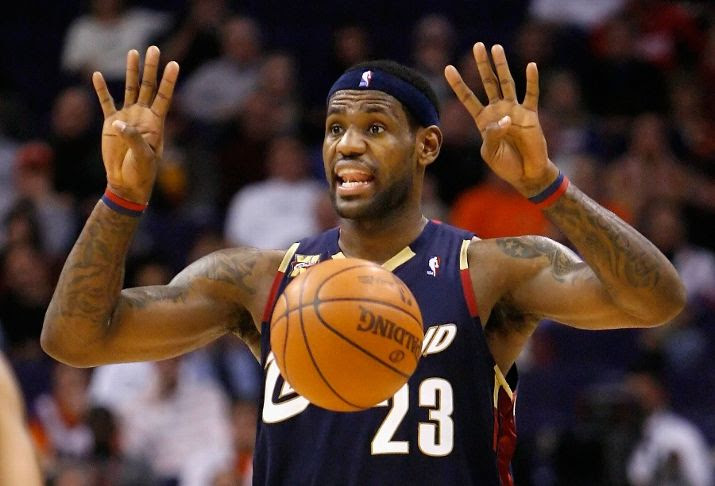 Apparently this is the play calling signal for "Imma drive the lane while everyone else stands still, okay?" 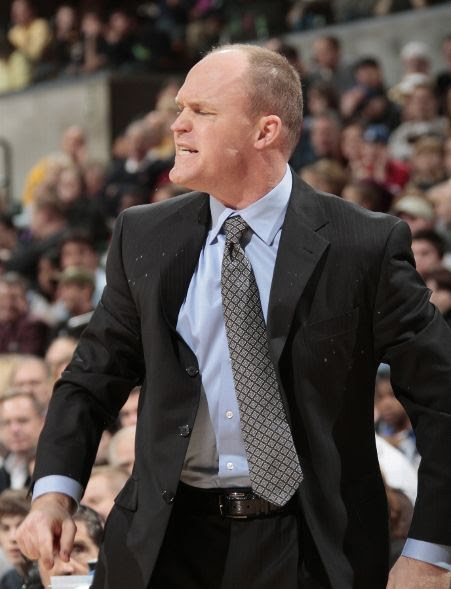 Pistons at Bobcats: Pistons head coach John Kuester had this to say about the Lakers game: "I thought we were going to beat them." I wouldn't even say that about this Bobcats game, John.

Pacers at Celtics: The Celtics already dropped a game to the horrendous 76ers. I just don't see them doing that again tonight.

Bulls at Knicks: You know what? After the Bulls' unfathomably bad late-game collapse to the Kings at home, this gets my Basketbawful Game of the Night designation.

Hawks at Timberwolves: Atlanta has the 4th highest Points For average in the Assocation. Minnesota's defensive effort reminds me of playing against the AI in Rookie mode in a video game. This one should get ugly.

Warriors at Grizzlies: Good ol' Golden State. Did you know Don Nelson's Warriors are giving up 111.6 points per game this season? It's not quite the infamous '90-'91 Nuggets, but it's still pretty bawful, if completely and totally unsurprising.

Clippers at Rockets: The Clippers are on the second night of a back to back and are deep into a long road trip. Throw in the inarguable truth that they, of course, are who we thought they were, and it's like the trifecta of fail.

Thunder at Lakers: Did you know... Shaun Livingston and his decimated knee still play for the Thunder? I know! I'm just as surprised as you! He does have ten whole points this season though, so at least we know he's not just a cardboard cutout sitting on the bench.

chris said...
Another fun fact from last night: According to the Sacramento Bee...

The Kings' made defensive stops on 31 of 40 Bulls' possessions to close the game out.

Basketbawful said...
The Kings' made defensive stops on 31 of 40 Bulls' possessions to close the game out.

Basketbawful said...
Sorry, Bulls down 22. Jonathan Bender has outscored and outrebounded the combo of Brad Miller and John Salmons. And Bender only has 2 points and 2 boards.

anne said...
Ok, I haven't posted here in forever, just lurking... but do the Trail Blazers have some sort of curse on their centers? Pryzbilla just got carted off after a knee injury that skeeved me out to see it. Knees aren't supposed to bend THAT far back!
12/22/2009 8:08 PM

emc503 said...
Blazers lose Przybilla. 7 of the 15 players on the roster are out with injury. And our head coach. Not to mention the fact that both our owner and an assistant have life threatening cancer. All of this AFTER the jail blazers era. Have we not suffered enough?
12/22/2009 8:34 PM

The problem with that is that Walton got us a championship before his knees turned to dust. We haven't even gotten that yet. Blazers fans would give anything for one more ring. I guess it just won't be this year.
12/22/2009 8:53 PM

Drew said...
@chris - I think emc503 was taking more about how morally broken the JailBlazers were, not just... broken, and all that we had to put up with from them off the court. No need to remind of those injuries either, the national/local press/everybody else loves to talk about 'em when ever they get a chance.
12/22/2009 9:23 PM

anne said...
You know, I'm watching Mavs/Blazers on LP, and I have to listen to the Blazers homer announcers when I'd rather listen to Bob and Mark for the Mavs because they're not such homers. Anyway, you would think after all of Portland's injury problems, they wouldn't wish injury on another team. But they are doing exactly that. They have said numerous times during the broadcast, both before and AFTER Pryzbilla got injured, how they wish someone would whack Nowitzki in the elbow to take him out of the game. Saying all of this despite the fact that the Blazers led most of the game. So Blazers fans, I think your homer announcers might be stat cursing your team on TOP of the Walton curse. I think they might be more irritating than the Spurs announcers, and that's saying something.
12/22/2009 9:28 PM

Drew said...
@chris - My formidable blazers fandom years started out under Adelman's reign, great coach and had Sabonis chosen to come over a little sooner might have even picked up another banner or two.

@anne - I agree that wishing injuries on another player are pretty terrible, more than anything it seemed to be reactionary towards the dirk/landry situation and dirk's perceived Charmin softness. Mike Rice is most definitely a homer but one of the most knowledgeable guys out there. Both guys do their homework. Your local announcers should be Homers imho, it's like their job.
12/22/2009 9:48 PM

AnacondaHL said...
chris: yea, I'd already seen those at hoopdata. It'll be interesting once data starts flowing and aggregating, but it still needs work, like there's repetition all over the place.

On the Chicago game:
Mike Breen: Not a lot of whistles so far in this. Game has a nice flow to it
Frazier: Yeah, they're letting the Bulls embarrass themselves at an efficient pace

Also, I have Noah and David Lee on my fantasy team, 21 rebounds a piece tonight oh yeaaa.

Basketbawful said...
Ok, I haven't posted here in forever, just lurking... but do the Trail Blazers have some sort of curse on their centers? Pryzbilla just got carted off after a knee injury that skeeved me out to see it. Knees aren't supposed to bend THAT far back!

Hey, welcome back to the comments page, anne. As for the Vanilla Godzilla's knee...well, the Curse of Walton is in full effect. What can we say?

emc503 said...
Yeah, Przybilla ruptured his patellar tendon and dislocated his patella as well. Gone for this season, and possibly part of next season. Um...at least we're 2-0 in games where we lose our starting center to a season ending knee injury? There's gotta be a stat for that somewhere....
12/22/2009 10:41 PM

Arson55 said...
Seems like there could be better signs of victory than: 'Yes! Another center down for the year! Mark another one down in the win column!'

chris said...
Drew: Yeah, it's worth noting that the Kings have not made the playoffs at all post-Adelman, and had only made them twice in their history previous! Westphal obviously is a huge breath of fresh air...but really...was this 3-year rebuild actually necessary here in Sactown!?

chris said...
So the Bulls lose again, this time to the Mike 'antoni Knicks. And you know it's bad when Sportsline chooses to mock the team's practice habits -

That wasn't the only indictment of Del Negro that emerged Tuesday night. The most troubling, to me, came during the layup line. Less than 24 hours after blowing a 35-point lead on their home floor, the Bulls were clowning around during warmups as though they were getting ready to play the Rockettes. Miller, who contributed nothing but a scowl after tipoff, exerted more energy blocking shots and throwing alley-oop bounce passes than he did in the game. I learned two things from watching the Bulls' layup drill: 1) Jannero Pargo can't dunk, despite a half dozen of his best efforts; and 2) The Bulls are an undisciplined mess, a team that lacked the conscience to be ashamed of what happened to them the night before.

Pete Elliott said...
That play is called the "Muddle Huddle" and it's supposed to confuse the hell out of the defense because the snapper becomes an eligible receiver as he's at the end of the line on the LOS.