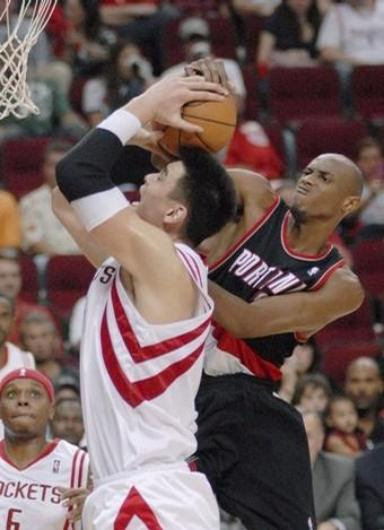 Going into this season, most people had Yao pegged as the best center in the league. As of right now, that is not the case. His stats -- 16.6 PPG, 9.1 RPG, 1.1 APG, 45 percent shooting -- are all down, and his Player Efficiency Rating (17.4) has dipped below 20 for the first time in his career. Even more troubling has been Yao's inability to get the ball over the rim. He's missed dunks. He's had dunks stuffed by opponents and the rim. He even airballed a dunk against the Clippers. The man is 7'6". How is that even possible?!

Here are the curent numbers on Yao, from the Yahoo box scores and 82games.com:

In "clutch time" -- the fourth quarter or overtime, less than 5 minutes left,
neither team ahead by more than 5 points -- Yao has yet to hit anything other than a jump shot...and 20 percent of those are getting blocked.

For the sake of comparison, Nate Robinson, who's 5'9", is getting only three percent of his shots blocked on the season. Which reminds me...

Labels: he is freaking huge so why can't he jump, Yao Ming, Yao Watch

XForce23 said...
I heard Kobe also eats all the cookies then puts back the empty box into the pantry.

And I saw that hilarious no-call on Pachulia . Maybe the refs have elevated Pachulia to all-star status in their books by giving him that...? Yeah, I don't think that's what happened.
11/12/2008 12:07 PM

Wild Yams said...
It's awesome that you've started this cause it was long overdue. Was Yao permanently damaged by that injury last year? What happened to him? He looks to be challenging for least athletic player in the league. He's almost into Shawn Bradley territory this season.
11/12/2008 1:12 PM

Anonymous said...
By the way, it should be mentioned that USA Today referred to Travis Outlaw as Bo Outlaw. Troutlaw is leading the league in three point percentage right now. This is especially fail because last year tons of news sources kept getting Travis' name wrong.
11/12/2008 1:38 PM

Raymond Blitzfucker said...
Ok, Yao can't dunk but maybe he has never had the skill set and the mentally to dunk a ball. Think about the fact he comes from a culture that puts a high price tag on staff like losing face. Why do people dunk? Easy points, to show off, to humiliate the opponent and if possible to rub one's man's region into another man's face. So chances are such a behaviour was highly discouraged in China, dunking skills were not on top of the agenda. There are claims that black players in early days of the NBA were discouraged from dunking for the same reason.

Still, none of the above is that big of an excuse for Yao being such a stiff.

Unknown said...
Any video of the Yao Airball dunk? Did he throw it across rather than down? I can't seem to find it.

I don't know what they can do with Yao, he was very good the past few years. Shelfing him for a few weeks maybe good or give him the days off during back to backs, the team is good enough to tread water w/out him.
11/12/2008 2:22 PM

Anonymous said...
I bet Yao is using that same jumping-improvement program you are.

Drake said...
I have a couple of theories why Yao keeps getting blocked.

1. Yao has never been known for his athleticism. And while I am admittedly unsure of its effects, I do believe that two or three season-ending foot injuries will sap your jumping ability, especially if you're not fully healed.

Yao has a reach of only 9'5" or 9'6". So while he can see over other centers, he can only reach over most by a couple of inches. Along with his limited athleticism and quickness, and combined with the high number of shots he takes, it's all a matter or probability telling us that he will get his shot blocked on some occasions. Granted, the players blocking him aren't all centers, but they are ridiculous athletes nevertheless.
11/12/2008 2:58 PM

Wild Yams said...
Zonker, that's pretty outdated thinking about the dunk, IMO. A dunk is a much better way to score close to the rim nowadays simply because there is so much hard contesting of shots at the rim, that if you go up to dunk it you're probably going to either dunk it or get the foul or both. However, if you go up and just lay it in you stand a better shot of getting it blocked. To say that Yao doesn't have the skill set or mentality to dunk a ball seems fishy at best. How much of a skill set does one need to hold a ball with both hands and stuff it through the rim? And mentally he just needs to think about taking it up with authority. Don't tell me he's afraid to because he doesn't want to dishonor his opponent either, because he tries to dunk it all the time, he just frequently gets it stuffed by the defense or the rim.

Anthony, the airball dunk was in the Clippers game last week. He had inside position after boxing Kaman out and went up to dunk it and just sent the ball flying over the rim instead. This prompted the Clipper announcers to spend the next several minutes talking about how it was the worst play they'd ever seen (which is saying something since they watch every Clipper game, and the airball dunk was almost a signature move during the Benoit Benjamin era).
11/12/2008 3:34 PM

kevin -- I still don't get how Zaza got away with that. He might as well have gone around the back and pulled a Pistol Pete move. Why not? The refs obviously weren't watching.

zonker -- I think it has more to do with the fact that he's slow and physically weak for his size.

anthony -- Sadly, no video is currently available. As far as I know.

drake -- Good points. And yeah, basically, he doesn't have explosive athleticism. His moves are slow and plodding.

anonymous #1 -- This is the first time I've given this solo attention, and it's because I plan to give the situation special attention as the season progresses. And geez, I post daily almost every game. How much material do you want for free?
11/12/2008 4:30 PM

Anonymous said...
Look at that picture: on the one hand, although Yao's getting his shot blocked, at least it's not a
"dunk shot"; on the other hand, why was Yao attempting a set shot from point-blank range?
11/12/2008 4:35 PM

AdamP30 said...
I have an amendment to the Mario, or possibly an addition. Our dear friend has become a quarter-ending specialist, playing the last 10 seconds of the first, 17 seconds of the second, and a whopping 28 (!) to finish off the third. I think a new kind of Mario should be named for someone playing less than 30 seconds to end a quarter. A Baby Mario? Mini-Mario? I'm open to suggestions.

Also a WotN nomination for Boston Celtics announcers. These guys make me want to puke, the homerism is through the roof. We're into the 4th quarter and Boston has yet to commit a foul if you asked these two clowns.
11/12/2008 8:42 PM

lordhenry said...
And things will only get worse for jedi knight Ming after Lord Mamba's application of the death touch during the blocked shot on Sunday.
11/12/2008 9:13 PM

Anonymous said...
ha ha
just heard the trillion mentioned by the commentators of the magic @ thunder game. in reference to a semi-pro look-alike guy on the thunder who just scored a basket:

- nice to get your name in the scorebox
- yeah, no trillions tonight

Mintz... said...
totally unrelated to this post.. but had to be commented on: Dwight Howard had a real MAN-type triple double tonight. go check out the magic - OKC box score.

Anonymous said...
in your worst of the night post make sure u put "the hornets not named chris paul"

Anonymous said...
in response to zonker, i believe i read somewhere during yao's rookie season that he didn't like dunking on people because it was disrespectful to the person. so, yeah, you're right about the whole culture and mentality thing. but i don't think getting his dunks blocked by the rim is part of the culture there, though.
oh, and does anybody know what yao's vertical leap is? i'm guessing it's around 2-3 inches...
11/13/2008 2:48 AM

Anonymous said...
On the Yao Watch: Ming had 3 shots blocked last night - on 14 FGA, (all blocks by Shaq, btw, none by the rim) including 2 eleven-footers and a layup.
On the bright side, he was able to dunk twice and retributed with two blocks on Amare Stoudemire.
Then again, he's still moving like wearing concrete shoes. Is Yao really 8 years younger, 15 pounds lighter then Shaq? They looked the same even in the box score.
11/13/2008 7:22 AM

"Antoine Walker is the Stephon Marbury of the South."

Barry said...
I haven't seen Yao off the ground yet, so who knows what his vertical leap is?

My guess is because he's so tall, he never had to jump to get anything. Perhaps he'll surprise us all next game do that Michael Jordan-Space Jam-dunk type of thing.
11/13/2008 10:53 AM

Wild Yams said...
This deserves a nomination for the WOTN, or should be this site's motto or something:

Anonymous said...
"Going into this season, most people had Yao pegged as the best center in the league."

Had they all forgotten the Dwight Howard exists? Seriously, how could you figure that Yao was going to be better than a young, huge, high-flying center who outplayed Yao last year, and has nowhere to go but up?
11/16/2008 10:22 PM
Post a Comment
<< Home
Subscribe
RSS Feed
Mailing List