Steve Nash isn't the only pale-faced former MVP to be immortalized in the NBA's collectible bobblepop lack-tion figure series. Dirk Nowitzki has also received the glorious "bobble and lollipop" treatment. Or should I say "Dirk Nowitzki"? 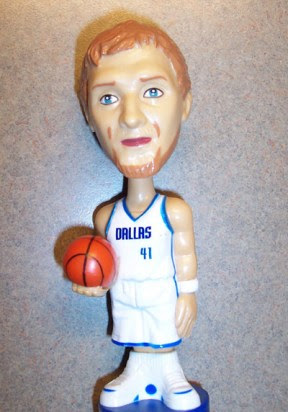 I already know what you're thinking, and the answer is: Yes! The Dirk doll also transforms into a savory yet unmistakably phallic lollipop that emerges seductively from Herr Nowitzki's man region. My funny bone was once again tickled by the fact that the doll's shorts have to come off to reveal the hidden candy inside. A case of art imitating life...or life imitating art? 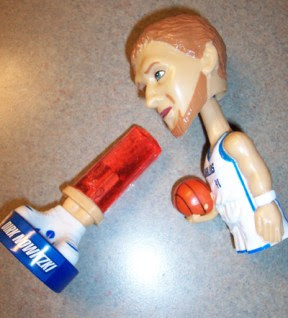 Much like the Nash doll, Dirk's doppleganger doesn't really look all that much like The Flying Dutchman. I mean, look at it. The designers obviously didn't know how to handle Dirk's Teen Wolf-like facial hair, so they just drew on a goatee and added a stripe on either side of his mouth. That combined with what I've been told is a neanderthal-like protruding brow make the doll look less like Dirk and more like a Geico caveman. Think I'm wrong? You be the judge. 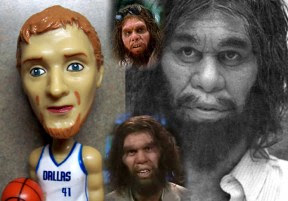 Basketbawful said...
lechuck -- Rik is indeed the DUNKING Dutchman. Or was. Now he's the Motocross Dutchman. Or the "Too Good To Show Up For Reggie Miller's Retirement Ceremony" Dutchman. Take your pick.
4/08/2008 11:44 AM

Dirk looks like a caveman in real life, actually. He has a heavy brow and wild hair all over. I think he'd clean up well but he's kinda scary looking at present. He has that whole "You gonna get raped" look about him.
4/08/2008 12:36 PM

Justin Tenuto said...
Life is so cruel. First, you lay a giant turd as the one seed in the playoffs, then they make you look like a bad transvestite on your bobblehead. And yes, there are good transvestites. Wonderful, wonderful transvestites.
4/08/2008 3:19 PM

Wild Yams said...
What is with the lipstick and eyeliner look that they give these bobblepop dolls?

For me the feature that always stands out about Dirk is his teeth. He's got these giant, perfectly straight, gleaming white teeth, that he zealously guards with his mouthpiece (which he is constantly taking in and out of his mouth). Shame that couldn't be worked into this particular product in some way. Better to go with the lipstick I guess.
4/08/2008 3:25 PM

Anonymous said...
I found the Kobe Bryant and Allen Iverson BobblePops at Blockbuster and they look great. I think the white guys are the odd ones out.
4/08/2008 5:33 PM