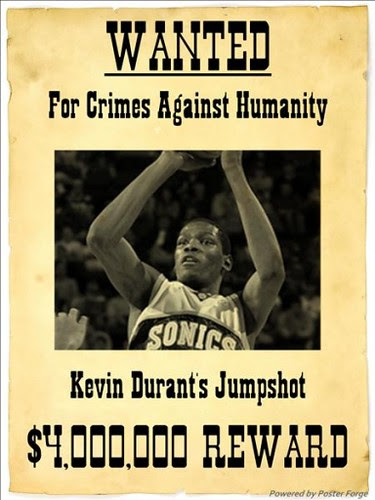 Kevin Durant: Hey, have we mentioned this kid is long yet? Well, he is. Like, really long. Unfortunately, "impressive length" does not necessarily equate to "good shooting percentage." Or even "mediocre shooting percentage." Or hell, even "bad but improving shooting percentage." Durant had the worst game of his rookie season last night, scoring 10 points (4-13), grabbing a single, lonely rebound, dishing out zero assists, and committing 4 turnovers. Through eight games, he's shooting an Adam Morrison-like 38 percent from the field. That's your 2007-08 Rookie of the Year, folks! Rashard Lewis was obviously inspired by his matchup with the hotshot rookie who replaced him, scoring 22 points on 9-15 shooting -- including 4-8 from downtown -- and almost matching his season high by grabbing 6 rebounds.

Jamaal Tinsley: By the numbers, Tinsley had an above average game -- 14 points (5-12), 4 rebounds, and 8 assists. But late in the second quarter, with the game tied at 38, Tinsley jammed a stick into the hornets nest by committing a hard foul on Paul Pierce. The Truth then dropped 13 points on the Pacers in about three minutes, en route to a 31 point, 11 rebound, 6 assist performance. Needless to say, the Celtics won in another blowout, 101-86.

Doc Rivers: The Celtics average margin of victory this season is 16 points. They've only played in one game that wasn't a blowout. Yet Pierce, Kevin Garnett, and Ray Allen are all playing around 40 minutes a game. What?! The same thing happened in last night's blowout of the Pacers: Pierce played 41, Allen played 40, and Garnett played 39. This is not a good thing for the Celtics, and if it continues, it's going to haunt them in the playoffs. More on this to come.

The Miami Heat: Just when you think they've finally hit rock bottom, the Heat find new and inventive ways to suck. Last night, they got blown out by the Bobcats, 91-76 -- and Miami had to outscore Charlotte 29-20 in the fourth quarter just to get that close. Did these guys really win the 2006 NBA title? There were plenty of culprits: Penny Hardaway scored zero points in 19 minutes of action, Ricky Davis and Jason Williams combined to shoot 5-21, and Smush Parker was just there. Shaq, on the other hand, had one of his best games of the season: 17 points (7-14), 6 rebounds, zero assists. Oh how the mighty have fallen. Edit: How bad have things gotten for the Heat? Pat Riley not only thinks he could do better than most of his players, he's saying it out loud. To the press. "I guarantee you I should suit up," Riley said. "I'd play better than some of them right now. I guarantee it. I swear to God. With an old hip and 62 years old and I can't see, I'll play better than some of my guys tonight. Come on, they were pretty bad."

Rick Adelman: The Houston Rockets suffered a tough 105-99 road loss to the Memphis Grizzlies. Yao Ming scored 22 points on 7-12 shooting. Mike James scored 10 points on 4-12 shooting. Yao is shooting 55 percent on the season. James is shooting 34 percent. So why in the name of Lincoln's Wart is Mike James getting as many shots as Yao Ming? Shame on you, Rick Adelman.

Tim Duncan: Earlier this week, I gave a friend what I thought was solid fantasy league advice: Do not trade Tim Duncan for Tracy McGrady. So of course McGrady immediately goes off for 41 points (16-28), 4 rebounds, 4 assists, 1 turnover, and 2 steals on the same night Duncan was sucking his way to 5 points (2-13), 5 rebounds, 4 assists, 4 turnovers, and 3 blocks. Thanks for making me look like an idiot, Tim. On the bright side, the Spurs blew out the Lakers 107-92 despite Duncan's crappy night, and Kobe was held to 18 points on 9-19 shooting. I might have screwed over a friend, but the Lakers lost and looked bad doing it. So, you know, everything worked out for the best. Random Tony Parker Note: TP had a season-high 9 assists last night. He averaged 5.5 APG last season -- which was "good" for 13th in the league behind Earl Watson -- and he had only five games in which he dished out 10 or more assists. Look, maybe I'm just nitpicking here, because Tony's a two-time All-Star and last season's (gak) Finals MVP, but his mediocre playmaking skills just bug me.

Dallas / Philidelphia: It's games like this that serve as Exhibit A in the case of "The NBA season is too damn long and includes too many meaningless games."

Starbury / Isiah / Knicks: Stephon Marbury bailed on his team right before a big road game against the Suns, supposedly because Isiah Thomas was going to yank him from the starting lineup in favor of second-year gaurd Mardy Collins. Starbury blew up on the team plane and reportedly said, "Isiah has to start me. I've got so much (stuff) on Isiah and he knows it. He thinks he can (get) me. But I'll (get) him first. You have no idea what I know." Thomas of course shed absolutely no light on the subject by saying, "That is an in-house matter and we will continue to keep it in-house. Make no mistake about it - we do want him as a member of this basketball team. He is welcomed back." In the midst of all this dysfunction, the Knicks lost to the Suns 113-102 despite the fact that Steve Nash scored a season-low 5 points on 2-6 shooting. How does Isiah still have a job with the Knicks? No, seriously, how?

Detroit Pistons: Somebody forgot to show the Trailblazers that memo explaining that their season was over before it began because of the Greg Oden injury. Portland's offense took a huge, steaming dump all over Detroit's defense (if you could even call it that): The Blazers shot 55 percent as a team, thanks to scorching performances from LaMarcus Aldridge (9-16), Brandon Roy (9-16), Jarret Jack (7-10), and our boy Joel Przybilla (3-3). Look, kudos to the Blazers. They played great, and I am very excited about this team. But talented, veteran teams like the Pistons should never let an opposing team shoot 55 percent against them. That's the kind of loss of focus that got them booted out of the playoffs the last couple years.

Anonymous said...
There appears to be a misprint in this post. On the part where you were talking about Tim Duncan you wrote "...is sucking his way" when you obviously meant to write "...is the greatest person ever and gives me a total hard on".

p.s. If you ever say anything negative about Timothy Theodore Duncan again I will punch you right in the face, hard.

Going with misprints, I think you meant to say "Look, maybe I'm just nitpicking here, because Tony is riding his wife to fame harder than KFED rode Britany, but the fact that he would be Anthony Parker on any other team just bugs me..."
11/14/2007 2:47 PM

Basketbawful said...
liston -- Hey, I'm not trying to feathers ruffle, I'm just here to do the Superbowl Shuffle. Anyway, look, I love TD. He's like Superman in the old Super Friends cartoon. I mean, we all know that Superman doesn't need help from losers like Hawkman and Apache Chief. He can do anything they can do, and he can do it at the speed of light. Hell, if he's in a really cranky mood, he might just reverse time by flying around the Earth and solve the problem before it even happens.

That's TD. Tony Parker is Black Vulcan and Manu Ginobili is Aquaman. Duncan lets them take the lead when the stakes are relatively low, but you know he's going to come out gangbusters when he needs to, kind of like how Superman always shows up in time to stop Lex Luthor's giant, planet-eating Pacman robots.

Now, all that said, Tim's numbers were awful last night. Leadership and untapped ability means nothing -- I repeat, nothing -- in fantasy basketball.

flohtingpoint -- I couldn't have said it better myself. Look, TP isn't a point guard, he's a shooting guard in a point guards itty-bitty body. I wonder how Eva feels knowing that she married one of the smallest men in his chosen profession. I guess size really doesn't matter to a bitchy man-eater like her.
11/14/2007 3:32 PM

Anonymous said...
Get off TP's back everybody! Tim Duncan's great but can he do this?

Oh, and I'd appreciate it if you could figure out a way to write with a French accent whenever speaking of Tony Parker--just to remind us all that it's not just his playmaking skills that are really, really funny.

bob said...
Because he's Mr Longoria and every time he gets beaten on D, Tim Duncan is usually around to save his skin.

Lawls at Starbury. I've been telling everyone who would listen that he should go to Italy and take his 60 shots a game. I need David Lee to take more shots for my fantasy team, he's one of the few players on the Knicks team with a Basketball IQ higher than 10.
11/15/2007 12:45 AM
Post a Comment
<< Home
Subscribe
RSS Feed
Mailing List