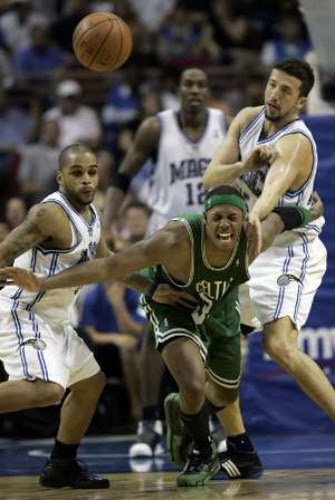 Detroit Pistons: The Pistons went 0-for-the-weekend after losing back-to-back games against the Lakers and Kings. That means Detroit has lost three of their last four games. Why? Simple: They've lost their defensive focus. After holding their first five opponents to 87.8 PPG, the Pistons have given up scores of 103, 102, 104, 103, and 105 to their last five opponents -- and that's including games against Seattle (99.4 PPG), Portland (93.7 PPG), and Sacramento (99.4). I'm not a mathematologist, but even I know that a team averaging just under 100 PPG can't give up more than that and win on a consistent basis.

New York Knicks: Speaking of teams that went o-for-the-weekend and can't play defense, the Knicks gave up 238 points in back-to-back losses to the Kings and Nuggets. The Knicks defense was so bad that even Allen Iverson shot better than 50 percent against them (7-13). New York now has a nice six-game losing streak going -- tops in the NBA!

Portland Trailblazers: After two exciting, hope-lifting wins against Dallas and Detroit, the Blazers have lost three in a row, including both weekend games against the 76ers (3-6) and Wizards (4-5). They're a young team, and all three losses were on the road, but that doesn't change the fact that they just didn't play well and are currently 0-6 away from home this season.

Utah Jazz: Yet another 0-for-the-weekend team. And while I can sort of understand Friday Night's 99-94 loss to the Cavaliers -- Lebron James blitzkrieged the Jazz with a 40/10/9 performance -- Saturday night's 117-97 loss to the Pacers was totally unforgivable. Utah played the role of Jesus to the Pacers' Lazarus, resurrecting both Mike Dunleavy Jr. (25 points), Jamaal Tinsley (13 assists), and a team that had lost six straight games. Oh, and the Jazz let the Pacers shoot 58 percent. Man, the Pacers couldn't shoot 58 percent in an empty gym full of Nerf hoops.

Houston Rockets: They also went 0-for-the-weekend and are stuck in a four-game losing streak. Mind you, Tracy McGrady has missed the last two-and-a-half games with his annual semi-serious injury, and the Rockets lost three of the four to hot teams (Lakers, Spurs, and Suns). But still, the Rockets have been losing and looking bad while doing so. The only bright spot has been the play of their 40-year-old rookie, Luis Scola. Speaking of which...

Doubters: Some people have been wondering whether Luis Scola is going to be an NBA bust. Scola responded to this criticism (of which I'm sure he was completely unaware) with two very good games: 20 points (10-11), and 4 rebounds against the Spurs, and 20 points (10-19), 11 rebounds, and 4 assists against the Suns. He also was Houston's best player in both games. Not bad.

Rashard Lewis: I know I'm always ragging on Rashard for his poor rebounding skills, but seriously, he deserves it. He's an athletic, 6'10" forward and he got outrebounded 24-7 by opposing point guards this weekend. That's just sad.

Los Angeles Clippers: The Clips teased us all by starting the season 5-2 and then lost consecutive games to the Warriors (2-6) and Bulls (2-7). Yep: They are who we thought they were.

Kevin Durant: The kid shot 3-12 in the Soncis' 100-84 loss to the Bobcats. But I'm used to his sour shooting by now. What really concerned me was the fact that he had only one rebound. Maybe it's only a coincidence, but Seattle got pounded on the boards, 60-38. I know Durant is thin, but he's tall and athletic enough to grab more than one rebound in 30 minutes of action. I mean, according to the box score Jermareo Davidson played exactly zero minutes and even he had one rebound. Rebounding is all about effort, Kevin. Let's see some.

Luol Deng: The Bulls crappy offense got even crappier in the second half of their 106-78 loss to the Lakers, and I found myself thinking, "Boy, they could sure use Luol Deng right about now." Unfortunately, Deng sat out with what he's desribing as a "bruised ligament" in his back. A whatted what? You can bruise a ligament? I'm not a doctor, but it sounds to me like he has a case of Big Vaginaitis. You know, Larry Bird used to suffer back pain so bad that he couldn't feel his legs or even wiggle his toes. Sometimes he'd have to go to the hospital and be put in traction between games. Do you think that Bird would have abandoned his team, especially if it had been struggling as bad as the Bulls have been, with a "bruised ligament"? Yeah, me either. But the Bulls wouldn't trade Deng for Kobe. I'm just sayin'.

Boston Celtics: The C's lost more games this weekend than they had lost all season. Okay, it was only one game, but still. Anyway, their 104-102 loss to the Magic raises an interesting question: How does a team shoot 53 percent and outrebound their opponent 41-28 and still lose? Hmm, I would guess that Orlando's 44 freethrow attempts (to Boston's 26) had a little something to do with that. Mmmmm...smells like a little home cookin' to me. Of course, the Celtics kind of shot themselves in the foot a little bit too, committing 19 turnovers and falling into a 20-point hole in the first half. And Pierce's last-second shot, an off-balance jumper from 26 feet, was that really the best shot the Celtics could have gotten?

Anonymous said...
Unfortunately for the last comment, the Celtics got most of the calls in their favor last night. I mean, when Dwight Howard gets one technical and almost gets a second, you know something's happening. The officials had absolutely no control over the game, and although Howard shot a lot of free throws, they could have easily been doubled.
11/19/2007 11:23 AM

Basketbawful said...
flohtingpoint -- You're absolutely right. I didn't quite have the time to crosscheck all the home cooking that probably went on, but I did check Wade's game log and I see that in three games he's gotten 8, 12, and 20 FTAs. So, you know, he's worked himself into midseason form.
11/19/2007 11:27 AM

Basketbawful said...
anonymous -- Wait, you're saying Howard could have gotten 40 FTAs? Also, it's hard to believe that the Celtics got "most of the calls in their favor" when the committed 12 more personals and 18 more FTAs. Also, Dwight Howard getting a tech doesn't really mean anything; it's not like that was the first technical of Howard's career. KG also got a tech, so does that mean something was happening against the C's? I mean, Garnett got zero freethrows. Do you think that was accurate. I watched the game, and I think KG probably should have gone to the line a couple times...
11/19/2007 11:42 AM

Anonymous said...
The Pistons' losses were welcomed by my, a Pistons fan. First of all I'd like to point out that Billups was out for two games this road trip, and McDyess for three. When one of your best interior defenders is out, your defense tends to suffer. Not to mention the Pistons tried doing something they never have done in the history of the franchise, they played the bench. The fact that they were willing to suffer some growing pains in order to give their young players expirience is a good sign to me. Not to mention Rodney Stuckey has yet to suit up this season. I'd also like to point out that Jason Maxiell had 14points and 14 rebounds and a few blocks in his start against Golden State. When he stays out of foul trouble he can be a force.
11/19/2007 12:53 PM

Basketbawful said...
anonymous Pistons fan -- It's true that Billups was missing for the Lakers game, but he was there for the Kings game...and that was a game the Pistons should have won with or without him.

McDyess is an above-average interior defender, but the Pistons' best? I dunno. I would put Maxiell and even Rasheed Wallace above McDyess. Maxiell is a better shot blocker -- 1.6 BPG to McDyess' 0.1 -- although I'll admit that McDyess does a better job of establishing body position and boxing out. At any rate, I've never been that impressed with McDyess as a defender. And his defensive rating (on basketball-reference.com) has never been that special; the league's best defenders regularly score in the 90s and even 80s, whereas McDyess is usually in the low 100s. (defensive rating measures the amount of points a player gives up per 100 possessions).

At any rate, forget the numbers. I watched Lakers and Kings games, and their first loss against the Bulls, and the Pistons aren't as focused on the defensive end as they have been. Yeah, they've had some injury problems, but what team doesn't? The defensive intensity and focus I'm used to from the Pistons hasn't been there, IMHO. But it's an 82-game grind, and, as you say, the Pistons are trying to develop their bench. It bears watching, anyway.
11/19/2007 1:17 PM

Erik said...
Just want to help you with your New Testament. Jesus resurrected Lazarus, so Utah actually was Jesus in your analogy.

It was probably Touchdown Jesus on a visit downstate. He's obviously been on vacation from Notre Dame.
11/19/2007 3:00 PM

Basketbawful said...
erik -- Bible-ology was never my specialty. However, I have updated the post accordingly; thanks for the fact checking.
11/19/2007 3:37 PM

Anonymous said...
'vaginaitis'!!! everyone stop what you're doing, and give this man your vote for blogger of the year

Anonymous said...
Just wanted to let you know your blog is hilarious! Agree with your comment about Durant. I think he's overrated at the moment, although to be fair on the Morrison comparison, Durant has hit a game winner already. Yes he might become special but definitely not at the moment. I can't believe how upset some people were when 'the leader' nominated Yi over Durant - its too early to be impressed by any rookie!
11/21/2007 4:10 AM
Post a Comment
<< Home
Subscribe
RSS Feed
Mailing List

Word of the Day
Previous Posts
Darko. Nipples. Scary.
Gay jokes? Bad. Freudian slips? Awesome.
Worst of the Night: November 14, 2007
Worst of the Night: November 13, 2007
"Pump up and air out" with Bill Walton
Notes on a Game: Bulls-Raptors
Word of the Day: revenge game
Random thoughts on Wednesday's NBA action
Nobody's perfect...not even Michael Jordan
The truth about The Truth?