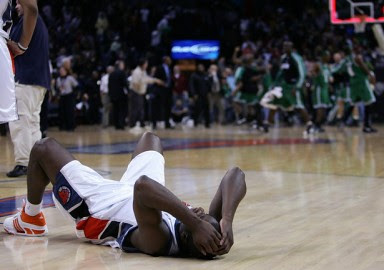 To be a Bobcat is to be unhappy.
Chicago Bulls: The good news: The Bulls ended an eight-game losing streak this weekend. The bad news: It was the Knicks' losing streak, not theirs. What a travesty. According to the NBA.com box score, the only Bulls player with a positive +/- score was Chris Duhon (+4). Ben Gordan and Joe Smith tied for a team-worst +/- score of –12. On the other side, Stephon Marbury led the Knicks with a +/- score of +10. I don't necessarily understand these stats, but I'm pretty sure they mean the Bulls suck. Anyway, the Bulls followed up that sucktastic performance with a 93-78 loss to the Raptors in which they scored a season-low 14 points in the fourth quarter. The Bulls quote of the weekend comes from Ben Wallace, the team's high-paid but under-performing center: "We've just got to find a way out [of losing]. We better or I'm going to lose my daggone mind."

Dallas Mavericks: Like the Bulls, the Mavs went 0-for-the-weekend, thanks to stinktacular losses to the Pacers and Bucks. Against the Pacers, Devin Harris, Dirk Nowitzki, and Jason Terry combined to shoot 15-40. That trio shot better against the Bucks, but the team continued its disturbing trend of going down by double-digits and then trying to rally back at the end of the game. It didn't happen, though; they lost 97-95. But here’s what’s interesting: Take a look at results of the six offensive possessions the Mavs had in the final minute of the game.

So the reigning league MVP gets one shot in crunch time, but the team's sixth man gets five? Seriously? That either says something about Avery Johnson as a coach or Dirk Nowitzki as a player, and neither is a good thing.

Los Angeles Lakers: The 7-3 Lakers sure looked a lot better than the 7-6 Lakers. Just when it looked L.A. might have established a team identity, they lose three in a row and go 0-for-the-weekend against the Celtics and Nets. The near future doesn't get any brighter for the Lakers; they get a gimme game against the Sonics, but then they have to face the Nuggets, Jazz, and Magic. In other words, the Lakers' record will probably fall below .500 by next week.

Minnesota Timberwolves: Let's see: 0-for-the-weekend, 1-10 for the season, and Antoine "Fatty" Walker -- 24 points (9-17), 5 rebounds, 3 assists -- was their top performer against the Nuggets. It's a good thing that Kevin McHale looks like Frankenstein's monster. That way, it won't look that strange when the people of Minneapolis run him out of town with pitchforks and torches.

Fun fact: The Kings, Knicks, Timberwolves, and Trailblazers are a combined 0-24 on the road.

Washington Wizards: I knew Gilbert Arenas the Wizards' best and most important player, but I didn’t know he was their lynchpin on defense. The Wiz gave up 123 and 124 points in back-to-back losses to the Warriors and Grizzlies. The Warriors shot 51 percent and the Grizzlies shot 52 percent. The Wizards were never good on defense, but they weren't that bad were they? From this point forward, I shall refer to them as the Washington Wizars: No "d."

Fun fact: Against the Grizzlies, Antawn Jamison scored 41 points (18-22). But he had zero assists. On the weekend, he took 41 shots and dished one lonely assist.

Jason Richardson: The Bobcats came within 4.7 seconds of beating the Celtics on Saturday, but Richardson couldn't do something as simple as inbounding the ball. Eddie House knocked away Richardson's errant pass and Ray Allen -- who had missed 11 of his last 14 shots -- hit a three-pointer at the buzzer to add another chapter to the Bobcats' misery. After the game, Richardson had this to say: "We handed them the game. Stupid turnover on my behalf. I lost this game for my teammates." Pretty much, yeah.

Mike Dunleavy: In the Clippers' Friday night game against the Suns, Sam Cassell single-handedly kept his team in the game by scoring 26 points (9-16) through three quarters. Then Dunleavy took Cassell out and never put him back in. As a sidenote, the Suns won going away, 113-94. Said Dunleavy: "[Cassell] played great, but when they jumped out on us, we play tomorrow night in back-to-back games, I just felt like I didn't want to take any more of his legs." So you "saved" Cassell's legs for a 10-point (3-10), 5 turnover performance in a 98-89 loss to the Hornets? Good call, coach.

Pat Riley: Riles got his coaching ass politely handed to him by Stan Van Gundy, the man he stabbed in the back, as the Magic blasted the Heat 120-99. The season standings? Orlando is 12-3, the Heat are 3-10.

Marcus Banks: Remember a couple years ago when the Suns signed Marcus Banks to a five-year, $21 million contract? Man, they were excited about that. David Griffin, the Suns' vice president of basketball operations, said, "Every facet of his game is improved, and at 24 years of age, we feel like he's just starting to scratch the surface of what he can do in terms of his talent level, and his fit with our system is just spectacular." Uh huh. Banks is playing 11 MPG and averaging just over 4 PPG. His stat line for the weekend: 4 minutes, 2 personal fouls.

Kevin Durant: Friday night, he scored 12 points on 4-12 shooting. Sunday night, he had what might have been his best game of the season -- 25 points (11-17), 6 rebounds, and 4 assists -- but the Sonics still got blown out by the Spurs. Sometimes you can't win for losing, or can't lose for winning. Or whatever.

Kobe Bryant: While some people will look at his final line (31 points, 3 rebounds, 7 assists) and insist that he had a good game against the Nets, he really didn't. He started out 3-16 from before finishing 7-21, didn't score a basket in the second and third quarters, and missed a clutch freethrow with six seconds left in the game. In the end, the Lakers coughed up a 102-100 home loss to the Nets. But it wasn't all Kobe's fault. You can also blame...

Vladimir Radmanovic: How bad was Vlad the Impaler against the Nets? Try 0-10 from the field, including 0-7 from beyond the arc. He also missed one of his two freethrows and committed three turnovers.

Sturla said...
Wasn't Fatoine Walker supposed to be completly washed up, a has-been, a dead man walking etc etc? And a fatass to? At least that was what Riley said. But seriously, in the last six games he´s averaged 15,3 points and 4,7 reb on 48% in two's and 50%!! in three's! Thats better numbers than his substitude, Ricky Davis, has. Plus Walker has been the good soldier the whole time, being positve and all that crap. Last time I checked Ricky Davis was still an asshole.

Unknown said...
Wasn't Fatoine Walker supposed to be completly washed up, a has-been, a dead man walking etc etc? And a fatass to? At least that was what Riley said. But seriously, in the last six games he´s averaged 15,3 points and 4,7 reb on 48% in two's and 50%!! in three's!

Do you hear that clicking noise? Yeah, that one....its the Sun's chemistry...we are about to rattle off 19 in a row....of the next 13 games, we play Spurs and Mav's 12th and 13th with NO ONE in between, except maybe Utah, but that still should be a win.

Anonymous said...
"It's a good thing that Kevin McHale looks like Frankenstein's monster. That way, it won't look that strange when the people of Minneapolis run him out of town with pitchforks and torches."

Basketbawful said...
chrish -- You just made a grown man (me) cry. Are you happy with yourself?

sturla -- Antoine is playing approximately as good as Ricky Davis right now, BUT...I would guess he's auditioning for a trade to a title contender. It's his "See, I'm still useful!" tour.

starang -- You just had to go and stat curse the Suns, didn't you? You just had to do it. Don't you realize how powerful the stat curse is? I needed big fantasy points from the Pittsburgh game, and expected them, to the point I was talking all sorts of trash in my fantasy league. My stat curse was so powerful it obliterated the Steelers' field! Don't tempt fate, my friend.