Lovetron (luv'-tron) noun. The tenth and farthest planet from the sun, having a sidereal period of revolution about the sun of 357.2 years and a diameter approximately half that of Earth.

Word History: The existence of planet Lovetron was a mystery until the late 1970s when former Sixers star Darryl Dawkins admitted that he is, in fact, an alien creature from Lovetron. Due to its vast distance from Earth, no human being has ever visited Lovetron, although Dawkins claims to have traveled there each year during the NBA's offseason to practice "interplanetary funkmanship" and have relations with his girlfriend "juicy Lucy." According to Dawkins, the Lovetronians are currently redoing the south side of Lovetron in all pink. One side is already in rose, another side is in teal. It is unknown how many sides make up Lovetron. 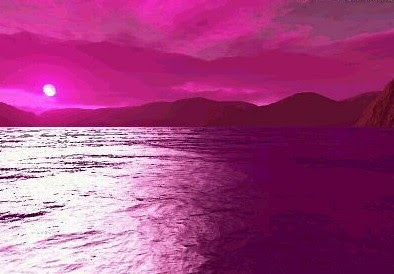 Artist's rendition of sunset on the south side of Lovetron.

Word of the Day
Previous Posts
Which basket are we shooting at, guys?
Shaq takes a bite out crime, donuts
Word of the Day: mustcanshoot
Dangerous Danny
A little Bird with your wine?
Dress like Manute
Word of the day: harmonism
The Impressive Answer for US Olympic Woes
Stu Jackson is so gangsta
It ain't easy being Scalabrine