Well, we all saw the ignominious travesty that was game 2 of the Eastern Conference Finals - the no-call on Rondo's face, the D Wade MMA kick to KG's nuts, the general travesty that has always been NBA officiating. But trying to write a full-fledged post about it would just make me sound like a resentful, angry douche. Fortunately, Wally Szczerbiak and his Twitter account are around to 1.) show that he's an even bigger douche than I could hope to be 2.) take my mind off the crushing loss 3.) Make me realize why I shouldn't feel sorry for any of the current Celtics, because there are still sad, sorry souls like Wally S (I can't write that abominable last name again) who just wish they could have, at any point, been as good as KG. Anyway, I figured it would be fun to poke back at Wally, because one turn of petty antagonizing deserves another. Add your own gem to the comment string and I'll put the best ones on my Twitter feed. On to Game 3 tonight, where hopefully the home-cookin can be as one-sided as it was in Game 2. (P.S.> save your insults - you know I'm from Boston. I'm SUPPOSED to feel this way). Anyway, enjoy the tweets, and go Celtics! 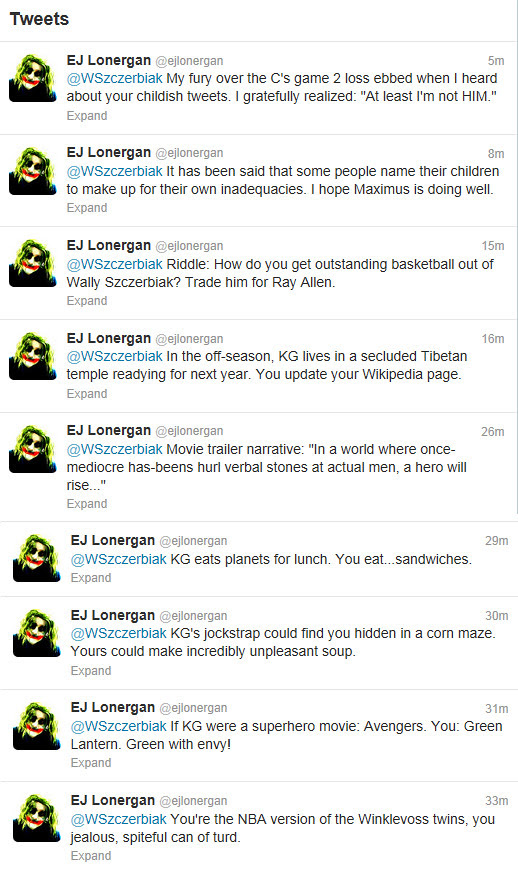 Czernobog said...
"If you were half the man KG is, you'd be roughly a quarter of the man Duncan is."

Honestly, I can't get wound up about someone insulting Garnett. The guy is King Dickweed.

How about "We all know Wally isn't man enough to get in a scuffle with Jose Calderon on-court, so he tweets about KG."

Naz said...
Lebron had a phenomenal game in Game 3 even though the Heat lost


This shit is getting nuts, Dwyane Wade is the luckiest player in the league. Almost all of his bad games and bullshit mistakes are glossed over because the only person ever responsible for the Heat losing is Lebron James

Barry said...
TeamD: You'd insult a man to his face like that?

kazam92 said...
While I agree Wally's comments were stupid (but hilarious because fuck KG), not a fan of flooding his mentions with insults. The fact is, people are talking about Wally freaking Sczerbiak again.
6/02/2012 11:28 AM

Anthony Peeler said...
criticize the messenger if you must...but don't act like Szerbiak is wrong. I lived in Minny for most of KGs career, he rarely came up big when needed.
6/02/2012 12:13 PM

Anonymous said...
If KG is the Avengers and Wally is Green Lantern, you're a guy posting comments on YouTube.

Naz said...
Thunder take both their games at home, I'm going to stick with what I said before the series started and say that San Antonio takes it in 7 and the team playing at home wins the game, so game 7 in San Antonio sends the Spurs to the Finals
6/03/2012 12:07 AM

- The post isn't a defense of KG's personality, just an indictment of WS, a past player of no particular consequence, who fancies himself some sort of commentator these days, making such an infantile comment through a social media outlet designed for malcontents, self-centered people, and those with attention deficit disorder (I fall under all three categories, btw).

- The post is mainly satirical and glib. When people don't get that, they will find themselves not only insulting me, but defending Wally Szczerbiak. Lighten. Up. People!

- kazam - "flooding his mentions"??? Have you ever been on Twitter? Wally Szczerbiak has 8,890 followers, and is currently following 250 people. If my 10 jokes (which are in part making fun of of the giant social clusterfuck that is Twitter - see above) manage to get on Wally Szczerbiak's radar, then his life is actually far sadder than I purport it to be.

- Naz - Who is McGrooth indeed? And why does he think we care?
And I would agree with you that home court seems to be weighing heavy in this series, so I give the edge to the Spurs. Unless they manage to blow game 5. If they do, it's over, just as it will be for the Celts if they drop game 4.

Raza said...
Man, I always felt Spurs would win in 6, but the Spurs can't allow the Thunder bigs to combine for 22-25 from the floor. Despite all that they only lost by 6, but eventually you're going to run out of excuses with those type of stats.

Passives Abseits said...
just caught myself screaming at the referees: "BE CONSISTENT!" and surprisingly they where... fouling out Paul and LeBron on cheap offensive fouls..
6/03/2012 11:03 PM

Evil Ted said...
Yes, consistently bad. Honestly, I was just plain confused by the officiating in this game (did I see Crawford out there? That might explain it)...the double foul of LeBron and KG (that was all KG with the throwdown)...no call on Wade's takedown of Pierce...the traveling call on KG...it was bad all around, both sides...and as far as Rondo saying in the halftime interview: "they're crying to officials in transition," I'm not sure why he wants to poke at a bear, and I'm fairly certain both teams, rightfully, have been griping at officials...

...on the other hand, Rondo did say "in transition," meaning the C's took advantage in the fast break of the Heat essentially being distracted, but the way he phrased it needlessly makes the comment bulletin board material.

Naz said...
I just think Rondo is frustrated because he is not only fed up with every referee in the NBA but he knows that even if he beats the Heat here in the ECF that when the Celtics go to the Finals they're going to be DESTROYED by either OKC or the Spurs


The Celtics are a baaaaad matchup against San Antonio and OKC, either one of those teams would ruin the Celtics. The Heat have a better chance, but still a slim one. Ever since the Spurs went up 3 and 0 against the Clippers and the Heat and Celtics were struggling I had a feeling that the West is winning this year, especially if it's SA going to the Finals.
6/03/2012 11:48 PM

Such I lousy game that I don't really want to watch anymore. The WCFs has been good, clean fun with few bad calls. The ECFs have been a clusterf**k of abysmal officiating. Either the NBA is trying to engineer the goddamn series or they have the worst officials imaginable and are steering the worst to the ECFs because people expect it to be an ugly defense fest anyway.

vaanhalen said...
I don't want to bandwagon, but the post seemed a little "off" to me, too. I understand the "twitter is a joke" angle, full of tools and humblebrag. But giving my genuine response, EvilTed's comment defense sounds a whole lot like the jealous friend of a dude's girlfriend who says mean cutting inappropriate things, then says "just kidding!" to get away with it. Not a perfect analogy but you get the point... Point being, it's still an excessive thing to say, and nobody believes you when you say "just kidding".

I agree that wally is slightly douchie, and I was with you in calling him a dick for taking jealous potshots @ KG, but everything you said was mostly mean and not funny, plus you borderline went after his family. That was *infinitely worse* than everything wally said, and that's why people are giving you so much crap about it even though you were only making a "joke".
6/04/2012 9:03 AM

vaanhalen said...
PS don't get too bent out of shape, all of america is on your side cheering for the Cs to beat Miami. As a west-coaster I don't want to wait for the spurs/OKC to have to take on Lebron, I'd rather Wade lose as fast as possible.
6/04/2012 9:07 AM

"It was like chess," Ray Allen said. "They took our queen, then we took their queen."

Evil Ted said...
VanHalen (Roth or Hagar?): I intentionally went over the top because I have no particular reverence for that which is Twitter. Never expected such enormous sympathy for Wally, given I felt it seemed obvious that I was going for satire (I do that, ask around)...

I was on the fence about mentioning his kid, but was just making fun of Wally and the name name he chose...Maximus Szczerbiak? That's awesome. I do see your point, and appreciate it. Guess I'm out of practice...

I do still love it when people actually spend time writing "that's not funny" about stuff here instead of just going on about their lives...
6/04/2012 11:06 AM

Unknown said...
Observation: Wade is becoming a bigger douche than Lebron or has King Crab learned a lick of humility? Discuss
6/05/2012 1:06 AM

Flud said...
Get Hagar to murder the national anthems at the Null Star game next year. He blows. And it should be played in Charlotte. And the Spurs mojo looks like it's gonna be starting. What the F is join' on? Twally Tweerbiak
6/05/2012 8:05 AM

Evil Ted said...
Coy - I strongly agree that LeBron is the far more likable of the two these days. Your comment inspired a Skype post I put up today, in which I addressed that very subject.