(Thanks to guest author Matt for today's writeup!) 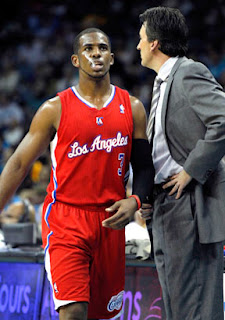 "Maybe if I ignore him, he'll go away. Forever."
Indiana Pacers:  The Best Kept Secret decided to keep their offense a secret in the first half, scoring a whopping 31 points (while letting their opponent rack up a 20 point halftime lead). The bench was a sparkling 6-for-22 from the field (1-for-6 from long distance). Of course, hope was not lost, because they had the good fortune to be playing…

…The Generals:  Who decided that they had done enough scoring in the first half and made only 11 field goals in the second. They gave up three offensive rebounds in the final minute to a guy who had dislocated a finger in the previous quarter. And, in the most General-ly way possible, they lost the game when Wall decided to put up the game-tying shot (which was successful) after the game clock had run out. Enjoy the clip here (fast-forward to the 1:27 mark) -

Fortunately, Wall was kind enough to throw his teammates under the bus, with the following quote:

"I tried to create something," Wall said, "but there wasn't enough spacing for me to create."

I'm not sure what Wall was seeing, since his teammates seemed to be running the four corners offense without the ball. Maybe if he hadn't dribbled from the foul line to 30 feet from the hoop back to foul line in the final three seconds, he might have had time to get the shot off before the buzzer.

The Clippers:  Are they becoming the team we always thought they were, but then thought they weren't, but now we think they are again? Chris Paul does understand that he doesn't still play for the Hornets, right? Maybe he should have done all the fancy handshakes and bro-hugs before the game instead of during (five personal fouls). The Clips did have a three point lead going into the fourth quarter, but then somebody messed with the rims or something, because they shot an outstanding 4-for-23 in the final quarter. Overall, they shot less than 40% from the field, less than 20% from 3-point range, and less than 65% from the line. It's like they decided to be the opposite of Steve Nash.


Sheesh, I think Smith would have been whistled for two minutes for boarding if he tried this stunt in the NHL. According to Smith, he was just trying to cut off his lane to the basket. You know, by hip-checking him from behind.

DeAndre Jordan:  With the shot clock running down, everyone knows that DeAndre Jordan is the guy you want taking the shot. Assuming, of course, that "everyone" means "the opposing team".  I may not be the best player in the world, but I can hit the rim from three feet away. Alas, that was too much to ask of Mr. Jordan. (yes, I know he hit his other seven shots, but c'mon…)

Golden State:  One game after snapping a four-game losing streak, the Tru Wariers decided there was no time like the present to start a new one. They were only down eight at the half, but were outscored 53-36 in the second half to lose going away. Outrebounded 48-31, nobody on the team had more than six rebounds. To rub salt in the wound, Samuel Dalembert had this to say after the game:

"I saw an opportunity to go in and just go out there and kill them on the boards."

When Dalembert is licking his chops at the prospect of rebounding against you, you know you've got a problem.

Chase Budinger:  0-for-7 in 26 minutes is no way to go through a game against the Warriors, son.

Milwaukee Bucks:  That crashing sound you heard was the Bucks' six game winning streak ending. Of course, since they were playing the Celtics instead of the Little Sisters of the Poor like they had been for the past half-dozen games, it wasn't that much of a surprise. Also not a surprise:  Ellis shooting 6-for-18. Hey, his position ain't "making guard".

Memphis Grizzlies:  Fighting for a playoff spot against a team that had lost eight games this month by double digits (and an average deficit of 20 points in those losses), the Care Bears lost. They did this despite having more points in the paint, more fastbreak points, more rebounds, and fewer turnovers. They just picked a bad time to let Portland make every shot (literally) from the free-throw line. C'mon, Grizzlies, you gotta put a hand in the face at all times. You can't give them that much space when they're shooting from the charity stripe!

Mormon Musicians:  They got dominated on the boards (giving up 18 and 15 to Cousins and Thompson, respectively), gave up 70 points in the paint and went only 3-for-17 from deep. Jamaal Tinsley had the Tinsley-est game ever (3-for-10 with eight assists and one turnover). Down the stretch, they went almost nine minutes without making a field goal, but escaped with a win when Devin "Playoffs" Hester airballed a shot that Jefferson gathered and put in with less than a second to play. Of course, Harris claimed that it was a pass all along. I do that in my pickup games and nobody believes me there, either.

Excremento Kings:  Of course the Kings lost this one. Despite so many stats  (12-for-21) being in their favor, I just can't figure out how they could have let this one slip away  (12-for-21).  Maybe I should take a (12-for-21) closer look at the box score. Hmmm, I wonder how they shot from the free throw line? In a one-point game. I wonder.

Keith Smart:   Assessed for a technical foul in the fourth quarter while your opponent is struggling to score. In a one-point game. That's not smart, Keith!

C'mon, even you think I'm a bust? Mom?!?
(Chris: Well, Rick Adelman says so, with the subtlety only a great coach can offer up (courtesy The Basketball Jones) -

“He’s gotten himself out of shape, and I don’t think he’s been as driven as you’d like.”

Raza said...
Haha nice write up Matt, that picture of Chris Paul and Vinny really says it all.

Naz said...
Hey Raza that's a great idea, we should definitely have a Most Bawful Player (MBP) award ceremony when the season awards are handed out.

Naz said...
Lamar Odom only took 2 shots tonight and both of them were blocked


I genuinely think that there should be some sort of acknowledgement to Lamar Odom's performance this season, that a former 6th man of the year could play as terribly as he does is astounding.
3/25/2012 12:21 AM

Anonymous said...
People are too hard on McGee. He has shown some great flashes of bawful but brings enough positives to the table to cancel that out. Hes certainly not in the bawful MVP conversation...
He's good enough to stay in the league and be productive for years to come.
My bawful MVP is Jimmer
3/25/2012 9:59 AM

o_OV said...
Did anyone catch this gem on tonight's boxscores?
http://i.imgur.com/iqFZL.jpg

Rik Smits Mullet said...
While surfing to the most urban website trying to enhance my street cred online. i stumbled on this video of the 76ers spurs boxscore before it was edited and behind Tim Duncan's stats it said DND- OLD.
check out the video this most be one of the most bawfulboxscoring ever.
http://www.worldstarhiphop.com/videos/video.php?v=wshh7l5y22SEq6Q5f71c