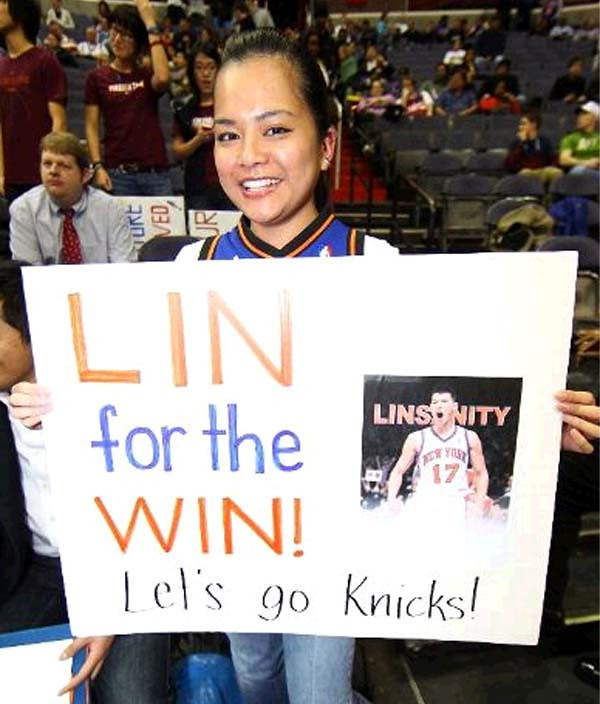 Jeremy Lin: Already more popular then 'Melo and STAT.
The Los Angeles Clippers: Oh my...it's a "they are who we thought they were" flashback! Despite strong games from Blake Griffin (25 points, 15 boards), Chris Paul (16 points, 12 assists), and Caron Butler (21 points, 8-for-15), the Clippers lost to the Kyrie Irving-less Cadavers in Cleveland.

Turns out The Other L.A. Team had no answers for "Razor" Ramon Sessions (24 points and 13 assists).

Said Chris Paul: "We came out flat. That starts with me. I couldn't make a shot (5-for-16). We didn't defend well. This is definitely one of our worst showings."

Don't worry, Chris. We here at Basketbawful understand that "bad shooting" is a genetic disorder, like baldness or necrophilia.

Anyway...it amazes me that a team with CP3 and Blake Superior could finish a game with only 2 fast break points.

But there was this:

Is it just me, or did Blake's "pass" look a lot like a bad shot attempt?

Last note: The Cadavers have now won 10 straight over the Clippers.

Ramon Sessions, quote machine: "It's not my first rodeo. I was ready to go when they called my name."

Blake Griffin, quote machine: Always ready to give credit to his opponents: "We came out with a lack of energy. That's on us. We had no urgency. We didn't play like we should. We gave the game away."

Kenyon Martin, quote machine: On getting a tech during his first game back from China: "First game back and I get $1,000 (fine). That's who I am. I can't turn it off."

The Miami cHeat: Okay then. Looks like Eddy Curry (DNP-CD) may not be Miami's answer at center after all. Ditto (still) for Joel Anthony...who finished with zero points. Meanwhile, Dwight "Trade Meeeeeee!" Howard erupted for an Animal-Style Double-Double (25 points and 24 rebounds) to go with 4 assists, 3 steals, and 2 blocked shots. He even went 7-for-10 from the free throw line, no doubt fulfilling some dark prophecy about the End of Days.

Meanwhile, the Magicians offset their poor shooting (42 percent) by drilling 17 threes and grabbing 17 offensive rebounds for an astounding Offensive Rebounding Percentage of 37 percent. They finished with a 23-9 edge in second-chance points.

The cHeat scored trailed by as many as 19 points in the second quarter. Then, after an end-of-the-half comeback, managed only 11 points in the third before eventually succumbing to a 102-89 defeat.

Said LeBron James: "They shot the 3 extremely well and the big fella in the middle took care of his 20 and 20 once again. Sometimes you have to pick your poison, but we gave up both tonight. They are an extremely tough team to beat when they are making the 3s and the big fella is doing what he wants."

The Philadelphia 76ers: The Sixers lead the NBA in Defensive Efficiency...but not against Tony Parker. TP was in full-blown Video Game Mode, going off for a game-best 37 points (12-for-24 from the field, 13-for-13 from the line) while dishing out a game-high 8 assists. And he never committed a single foul.

Translation: "I let my man run by me 'cause Timmy's there."

Of course, the real story of this loss might be Gary Neal, who scored 12 points in the last six minutes of the first quarter on 4-for-4 shooting (including 3-for-3 from downtown). Mind you, Neal averages 8.5 points per game.

Said Andre Iguodala: "He hurt us early and we can't let that happen. We have to be more alert. We have to keep aware of guys who can hurt us and try and not let them get good looks."

Random note: The Sixers attempted 11 free throws...two fewer than Tony Parker and 15 fewer than the Spurs as a whole. And this game was in Philly.

The Washington Wizards and John Wall: Okay...they were blown out at home by the Carmelo Anthony-less and Amar''''''e Stoudemire-less Bricks. And how 'bout this defense on the suddenly unstoppable Jeremy Lin (23 points, 9-for-14, 10 assists):

And yes: That was Lin's first dunk in the NBA.

Said Lin: "Just one of those in-a-moment things. I think they messed up on their coverage, so I was able to get free."

In possibly related news, the Generals are now 5-21.

The Toronto Craptors: Despite playing at home against a team with a 3-10 road record, the Craptosaurs couldn't contain Mike Dunleavy Jr. (16 points in the second quarter) or Carlos Delfino, who had nailed six treys and had season-highs in points (25), rebounds (9) and steals (4).

What's more, Milwaukee's anemic offense went off for 58 points in the first half. And, yes, that was a season-high for Toronto opponents.

Drew Gooden, quote machine: "Carlos was huge. It was kind of like him and Dunleavy were Siamese twins. Dunleavy had it going in the first half and Carlos got it going for us in the second half. That was big."

The Indiana Pacers: Their biggest lead? 1. Their largest deficit? 21. And this play pretty much sums up the game:

Yep. The Pacers were a step slow all night. Which pretty much explains why the Dirty Birds had a 28-11 edge in fast break points.


After his nifty play early on, Pachulia had some ugly moments toward the end.

First, he missed a dunk after Smith flopped to the court to retrieve a loose ball and flipped a pass forward to his center, lumbering all alone in front of everyone else. Then, apparently losing track of where he was on a fast break, Pachulia took a pass and seemed ready to go in for another dunk attempt, only to realize he was too far from the hoop. He was called for walking instead.

But I'll add this anyway: The Nyets trailed by as many as 18 points before Deron Williams scored 17 fourth quarter points in a useless comeback attempt.

Said Williams: "We lost. That's about it. It's another loss at home. We've been struggling here all season, trying to find our shots and rhythm. It's hard to win when you are shooting in the 30-percent range."

Actually, New Jersey shot 42.3 percent. But I hear ya, Deron.

The Minnesota Timberwolves: The T-Wolves were Love-less in Memphis last night...and it showed. They shot 39 percent as a team -- with Ricky Rubio (1-for-6) adn Luke Ridnour (1-for-8) leading the Brick Parade -- and gave up a ridiculous 21 offensive rebounds.

Oh, and Quincy Pondexter lit them up for a career-high 17 points. Quincy Pondexter. Sounds like the lead character in a reboot of Revenge of the Nerds. Probably shouldn't let a guy like that beat you.

The Denver Nuggets: I'm not trying to be a Doubty McDoubtenstein or anything, but the Nuggets have lost four straight and six of seven overall, and they're only 7-6 at home following last night's 105-95 loss to Cuban's Cowboys. That 15-7 record looked great. 15-11? Not so much.

Could the post-'Melo bubble be bursting?

Hey, look, I know Danilo Gallinari (left ankle) and Timofey "I got Mozgov'd" Mosgov (Left ankle) were out of action, and that Corey Brewer missed the game due to the death of his father. But still.

According to the AP game notes, the Mavs' 64 first-half points were only two off their season-high...and it was a season-high for a Nuggets opponent. Oh, and they've lost four straight at home for the first time since 2003.

The Portland Frail Blazers: Speaking of teams with burst bubbles, the Frail Blazers -- the team Charles Barkley said was going to finish with the best record in the West this season -- dropped to 14-12 after a 103-96 home loss to the Rocketeers. Houston's reserves dropped 66 points on the Blazers, includindg a season-high 22 for Chase Buddinger.

McHale's Navy shot nearly 53 percent and led by as many as 19 points despite committing 23 turnovers.

Of course, Portland would be 15-11 today if the refs hadn't made a bogus goaltending call against them on Monday night. A call the NBA later admitted was wrong.

Said Raymond Felton: "We've just got to come together collectively and figure this thing out as a team. That's all there is to it."

I dunno. I mean, maybe the Frail Blazers just aren't as good as we thought they'd be. I mean, their one-two punch at center is Marcus Camby (37) and Kurt Thomas (39). They only go about three-deep off the bench (Thomas, Jamal Crawford and Nicky Batum). And their starting backcourt (Felton and Wesley Matthews) is okay and all, but hardly an All-Star duo. You have to wonder how good this team COULD be with a healthy Brandon Roy and Greg Oden. But that's like saying, "imagine how good they'd be with Bigfoot and Godzilla," because that's about a realistic.


Spurs-Sixers: Cory Joseph had 24 seconds to celebrate with Toad and Yoshi for a Mario.

El (Oh El) Heat-Magic: Juwan Howard hit jackpot yet again with 84 seconds of metal detecting on the sands of South Beach for a 1.4 trillion.

Clippers-Cavs: Semih Erden eked out a steal in 6:35, only to foul once for a 1:0 Madsen-level Voskuhl.

Pistons-Nyets: New Jersey's Johan Petro provided a brick, turnover, and two fouls in 4:23 for a +4 and a 3:0 Voskuhl!

Pacers-Hawks: Willie Green garnered three fouls (two from the SunTrust Plaza) for a +3 in 7:22, while Vladimir Radmanovic won't have to marry for wealth after a 2 trillion (119 seconds).

JJ said...
Clippers - Argh!! They are still who we thought they were! And that Griffin "pass" was totally a shot.

Lin - YES! I love his enthusiasm and demeanor. Just because of him, I hope Knicks make the playoffs this season.

David said...
I dont have anything to say about the games last night. But I was browsing through old video game manuals of mine yesterday and found this gem in the NBA 2k7 manual in the part regarding player matchups:

"Sometimes, it doesn't make sense to have each of your players guard the opposing player who plays the same position as them. Use this screen to customize your defensive matchups, so you don't have Ron Artest wasting time on Devean George."

GMoney said...
As a Cavs fan, this team is infinitely more fun to watch than that turd they put on the floor last year. But with that said, Luke Harangody is, without question, the worst basketball player that I've ever seen. I don't know if he's made a shot since Thanksgiving and that includes practice.
2/09/2012 1:16 PM

AK Dave said...
RE: the first photo of the girl holding the Lin poster:

Is that her REAL forehead?

With Jeremy Lin blowing the NBA the hell up, I have to wonder where AnacondaHL has been lately. I bet he's doing backflips somewhere. As I recall he got in on the ground floor of the Lin movement...
2/09/2012 3:33 PM

Reid said...
As a Blazer fan, it's painful to point this out but it's worthy of a facepalm.

Silvio said...
Bucks' offense is not anemic anymore, over last 9 games they're at 99 points average and in 7 of those 9 games they scored century or more.
Their average is 99-98 over those 9 games, while it was 92-95 in first 16 games. Gooden instead of Bogut and often DNP-CDs for S-Jax did the trick. With 11-14 they're still bellow 50%, but 5-4 in that last 9 games. Still I don't have high hopes, I believe opponents are going to find way to exploit lack of Bogut's defensive presence even better. But curiously enough, most of recent Bucks' wins came thanks to good offense.
2/09/2012 4:42 PM

Czernobog said...
Am I the only one who thinks harping on Dwight's trade demand is getting old? The guy leaves everything on the floor every night, people in "trade me' situations usually mail it in. Dwight, on the other hand, is a runaway MVP contender as of now.
2/09/2012 6:01 PM

G21 said...
Lin is one of the few NBA players that took advantage of their extra minutes and showcased their talents to the league, and the world. He's legit, and im excited to see how he fares against the Lakers. this site has some pretty creative shirts lol