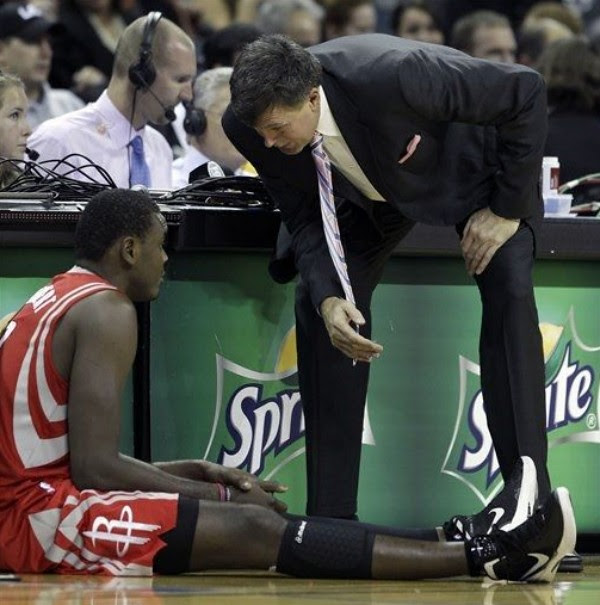 "That's just how I gave it to Rambis in '84. I call it the 'Pain Train,' baby."
Hey, everybody. Sorry for the lack of postage the past few days.

The Excremento Kings The Paupers shot 39 percent, let the Sixers shoot 56 percent, and trailed by as many as 34 points before downing in a sea of their own suck. That was one shoooooort Dead Coach Bounce. Huh. Maybe Paul Westfail wasn't the only problem in Sactown.

Said Kings coach Keith Smart: "We didn't have our regular rotation so the other guys had to make adjustments." Smart must be taking about the injury to Marcus Thornton...wait a tick. Keith Smart? The same guy who failed in Golden State is now head coaching in Sacramento?

Tyreke Evans, quote machine: "They just put a whipping on us."

Bring out the gimp.

The Toronto Craptors: The Washington Wizards Generals hadn't won a basketball game in almost nine months. Then the Craptors came to town and Washington won in a laughable blowout, leading by as many as 27 points before settling for a 93-78 victory.

Said Craptors coach Dwane Casey: "Our disposition wasn't good coming out of the locker room to begin the game. We knew they were a hungry team, they were a wounded team. They were going to come out scratching and fighting and I didn't think we matched their fight."


The Charlotte Bobkittens: Despite shooting 39 percent from the field and committing 22 turnovers, the Rocketeers snapped their four-game losing streak against the Bobkittens. In Charlotte, no less.

Countered Charlotte coach Paul Silas: "I thought we were tired and couldn't really do anything, couldn't execute, couldn't run, couldn't defend. It's just one of those nights. Even layups. We had shots right at the hoop but we couldn't convert. I can't fault them, I mean, they played as well as they could play. We just didn't have it. They were sitting here waiting for us to come in (from New York). We played a tough game Monday night (at the Knicks), and then to come back tonight and have to play, that's rough. It's rough."

Yes, yes, yes. We get it. Schedule bad. Me tired. You know why NBA coaches were secretly thrilled about the lockout? Now every loss has a built-in exuse.

The Detroit Pistons: The only thing standing between the defending champion Mavericks winning their first road game of the season and crawling back to .500 was the Pistons. Which is like saying nothing was in their way. Dallas shot 55 percent and led by as many as 28 points...

...and with Rodney Stuckey (groin) and Charlie V. (right ankle) out, the 100-86 loss was probably inevitable. And nearly historically bawful.

From the AP recap:

The Pistons narrowly avoided that distinction by scoring the game's final 12 points.

Damn you, Pistons, for ruining my fun.

Lawrence Frank, quote machine, Part 1: "Everyone wants a baby, but few people want to go through the pregnancy."

No, no, no. Everyone wants to MAKE the baby, but few people want the pregnancy.

Lawrence Frank, quote machine, Part 2: "As I've said, this process may be very painful. It doesn't get better just because you want it to get better. I hope we are all frustrated, because when you are, you have two options. The first is to work harder and understand what you want to do. The second choice isn't an option."

The San Antonio Spurs: Remember those five minutes when it looked like the Spurs would be okay without Manu Ginobili? Yeah. That timer has gone ding-ding-ding.

The Deer In The Headlights might well be the league's most offensively challenged team. But they dropped 106 points on 52 percent shooting on the Spurs, and Stephen Jackson had 34 points and 8 assists against them. Jackson was 12-for-17 from the field and 3-for-4 from distance. Mind you, through Milwaukee's first eight games, S-Jax had bricked 70 of his 103 field goal attempts.

Said San Antonio coach Greg Popovich: "It's the worst defensive team we've ever had. We have a long way to go."

To make matters worse, the Spurs didn't call timeout to draw up a good look on a game-tying three before the final buzzer. From the AP recap:

Richard Jefferson's tying 3-point attempt hit the back of the rim at the buzzer.

Popovich blamed himself for the team not getting a good play to run in the final seconds. He said he yelled for the players to call timeout instead of telling the referees he wanted one.

"I tried to yell out to the players for the timeout and they didn't hear it," he said, terming the final play "alley ball." "It was my fault. I should have been on top of the referee."

The Minnesota Timberwolves: I always love it when bad teams switch up their fail script. This game coulda been a blowout after the Timberpoops fell behind by 24 in the second quarter. Only they rallied to tie the game in the second half behind some sweet play by Ricky Rubio. Unfortunately for Minnesota fans, Derrick Rose quashed the rally. So yes, technically a loss, but a funner loss than usual.

The San Antonio Spurs: I forgot the Spurs shot 60 percent in Milwaukee and lost.

The Phoenix Suns: The Suns got blown out by the Lakers in L.A. And, frankly, it was pretty clear the Luke Walton (plus-minus of +32) hasn't forgottne about that playoff series back in 2005. Grant Hill: 1-for-12. Ick.

Purple Paupers-Sixers: Former court jester Spencer Hawes bricked and fouled once in 10:52 as starting big man (despite three assists and two blocks) for a Madsen-level 1:0 Voskuhl.

Rockets-Bobcats: Charlotte's Desagana Diop did garner one rebound in 13:09, but a trio of fouls and turnovers each led to a 6:1 Voskuhl.

Bulls-Wolves: Minnesota's Wayne Ellington played a tune about two pieces of masonry that was 8:16 long for a +2 suck differential.

Cavs-Jazz: Semih Erden had two steals, a board, and two made free throws in 16:38...only to foul four times and lose the rock twice to give Cleveland a 6:3 Voskuhl.

Clippers-Blazers: Brian Cook fired up a trio of bricks (two from Pioneer Place) and a foul for a +4 in 4:50 and a 1:0 Madsen-level Voskuhl.

Suns-Lakers: Robin Lopez overcame two boards in 12:41 with two fouls and a turnover for a 3:2 Voskuhl.

For the Lakeshow, Andrew Goudelock tossed a piece of masonry from the Santa Ana Freeway and lost the rock twice in 8:53 for a +3, while Devin Ebanks heaved a brick from the Walt Disney Concert Hall for a +1 in 63 seconds.

For East Oakland's finest, Chris Wright was 100% from the field on one attempt...but only had 25 seconds of fireflower-shooting time in a non-lacktive Mario!

Mamba Luvah said...
Kobe Bryant is god, man...GOD. He don't need no teammates, just put him out there on his own. He can take anyone, man. He can take on an army. The Mamba is king, man. Don't piss him off, cuz years later he gonna wait for the right time to put up 30-some shots on you, and you won't stand a chance. Even with three broken fingers and no ligaments in his whatsit, you won't take the Mamba!
1/11/2012 2:09 PM

Sturla said...
Holy crap, how did you miss this http://www.youtube.com/watch?v=CLD9WfKIyBM

Basketbawful said...
They are trying to steal your gig at Grantland. You need to show 'em how the bawful is done.

stephanie g said...
That was like manna from heaven, and not in that awkward Darko Milicic way. Something to keep an eye on: World Peace is 2-23 on three pointers this year. And this four page RealGM topic about the worst games in Raptor history is a treasure trove of bawfulness. Even includes lots of links to boxscores:


@Mike: "They are trying to steal your gig at Grantland." You mean the Simmons Ego Land? (TM)


Oh, and I've got a footbawful/basketbawful mashup for you: DeAnthony Thomas' nickname is "Black Mamba?" Spectacularly original. Really. I bet you've got a big guy on your team creatively nicknamed "Moose" as well. Dude is a heckuva football player, though. maybe too small for the NFL though.
1/11/2012 7:01 PM

Bing said...
Hey Grant Hill, maybe box out or something instead of taking off down the court after Kobe jacks a 3. Just saying'...