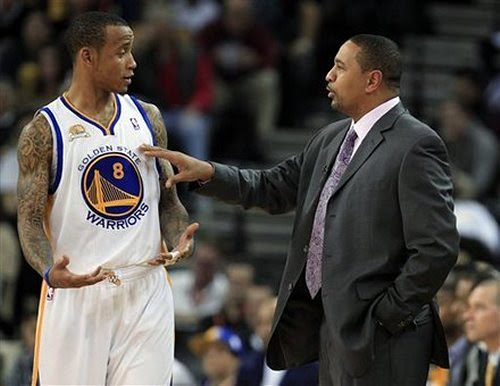 No time to waste. I'm already getting this online after the early games have started. Oops. Onto the pictures and tomfoolery! 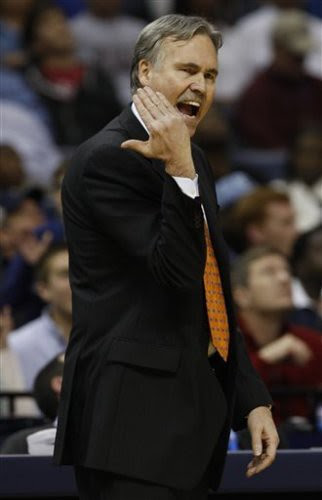 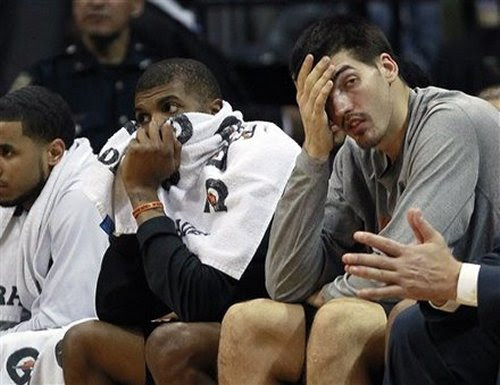 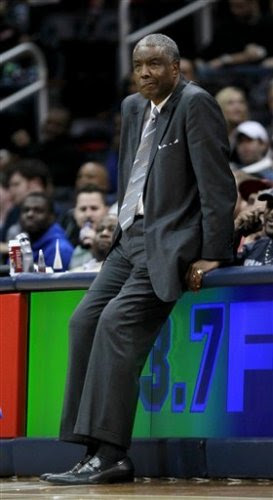 "Maybe I can run away to Mexico... anything to get away from this team..." 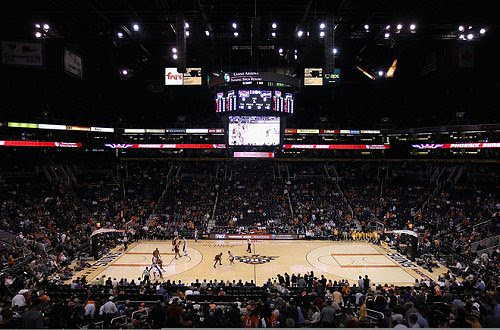 Bulls at Celtics, ESPN, 8:00pm: The latest word is that Derrick Rose DOES plan on playing. If it weren't for Rajon Rondo, he could probably still wear his boot and still play competitively against this team.

Heat at Nuggets, ESPN, 10:30pm: Every single Heat game, I get to look at the Heat's injury report and see Eddy Curry listed as "day-to-day." How many consecutive days can you NOT play and still be considered day-to-day? Can the Heat manage to have him D2D all season? Make it happen.

Wizards Generals at 76ers, 7:00pm: The Sixers may have ended their winning streak, but they get back to back games against the Generals. Who did they bribe in the NBA front office to get THAT kind of scheduling love?

Pacers at Craptors, 7:00pm: Good news everyone! Andrea Bargnani might have finally started to develop into a talented NBA player. Bad news everyone! He's injured. Get ready for rollerskating craptosaur action in Monday's WOTN.

Pistons at Bobcraps, 7:00pm: It's very possible that this will be the least-watchable game so far this season. Following Ben Swanson's Twitter feed may be the only thing worthwhile about it.

Timberwolves at Hornets, 8:00pm: Ricky Rubio is set to get his first NBA start. Awwwwwww yeaaaaaa.

Kings at Rockets, 8:00pm: Maybe Excremento should fire their coach after every game so they can use the dead coach bounce to win all their games?

Bucks at Mavericks, 8:30pm: At this point I would like to remind everyone that the Bucks are roadkill -- they have yet to win on the road in six tries this year. And that sounds just about right, doesn't it?

Trail Blazers at Spurs, 8:30pm: The Blazers have had success against the Spurs the past year or two, and the Spurs are also a little lacking in defense at the moment. Keep an eye on this one.

Cavaliers at Lakers, 10:30pm: Here's a nice one for you to ponder: The Cavaliers "are 5-5 this year, but opponents have a .391 winning percentage. Expect regression to the mean soon..."

Lakers at Clippers, NBA TV, 10:30pm: This is pretty much the polar opposite of scalpers' night off.

Timberwolves at Hawks, 7:00pm: Anyone who tries to predict how this game plays out is just wasting his time. Wait, you could say that about ANY Hawks game. Carry on.

Celtics at Pacers, 7:00pm: Both teams will be tired, so shooting might be a little sketchy. The Pacers are a good rebounding team. The Celtics, on the other hand, couldn't snag the ball if they were playing against 8 year old kids.

76ers at Wizards Generals: We really need soccer-style regulation, right? Kick the Generals down into the D-League and call up someone like the Fort Wayne Mad Ants. Is it too late to add that to the collective bargaining agreement?

Trail Blazers at Rockets, 8:00pm: Looking at their schedule, the Blazers haven't had much success on the second night of a back-to-back this season. This might be one to watch.

Knicks at Thunder, 8:00pm: Did you realize Melo is actually ahead of KD right now in points per game? Does KD even care? (And I mean that in a good way)

Hornets at Grizzlies, 8:00pm: Yep, nothing like a New Orleans/Memphis matchup to bring in those fans... *crickets*

Kings at Mavericks, 9:00pm: The Purple Paupers are 30th in the league. Of course they are. They have DeMarcus Cousins on their team.

Nyets at Jazz, 9:00pm: It's a miracle Deron Williams is averaging 8 assists per game. With his supporting cast, I'd be fully behind him if he decided to never, ever pass the ball.

Suns at Spurs, 9:00pm: Damn it, what did I do with that anti-aging formula? We'll need it to make this game legitimately great like we think of Suns/Spurs games being.

Warriors at Pistons, 6:00pm: Sigh. Don't even think about this game. Go do something more constructive with your time, like watch this movie:

By the way, there is a RiffTrax version of that movie featuring some of the guys from MST3K that is well worth your money in my opinion.

Jazz at Nuggets, 8:00pm: A nice Northwest matchup. No jokes here -- this game might be good.

Paul said...
hahahahaha, D'Antoni's pimp hand made me spit all over my screen.

Watching the 1st. quarter of teh Bulls-Celts game, Derrick Rose not looking like he is just off the open cast.

Just in case the game in Denver stays close through the 4th quarter. I want to put the under/over on the number of open looks Lebron James WILL PASS at 5.
1/13/2012 7:14 PM

Naz said...
Paul any time anyone says anything negative about Lebron it makes me want to see Miami win the Finals every season for the next 10 years
1/13/2012 7:49 PM

Mamba Luvah said...
Listen, once again, people don't listen. Mamba rememberz when people said Lebron was the best player in the league. And he played in Cleveland, right? So Mamba said I'm gonna show those mf's and drop 30 shatz on them Cavs, then people never gonna forget who razed those bitchez. When Mamba comes to town, hide the women and children, cause 30+ shatz gonna rain down...you can't stop it. Mamba is unstoppable, like fire from heaven.
1/13/2012 11:58 PM

Justin said...
I can't figure out how Hawes got to be this good. It's been too many games to be considered a fluke. Him and Mullens. BJ Mullens, the same guy who plays in prison rec leagues for fun. The Bobcats may be a horrible team, but they're such an odd assortment of characters it's fun to watch. BJ, however, may be the ugliest player in the league.

I hope that Lakers-Clippers game goes down to the wire, and people can see the difference in how Chris Paul and Kobe Bryant operate in the so-called clutch.
1/14/2012 2:35 AM

Team_BC said...
This year's Generals have to be the most bawful team in history. The Nyets and Timberpoops from year's past were just bad, but with the "talent" on the Generals, they should at least be competitive.
1/14/2012 10:16 AM

kazam92 said...
It's an insult to the Washington Generals to refer to this bawful bunch of sadsacks as such. Just a pathetic team from top to bottom.
1/14/2012 4:54 PM

chris said...
Purple Paupers are down 52-23 right now in Dallas.

Do I have anything else to say?

Silvio said...
I understand Paupers being killed by Mavs. Losing by almost 40 and scoring only 60, ... well, it happens. But how in hell Mavs limited Tyreke Evans to 3 pts (1-8 FG in 31 minutes) is enigma for me.

In other news Craptors scored only 1 (one) free throw, they shot 1-7 FTs in 48 minutes.
AP:
The Raptors didn’t score from the foul line until Linas Kleiza made a free throw with 7:14 to go in the fourth. Toronto was just 1 for 7 from the line.
Neither team made a free throw until Chicago’s Carlos Boozer sank one to complete a three-point play with 9:41 to go in the third quarter.
1/14/2012 11:11 PM

Bing said...
I guess it was a joke but I like the "soccer-style regulation" idea. Make it so.

Also, Kobeshootsalltheshots is not an offensive system. It's a dumb, unsustainable way to try and win games. And today, the Clips beat 'em. Sad times in LakerNation.
1/15/2012 1:53 AM

Paul said...
I'm so pissed right now. Mike Brown has successfully installed the same offensive system he had in Cleveland now in L.A. Give the ball to your best man and hope for the best.

Yes Kobe is hitting at an impressive 50% from the field and yes Gasol has been a little off and yes Bynum is yet to develop any sort of passing from the post when double teamed.
But they are still the largest and most talented front court in the game.
Mr. Mike Brown can you not tweak and tinker this shit enough so that it at least resembles something of a "system"?
1/16/2012 12:34 AM

Austen said...
The entire league lately seems to think it's a great idea to not take the Jazz seriously, especially Paul Milsap. I don't know why teams keep doing that when he's arguably the best player on the Jazz (and is easily in the running for player in the league with the most heart when he's on the floor). Denver learned tonight just what a stupid idea that was when Milsap torched them for 14 straight points in the 4th quarter (he scored 16 of his 26 points in the 4th) to turn a close game into pretty much a blow-out.

Torgo said...
No, the Wolves could use a two or three who could perform at an average level. Instead they have Wesley Johnson and some poop. Johnson being the worse of the two.
1/16/2012 1:52 AM

Utah's announcer Craig Bolerjack was talking with commentator Matt Harpring about the physical nature of the Jazz bigs (particularly the younger guys). His quote:

"Matt, when you played you were a banger. Did you ever use protection?"

JJ said...
Paul, Mike Brown is a defensive coach. I don't think he's that creative with offense. Also, he didn't dare go against LeBron. So, why would he go against Kobe now? Especially when Kobe is far more likely than LeBron to get him fired if Brown gets him pissed off (aka ask him to pass the ball).

kazam92 said...
Austen, trust me. Miami does not take Paul Millsap lightly. In fact we hate that bastard with a passion.