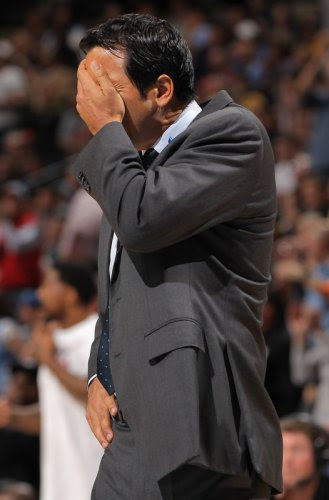 Sorry on Bawful's behalf for the lack of a WOTW post, and sorry on my behalf for getting this BAD post up halfway through the early games. Long weekends always make things weird, you know? I still feel like I should be busting my butt at my Clark Kent job right now. Instead I'm nearly in a food coma from eating too many chicken wings at lunch. 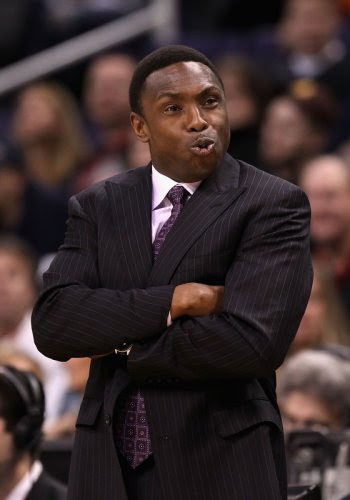 Avery Johnson would like you to know that his team blows 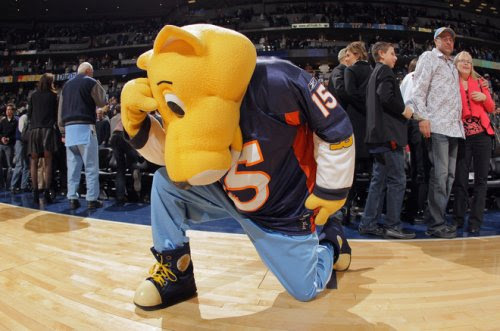 So, uh... this happened. Go away, Tebow.
/bitter Steelers fan 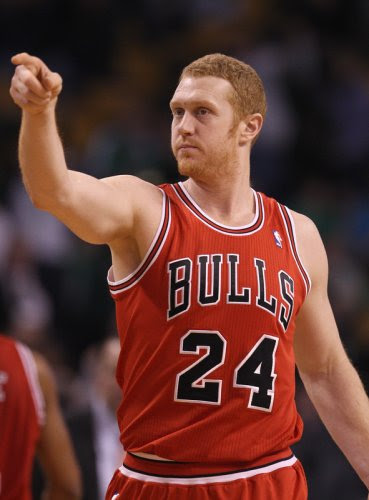 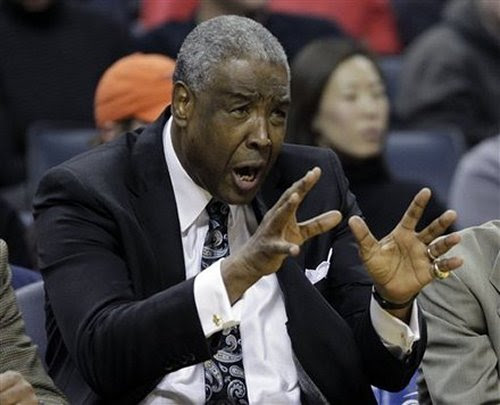 When did Paul Silas turn into a zombie? 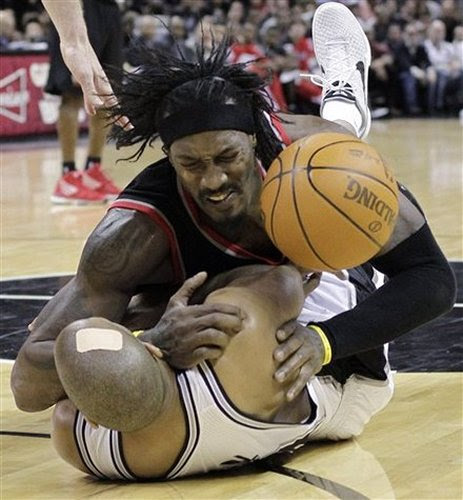 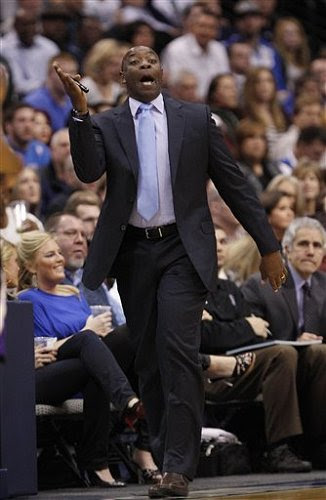 I cannot find the words to describe the expression Keith Smart is making here... 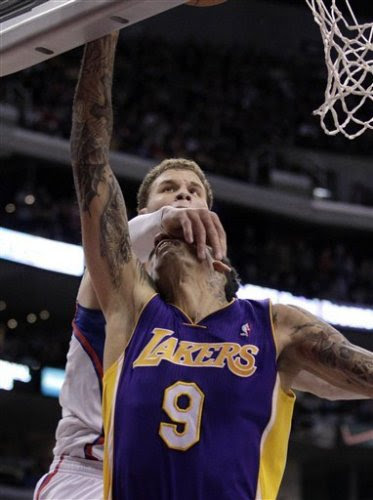 Hand in the face, in its most literal form 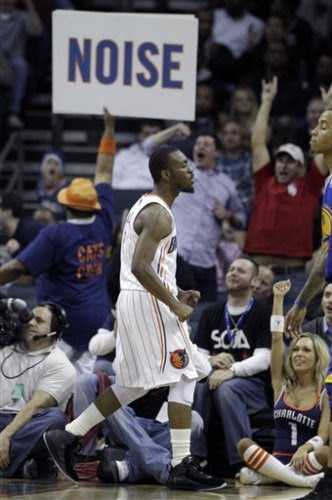 Wait a minute, that sign is silent. Shouldn't it just say "TEXT"?

Thunder at Celtics, TNT, 8:00pm: Kendrick Perkins makes his return to Boston! I bet he's starting to feel like it might not be such a bad thing to have gotten away from that aging trainwreck of a team, eh?

Mavericks at Lakers, TNT, 10:30pm: Saturday night, Dallas annhiliated Excremento 99-60, setting a franchise record for fewest points allowed. They held the Purple Paupers to 25.6% shooting. Then again, Excremento doesn't have Kobe Bryant, Andrew Bynum, or Pau Gasol. But then again, the Lakers have Bynum and Gasol but they haven't had to do much lately since Kobe's gone into full ball-hog mode.

Magic at Knicks, 1:00pm: The game preview I read at ESPN.com for this mentioned "The Magic (8-3) come to New York as a well-rested team," but they sadly didn't tack on the joke "because everyone just got to stand around while Dwight shot free throws last time they played." This is why we're here, folks. You're welcome.

Bucks at 76ers, 2:00pm: Here's an exchange I had on Facebook yesterday with Basketbawful reader Timmothy Merath:

Tim: Bucks? Not familiar with them... Do they play that game with the orange ball?
Me: The Bucks are present at games where they use the orange ball, but I don't believe they actually play in said games.

Rockets at Wizards Generals, 2:00pm: Wow. Accuscore doesn't think very highly of the Rockets. They project the Generals have a 44% chance of winning this game. I'd like to remind everyone the Rockets are 5-7, while the Generals are 1-11. Just in case you somehow forgot. And if you did forget, how did you manage to log onto the Internet, much less find your way here?

Cavaliers at Bobcraps, 2:00pm: You know, Kyrie Irving might just be kinda sorta good at basketball. Unlike anybody on the Bobcraps.

Trail Blazers at Hornets, 3:00pm: Both of these teams are on three game losing streaks. Accordingly, I will give you three guesses as to which team's losing streak is more of an anomaly. (Wait, three guesses? There's only two teams. I think I need to go back to bed.)

Nyets at Clippers, 3:30pm: The Clips are entering a back-to-back-to-back situation. Not the best of times for Chris Paul to hurt his leg. Then again, they're playing the Nyets at home. Maybe it's not so bad after all?

Anonymous said...
Looks like Silas is trying to shoot Force lightning (whether at his Bobcraps or the other team, it doesn't really matter).
1/16/2012 3:18 PM

There was one sole not bawful thing about Hornets tonight ... but it didn't last for long. With around 3 minutes to go, Jarrett Jack took hard fall. I winced, team cancer seemed to be hurt ... but after few moments, he got up, shook off the dust and, unfortunately, continued to play.
1/16/2012 4:30 PM

Stockton said...
Brandon Jennings plays like a deer blinded by headlights!
How the hell can a team put control of the game in his hands and expect to win?
1/16/2012 5:13 PM

Ebb said...
Has anyone else besides me noticed how much Perkins has improved with his FTs this season? Dude is coming into this game with 78% of FTs made at the line. This guy was averaging around 58% before the season and it's not like he's taking less FTs than before. Losing weight must help with FTs!

Team_BC said...
So I saw the "Top Performers" on the espn recap for the Min-Sac game and instantly thought that someone must have a 'Reke-crush, but then I looked at the box score and realized that yes, 9pts for a gunner was probably the best Sac line. (To be fair, almost a Jason Kidd triple double).

Mean1 said...
Thank god Fisher hit that shot and Vince missed the game-tying 3. I knew I was in for some bawful when I not only saw that Delonte West was in the starting lineup but the graphic that TNT put up for the started had West, Kidd, Kobe, and Fisher as the starting forwards and Dirk, Marion, Barnes, and Gasol as the starting guards. It's a shame that they both couldn't lose this game.
1/17/2012 12:13 AM

E.J. 'Trey' Alverson said...
In case people haven't noticed, Ivan the Terrible is now getting 20+ minutes a night for the Horford-less Hawks.

Ivan Johnson, the 27 year old rookie who played for 4 different college teams and has been banned from the Korean league for life, is playing more on a per night basis than Joakim Noah. I think that says all that needs to be said about both the Atlanta Hawks and Joakim Noah.
1/17/2012 9:14 AM

kazam92 said...
Ivan the turrible continues to haunt me even though Miami managed to win the triple OT game. He still looks like a warlord.
1/17/2012 9:43 AM