Double LeBron-Bosh! What does it mean?? So intense.
(Glances at calendar) 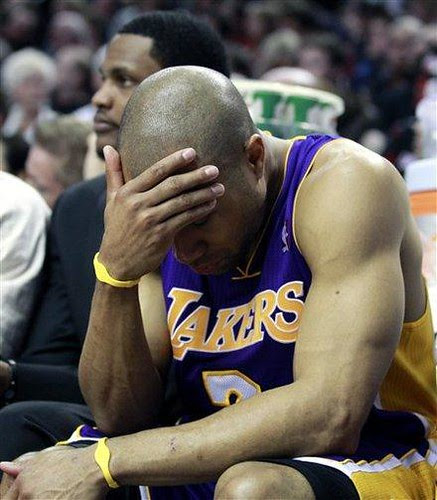 There, I just summarized the Lakers' most recent games for you. You're welcome. 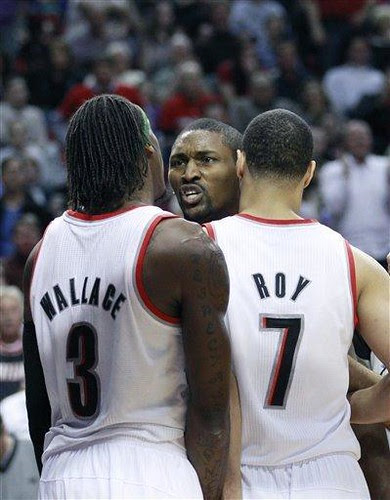 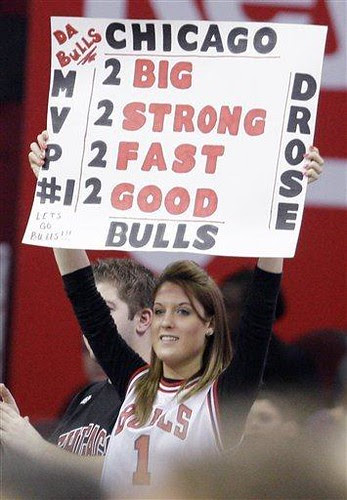 What's the matter? MC Hammer want too much in royalties to fit "2 LEGIT" on your posterboard? 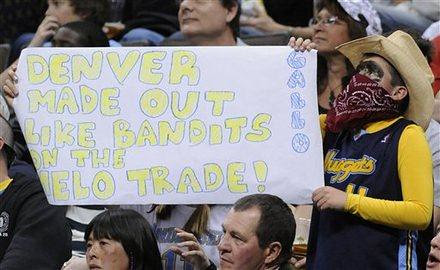 Nice bandana, cowboy. It'll be strangely appropriate when someone angrily tells him "Screw you and the horse you rode in on!" 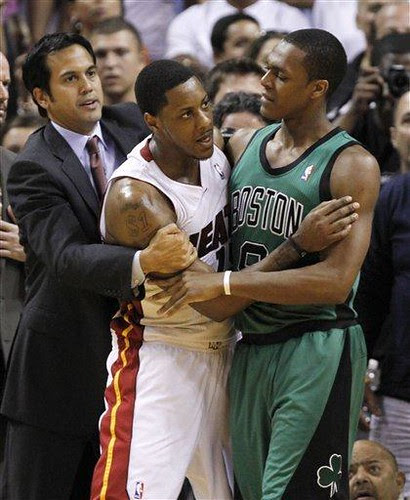 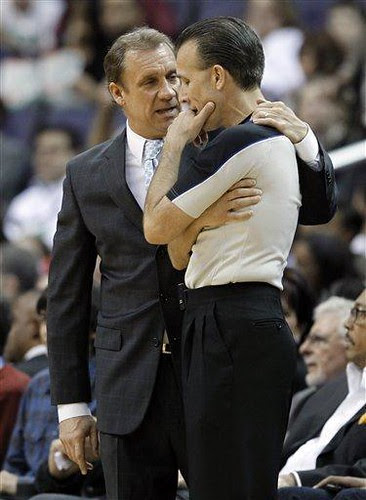 Well, I suppose rendering the refs unconscious with a Vulcan Nerve Pinch is one way to get rid of bad calls against your team 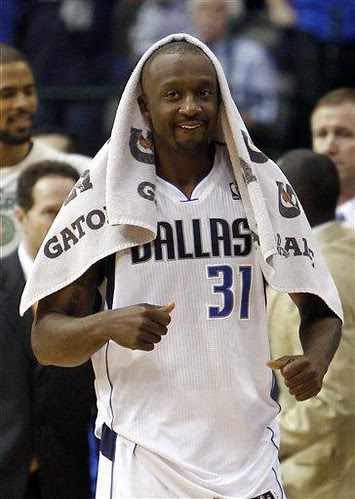 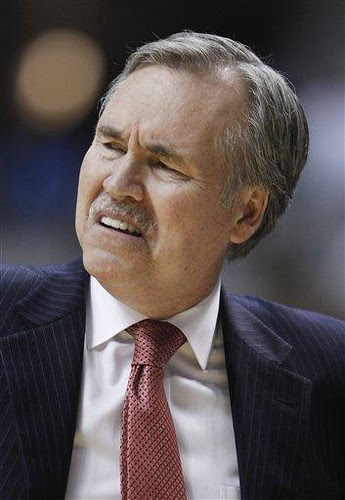 Mike D'Antoni's reaction to an assistant suggesting his team play better defense was decidedly unpleasant
Nationally Televised Games:
Magic at 76ers, NBA TV, 7pm: Sneaky entertaining game. The Sixers took the first game in the season series, and the Magic won the next two by slim margins (one of those games even went to overtime).

Thunder at Kings, NBA TV, 10pm: The Purple Paupers have one more home game left on their schedule Wednesday night, but this will probably be your last opportunity to see a nationally televised game at the Power Balance Pavilion. So sad. I feel like Chris needs to pour one out for his dead homies team.

All The Other Games:
Heat at Hawks, 7pm: Per Adrian Wojnarowski, the Heat told Eddy Curry they were no longer interested in his services after several workouts with the team. Of course. He'd just be dead weight on their roster. 350 pounds of it.

Bobcraps at Nyets, 7pm: The only bright point for the Bobcraps the past few games? Kwame Brown's solid play. That has to be one of the most depressing things I have ever written.

Celtics at Wizards Generals, 7pm: This Celtics late-season coma is getting so out of hand, they're going to wake up in the playoffs with a wicked beard like Steven Seagal in Hard To Kill.

Cadavers at Pistons, 7:30pm: Josh Keown over at The Clearly Dope came up with an intriguing idea for a Lost prequel involving the Bad Boy Pistons crash-landing on the island (the Globetrotters got lucky -- they got Mary Ann and Ginger on their island). Upon my suggestion, Josh gave it a slight update to incorporate Michael Jordan. All I can say is there better be a casino and a golf course on that island, or MJ's gonna be pissed.

Jazz at Hornets, 8pm: In his last game, Chris Paul was held scoreless for the first time in his NBA career. His in-depth analysis? "I just couldn't make nothing." Of course! Now it all makes sense! He didn't score any points because he couldn't score points! (In other news, redundant sentence is redundant.)

Craptors at Bucks, 8pm: Short bench alert: Toronto could be without Bargnani, Calderon, Barbosa, and Johnson. This is great news for the Bucks as they're looking to sweep the season series for the first time since 2001-2002. Because, hey, if you can't make the playoffs, it's all about moral victories.

Mavericks at Rockets, 8:30pm: Short bench alert: Houston could be without Luis Scola and Kyle Lowry. This is great news for the Mavs as they're looking to sweep the season series for the first time since 2002-2003. (Sorry, couldn't help myself. Can't resist an opportunity to copy/paste almost an entire paragraph!)

Warriors at Nuggets, 9pm: Monta Ellis has a concussion and will not play the final two games of the year. oh no! What will they ever do without him?!

Timberwolves at Suns, 10pm: Depressing news from John Schuhmann: "A moment of silence for the end of The Nash Streak. 9 straight seasons leading the No. 1 team in offensive efficiency comes to an end."

kazam92 said...
I was a Wizard fan tonight! Great win against Celtics bench! Jordan Crawford is a baller and now the East bracket is set in stone.

Jon L. said...
The Celtics probably won't make it to the finals again this here because of the lack of Perkins. The Celts have played poorly since trading him and I know they did this last year, but this year is not looking as promising.
4/11/2011 9:58 PM

LotharBot said...
The Nuggets' JR Smith had an unorthodox "3 point play" against the Warriors late in the 3rd.

chris said...
SportsCenter right now. Charlie Contract's post-game interview as he explains that the reason for wanting to punch Hollins in the man region (and yes, ESPN anchors said "man region") was...he got elbowed and some "words were said."

Apparently police had to prevent the eight-jillion-dollar man from entering the Cavs locker room.

LotharBot said...
I know the Gol_en State Warriors' interior presence is somewhat lacking, but this game was ridiculous. They gave up 76 points in the paint to the Nuggets. Nuggets bigs also shot 14 for 20 on free throws, which I don't think count as points in the paint but definitely were points caused by GS not being able to stop Yi's chair.

And it wasn't all the Nuggets' best players. The starting center, Nene, didn't play in the second half. The third string center (Mozgov), backup powder forward (Harrington), and starting and backup small forwards (Gallinari, Chandler) were out. That's five guys 6'8" or bigger who were hurt, and still GS couldn't keep their remaining guys out of the paint.

TeamD said...
I really believe in the Bulls this year, rose is unstoppable, even with double teams, boozer did not yet ignite and we know its a great scorer and rebounder and thibs barking at him constantly made him an almost decent defender. Noah and Deng are scrappy and you have a complete team. Bench is fine, korver is a 3 point finisher and Gibson a nice defender. Of course CJ watson and brewer can be the sparks off the bench, they have a great team.

Heat are too worried about people hating and they became sissy superstars, only men win championships.

Lakers chemistry is done. Kobe ruined it, everyone started to hate him, thats the vibe i get from them, just look at their faces when kobe fucks it up.
4/12/2011 12:32 AM

snafu said...
Kosta Koufos managed to elbow Kenyon Martin in the face while giving him a hi-five.

One of the readers of this here fine blog posted this video on Facebook: