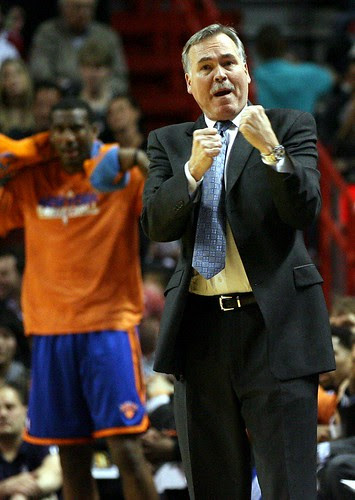 Mike D'Antoni prepares to play the Cowardly Lion in the team's production of The Wizard of Oz
Ready for another night of terrible games? Yeah, me neither. Let's watch embedded videos to ease the pain.

A big thank you to the guys at The Basketball Jones for sharing this clip someone submitted to them with the world. This is one of the greatest videos ever. Stan van Gundy hates Turkoglu!

Ball.
Want to see the best thing Rick Reilly has done in a decade? Watch as he dunks on a Pop-a-Shot.
It's like the world's lamest episode of Jackass
Something I learned today from this article on Yahoo! about bogus celebrity health tips: Alex Reid is fantastically misinformed.

One of the highlights for SAS was a tip from cage fighter Alex Reid, who told The Sun tabloid newspaper in April that he "reabsorbs" his sperm to prepare for a big fight.

"It's actually very good for a man to have unprotected sex as long as he doesn't ejaculate. Because I believe that all that semen has a lot of nutrition. A tablespoon of semen has your equivalent of steak, eggs, lemons and oranges. I am reabsorbing it into my body and it makes me go raaaaahh," he said. 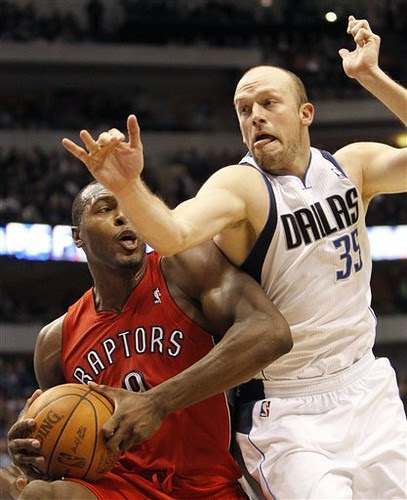 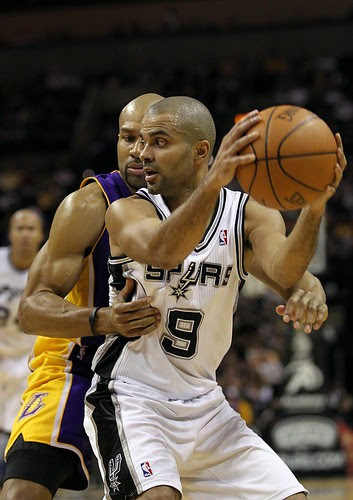 Getting a little personal there, Derek 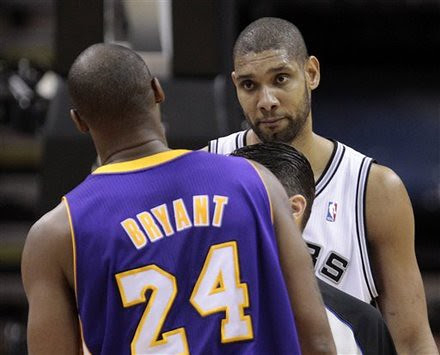 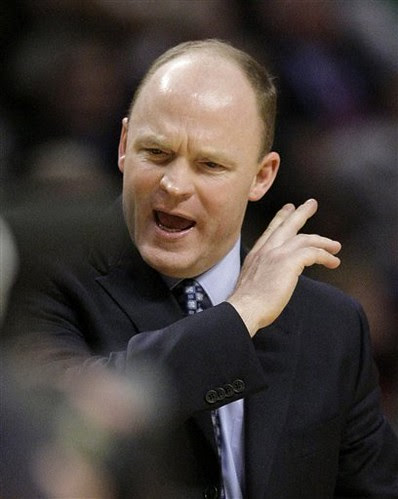 "Do I need to introduce your face to the back of my hand"
Nationally Televised Games:
Jazz at Clippers, NBA TV, 10:30pm: According to ESPNResearch, "NBA off to best regular season start ever. ESPN & TNT ratings up over 30% from last year." And yet thanks to college football bowl season, ESPN is not airing any Wednesday or Friday night games this week, and the only national game tonight is a goddamn Clippers game on NBA TV. Way to say "thanks fans," NBA.

All The Other Games:
Warriors at Hawks, 7pm: Golden State is on a three game winning streak. What? No. That's not possible! There must be a mistake! Oh, wait, they played the Purple Paupers, Frail Blazers, and 76ers? Nevermind.

Pacers at Wizards Generals, 7pm: Yes, Washington sucks. But Indiana has dropped 6 of their last 8, and all losses were double-digit ass-whuppins, including their most recent thrashing from a short-bench injury-riddled Celtics team. The interest level in this game is somewhere between "watching a Chia-pet grow" and "staring at the back of your eyelids."

Cavaliers at Bobcraps, 7pm: We got a dead coach bounce last game from the Bobcraps. However, consider the laws of physics. That first bounce is always the highest. It will bounce less every time. Good thing they get to take advantage of playing a woeful Cleveland team who will be happy to just get the hell out of Ohio for a few minutes.

Celtics at Pistons, 7:30pm: Some good news out of Boston.

Lakers at Hornets, 8pm: So Kobe's "pissed [mad]" at himself. Does that mean he won't take 30 bajillion bad jumpers in this game?

Nuggets at Timberwolves, 8pm: The Timberpups are riding a two game winning streak, and Carmelo won't be playing in this game. Ruh roh.

Nyets at Thunder, 8pm: The last time these two teams met, we were treated to a triple overtime finish. I really, really, really doubt that we'll see that again in this game.

Heat at Rockets, 8:30pm: Thank God Houston has a basketball team to root for, because their football team is just downright depressing.

76ers at Suns, 9pm: You can't tell me you aren't excited that Vince Carter might make his Phoenix debut in this game. Wait, strike that. You can tell me that you don't care and I'll believe you.

Grizzlies at Kings, 10pm: This game is almost as stupid as this guy.

The Other Chris said...
OK, that Pop-A-Shot dunk was awesome. Much less lame and more entertaining then I was expecting. Well played, Rick Reilly, well played.
12/29/2010 4:16 PM

AnacondaHL said...
I have much alcoholic beverage waiting for me tonight to see Vince in a Suns jersey.

kazam92 said...
I don't know much about Reilly....other than that he hosted the Homecoming thing on ESPN which was actually very interesting (because they had Alonzo Mourning and Wade among others) care to elaborate further?
12/29/2010 4:24 PM

Dan B. said...
kazam92 -- Have you read anything he's written in the past ten years?Dreadful. When he actually tries, he can write good stuff. However, 90% of his efforts are all very formulaic (he has basically 5 columns he continually recycles), and he relies way, way, way too much on goofy analogies. Not to mention his weird obsession with all things tooth-related. Google "Deadspin" and "Rick Reilly" for all kinds of examples.

However, there is also this. Reilly hasn't always been a tool and was at one time a good sportswriter, so I can't call him a complete and total waste of human excrement.
12/29/2010 5:02 PM

Dan B. said...
Counter point: Exhibit A for Rick Reilly being waste and excrement simultaneously.

The Sports Hayes said...
Well Kevin Garnett just blew his knee out again, this is looking more like a reincarnation of the 87 Celtics rather than the 86.

Are they ever going to get healthy?

Celtics have lost 6 players during the course of the year to injury and are about to add a 7th...how many bullets can they take before they fall off the Empire State building?
12/29/2010 7:18 PM

Wild Yams said...
Here's the video of KG's injury. That doesn't look good, and I hate to say it but it reminds me of what he looked like when he hobbled off the court in Utah two years ago. I really hope it's nowhere near that serious. CelticsBlog has injury updates up, saying the X-rays were negative and there's an MRI scheduled for tomorrow.
12/29/2010 7:58 PM

Jason D said...
That KG injury really doesn't look good. Here's hoping it's nothing serious. Need the Celtics healthy so they can face LA in the Finals again ;).

Evan said...
That Stan Van Gundy video is an example of why I'd never want to be an NBA coach. You forget how to be happy after all the time spent focusing on how to fine tune your players' mistakes. Have you non-Bulls fans seen Tom Thibodeau? He's NEVER happy.
12/29/2010 8:36 PM

LotharBot said...
The Denver Nuggets were on their 4th game in 5 nights, missing 3 starters and their 6th man (Melo, KMart, Nene, Harrington). They started Shelden Williams and Melvin Ely and gave additional meaningful minutes to Renaldo Balkman and Gary Forbes (essentially running a D-league frontcourt.) They're a terrible road team (4-10 coming in.) And they trailed by six at halftime. They should have lost by 25.

WoTN goes to their opponents, the Minnesota Timberpoops, who did what bad teams do and found a way to lose. Highlight plays include 19 Wolves turnovers, Pekovic making an appearance in a Renaldo Balkman poster, Kevin Love (6'10") getting a jump ball vs Ty Lawson (5'11") and tapping it right to Nuggets guard JR Smith which led to another Balkman dunk, not putting any hands in the vicinity of Chauncey Billups' face leading to 6-6 shooting from downtown, and fouling so much that the Nuggets got 43 free throw attempts. If I had to write a blueprint for how to lose to a tired, shorthanded team, this would be my starting point.
12/29/2010 9:54 PM

Wild Yams said...
Good news - apparently the injury to KG is to his calf, not his knee. No word yet on how serious it is, but supposedly it's not something to panic about.

The Lakers took a step in the right direction tonight (reinserting Bynum into the starting lineup seems to have helped), but they're gonna have to play with a good stretch of consistent basketball against teams that aren't faltering almost as badly as they have been before I feel like they've turned anything around. Tonight was definitely better though, although Pau's gotta get more than 5 shots up...
12/29/2010 10:10 PM

The Sports Hayes said...
False alarm on Garnett, now it looks like a calf strain instead of a blown knee. The difference in missing a week instead of the entire season.

I'd say there should be Co-WOTN in both the Wolves performance and the Rockets allergy to defense in the 4th quarter.

Nice bounceback win by the Lakers, they needed that big time.

Karc said...
@Mr. Guy - Hornets should be DQ'ed from that. New owners (i.e. the NBA) probably told them to lay down and take a job so that people suddenly get the illusion that the Lakers are fine.

Besides, Mbenga and Ariza probably put up some lacktion as a post-ring thank you to Bryant. I doubt Lamar Odom is going to shoot 10-15 again (this is the one great game usually followed by four mediocre ones). This was an aberration, at best.

Bing said...
A quiet yay for the Lakers today, can't cheer too strongly when beating a sub-par squad.

Wow. Dirk Nowitzki is the goofiest person I've ever heard on the air EVER. (Yes- I said "ever" twice in ONE SENTENCE- that's how goofy he is).

chris said...
The only comment that needs to be made on tonight's Kings-Grizzlies game, from my Twitter:

kazam92 said...
http://www.youtube.com/watch?v=eP2dvmEUvJ8&feature=player_embedded Amazing the worst team in the league has the absolute shot of the year. Utterly astounding. I'd hate to be a Grizz fan
12/30/2010 12:06 AM

plonden said...
WotN: Tyreke Evans. Now hear me out... Check out the 0:43 mark of this video. (http://www.youtube.com/watch?v=eP2dvmEUvJ8&feature=player_embedded). I'm pretty sure he leaves his own mother hanging and nearly fucks her up. She comes in for a hug from stage left at 0:43 and throws up her cane to embrace her son and congratulate him on his big game winner at home. His teammates encircle Evans and start giggling and rough housing (read: man love), almost knocking her on her ass. This being the mother who recently inspired 'Reke to not get elective laser surgery to correct his plantar fasciitis, surgery that would sideline him for months, and to suck it up and play basketball instead (http://www.sacbee.com/2010/12/28/3284478/evans-weighs-foot-procedure-as.html).
12/30/2010 12:37 AM

greggrant said...
To that van Gundy-clip: It's not against Turkoglu; he had just the same expression on his face when Redick buried that sideways-falling long jump shot from the top of the key over Allen at the end of the ballgame. I remember that oh so well because that was just wierd to see - it was as if he rooted for the Boston Hectics.
12/30/2010 4:26 AM

AnacondaHL said...
I heard the woman with the cane was Tyreke's grandma, but IDK.

That ending was really bittersweet. A meaningless game made meaningful for that great crowd. Another loss made into a win. Eventual speeding tickets to ensue. Maybe I'm just sad because the Suns may never win a close game on a buzzer beater this entire season. 8-20.
12/30/2010 8:38 AM
Post a Comment
<< Home
Subscribe
RSS Feed
Mailing List