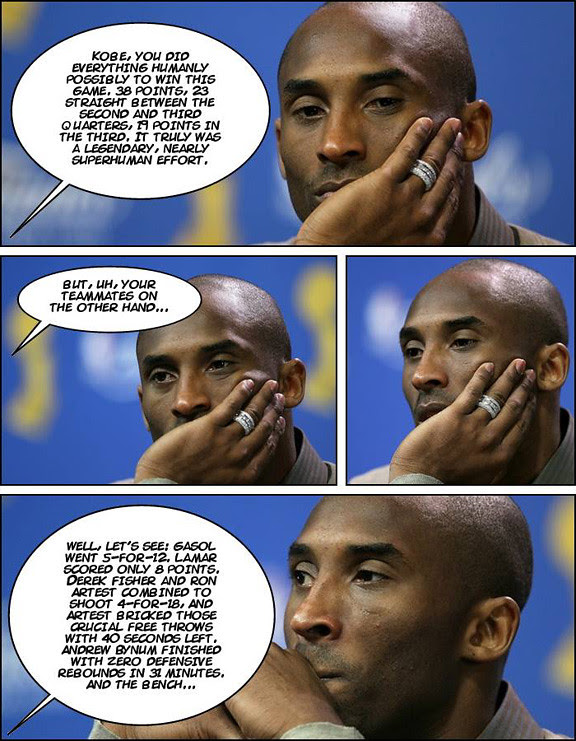 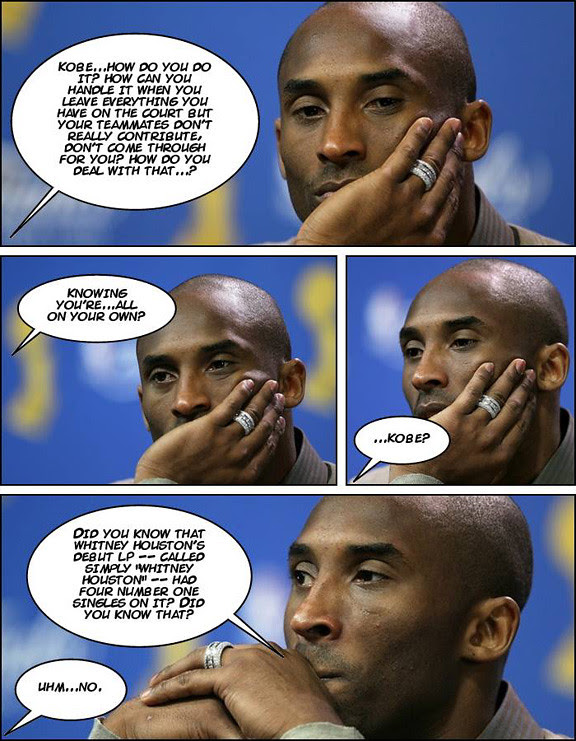 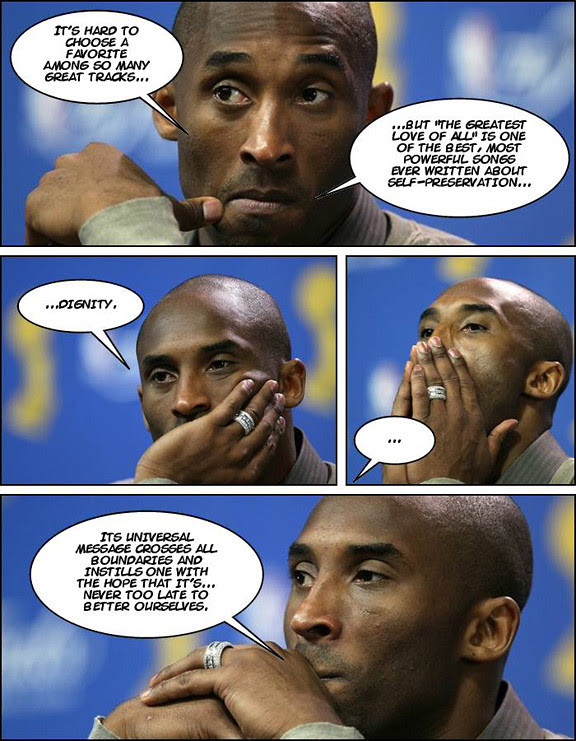 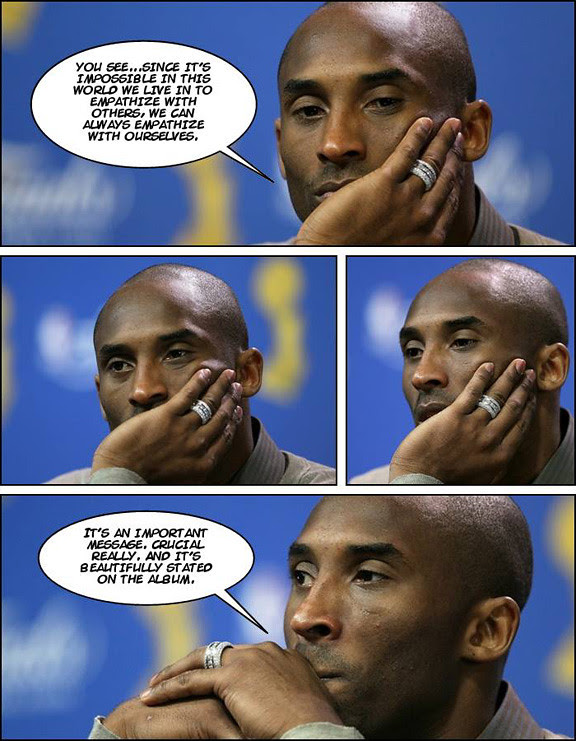 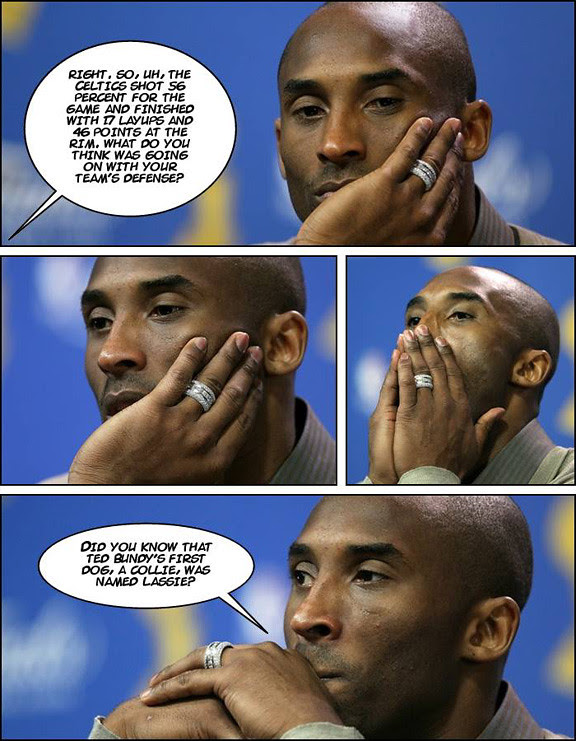 This post was made in honor of Patrick Bateman.

Basketbawful said...
Kobe's inner monologue during this comic: "I have all the characteristics of a human being: flesh, blood, skin, hair; but not a single, clear, identifiable emotion, except for greed and disgust. Something horrible is happening inside of me and I don't know why. My nightly bloodlust has overflown into my days. I feel lethal, on the verge of frenzy. I think my mask of sanity is about to slip."

Anyhoo, it's 9:00 EST, you know what that means: time for Stern's giant "fuck you I'm pulling the plug on the Kobe bitter stories and ending it now, say your thanks Better Off Ted!"

Main official Monty McCutchen, highest fouls per game this season, but strongly favors Boston over LA. Still sporting a 83.3% home win% this postseason though. Looks like he stole the last cookie from the cookie jar.

Crew official Joe DeRosa, most inconsistent ref (via standard deviation), also calls high fouls on LA and favors Boston. Yes, it's the dude that threw a ball at a fan, though that might actually make him more awesome and less a sucky ref. Looks like the definition of disgruntled.

And everyone's favorite, crew official Ken Mauer. Most technical fouls called, about even favoring of LA and Boston, but you all know when he gets that look in his eye, trouble's a'brewin'. Looks like he'd sell you used car parts at an offer you can't refuse.
6/15/2010 8:43 AM

Unless I'm really misreading those links - and I might be! - once adjusted for fouls per game, those refs all look even handed in terms of Lakers vs. Celtics. Looking only at the 2009-2010 stats, Ken Mauer actually looks lopsided in favor of the Lakers. If I'm reading it wrong, please let me know.

AnacondaHL said...
Medrawt - Right, so you have to look at what the Lakers and Celtics averaged this season and postseason. The Lakers are a low foul team (cough most 1-superstar teams are low foul teams cough Cavs cough). Ugh, something in my throat. Anyways, Celtics averaged 22.1 PF/g regular season, 24.7 postseason. Lakers averaged 19.4 regular season, 23.7 postseason. So there was a large skew from Games 1 and 2 of the Finals, but the fact that these guys can call 24 fouls on the Lakers per game is pretty important. And, the Celtics are already comfortable with the high fouls called on them and high foul games, so it's going more against the Lakers anyways.

The second thing to look at is the home margin fouls called (HM). So how helpful each ref is at helping home court advantage when a team plays, negative number helping the team and positive against. So all three refs managed to call less fouls on Boston vs opponents, and more on LA vs opponents despite home court advantage. Pretty crazy.

Sorbo said...
AnacondaHL: Really, you went there that quick?

I like the under on point total, because of all your reasons.It will be like Game 3: sloppy, choppy, few guys with legs, and plenty of whistles. Although the whistle may be partially from the players being tired and partially from the refs/Stern wanting a Game 7.
6/15/2010 9:49 AM

Basketbawful said...
Yeah, I hear Vujacic was into the whole Yale thing.

AK Dave said...
The last factor is how tired they are. If Ray continues his 3pt fecal matter, and KG's knees can't show up due to travel fatigue, it won't matter even if the refs are gift-wrapping it to them.

It seems like Doc has figured out that he has 6 whole other people sitting on this little piece of wood on the sidelines. What's more: Doc has learned that if he puts one of these other bodies in the game, his starters can REST, and their energy can even change the game!

Anywho I think if Davis, Wallace, and Robinson all get a fair number of minutes, fatigue shouldn't be an issue.

Also: the celtics are 1-0 in games in the finals where Shelden Williams plays. Coincidence? I think not! Play Shelden!

...at this point, the only player I think a lack of rest will effect is Bynum, and only because of the type of injury he has.

Sorbo said...
Just watched Nintendo's E3 presentation and saw a new Mario game, which has Mario & friends playing basketball (and other sports). After watching the trailer,I have to say that Luigi doesn't get his teammates involved enough. The other team is also playing iso-WaLuigi. Sort of boring to watch.
6/15/2010 12:33 PM

Cortez said...
"After watching the trailer,I have to say that Luigi doesn't get his teammates involved enough."

Good one. I was thinking the same thing!

Dylan said...
Agreed on the fatigue. Bryant has shown that he simply doesn't get tired, and the Boston players get plenty of rest during games, and I'm sure Doc doesn't exactly work them hard between games. Bynum's knee is the only thing affected by time off.
6/15/2010 2:32 PM

Sorbo said...
Yeah, I'll keep comparisons to WaLuigi and WaJordan to a minimum.

For World Cup fans of this site, Slate.com has started a flopping feature called the "Dive of the Day." Bawesome. Here's the first one:

AnacondaHL said...
I don't buy that Doc knows wtf to do with bench rotations. Has Ray Allen played less than 40 minutes after his 8 3ptr game? And I don't buy that a quick travel game will not affect the Celtics in their 105th game of the season. And I still buy stars on the road, bench at home, so I'd expect minutes distributed similar to Game 5's for the C's.
6/15/2010 2:53 PM

AnacondaHL said...
Aaahahaha Woj reports Sarver just undercut Kerr asking him to take less money, and ValleyoftheSuns reports Kerr is out as GM of the Suns. With all the sunshine and palm trees and hot chicks in Arizona, how could there be such an unfun tightass owning this team? It's all the damn Republicans flooding in escaping from California...
6/15/2010 3:39 PM

Anonymous said...
You know what would improve every Kobe presser: vuvuzelas for everyone!

Anaconda - If only Republicans were really leaving California. Every political sign in my neck of the woods was touting "true conservative values."
6/15/2010 3:48 PM

AK Dave said...
I don't buy that Doc knows wtf to do with bench rotations.

Really? I mean its true that he leaned really hard on the starters in games 1-3 (plus the rest of the playoffs), but the last two games, he seems to have developed a little trust in Donkey, allowing Doc to rest Allen or Rondo, and establishing an 8-man rotation (Wallace, Bib Baby, Donkey off the bench).

I guess we'll see. I'm as surprised as anyone that Doc has actually done some coaching (at least it seems that way) in the last 2 games. But its really payed off to have the bench come out and play significant minutes, so I'd be surprised to see him change strategy.

And I still buy stars on the road, bench at home

Word, word. I won't argue that that is the general rule. But in game 2, the Boston bench put up a solid 34pts on 9-23 shooting, so to me, Boston has shown that their bench doesn't just whither and disappear on the road coughLakers!cough.
6/15/2010 3:51 PM

Gabe said...
Wow, I wonder what the odds were of Kerr getting ousted as GM once the season ended. 100-1? This is bizarre.

And continuing the commentary from yesterday's thread, looks like Skip Bayless and Ryan Stewart (I think, whichever one is the younger Stewart) on 1st and 10 agreed with me completely on Kobe Bryant's leadership qualities, or lack thereof. Vindication! Sort of.

Will said...
Gabe- no offense, but I wouldn't be using Skip Bayless for evidence of anything. Other than the fact that ESPN is dedicated to hiring anyone, even the mentally handicapped.
6/15/2010 4:32 PM

Gabe said...
I disagree Will. Skip says some crazy and wild things sometimes, but he's often closer to right than any other analyst out there. Nobody's going to be right all the time because its sports, and its very unpredictable. But he's one of the best and most reliable. That might be the same thing as being the tallest midget considering who else ESPN has, but it counts for something.
6/15/2010 6:10 PM