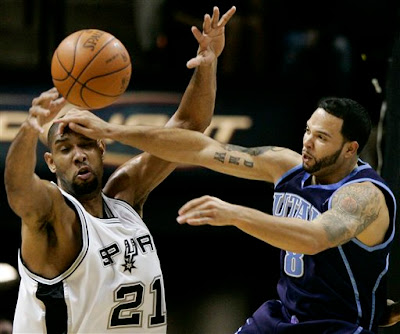 Note: above image is 23.9% more humorous when
accompanied with this sound effect.

Amare Stoudemire: If you are wondering how the Suns gave up a fourth quarter lead and lose to the Charlotte Sting Hornets, you can point the finger at Sun Tzu. Amare Stoudemire ended with 23 points, but with only five boards on the night, he was out-rebounded by Darius Songaila (7) and Devin Brown (6). By no coincidence, the Suns were clubbered on the boards 38-56. Add 5 turnovers to the mix and Amare gives us the worst plus-minus of the game (-11). And Amare's chicken? It was smothered.

Grant Hill and Channing Frye weren't much better. When they aren't scoring (and they weren't, 8-26 shooting) they comprise a sieve-like defensive combination of age and softness. Enter Peja Stojakovic, who is in a 10 ppg, 37% FG slump to start the season. Stojakovic realizes this and licks his chops, or whatever a guy like Peja would lick in this situation, and proceeds to drops 25 points and seven 3s.

Misguided Overconfidence: After starting 3-7, the Hornets have put together a mildly promising 2-1 win streak. But before you declare the Hornets comeback "official" and dust off your Rex Chapman jersey, realize that the Dead Coach Bounce and the Wounded Tiger Theory are both in effect. And yes, these are stackable.

Update! Chronic Loserization: As AnacondaHL pointed out, "The Suns have now lost 15 straight games when televised on TNT. As an East Coaster, seeing as how TNT provided most of my live Suns coverage, it now makes more sense, these feelings of pessimistic fandom." Since we all know the Knicks are the Brooklyn Brawlers of nationally televised games, does this make the Suns the Iron Mike Sharpes?

Forgotten Suckitude: The Jazz got their first road win against the Spurs in ten years. Time to party like it's 1999! And by "party like it's 1999" I mean listening to the timeless sounds of Smash Mouth, watching the President almost get impeached over a blow job, and wondering when Howard Eisley and Jacque Vaughn will steal old man Stockton's starting job.

Michael Finley: Coughed up an 0-for-6 shooting night, along with one board and a plus/minus of -12 in 23 minutes of lacktion. Now is a good time to point out that Finley is the oldest player on one of the league's oldest teams. Since Parker and Ginobili are both out, next time they ask Finley to pick up the slack, they should give him a Reach Grabber. Right after they install a chair in the locker room showers for him. I wonder if he calls dinner "supper"? Ok, I'm done.

Luol Deng: fell back to earth in spectacular "we should have totally traded you for KG" fashion against the Lakers. Six points on 3-for-11 shooting in 36 minutes. The Bulls could have used his barrage of 18-foot jumpers, since the rest of the guys looked not-quite-as-bad-as-usual on offense (48% shooting, 24 assists and 12 turnovers). Up until this year, Ron-Ron calling himself a "defensive stopper" held about as much credibility as winning a Slammy. But this year, the Lakers are a full 16 points better on defense with him on the floor, not including the above Ron Mercer-like night he forced out of Luol Deng. Speaking of..

Ron Artest: Artest apparently made amends with John Green, the Detroit fan that threw the cup of Diet Coke that led to the damndest thing anyone has ever seen at a live sporting event. Since then, the Pacers franchise is now synonymous with thug athletes and bad attitudes, despite a jersey change and a complete roster house-cleaning since 2004. Attendance is down 15% and there are talks of the team relocating or folding. But as long as Ron Artest and some guy in Michigan feel better about the mess they created, that's a relief.

Update! Lacktion Report: My bad for forgetting to forward Chris' lacktion report to Statbuster. Maybe I should include myself in the report? -Basketbawful

Suns-Hornets: Jarron Collins took a board in 4:38, only to foul twice and lose the rock once for a 3:1 Voskuhl.

Jazz-Spurs: As Jerry Sloan's team finally won in San Antonio for the first time since the Alamodome was remembered, Kosta Koufos celebrated as the human victory cigar with a +2 suck differential via foul and turnover in 3:49, also counting as a 2:0 Voskuhl. Kyrylo Fesenko's 11:18 stint as starting big man produced a steal, board, and two assists - but also generated four fouls and a giveaway for a 5:3 Voskuhl.

Bulls-Lakers: Sasha Vujacic machined multiple bricks - three from the Library Tower to be exact - to annoyingly add a +3 in 4:34 to the ledger!!!

Anonymous said...
While airballed free throws are hardly anything new or exciting, I want to nominate DeJuan Blair's airballed free throw (didn't even touch the net) for its symbolism. Five out the Spurs' six losses were very close. Against the Bulls they ran out of gas in the second half of a back-to-back. Against the Thunder they cut it to as little as 2 and missed a game tying desperation 3 by Parker. Against the Blazers, they were down by as little as 5 with 2 minutes left. Against the Mavs they fell in OT to Herr Dirkalicious. Finally, last night, they were in a 1 point game till 1:30 left before once again coming up short. DeJuan Blair's free throw was just foreshadowing what was to come and reminding us of what has been.
11/20/2009 9:01 AM

Unknown said...
I heard during last night's Bulls/Lakers game that Artest and the fan that threw the beer (his name is irrelevant) are going to dinner or something in the future, and that Artest called and apologized. Shouldn't Artest be apologizing and taking the guy whose ass he whipped that didn't do anything to dinner instead?
11/20/2009 9:12 AM

Lucas said...
Howard Eisley? I thought he was that robot sent from the distant future to destroy our civilization with the Y2K bug.
11/20/2009 9:37 AM

AnacondaHL said...
Apparently, while the Utah in SA streak was broken, another lived on. The Suns have now lost 15 straight games when televised on TNT. As an East Coaster, seeing as how TNT provided most of my live Suns coverage, it now makes more sense, these feelings of pessimistic fandom.
11/20/2009 9:40 AM

Basketbawful said...
I cannot believe that STAT played 43 minutes and finished with only 5 boards. It reminds me of what Wilt Chamberlain once said about Kareem Abdul-Jabbar during (I think) the 1985 playoffs: "He's afraid. He's ducking his head. I'm telling you, he's trying not to rebound the ball."

So it's not surprising that the Suns got straight-up bukkaki'd on the boards. NO ripped down a mind-boggling 25 offensive rebounds. 25!!

Look, Peja Stojakovic should never have 13 rebounds (5 offensive) against your team. Never, ever, ever. I know Peja's threes got all the attention, but the Hornets only shot 40 percent overall. It was rebouding that croaked the Suns. Amar'''''''''''e should be ashamed. He should take this personally. CRASH THE BOARDS BIG MAN!!

Speaking of mind boggles...the Spurs are 4-6 after reloading in the offseason. Their big three can't stay healthy. The new guys aren't killing it. This has to be a San Antonio fan's worst nightmare.

In other news, many thanks to Statbuster for filling in for me on WotN a few nights after he cracked my shit up by making Mark Jackson AND Rodney Rodgers references on the ESPN Dime chat I was co-hosting.
11/20/2009 10:50 AM

FarmerTome said...
NarSARSist: Whereas you normally leave intelligent comments, your one about Blair's airballed free throw being a symbol of "closeness" is not very poignant. Usually (as in 100% of the time) an airballed free throw is NOT CLOSE and laughably off by very much. Especially if Blair's didn't even hit the net. Keep up the analogies though.
11/20/2009 11:46 AM

Anonymous said...
FarmerTome - That's true, partially because when I wrote it I got an error, and when I rewrote it, I forgot the words "falling short". That was the imagery I wanted to convey. On the other hand, if a free throw was truly just short of going in, it'd clang off and bounce back higher, which is kind of not what I want to convey. I'll be more careful next time. Or, it clang on the front of the rim, bounce forward and back a little, and then fall out. That seems to be more like what the Jazz are and will be doing. Sometimes they look good, sometimes they look bad, people are unsure of what will happen, but ultimately they'll get bounced out. (Is that any better?)
11/20/2009 1:11 PM

The Dude Abides said...
Mr. Bawful, Kareem was pretty dominant in the 1985 playoffs, winning a Finals MVP against the Larry Birds. Maybe you were referring to Game 1 of the Finals, the Memorial Day Massacre? After that game, in Games 2 through 6, Kareem probably had the best five-game stretch of any 38-year old athlete in any team sport in history.
11/20/2009 1:31 PM

Ash said...
Why, exactly, do you think that Ron Artest didn't "used" to be a defensive stopper. All the great scorers in the league play worse with Artest on them (with the exception of Kobe Bryant, who actually gets up for big defenders rather than only getting up for poor defensive teams like most of the leagues top scorers).

Worth noting above are the lower PTS (points), FG% (field goal %), FTA (free throw attempts), and the higher TOV (turnovers).

This doesn't necessarily mean that Artest was guarding these players every single minute of the whole entire game, it is however a visual tool to see the on-going trend that all these players average when they go up against a team with Artest.

These players are: all down their PTS average -- most below their FG% -- all below their FTA per game -- with a pretty high TOV rate.

James stats across the board from PTS, AST, REB, FG%, 3P%, and even FTA are notably lower than his average, most especially the fact that he struggles with TOV against Artest, practically turning the ball over more so than his average - almost a whopping 2 turnovers more per game.

Anthony seems to be struggling too, and doesn't look to be getting to the charity stripe much when Artest is on him, from 7.7 FTA down to 4.8 FTA while scoring 5 points less per game, not to mention, scoring them at a lower FG%.

Wade on the other hand, has his PTS and FG% down, yet still finds a way to get to the free throw line, averaging exactly the same 9.3 FTA per game.

Roy has found it difficult to consistently find his shooting touch against Artest, with both FG% and 3P% down almost 4% and 9% respectively.

Carter is the only player with a higher FG% than his norm. Also telling is that Carter's 3P% gets a big boost, while his FTA are down nearly a good 2 attempts per game, signifying he likely depends on the long range perimeter shot to get his points against Artest, instead of driving it to the paint and to the free throw line.

Pierce seems to be the only player not too overly affected. His stats against Artest are a little lower, but still consistent with his regular average.

For the sake of fun, here's Artest's numbers comparison against Bryant:

Bryant seems to be the only one with a winning Head-to-Head team record against Artest, as well higher stats across the board with PTS, FTA, FG%, and 3P% average. Yikes! A Black Mamba indeed.