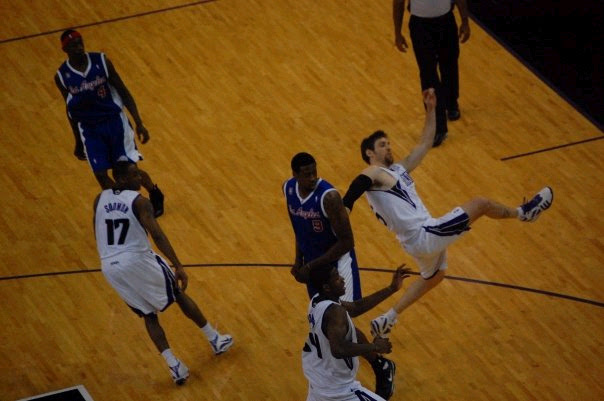 If there's a stampede to see the above dreck at all this season, by that logic,
Michael Jordan has been an executive as competent as...uh...Jerry Krause.
So, the Maloofs are busy chortling in glee as a recent Sacramento Bee article has Mayor Kevin Johnson -- he of the late-80s/early-90s Phoenix Suns -- proclaiming that the NCAA's recent rejection of Arco Arena as a continuing college tournament venue could ultimately help send the purple paupers elsewhere. With the billionaires satisfied at more criticism at the big barn in Natomas, what's next for them to do?

Hmm, maybe spend the money to provide a competitive team to justify the replacement arena at Cal Expo, a site near the region's most congested freeway and most popular shopping mall? Funding the said replacement building themselves, as opposed to hoping taxpayers will fawn over the project?

Instead, I and many others who witnessed last year's lacktion largesse received this helpful email:

"As a valued Kings fan, you are invited to purchase Kings individual game tickets before they go on sale to the general public. Your exclusive presale opportunity begins Tuesday, September 22, at 9 a.m. and ends Thursday, September 24, at 11:59 p.m."

Keep in mind I'm not a season ticket holder or anything, so gee...I must've been quaking in my boots, soooo worried that my upper-deck seat from last year's Clippers-Kings sucktacular is going to disappear if I didn't pre-purchase.

"Be sure to buy tickets early as the selection is limited and the best seats will go quickly! This is your opportunity to share the Kings with your friends and family."

I'm sure those premium seats are being rushed upon right now, you know, those $750 specials they're offering for that Not-Answer visit I am keen on watching:

Yep, you read that right. According to Ticketmaster, these courtside chairs against one of the most promisingly bad squads of the last few years...are priced as if Kobe and King Crab were on the hardwood. Huh!?

Potential consumers are even blessed with a $37 convenience charge, too, putting the final total near $800. But at least that $37 covers the sheer expense of the most awesome CAPTCHA of all time, "thug SO" (the actual CAPTCHA for this ticket search - appropriate for this game, isn't it?).

Still, $800 for some terrible basketball.

And yet the Maloofs wonder why attendance has fallen in a region hit hard by foreclosures and state worker furloughs. Maybe it isn't simply because we don't have an ultra-modern, swanky, luxury box-filled court like the Palace of Auburn Hills...which is exactly the same age as Arco Arena. Woops.

chris said...
James: Of course! It'll be a herculean task, but hey, I was able to track the entire playoffs, so a full season should be just a slight upswing, right? :P

I WILL try to watch that Grizzlies-Kings game in person though, in addition to other potentially terrible matchups in the following months.

Buck Nasty: And yet the Maloofs somehow claim that they "need" a new barn in order to get people out there, or else they will MOVE! TO! VEGAS!

Uh, people were filling Arco like it was the Ritz-Carlton back when the Kings were doing something they have not done since Ron-Ron: make the playoffs.

So every time Mayor KJ or the owners get all uppity about how "mediocre" our arena is, I think it's only fair to remind them that Auburn Hills is the same age. There was no reason to skimp on upgrades during the C-Webb era, only to beg for a new structure now.

(PNC Park in Pittsburgh proves that NO city's populace will simply attend a game just to see a nice venue, if a team continues to suck.)

This reminds me, IIRC, the Maloofs' ballot proposals for taxpayer funding failed around the same time they did a notorious Carl's Jr. ad flaunting their wealth. Whoops!
9/28/2009 4:16 PM

BJ said...
Holy Jesus, are they kidding?!? The only way I'd fork over that kind of money for one game is if I could somehow be in five places at once -- complete with catering, free booze, and oily rubdowns for all five of me. And the game in question featured the cyborg reincarnations of Russell and Chamberlain.
-BJ
9/28/2009 4:48 PM

Marc said...
Arco was rockin in the early 00's. I remember when coaches were complaining that they couldn't draw up plays during timeouts because of all the cowbells.

Brian said...
I looked into going to a Kings/Trailblazers PRESEASON game at Arco and it was ridiculously expensive. The prices were the same as last year's regular season prices. I was expecting a drop in prices this year, but it looks unlikely now. Sac County is at 12-13% unemployment and the Maloofs want people here to pay premium prices for a inferior product... They just want the numbers to swing in their favor to convince the other GMs that Sacramento is not a viable NBA city.

chris said...
Matt: Brilliant! (Of course, in about a week, that will become the most played out meme of the decade...)

BJ: Trust me, I went to the ticketmaster.com site myself and couldn't believe my eyes at that price. I think we'd also require the cyborg reincarnation of Auerbach as coach, and Starbury's career, in order to make that worth $750 + $37.

And maybe a twelve trillion from Damon Jones.

Marc: I get the impression people here in Sactown care much more about a venue with team that's fun to watch, then a building that has the swankiest luxury boxes. (The Warriors down the road prove this point somewhat - the Oracle Arena is the same building that was tired and needed a facelift for what, forty years? Yet they do Nellieball, make the playoffs, and suddenly for a moment it's the best home court in the Association.)
9/28/2009 5:39 PM

Other than that I completely agree. Even when the economy was doing good and the Kings were winning, the ticket prices were ridiculous.

Also I don't know what's wrong with Natomas. If you want to build a new arena fine, but don't build it at Cal Expo. The traffic would be crazy. Natomas is perfect because you have both I-80 and I-5 to the North and West of the building.
9/28/2009 6:02 PM

Matt said...
Until then, Chris, I intend to milk it for all its' worth!


PS that picture is something else! Not sure what the white guy is doing (I wasn't even aware there was an NBA team in SacTown, let alone the names of the players. Except for some guy who goes by the name of Kevin Martin...), but it certainly doesn't look like playing baskeball!
9/28/2009 11:34 PM

chris said...
Matt: Yep, I took that photo from my upper deck seat in February. Andreas Nocioni, the huge return from the Brad Miller trade, was attempting to maintain his balance...but it looked so freaking floptastic! It was one of many demonstrations of non-skill throughout that winter evening.

CassavaLeaf.com: You're welcome. It's strange, I moved to this area just as the team started to get sour...and then really collapse (coincidentally?) after the taxpayer referendum got slammed in the polls.
9/29/2009 2:12 AM

chris said...
49er16: I can understand the desire for a downtown arena in the old Southern Pacific railyards, to get the nightlife down there a little more activity...but if that can't happen (and the Maloofs certainly are not interested in spending their own money to do anything), the facility isn't exactly in a bad spot at all, nor is it in the horrendous shape that the NCAA (and KJ) are claiming. Certainly they could improve the mass transit access to the area - the RT #11 bus line down Truxel Road doesn't even run at gametime - but the structure is sound. Who knows if it'll survive a levee break though, given Natomas's poor risk rating in that regard...though Cal Expo is much closer to the river.
9/29/2009 2:16 AM

Lucas said...
I like BJ's idea above, but with this Wilt instead.
http://www.theonion.com/content/from_print/zombie_wilt_chamberlain
9/29/2009 9:37 AM

Ruben said...
Thanks Chris for tiding us over and finally putting up that Nocioni photo.

"James was a no-show, but Cavaliers teammates Mo Williams(notes) and Anderson Varejao(notes) hung out and partied with O’Neal, who hasn’t settled on a nickname yet in Cleveland."

Why I think I might be reading too much basketbawful: the first thing I thought of when reading this sentence was of Mo Williams' Pubic Symphysitis. Hung out indeed... (from http://basketbawful.blogspot.com/2008/04/mo-williams-has-ouchie-in-his-man.html)

chris said...
Ruben: Any time. I have PLENTY more where that came from. :D

Looks like malcontent is starting to be a common affliction amongst Kings fans, judging by the comments here:

Word of the Day
Previous Posts
But Ceballos had the best music video OF ALL TIME.
Pickup Word of the Day: pickup revisionism
Poster Boy Classics: Shaq
Worst Evers: Team Assists Per Game
The Comeback: Starring Greg Ostertag
Greg Ostertag: "The basketball will come."
The Hall of Fame Speech: Starring Michael Jordan
Stephon Marbury is not gay
The Conversation: Starring A.I. and God
Further proof that God has a sense of humor