No, no, no, Timmy. The correct call was "Right hand Genitals." KG wins. 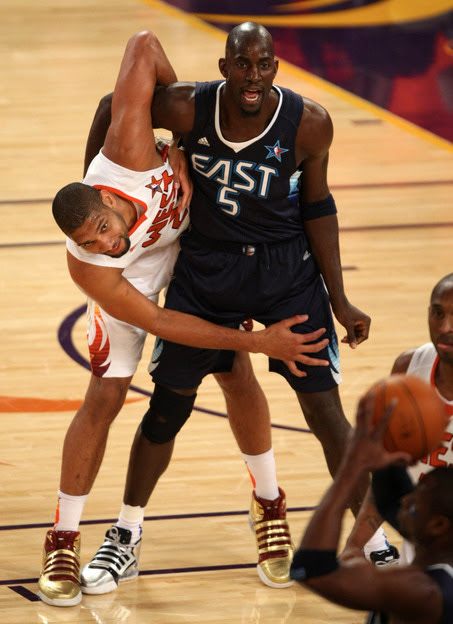 Thanks to Sky Flakes for the picture.

Anonymous said...
Was this the "get tangled up while at the same time try to convince the ref you are not doing anything wrong" part of the allstar game?

Funny thing is even in the picture you can see Duncan's thumb slowly inching upwards in an innocent way, while his pinky is slipping down below the shorts - he's obviously a master of the copafeel

1. LeBron is going to be in the dunk contest next year? I dunno if I believe that. But if he goes through with it he should do a tomahawk slam while wearing a crab suit over DeShawn Stevenson. That would get a 100, especially if he does the "I can't feel my face" move with his pincer.

2. Sager was interviewing Oden on the sidelines. It basically summed up to...

Sager: So how does it feel watching Durant beast while you're here injured again, ya big wimp?

4. I forget who it was, but someone was doing a joke interview with Stern for a couple minutes. Most of the jokes were horrible and it was overall really awkward, but this one cut a little too close and made it all worthwhile:

The guy just went onto the next question, hahaha. So bad it's good.

5. "I have been around 17 years," said Shaq when asked about how he's a mentor for younger players. "I have seen everything; I know everybody. I know the do's and don'ts. A lot of times, guys call me with their problems. I have earned that role. I came in as a young Al Pacino, but I took everybody out. Took everybody out. There is actually one 'Don' who has the same rights I do, and that's Tim Duncan. But he doesn't really want to exercise those rights. He doesn't want people calling him."

6. They showed Bill Russell receiving a giant green cake from the Celtic's big three. Cool. They showed Bill eating the cake like three minutes later. Sacrilege. Or not. But it was kinda weird. Kinda like when they showed Magic eating popcorn a long time ago.


7. A mildly amusing back and forth between JVG, Bree, and Jackson from the Cleveland-LA game (yeah I know, it was awhile ago):

Breen: Big Z hated watching his team play out West while he was rehabbing. To get himself back into shape he was playing one on one with General Manager Danny Ferry. Ilgauskas said Ferry is a very dirty player and he fouls a lot.

JVG: That had to be the slowest game of one on one ever. Danny in his better days was slow. I can just imagine how slow he is now.

Anonymous said...
I like how their shoes are similair.

Dwight Howard's only decent dunk was the one he threw off the side of the backboard, then pounded into the hoop. His first one was only remotely difficult for him because he had to throw himself an alley oop and he isn't that skilled of a passer. The dunk itself was old news; and, he blew it a few times. He got a 50 despite the fact that others (specifically, Rudy Fernandez) were penalized for not pulling it off right away. I'll get to Rudy in a minute...

Howard's second dunk - the 12 foot hoop - would've been more disappointing if he hadn't gone for the *yawn* free-throw line dunk. Honestly, because I expected more out of him, I thought he was going to jump from the top of the arc. That would've been fine by me. But, back to the 12 foot hoop: did anyone else notice how easily he put-back that rebound? I mean, how tall is he? How high can he reach on flat feet? That dunk merited, maybe, a 36. But, a 50? Because he's 8 feet tall and he can jump higher than Yao Ming? Shouldn't the dunk contest be judged by difficulty of dunk?

Cedric Ceballos gave him an infinite-10 on the first dunk. INFINITE!! Now, I dare you to tell me that it wasn't fixed from the beginning. (Don't know what I'm talking about? Look at it again, Ceballos holds a sideways '8' in front of his ten. Now, I know he's famous for the blindfold dunk - a.k.a. not being able to see anything... hint, hint - but, do you really think he accidently held that sideways '8' up there?)

Anyway, I actually liked the whole Krypto-Nate angle and, for real, would do anything for a pair of those shoes. However, Rudy Fernandez had BY FAR the illest, most impressive dunk of the night.

Shouldn't a participant be judged by the difficulty of the dunk? Especially in relation to the participant's size and athleticism? This is why Howard's 12-foot dunk and free-throw line dunk are BORING. This is also why Rudy Fernandez's player-assisted dunk was AMAZING. Think about the size of Rudy, and the size of his hands. Think about how high he had to jump, how he had to catch the ball, then twist his arm/hand around to the outside of it, then pull it back, under the backboard, and up again to slam it. He was penalized for taking so long to succeed. Isn't that just a testament to how difficult the dunk is; and, to how far the player has to reach into his potential to pull it off?

Why would they give him a 42 for that, when JR Smith gave up on his original plan to... have his friend throw it from the bleachers for a mundane two-handed alley-oop? Smith GAVE UP, then GAVE UP AGAIN! And, he got the same score as Rudy's perseverance slam. Yes, I am a Blazers fan. Yes, I have been a Rudy Fernandez fan since he posterized *ahem* Dwight Howard IN A GAME. And, yes, I was touched by the jersey-switch he did to honor the first ever Spanish player (who died a few months into his tenure with the Blazers, right?). But, purely objectively, Rudy Fernandez got the shaft. Not only that, but they made fun of the Spanish and called the judges Russian... what?!

And, finally, it really looked to me like Nate was using his hand on Dwight's shoulder as stability or guidance. I didn't see any obvious muscle flexing in his arm or wrist that would indicate he pushed off the shoulder. I liked it. I do not think he used it as a boost. However, I do not think anything that anyone did was even remotely as impressive as Rudy Fernandez. Done.
2/16/2009 8:24 PM

Flohting Point: I agree with you about Greg Oden. As someone who inexplicably wants to see him do well (sympathy, maybe?), it is painful to watch him on the court - and even worse to see him NOT on the court.

When I dropped him, he enjoyed a 4-game dead fantasy-owner bounce, then went back to his old tricks.

I think the main thing to keep in mind is that, while inconsistent, he is still significantly better than when he was on my fantasy roster.
2/16/2009 8:37 PM

Anonymous said...
chris: i'm ready... except, I don't actually know how to capture the game for posting on youtube or whatever.

I mean, I can tell y'all how it turns out; but, would it be more fun to see highlights?

I'll look into the details of presentation if you can give me the rosters. If anyone else knows the easiest way for me to make video out of my XBOX 360, please let me know.
2/16/2009 8:49 PM

chris: I'm worried that my fantasy curse is all-encompassing in the sense that, if it's a crappy player, and they join my roster, they get better.

I dropped Oden for Brook Lopez who then went on a double-double tear and was getting me 20-something points per game for a bit.


UPDATE: as it turns out, Brad Miller is not a free agent in my fantasy league. I don't think it's worth trading for him. However, I can pick-up Chris Webber and Eric Snow. Think I'm powerful enough to spark a Come-Back Party?

Anonymous said...
"I can't help but feel that if there's some kind of higher, omnipotent power lurking out there, he must really hate the Suns for some reason."

Yams: I actually like the Suns... sadly, my "omnipotent power" is that everything I touch turns to Greg Oden.

[Note: like how I capped the rare quintuple-post by claiming I'm a "higher, omnipotent power?" Me too.]

Anonymous said...
I guess it was a sextuple-post (or, septuple, after this one). Is that what happens when you hit "preview?" It posts it without telling you? Nice.

Anonymous said...
I've got a hankering to read you comment on the Marion - O'neal trade.

chris said...
tony.bluntana - If you have a point-and-shoot digital camera with video mode, you could easily capture the lacktion (in extremely low quality!) that way and then put it up on YT for us hardcores to enjoy. :D I do wonder if there's a way though to capture the video straight from the TV and save that as an AVI...that'd probably result in higher-quality mediocrity.

Now the question would be who should make it to the final East and West rosters, of which some obvious choices (Tarence Kinsey, Mario West, Jake Voskuhl) pop up in my head at lightning speed. Probably easiest to just select a starting five for each and have them "play" the whole game, though having bench guys in a lacktion non-spectacular would truly be befitting of what the exhibition's all about!

And with real-life lacktivity occuring in Phoenix, this is probably going to be the most appropriate tribute ever.
2/17/2009 12:27 AM

chris said...
After the bafwul getups of the last few weeks (Szcerbiak! D-Wade!), we're going to have to have a Bawful Worst Fashions post at some point, because apparently clown ties and Scrappy Doo tats have become a substitute for class.
2/17/2009 12:31 AM

chris said...
AND, speaking of bad fashion...apparently the bawful 1995 ASG-in-Phoenix uniforms made their return in the celebrity challenge? yikes.