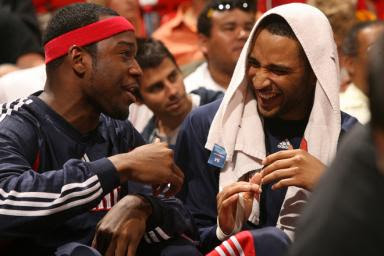 Mario (mar'-e-o') noun. Denotes those occasions in which a player logs less than one minute of playing time and therefore fails to compile any meaningful statistics.

Usage example: Not surprisingly, Mario West was the 2007-08 league leader in Marios.

Word history: The word was coined yesterday -- May 5, 2008 -- by an anonymous reader who couldn't help but notice my season-long quest to point out Mario West's many sub-minute performances. "I think a trillion that doesn't even make it to the one minute mark should be officially nicknamed a 'Mario.' Trillions may be embarrassing, but a Mario makes you wish you became a car salesman."

The suggestion was absolutely brilliant, and sure beat the unofficial "sub-minute men" designation I had been using.

Additional information: Poor Mario. The guy appeared in 64 regular season games and averaged around four minutes per. He saw so little PT that there are only two pictures of him on his Yahoo profile page...and both of those photos show him on the bench sporting crisp, clean warmups.

All I can say is, that's some damned cruelty on the part of Atlanta coach Mike Woodson. Forget free Darko...free Mario!

Update! Basketbawful reader Phenomenal Cosmic Power provided more fan brilliance with the following braingasm: "Might I suggest that a <10-second game be called a SUPER MARIO!? And then, what if 2 or more players each logged a Super Mario? SUPER MARIO BROTHERS?!" All I can say is: Done and done.

More additional information: Mr. Cosmic Power has taken a real interest Mr. West. An unhealthy interest, perhaps? That's not for us to judge. "I felt a litte bad for our boy Mario, so I dug up some more stats that I hope will cheer him up!"

"Wow. Talk about a direct correlation between Mario's playing time and the Hawks winning! I kid you not. FREE MARIO!"

Joe said...
this is a great WOTD because it clearly can be used over and over again. i look forward to seeing it in future posts!

Joe said...
i felt a litte bad for our boy mario so i dug up some more stats that i hope will cheer him up!

AnacondaHL said...
For proper documentation, it's time to officially induct the "Isiah" as a word of the day, meaning "a front office or coaching action so indescribable, it only leads to stunned silence and a facepalm from witnesses of it."

Usage: "Sarver was pulling an Isiah by signing Marcus Banks" and "Is Chris Wallace trying to become the next Isiah?"

The sad part is how the usage already feels comfortable, and that his list of atrocities is so grand I can't even bring myself to post a link to his Wikipedia page.
5/06/2008 11:49 AM

Anonymous said...
mario west is a better defender than half the losers you praise on your site.... dude is an undrafted walk on who made the team in camp because he defensively shut down everyone in camp. he didnt even have a scholarship to ga tech, he walked on there too!!! you should be praising this dude for the work ethic to make it this far without agents, nike, mcdonalds all american games, etc...he is just used for defensive purposes when you sub offense for defense at end of games. this dude is a local kid who made his hometown NBA team by the old fashioned way of blood, sweat, and tears.. let me be the first to say congrats mario for making the team and also for making $427,163 for minimal work... you can hate but mario is making almost half a mil to hang out and play basketball with his buddies..now that is the american dream.
5/06/2008 2:50 PM

Anonymous said...
I actually think he has a great job. I would gladly changes places to make coin & sit on the bench. My coworker says that the best job in the world is the 3rd string NFL quarterback. Get paid more than most of us schmoes, never have to take any hits. Just work out & hold a clipboard. I'm down for Mario. Sign me up. :)
5/06/2008 3:10 PM

eljpeman said...
Maybe we could extend the word usage to denote the number of seconds of lack-tion as "marios"? It seems that the word "seconds" doesn't cut it anymore.

Anonymous said...
I suggest another Word of the Day: "Collins".

As in "doing a Collins". It's a more than due homage to the wonder twins of the NBA, Jason and Jarron, and their uncanny ability to log in huge minutes while scoring no points and having little other statistical impact.

Usage example: "Keith Bogans did a Collins last night for the Magic, by scoring no points, 3 rebounds and 1 assist in 26:36 minutes of lack-tion."

CassavaLeaf.com said...
Poor Mario LOL
but you have to admire the guy for trying
Imagine if he went to Stanford and studied
Comp Sci
he'd be Sergey West
10/21/2009 9:29 PM

vince said...
for those who love to keep track of minutes:

chris said...
For the record, it's January 13th, and Mario West is on DAY TWO of a 10-day contract - and earned 12 minutes of playing time against the Washington Bullets!!!!

I just hope the Atlanta Spirit group that runs the team there will take a few minutes away from ignoring the needs of their Thrashers NHL team and remember to keep the overalled plumber as their lacktator of note.
1/14/2010 12:09 AM
Post a Comment
<< Home
Subscribe
RSS Feed
Mailing List