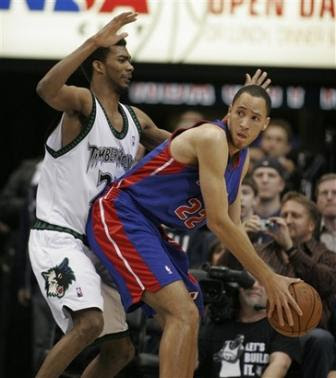 Carlos Arroyo: Where's Jameer Nelson when you really need him? Carlitos was an Albatross on offense (zero points, 0-for-5 shooting, 4 assists, 2 turnovers) and had his lunch eaten by Mo Pete (19 points, 7-for-9 shooting, 6 rebounds).

Dwight Howard: From Odenized: "The announcers bring up a good point. Dwight Howard is a threat to everyone's health: Tony Battie, Jameer Nelson, Brian Cook (broken knuckle yesterday), and now Chris Paul! Is Dwight Howard a player assassin?" Watch the video and decide for yourself. (Hint: The answer is "yes.")


Mike James: Hey you! Yeah, Mr. DNP-CD, you! How's it feel down there at the end of the Hornets' bench? But you'll always be able to relive your glorious 20 PPG season at basketball-reference.com. So you have that going for you.

New Jersey Nets: Uh, somebody needs to tell them that playing defense is part of making the playoffs. Actually, don't bother. It's probably too late, anyway.

DeSagana Diop and Trenton Hassell: Diop -- whom I've been asked to refer to as "Lasagna Slop" -- had a face-rocking line of zero points (0-for-0) and one foul in three and a half action-intolerant minutes. But at least his name isn't "Trenton." Hassell played only 36 seconds and contributed nothing but a turnover. Dallas is only 1550.78 miles from East Rutherford -- according to Mapquest, anyway -- but it's never seemed farther away. For them at least.

The "Detroit Pistons": My first instinct is to say that the Minnesota fans didn't pay to see a starting lineup that included Rodney Stuckey, Jarvis Hayes, and Theo Ratliff. But then again, after what they've been through this season, that group probably looked like the Eastern Conference All-Stars.

Minnesota Timberwolves: They choked up a 21-point second-quarter lead and eventually lost 94-90 to the "Pistons" despite the fact that Chauncey Billups, Rip Hamilton and Rasheed Wallace didn't even play. Oh, and they let Rodney Stucky play "Fourth Quarter Assassin" by dropping 12 of his career-high 27 points in the final stanza to steal the win.

Craig Smith, quote machine: The T-Wolves forward said: "We’re very disappointed we let this one go. We really beat ourselves by letting them back into the ballgame." No arguments here. Although I think you should have mentioned that your 2-for-10 shooting probably contributed to your team's collapse. But maybe I'm just picking nits. I mean, Ryan Gomes (3-for-10) and Rashad McCants (1-for-9) were just as guilty as you were.

Zach Randolph: I couldn't not mention this: New York's "big man" blocked his 13th shot of the season last night. In 61 games. Holy Christ. You'd think somebody his size would wander into that many blocks by accident. But Isiah wants you to know that Zach wasn't close to being dealt at the trade deadline or anything. As far as anybody knows.

Donnie Walsh: Hey, he doesn't know what the future holds, okay? Wait, what?! He is getting hired by the Knicks after all? Which means he was probably interviewing while still working for the Pacers? No way. I'm shocked. Shocked I tell you. Actually, I kind of am. I thought Walsh had a little more class than that. But then again, Indiana has become a black hole for class the last few years, sucking it into some kind of parallel dimension where it's ritualistically tortured and destroyed. So okay, I'm not shocked anymore.

Larry Hughes: The line: 2 points, 0-for-6 shooting, zero rebounds, zero assists, 1 turnovers, and a "game over" benching with 7:08 left in the third quarter after he blew a layup and clanked an 18-foot jumper on consecutive possessions. Ben Gordan might not be smiling on the outside, but I guarantee you that he's smiling on the inside. (Although, based on Ben's 9-point, 3-for-8 shooting night, he really shouldn't be.)

Update! Benny the Bull: This just in from TrueHoop. The Chicago mascot sniped Kevin Garnett and James Posey from behind with a t-shirt cannon during the closing minutes of the Celtics/Bulls game. According to the Boston Herald report: "Garnett initially had to be restrained by a member of the officiating crew as Benny stood a safe distance away." Huh. What happens when a mascot pees themselves in terror? I guess we'd have to ask Benny that question today. This incident would have been a little more surprising if Benny hadn't gotten into a fight on The Jerry Springer Show earlier this season. Kudos to Posey (even though he sucks) for finding some humor in the situation. "I don’t know. I feel threatened. I don’t feel safe. They really have tough love here, but it was definitely an inside job. They made the mascot do it. I got hit in the back walking away. That spot on my back is sore. I might have to get treatment on it." Of course, I'm only assuming he's kidding.

Doc Rivers: I'm not saying he shouldn't be playing his big guns at all, only that he should try to work a little more leisure time into their schedule. I mean, that's why Danny Ainge signed Sam Cassell (14 minutes) and P.J. Brown (DNP-CD) for, right?

Golden State Warriors: You guys do want to make the playoffs, right? Because last night's banana peel slip against the Spurs makes me think you have a fishing trip planned. That's slightly unfair -- after all, they already have three more wins in a more competitive conference than they finished with last season -- but still. Their offense went wrong (37 percent shooting, only 8 assists to 13 turnovers), they got gangbanged on the glass (54-37), and the Spurs shot their defense full of wholes (55 percent from the field). The sad thing is, you can't exactly say they played badly, because they stuck to their usual game plan...it just didn't work. Let's face it, the Warriors live and die by a certain philosophy (a.k.a., Nellie Ball). And with the way these Western Wars are going, it looks like their headed for the "die" part.

Raja Bell: Let me put on my Hubie Brown mask. "If you're playing for a seven-deep team on the second night of an exhausting back-to-back series with a fast-paced team like the Denver Nuggets, and there's playoff positioning at stake, you cannot afford to get yourself thrown out of the game. It's careless and irresponsible. Your team needs you." Seriously, Raja. WTF?! Just for fun, and in case you haven't seen it, here's The Raja Flop.


Phoenix Suns freethrow shooting: I'm not even going to comment on the home cooking that may or may not have (it did) led to the Nuggets 47-26 advantage in freethrow attempts, but I will mention that the Suns missed 12 of the foul shots they did get. Yes, I'm looking at you, Shaq (2-for-9).

Tracy McGrady: T-Mac great game (32 points, 7 rebounds, 4 assists) ended the same way so many of his other great games have ended: With McGrady gonking a buzzer-beating jumper that would have won the game. (It's probably also worth mentioning that he shot 12-for-31 and had 5 turnovers.)

Reggie Theus, quote machine: After his Kings beat the Rockets and damaged their chances of winning the Western Conference, the Sacramento coach said: "It’s nice that we can play a role in the Western Conference. The guys understand we have a role to play. If our role is to muck it up, that’s what we’ll do. It gives us something to play for and it’s a big win for us down the stretch." Wow. Way to aim high, Reggie.

Update! Damned fools: More breaking news from TrueHoop. Okay, seriously...who gets into a fight at an autograph session? Rashard Lewis fans, apparently. Lewis and his family were taking in a show at the Medieval Times in Kissimmee when a group of teenagers asked for his autograph. One thing led to another and a "mini-riot" broke out. The police were called and they soon restored order. Fortunately for everyone involved, the only casualties were a cell phone and a camera memory card. Nobody got arrested. Lewis said he was only trying to give his fans some love. "I was just trying to be a nice guy." That'll teach him that nice guys finish last in Medieval Times mini-riots.

Drake said...
I'm confused. What did the Dallas to East Rutherford remark have anything to do with Detroit and Minnesota?
4/02/2008 1:08 PM

Basketbawful said...
james -- If I can get a picture of that smile, I'm going to have it plastic surgeried onto my face.

shrugz -- Go with the chicken alfredo.

Anonymous said...
You forgot to add Jim Boylan for keeping Tyrus on the bench for so so much of the season. Yes Tyrus makes a lot of stupid mistakes (like yesterday's foul 8 seconds into the game). However he is the only player on the Bulls who wants to be the man. Yesterday he put 24 points and did not back down from KG. If only Hinrich, BG, and Deng played with that passion.
4/02/2008 2:06 PM

I love to keep a record of plays like this when Shaq advocates try to say Shaq could be an effective player even without the overwhelming size. ummmm, No he can't.

Ryne Nelson said...
This Rashard Lewis news irks me on several levels: 1) Why was Rashard Lewis at a terribly cheesy Dungeons and Dragons tournament reenactment? 2) Who would fight over his autograph? 3) That camera probably had the best pictures known to mankind...and was destroyed!
4/02/2008 3:28 PM

stephanie g said...
OK, this might be too late but I'd LOVE to see a clip of KG doing his tiger thing against the Hornets a couple games ago. You know, this deal:

I'm not sure if I've ever seen something so bizarre take place when the ball was live. He just got on all fours and started to pound the ground with his fist and the crowd went freaking insane while his man just dribbled the ball and looked down at him like "What do I do now?" Surreal.

Unknown said...
47-26 sounds bad as a free throw ratio between teams, but 10 free throws came in the last two minutes. Six of those came when the Suns were purposely fouling. The call can go either way, and being the non-bias Suns fan I am, I have no issues with saying that this, to me, looked like a decent called game.

Unknown said...
Lewis and his family were taking in a show at the Medieval Times in Kissimmee when a group of teenagers asked for his autograph

Wild Yams said...
flohtingPoint, you really think the Suns are "gearing up for a first round exit"? Odds are looking like they'll be the 5th seed with HCA over Utah in the 1st round, and I'd have to give the advantage there to Phoenix. 2nd round vs either New Orleans, Spurs or Lakers would be significantly tougher, but I think they can beat Utah in round one, especially if the Jazz have to play 4 road games.
4/02/2008 5:27 PM

Unknown said...
Wild Yams, I really do doubt the Suns capabilities to duel with anyone in something other than a one game series, which doesnt exist.

Is it possible? Sure, but is it plausable that they reach round 2? Not terribly.

I totally agree with Basketbawful's statement about them being put away wet. If there is a polar opposite to Marty Schottenheimer in the NBA, it's D'Antoni. Marty was Mr. Conservative, Mike is Mr. "Who gives a crap if my point guard has to lay on his back to stop spasms, run all you want". Unfortunately for Mike, he hasn't figured out yet that this isn't Dinosaurs and he cant get another Timmy if he kills this one.
4/02/2008 9:23 PM
Post a Comment
<< Home
Subscribe
RSS Feed
Mailing List