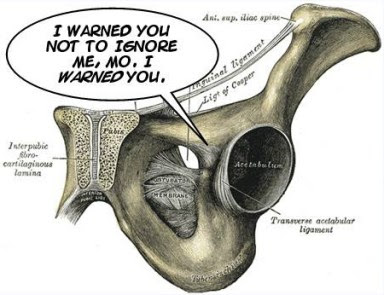 I received a few e-mails asking why I ignored the Milwaukee Bucks in yesterday's Worst of the Weekend post. The answer I gave was that the Bucks have fallen so far from grace this season that they'd have to do something really bad -- maybe even historically bad -- to get mentioned here. Well, I was wrong. Here's an e-mail from Basketbawful reader AirCanada:

"I was pretty disappointed to see that in yesterday's post there was no mention of Miwaukee's big (or more like forced) summer re-signing! None other than Sir Mo Williams, who missed the game against the Pacers with pubic symphysitis. (Editor's note: That's an injury to the pubic symphysis, which is a cartilaginous joint above the man region.) Here's a little Wiki-research: In males, the suspensory ligament of the penis attaches to the pubic symphysis. In females, the pubic symphysis is intimately close to the clitoris. Which could lead us to confirm what we've long suspected: Mo is like a lot of other NBA players (Jason Williams, Vince Carter, etc.): Just another big pussy!"

I don't know what to say. Uhm...wow? I would, however, really like to find out the exact details about how Mo injured his "pubic symphysis." Not because I'm some drooling pervert who wants to discover the dark secrets of an NBA player's groinal activity (I'm strictly a non-drooling pervert). I'd just like to avoid injuring my various upper-penile cartilaginous joints. It sounds wicked painful.

Update! More super-sleuthing from Basketbawful reader Mithat, who -- unlike me -- can read an entire Wikipedia entry in one sitting. "I think Mo is not a pussy but his dick is small. Check the second paragraph below (from Wiki by the way)."

"Surgically cutting [the pubic symphysis] allows more of the penis to hang outside the body, thereby increasing its length. The ligament is then encouraged to heal in an extended state, promoting a longer penis overall. Until this ligament is properly healed, the penis cannot achieve a high angle of erection when engorged."

Well, there you have it. Mystery solved. Mo just wants a little more length to please the ladies with. (Or the boys. We don't judge or discriminate here, unless you're named "Kobe.") There's no crime in that. Although I'm sure the Bucks would have preferred for him to wait until after the season was over. Now if you'll excuse me, I've got a surgery to schedule.

stephanie g said...
Hopefully the rehabilitation isn't too hard on him.

It'd be too bad if this shrank his career.

I hope this injury doesn't leave him stiff.

Um...it's always nice to read about deep genital injuries. Speaking of educational, everyone knows that the various organs between men and women are basically the same, i.e. homologous? That is to say they develop from the same tissue in the womb and have the same nerves and everything...so a penis is really just a big, awkward clitoris (which is actually fairly large although mostly hidden, if one cares to look at the linked Wiki page). This also includes testicles/ovaries, scrotum/labia, and men have a very small organ which would be a uterus if they were a girl.

m. Alana said...
Oh, dude, I loved learning about that joint in high school Anatomy. It's a joint that's only used once (or a few times) in one's life, in childbirth. And only by girls, obviously, though boys have them too. Nature provides for so much, doesn't it?

And Stephanie, your information was quite interesting and informative - I had no idea that men had not!uterii! But the penis is not exactly analogous to the clitoris, because the penis (while a sexual organ) is used to pass urine, and the clitoris is not. The clitoris is the only human organ, male or female, with no function at all other than good times - the female urethra is actually a little below it. So yeah, no liquid at all comes out of the clitoris, not even during female ejaculation (wherein the fluid comes instead from a tiny, usually invisible hole a bit below the urethra). I know you said homologous and not analogous, but I think it's an important distinction.

Sorry for that random anatomical highjack, basketbawful at large.

More on topic: that ligament-cutting thing profoundly disturbs me. No sharp things near fun place plzkthx.

stephanie g said...
m. alana I certainly hope everyone knows that women don't pee out their clitoris. Maybe some ignorant men don't...but the readers of this site are quite knowledgeable about this sorta thing, right?

But yeah, clitoris, penis, many other things. Comes from the same tissue. Just develops differently in the womb. Here's a fun list of them: