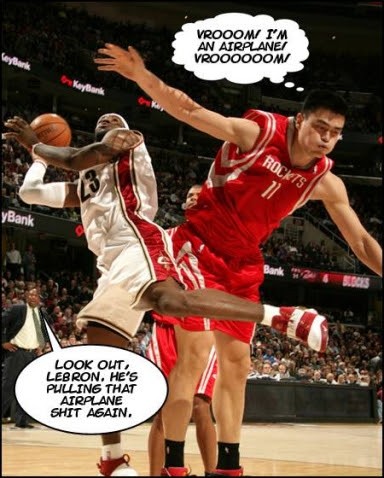 Yao Ming: Shaquie Chan shot just 3-for-17 against the imposing defense of...Zydrunas Ilgauskas. Which means a traffic cone probably could have held him to 2-for-17 shooting.

Tracy McGrady: Wasn't he supposed to be resting over the All-Star break? That 6-for-21 shooting line suggests that T-Mac must have spent the weekend at Camp CHEN-A-WANDA.

LeBron James: Bron Bron had a triple double (26 points, 13 rebounds, 11 assists), but his 0-for-7 first half shooting put the Cavs in a pretty big hole. And they didn't recover.

The New York Knicks: Zach Randolph threw a cup of water at Nate Robinson. Nate then threw a towel at Zach. In other words, it was just another night at the office for Team Dysfunction. Rather than disciplining his players, coach Isiah Thomas praised their "feistiness" and "nastiness," which is kind of like praising your crazy ex-girlfriend's "passion" after she burns down your apartment building. Amazingly, the Knicks transformed their malaise into a 113-100 overtime win, proving that, at least once in a while, insanity works.


The Washington Wizards: You know that Knicks victory I was just talking about? It was gift-wrapped and delivered with a card signed "The Wizards." Too bad coach Eddie Jordan wasn't in a giving mood. "It's just unacceptable, our approach to the game. We just didn't play hard enough. We didn't play with a lot of purpose, and maybe we thought they were just going to give us the game, and it was just the opposite. There was just no enthusiasm." There also was no Caron Butler or Gilbert Arenas. That might have had a little something to do with it.

Eddy Curry: [Spoiler Alert!!] Remember how at the end of The Sixth Sense we finally found out that Bruce Willis had been a ghost the whole time? I think the same thing is going to happen with Eddy Curry at the end of this season. Curry started the game, but played only 15 minutes and scored 4 points (1-for-4). I guess he just wasn't feisty or nasty enough for his coach. Time to start throwing things, Eddy.

The Detroit Pistons: It was a rough night in the Motor City. Detroit's starters combined to shoot 19-for-49, and the Pistons got blown out at home by the Magic. Now, I ask you, is that any way to reward Bon Jovi for coming out to the game?

Dwight Howard: Superman must have left his cape in New Orleans. Howard scored ony 8 points 2-for-9) and committed 6 turnovers. He was a monster on defense, though.

The Philadelphia 76ers: Getting blown out by the Minnesota Timberwolves definitely qualifies for Worst of the Night status.

Antoine Walker: The former NBA champion - okay, I just threw up in my mouth a little - played 8 minutes and scored zero points on 0-for-3 shooting.

Gerald Green: Some Minnesota fans - most of whom will probably never have sex with a woman without the use of a major credict card - saluted Green's now famous cupcake dunk. Too bad Green never got off the bench. For all you stat geeks out there, that means he played 8 fewer minutes than Antoine Walker.

Tim Duncan: Timmah! must must have had something in his eye last night - like a water buffalo - because he couldn't have wished the ball into the basket (2-for-12). Fortunately for Tim and the Spurs, they were playing the Bobcats.

Gerald Wallace: Mr. Wallace showed everybody why he was left off the All-Star Team by scoring 4 points on 0-for-9 shooting. Those are Brad Lohaus numbers.

The Golden State Defense: The Jazz dropped 77 points on the Warriors during the first two quarters, and that total was a mere six points off of Utah's franchise record for a half. The Jazzercizers shot 68 in that first half - and 53 percent for the game - on their way to putting up 119 points. Said Baron Davis: "Our motto is keep the score tight and keep the game as close as possible and under double-digits going into the fourth quarter. We weren't able to do that tonight." Uh, yeah. I think it's time for a new team motto, Baron.

Jarron Collins: You can call him Mr. Two Trillion.

Kwame Brown: His stat line: 1 DNP-CD. And to think they only had to give up Pau Gasol to get him...what a bargain!

Kevin Durant: Hm. He came back from N'awlins with flu-like symptoms. Okay, suuuuuure.

The Boston defense: Their defense - which normally holds opponents to 90 PPG on 42 percent shooting - is the number one reason they have a league-best 41-10 record. But why live off your bread and butter when you can get into a shootout with a high-scoring team on the road? Oh, right, because that would be totally stupid. Still, that's exactly what the Celtics did, giving up 51 percent shooting to a team with Allen Iverson on it and losing 124-118. Said coach Doc Rivers: "We didn't want to get into an offensive shootout." Oh, right. And I guess the coach has nothing whatsoever to do with that.

Bennie Adams: Just what the NBA needs - another rogue official. Adams called Carmelo Anthony for goaltending when he jumped up to grab a three-point airball by Ray Allen. That ridiculous call cut the Denver lead to 121-118 with 13 seconds remaining. As you can probably imagine, Nuggets coach George Karl was a wee bit upset about the call. "Wow. He (Adams) likes making big calls and bad calls at the end of the game. How can you call goaltending when the ball is halfway below the rim?" Not that Karl had much room to talk. His team was gifted with a season-high 49 freethrow attempts, 21 more than the Celtics got.

Kevin Garnett: KG was juiced up after his nine-game vacation. "It was good to get back. It felt good. I felt like I was 27. I felt young." Of course, he didn't play as well as he claimed to have felt: 4 points (2-for-7), 8 rebounds, and 4 turnovers. When asked to appraise Garnett's performance, coach Doc Rivers said, "Not very good." But he felt young, Doc!

John Salmons: Even with Mike Bibby in Atlanta, Salmons remains the forgotten man in Sacramento: Zero points (0-for-3) in 18 minutes of "lacktion." [Hat tip to Tonewise]

Mike Bibby: He joined up with his new team to a resounding poop noise, scoring 5 points (1-for-5), grabbing zero rebounds, dishing 3 assists, and committing a couple turnovers in 16 minutes. Derek Fisher shut his ass down, man!

Update - Atlanta Hawks: Basketbawful reader Wild Yams made a good point in the comments section: "How can the Hawks as a team not be up for yesterday's worst? In the first half yesterday (some of which was officially not 'garbage time'), the Hawks went through a stretch from the six minute mark of the 1st quarter till just before the half where they were outscored 56-16 by the Lakers, culminating in a 41 point lead at one point. That's a 41 point lead in the first half! Before the Hawks hit three 3-pt shots in the last minute of the half, the lead was 69-28, and at the half the Hawks had at least 19 turnovers. If that isn't awful, I don't know what is." Mr. Yams, you are absolutely right. 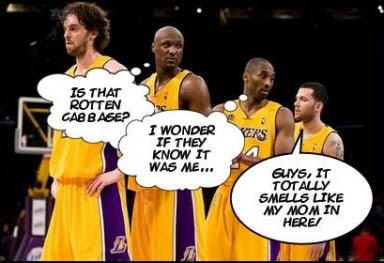 Wild Yams said...
How can the Hawks as a team not be up for yesterday's worst? In the first half yesterday (some of which was officially not "garbage time"), the Hawks went through a stretch from the six minute mark of the 1st quarter till just before the half where they were outscored 56-16 by the Lakers, culminating in a 41 point lead at one point. That's a 41 point lead in the first half! Before the Hawks hit three 3-pt shots in the last minute of the half, the lead was 69-28, and at the half the Hawks had at least 19 turnovers. If that isn't awful, I don't know what is.
2/20/2008 11:28 AM

Basketbawful said...
anonymous - That's true. However, this was kind of an in-joke that only I would get. I had an English teacher in 8th grade that used to, and I'm being totally serious here, climb up on his desk and go, "Vrooom, I'm an airplane, vrooom!" then jump off the desk and run around the class. Good old Mr. Dugdale, that crazy mother fucker.
2/20/2008 1:18 PM

Tonewise said...
hahah man that LA-ATL game was paaaaaainful to watch... I re-tuned in for the third just to see if AL Kobe and any other relevant fantasy starters were going to see much more burn, other than that ...wow!

Anonymous said...
May I respectfully disagree with your assessment of Big Z's defensive abilities?

Ilgauskas is actually a pretty capable defender. Indeed, the second best thing about the Cavs is their interior defense.

The problem with Z's defense is, well, that he's turtle-slow. But of course, Yao is glacier-slow, so I guess it figures Z guards him well.

stephanie g said...
One more BS thing about "flu-like symptoms": if you have the flu it's a pretty big deal. A lot of people say they have the flu but they really just have a cold or food poisoning or something. The flu will knock you on your ass for like a week, at least. It kills tens of thousands of people a year just in the U.S. But I guess "cold-like symptoms" doesn't sound as good for those press releases.
2/20/2008 7:09 PM
Post a Comment
<< Home
Subscribe
RSS Feed
Mailing List